By gum! The kilos fall away 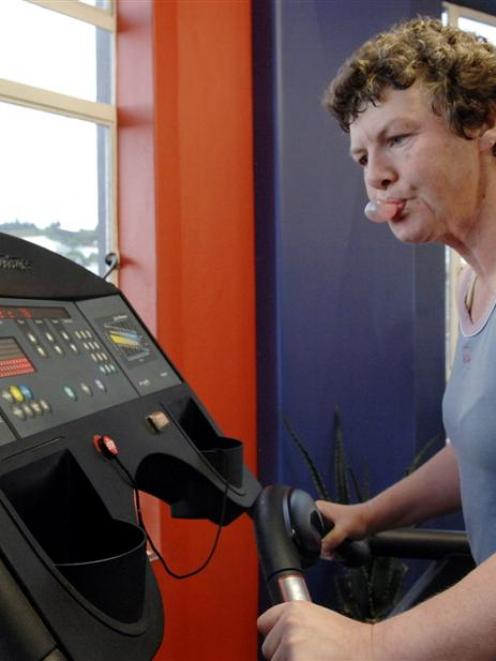 Maria Hamelink tests the theory on a treadmill at Creative Conditioning in Dunedin that chewing gum can help with weight loss. Photo by Linda Robertson.
Contestants on weight-loss competition shows like The Biggest Loser undergo all kinds of duress in their efforts to shed kilos.

Some of the ordeals they endure seem like sheer torture to me.

But there is one tiny weapon in The Biggest Loser arsenal that most of us might happily enlist in our own battles of the bulge: chewing gum.

The Losers chew lots of gum, but does it really help them lose weight? Probably, in its own small way.

But given the number of kilograms these contestants need to drop, chewing gum is not likely to make a huge difference to the outcome of their competition. For those of us who wage our wars against lesser weight, though, taking up gum-chewing might not be a bad idea.

There's actually a bit of scientific evidence showing that chewing gum helps fight fat in a number of ways.

It is important to note that much of the research regarding gum-chewing's role in weight management is sponsored by the Wrigley Science Institute, which is in turn funded by Wrigley, maker of Extra and many other chewing gums.

Gilbert Leveille, the institute's executive director, assures me that the gum-makers do not hold any sway over the scientists, whose primary goal is to "understand the fundamentals of the physiological effects of chewing gum".

Their work (which also investigates gum's role in stress management, oral health and mental concentration), he adds, is usually conducted under the auspices of such outside organisations as the Obesity Society.

In any case, the findings are not dramatic enough to send every pudgy person to the store seeking gum.

In short, the handful of gum studies so far suggest that chewing gum may help reduce cravings, particularly for sweet snacks, and spur people to cut their daily intake by about 50 calories.

The latest study, presented at the annual scientific meeting of the American Obesity Society in late October, showed that gum-chewing people consumed 67 fewer calories at lunch and did not compensate by eating more later in the day.

Many of the men in that study, which, like the others in the field, was small, said they felt less hungry after chewing gum. That last study made another contribution to our understanding of the physiology of gum-chewing: Not only do gum-chewers take in fewer calories, but they also burn more calories.

As Dr Leveille describes it, the study showed a "small but measurable increase in energy expenditure" among the gum-chewers.

And gum adds hardly any calories to your day: Sugar-free varieties have about five calories per stick, and even regular gum has only 10.

The combined effects of gum-chewing on weight management - the reduced calorie intake, increased calorie burning and distraction from potentially fattening foods that Dr Leveille says gum can offer - may not seem to add up to an awful lot compared with sweating it out on the treadmill and going on grapefruit diets.

But chewing gum may be in keeping with an emerging approach to weight management that calls for focusing on small changes rather than dramatic, hard-to-sustain weight-loss tactics.

In the November issue of the Journal of the American Dietetic Association, James O. Hill, professor of paediatrics and medicine and director of the Centre for Human Nutrition at the University of Colorado/Denver, argues that so far, despite all the attention paid to diet, nutrition and obesity, nobody has come up with an effective way to help most people maintain weight loss.

Prof Hill suggests that small changes, such as consuming 100 fewer calories per day, can curb weight gain among overweight and obese people and that such changes are easy for most people to sustain.

In light of such a "small changes" approach, maybe popping a piece of gum in your mouth now and then is a good idea.

Especially if it takes the place of a Snickers bar.