Pedometers: a step toward weight loss and fitness 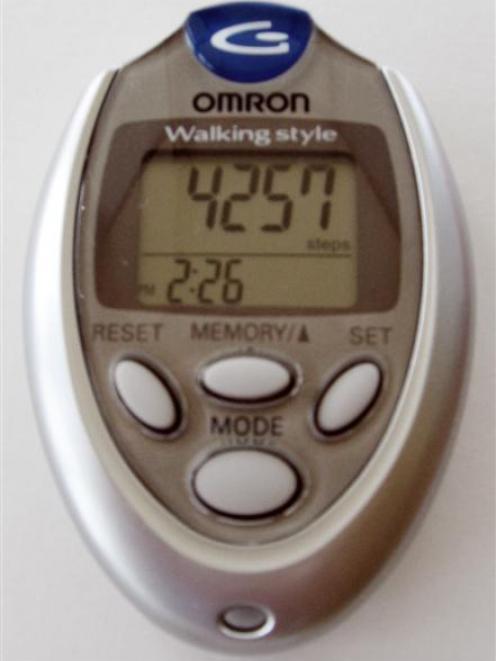 pedometers_a_step_toward_weight_loss_and_fitness_1642328140.JPG
What if there were a small, inexpensive device that was proven to boost your fitness, help you lose weight and lower your blood pressure? Would you use it, especially if doing so was nearly effortless? Jane Bonin does.

She has for the past eight months and swears by it.

"It's just a way of tricking yourself into doing the right thing," says the 73-year-old writer and former college professor who lives in Washington.

Thousands of people use them, but buying a pedometer is not the first - or second, or third - piece of advice you typically receive when you turn to someone and say: "I really need to get in shape, but I hate exercising. What should I do?"

But it probably should be, says Dena Bravata, a physician and senior research scientist at Stanford who analysed 26 studies of pedometer use and found clear evidence that people who have them get more exercise, lose weight and lower their blood pressure.

In fact, the decrease in blood pressure was equivalent to results achieved through much more expensive interventions that involve doctors and pharmacists, she says.

And in a relatively short time, many people were able to lower their body mass index enough to move from the "obese" to "overweight" category.

"What we found was, on average, that wearing a pedometer increased people's physical activity by about 2000 steps per day," Dr Bravata says.  "That's equivalent to about a mile."

There is little dispute that walking is one of the best, cheapest and easiest things you can do for your health, especially if you're older than 50.

And there is equally little disagreement that most people don't do enough of it.

For many, a pedometer helps break through psychological barriers by providing motivation, accountability and a sense of control, according to Dr Bravata and people who use the devices. As a rule, people overestimate the amount of exercise they get.

Keeping track can be eye-opening.

"I have walked the corridors of this building many a night, trying to work off my last steps," says Ms Bonin, whose goal is 10,000 steps a day, or about 8km. A pedometer allows you to make quick, beneficial changes, Dr Bravata says.

"You can diet like mad, exercise like mad all day long, and tomorrow morning, it's unlikely you would have made a significant difference", she says.

In contrast, if you attach a pedometer to your hip and take a reading of your baseline walking distance, tomorrow you can increase that distance, sometimes significantly.

It's important to keep your results in a log or diary, as anyone who has tried to stick to a diet can attest.

You'll discern patterns, good and bad, in your exercise routine.

Blank spots or days when you just can't squeeze in a walk provide added motivation.

"If you don't write it down, it's almost as if it didn't happen," says Ms Bonin, who also attends stretching classes and swims each week.

But the single most critical factor in employing a pedometer is setting a step goal, Dr Bravata says.

In fact, those who wore one but didn't set a goal did not increase their physical activity, she said.

Somehow, 10,000 steps has become the standard goal, although according to a 2004 article by Catrine Tudor-Locke, a researcher at Louisiana State University, there appears to be no science behind the figure.

Dr Tudor-Locke says it may stem from a promotion by pedometer companies in Japan.

Dr Bravata says the actual size of the goal isn't as important as setting one that will improve your health and keeping after it - by parking some distance from the office, taking the stairs or getting out for that lunchtime walk.

I wanted to see how difficult it would be to walk 10,000 steps in the course of my day, so I bought a pedometer for $21 at a sporting goods store.

I wore it on four consecutive days - not enough for a true test of its effectiveness - with mixed results.

On a fairly sedentary Saturday that featured a lot of football watching, I logged 7868 steps. (I didn't wear the pedometer on my morning run).

Sunday included trips to a grocery store and an hour of leaf work in the yard, for a total of 13,300 steps.

And Tuesday, spent largely in the office: 9667 steps. I'm certain these numbers are inflated, possibly by quite a bit, because the pedometer often credited me with steps when I shifted my weight in a chair.

Ms Bonin says more expensive models like hers don't do this.

They also can be connected to computers to download information quickly. There are still open questions about pedometer use.

I know people who became frustrated when they could not reach their goals and stopped wearing pedometers.

There is no good research about how long people stick with pedometer programmes and whether they maintain the associated health and fitness benefits.

Barbara Moore, executive director of Shape Up America!, says that walking must be coupled with changes in eating habits to truly achieve lasting weight loss and health benefits. But there seems to be little down side to giving this a try.

"The beauty of this programme," Ms Bonin says, "is its utter simplicity."