Around the mulberry bush 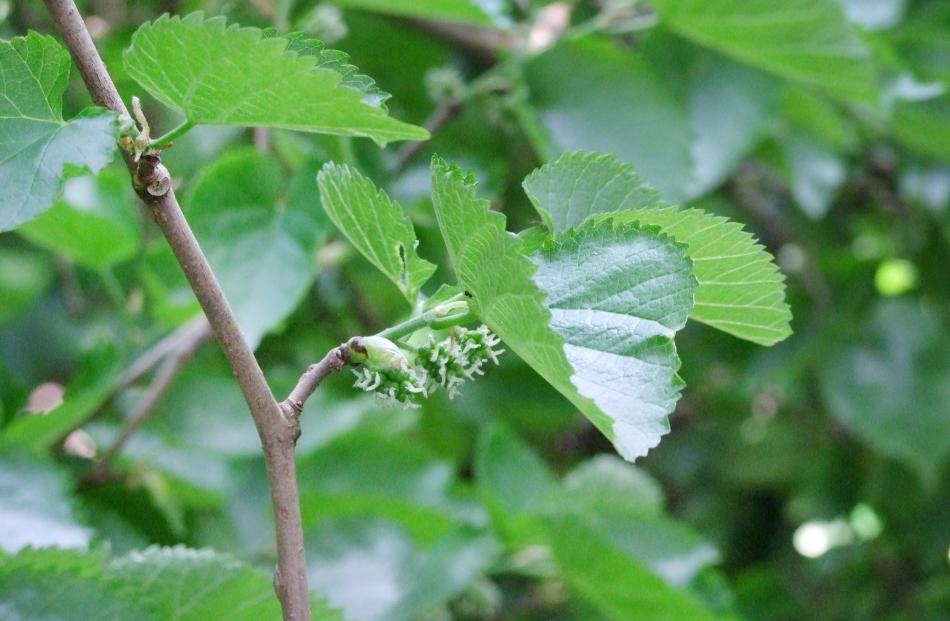 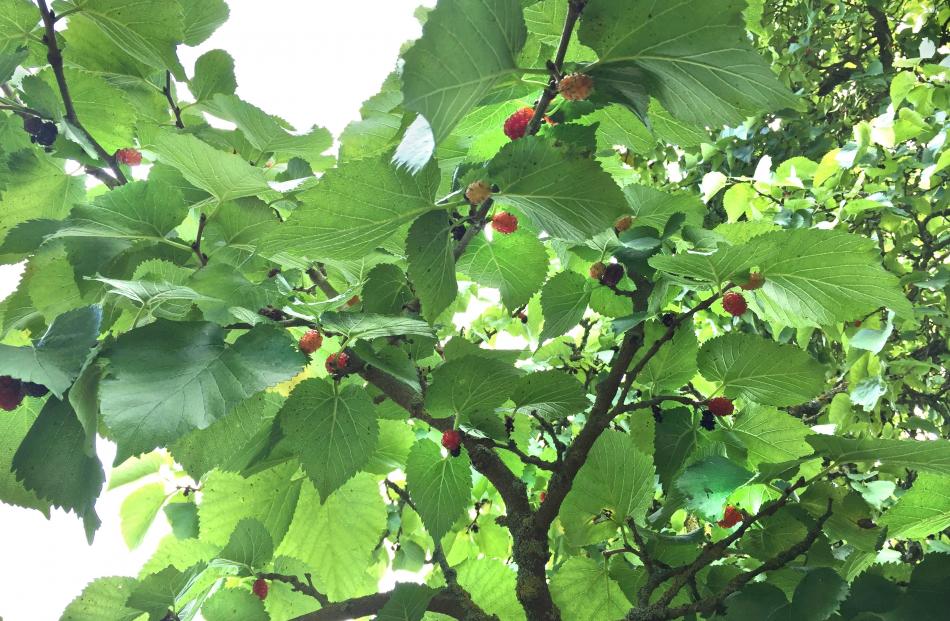 Mulberries ripen in succession, not all at once. Photo: Bettina Vine 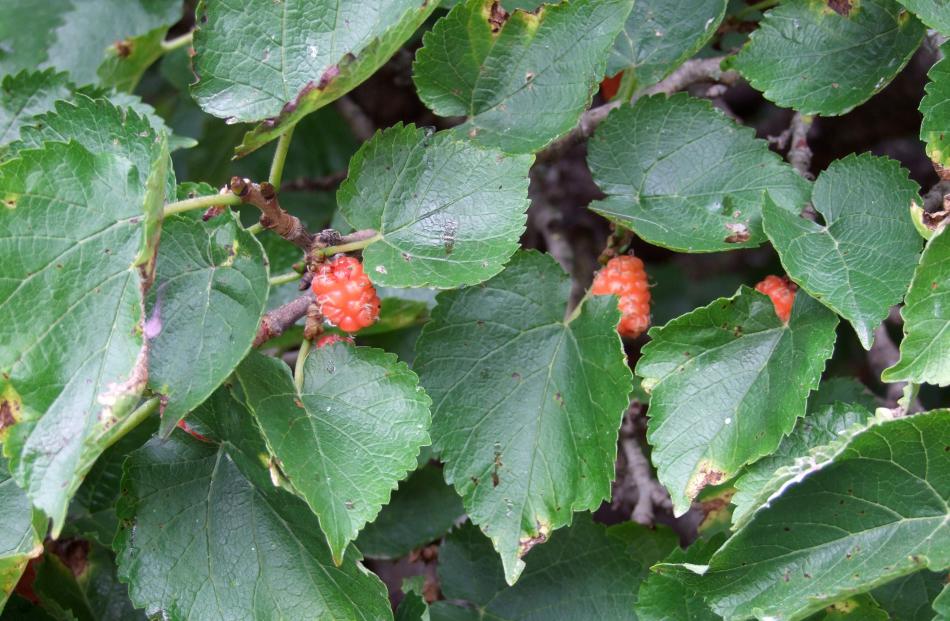 Wait for the fruit to be dark red or purple and ready to drop before harvesting. Photo: Gillian Vine 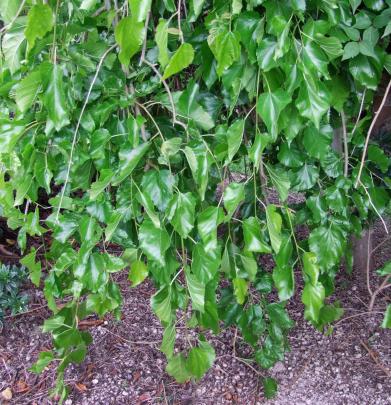 Despite the old rhyme, a mulberry is a tree, not a bush.

Its blackberry-like fruit is beginning to attract attention, thanks to the ever-growing demand for all kinds of berries.

Except occasionally at farmers' markets or roadside stalls, it is rare to see fresh mulberries for sale. That's possibly because the fruit doesn't last long off the tree, so, for those who fancy the delicious fruit, it's probably a matter of growing your own. Fortunately this is not too difficult and several New Zealand nurseries sell the trees. Nonetheless, canny commercial producers could be on to a good thing, as the handful of Australian growers of mulberries have demonstrated. 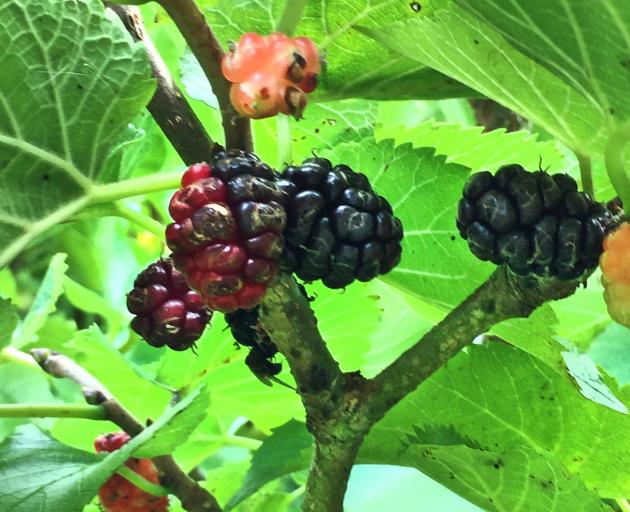 Mulberries look rather like blackberries but they are not related. Photo: Bettina Vine
There are two principal Asian species, the white mulberry (Morus alba) and the black (M. nigra). Silkworm caterpillars (Bombyx mori) like the softer leaves of the white version but are not enthusiastic about eating the black's tougher foliage, which is why M. alba has been grown in China for silkworm culture for some 5000 years. 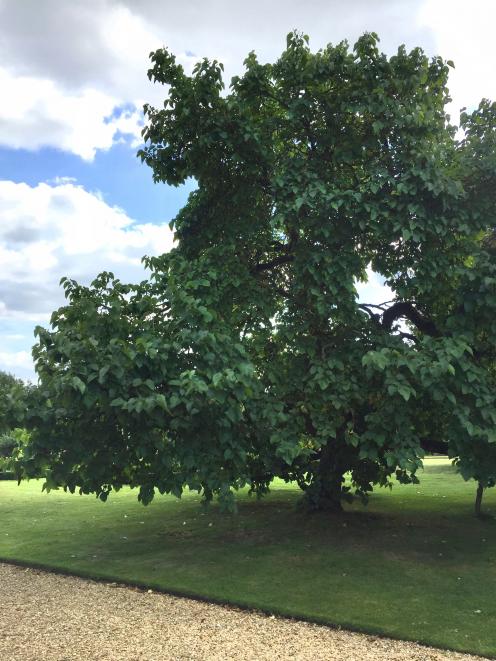 A mature black mulberry tree. Photo: Bettina Vine
It's the black that humans - and birds - like and mature trees can produce huge quantities. Mulberries live to a ripe old age with branches growing into irregular shapes that may need support.

Probably the original mulberries in England were planted in London by the Romans. The oldest now known in the city is at Syon Park, Middlesex. Planted in 1548 by botanist William Turner, it is not the only ancient mulberry around the city, as Turner's planting was followed by others. Many were the result of King James I's efforts to get an English silk industry under way and James oversaw the planting of 10,000 mulberries near where Buckingham Palace was built 150 years later.

Some of the king's trees have survived, but almost all those survivors are black mulberries, as James accidentally grew people food, not silkworm nosh, which must have been a factor in the industry's failure.

A similar failure occurred in New Zealand. By 1870, M. alba was being promoted as a host for silkworms, which apparently already had been imported. Here, although the mulberry species was correct, the silk industry never got off the ground, probably because of the distance from markets and the cheaper Chinese product.

Mulberries can be propagated by growing from seed, or taking cuttings from existing trees, but for faster results, buying a tree is the obvious answer.

M. nigra is the best for fruit, which is good eaten fresh or used for pies and jams. Expect to pay about $40 for a tree. Queenie is one of the few named cultivars available.

If you fancy trying your hand at silkworm rearing, or prefer the bland flavour of white mulberry fruit, M. alba is the one to choose. Pendula is a weeping form that makes an attractive specimen tree but is more expensive at about $70.

A third species, the red mulberry (M. rubra) is an American native occasionally available here: a hybrid of it and M. alba that has dark red fruit is marketed as Hicks Early.

All mulberries are deciduous, flower in spring and fruit ripens progressively from late summer. It is harvested when berries are fully ripe and ready to drop off the tree.

The trees tolerate most soils but dislike wet feet or drought, either of which can cause unripe fruit to drop. Although hardy, some frost cover of young trees is advisable. Stock and rabbits love the leaves and twigs, so in farm gardens, keep trees away from fence lines. Slugs and snails may attack flower buds.

Pruning will keep trees to manageable height, as left untouched they can reach 10m or more, making them unsuitable for very small gardens and definitely not for container growing unless you can source a dwarf variety. However, Pendula is much smaller at about 3m after 10 years.

One last word: black mulberries are spectacular at staining hands, mouths, clothing and - if they fall on them - paths. Don't say you haven't been warned.