Fertility the key for food forester 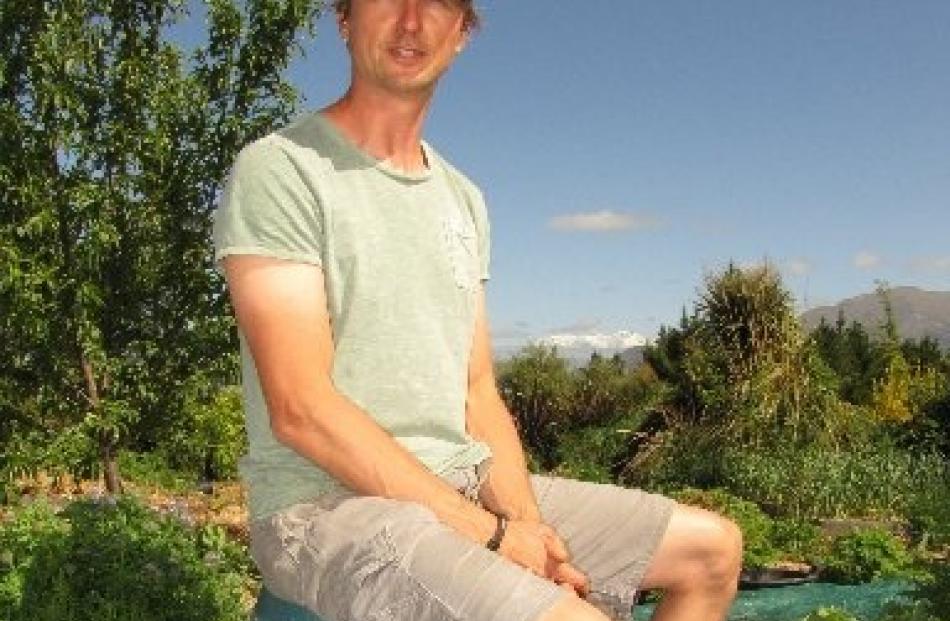 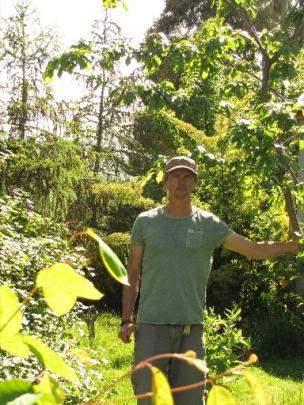 Mr Elms in the random collection of trees, shrubs and plants that make up his food forest. 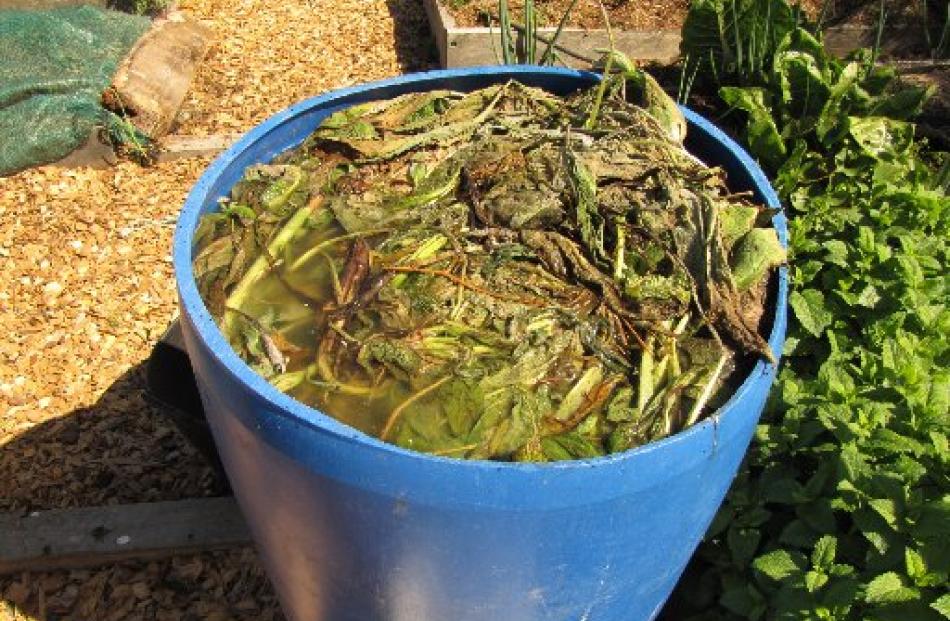 A bucket of weeds in water produce a liquid fertiliser tea. 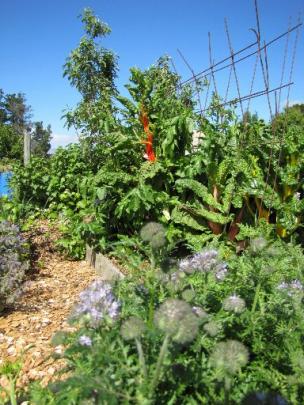 An eclectic mix of fruit and vegetables.

Growing vegetables or fruit in your own backyard has made a comeback. Mark Price learns how it's done.

Neat is out and random is in.

That at least is the impression you get when you first set foot in a ''food forest''.

Carefully manicured lawns, carrots and cabbages in neat weed-free rows and separate areas for berries and fruit trees are not what food forests are about.

What is more important is the soil and the interaction between different plant species - the idea being to create a multi-layered, sustainable food forest; a cornucopia of healthy food.

Ben Elms, of Hawea Flat, does not claim to be the first in the South to set out on the food forest trail.

Robyn and Robert Guyton, of Riverton, in Southland, seem to hold that title.

But, on his 20ha block at Hawea Flat he is making a start - his focus primarily on creating the best possible growing environment for his fruit trees and vegetables.

Fertility's the key. Lots of manures. Lots of compost, he says.

And Mr Elms - known as ''Dr Compost'' - says the best starting point is not necessarily to buy bags of cheap compost.

He suggests buying manure from the side of the road but here, too, buyers should be wary.

''You have got to be careful that their animals haven't been wormed.

''Ideally you don't want to get that manure because that will kill your worms.''

Mr Elms' first fruit trees were salvaged with a digger from a Cromwell orchard being converted to a vineyard.

''I didn't really know much then about fruit trees. I just stuck them in the ground; no love; no nothing.

''Now, many years later, they are some of my most productive trees.''

Mr Elms says in retrospect he would probably now load up the hole the trees were to go into with compost, and prune them ''not so brutally''.

Mr Elms moved from a 0.2ha section to his lifestyle block 14 years ago and found the change ''very overwhelming''.

''So a lot of hit and miss; a lot of trying to do stuff on the cheap, infrastructure-wise. That will just come back and bite you.''

As an example, Mr Elms says he was given a couple of young bulls in exchange for grazing, and with a lack of good fencing, found them to be a very stressful experience.

''One bull would see a cow and he would just jump into the neighbouring property. And the neighbour would naturally go nuts.''

At that time there were no courses for ''lifestylers'' and he learned by his mistakes.

He has progressively increased the size of his garden by creating raised beds of compost on top of the lawn. His first crop is usually new potatoes.

''Slowly but surely I expanded my garden in that way.

''The compost heaps were my tool - rather than me digging up the soil.''

Mr Elms says the key to such ''no dig'' gardens was dealing with the paths. Grass paths are likely to contain couch, which will find its way into the beds.

After five or six years he moves the decomposed woodchips from his paths into his garden beds and creates new woodchip paths.

While he did not advocate concrete paths, he recognised they had benefits such as holding heat in the soil and being weed free.

Mr Elms is a great fan of growing comfrey which is high in potassium, phosphorous and minerals.

''It's a great companion plant to fruit trees. It brings in the bees and beneficial insects.''

''It's a glorified orchard in a way except you are taking it much further. The goal is that you haven't got to do too much in it.

''The idea is, you could walk away from it.

Ben Elms' tips
- Grow herbs and vegetables close to the kitchen. That way they are more likely to be well-tended, and used in their prime.
- Plant self-seeding aniseed-flavoured chervil once and you will never have to plant it again.
- Goats without testicles do not smell so bad.
- Not only are hazel nuts good to eat, the suckers produced by the plant are useful as garden stakes.
- Place potatoes on ''really'' wilted comfrey leaves when planting, to add nutrients.
- Grow carrots and onions adjacent to each other so the onions discourage carrot fly. And, if that does not work, try Neem granules; also useful to ward off white cabbage butterfly.
- Weedmat is not a long-term solution to weeds. Weeds will grow on top.
- Couch: ''There is no easy solution. I would encourage you to enjoy weeds. A lot of weeds are a sign of what's missing in the soil.''
- Throw weeds (and comfrey) in a bucket of water to produce ''free liquid tea'' for plants.