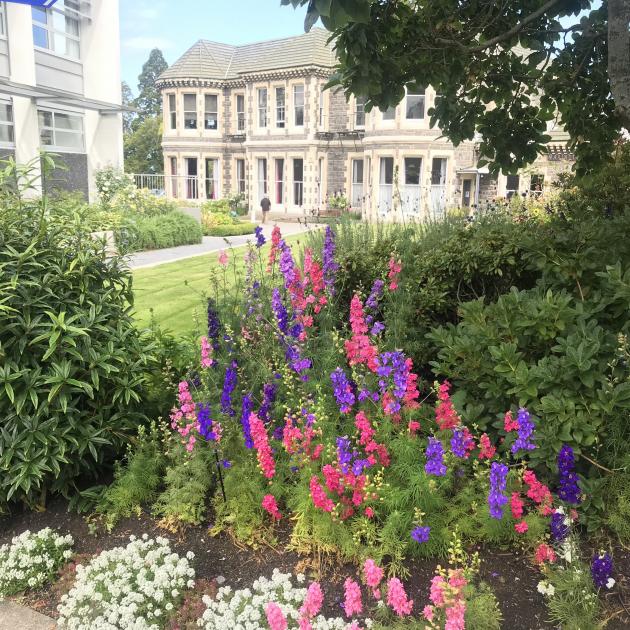 Bright larkspurs with the original bluestone homestead in the background.
Gillian Vine gets a buzz from a hospital visit. 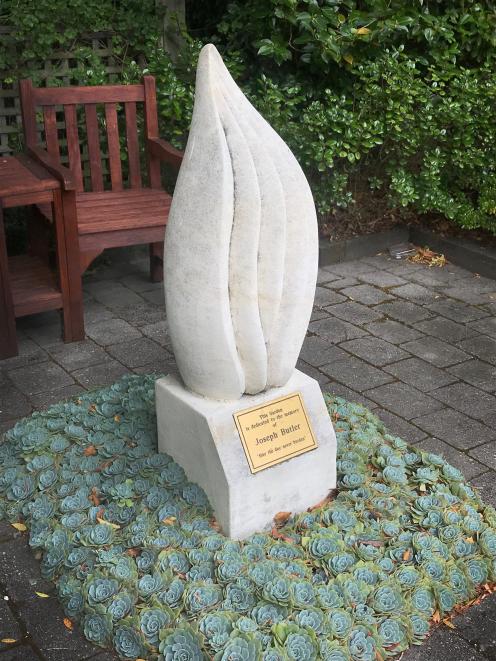 Hardy sempervivums are a well-mannered groundcover at the base of the Joseph Butler memorial sculpture.
Whether the reason is to have a blood test, hearing check, surgery or to visit a patient, chances are that the gardens at Dunedin’s Mercy Hospital have caught your eye.

In 1960, the Sisters of Mercy bought Marinoto from the Otago Hospital Board, which had owned the Newington Ave property since 1947.

For 30 years the home of Sir Percy Sargood, governing director of clothing and textile company Sargood Son & Ewing, the 1878 bluestone house was set in 4ha of grounds, ideal for the Sisters’ plan to expand, as their Mater Misericordiae Hospital in Royal Tce had become too small.

They retained many original features, among them some 20 notable trees like a huge pohutukawa, cork oak, sequoias and a massive copper beech. The grounds around the new hospital, opened in 1969, were maintained and kept looking attractive year-round. Older readers may recall nuns in blue habits busily weeding.

These days, it’s gardener Emma Paul’s domain, including planning to make the area surrounding the new car park attractive as well as fitting into the overall design. 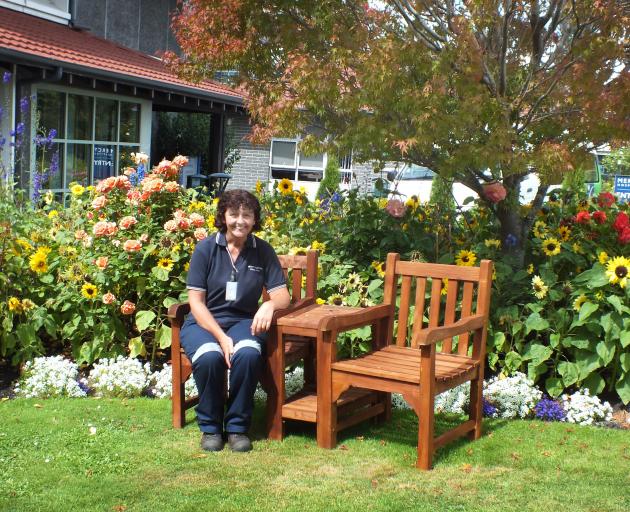 The only permanent gardener at Mercy Hospital, Emma Paul takes a seat, a rare occurrence during her working day. The sunflowers behind her are the Music Box variety.
Emma’s gardening career began at the Dunedin Botanic Garden, where she spent four years. 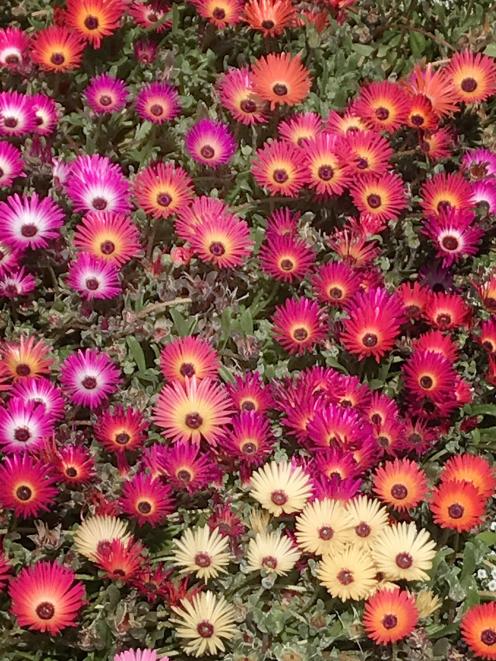 Livingstone daisies near the hospital entrance.
“That gave me a good grounding in all aspects of horticulture,” she says.

After completing her apprenticeship, she worked on three estates in England. One was Levens Hall, in Cumbria, where Emma clipped her way around the world’s oldest topiary garden, a high-maintenance role she describes as “fantastic”.

Five years ago, when Paul Reeder retired, Emma came to Mercy. Although contractors trim the trees and hedges, and help with heavy jobs, she does the bulk of the work.

“When the hospital was looking at developing a 10-year plan, to have a gardener like me with broad knowledge and experience fitted the bill for the future,” she explains.

“It also involved updating and simplifying the overall look of the grounds and making more appropriate use of plants.

“First up was maintaining it and bringing [the gardens] up to a higher standard.” 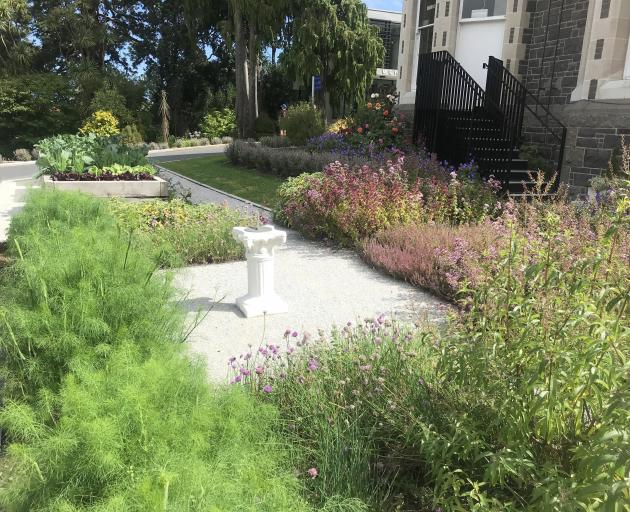 Herbs are grown to supply the hospital kitchen.
Bedding plants are placed to “lift people’s mood”, so during the summer and autumn old roses and dahlias in the perennial beds are supplemented by the likes of penstemon, larkspur and petunias. This summer, a long bed alongside the walkway from the car park was filled with Music Box sunflowers. A shorter (80cm-1m) variety that comes in a mix of colours, the flowers are borne on sturdy stems. 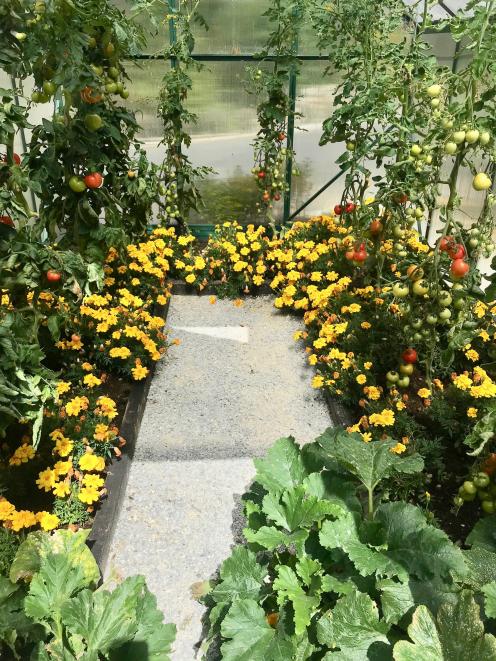 The greenhouse is packed with edibles, plus marigold to keep bugs away. PHOTOS: GILLIAN VINE
Smaller beds are packed with bright colours and two eye-catchers this season were Livingstone daisies and painted tongues (Salpiglossis sinuata), the latter a bedding annual that did particularly well at Mercy.

On this principle, she has packed in a common sempervivum succulent at the base of the sculpture in the quiet Joseph Butler memorial area and also under two trees where most groundcovers would struggle.

Emma’s biggest challenge to date has been landscaping around the revamped car park, built in 2018. Magnolias and a flowering cherry were lifted and stored while construction was under way. They then were returned to the surrounding garden, whose function is to screen the car park.

With that screening in mind, Emma opted for a line of trunked up (pleached) English hornbeams (Carpinus betula Fastigiata). Now two years old, they have grown about a metre and “are knitting together nicely”. 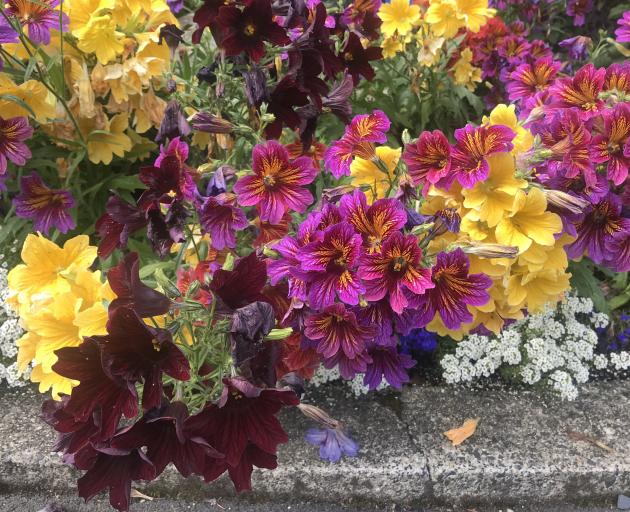 Vivid painted tongues (Salpiglossis sinuata) make an excellent summer bedding display outside the Marinoto complex.
Because it would be awkward to mow under the hornbeams, Emma opted for New Zealand Leptinella squalida Platts Black instead of grass.

“It’s the ideal groundcover and stays [purple] in winter.”

Visitors asked so often what the combination was that she made labels for the hornbeams and Leptinella.

Sterile holly runs along the Burwood Ave edge of the car park— “it still has berries but no prickles, so it’s people friendly” — and flaxes edge the path to the day-surgery unit, Manaaki. 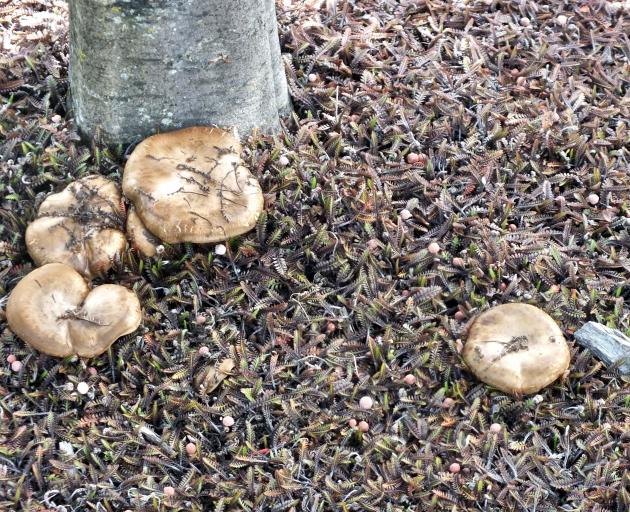 So many people asked the name that Emma made a sign for this native groundcover Leptinella Platts Black.
A part of the garden caters for the hospital kitchen: in raised beds by the old homestead Emma grows herbs and vegetables requested by the chefs, as well as Trusty Tom tomatoes in an adjacent glasshouse.

There is also an orchard area that she would like to expand and a natural bush area, too.

“It’s a really special garden. I’m lucky to be here,” she says.