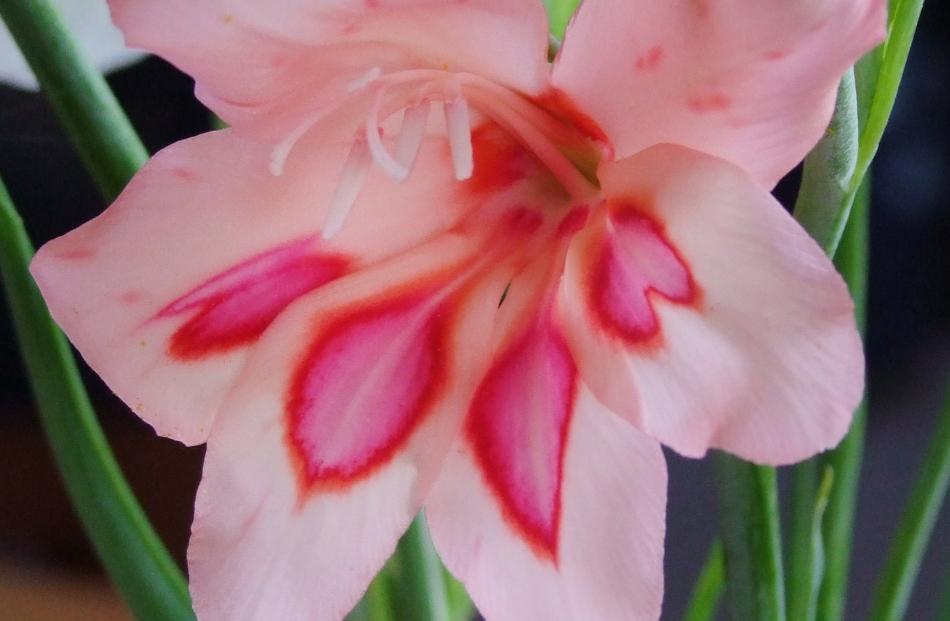 Most of the nanus group have teardrop markings. Photos: Gillian Vine

Nori is a study in contrasts. 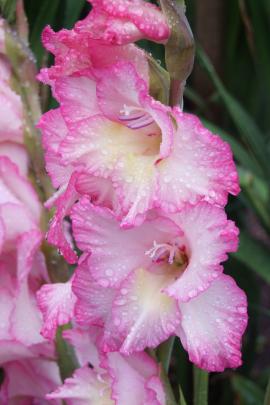 Priscilla is a popular bicolour variety. 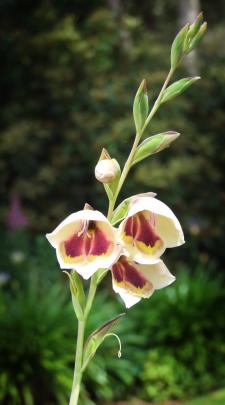 Like many gladioli species, G. papilio is a South African native. 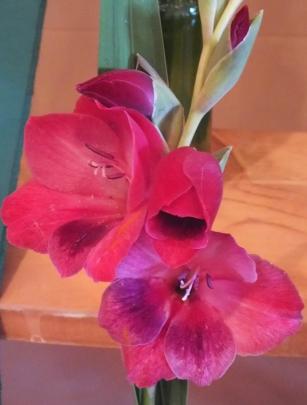 Most bulbs flower in spring, but gladioli wait until summer or early autumn before blooming.

They have numerous attributes, being easy-to-grow hardy chaps that may attract thrips but are generally disease-free.

Thanks to hybridisation, there is a really impressive colour range — pure white, cream, yellow, scarlet, crimson, pink, purple, mauve, chocolate and even green.

There are lovely two-toned varieties, too, like popular Priscilla (pink and white), Mon Amour (pink and cream), Nori (lavender and white) and Cayenne (dark and lighter red). 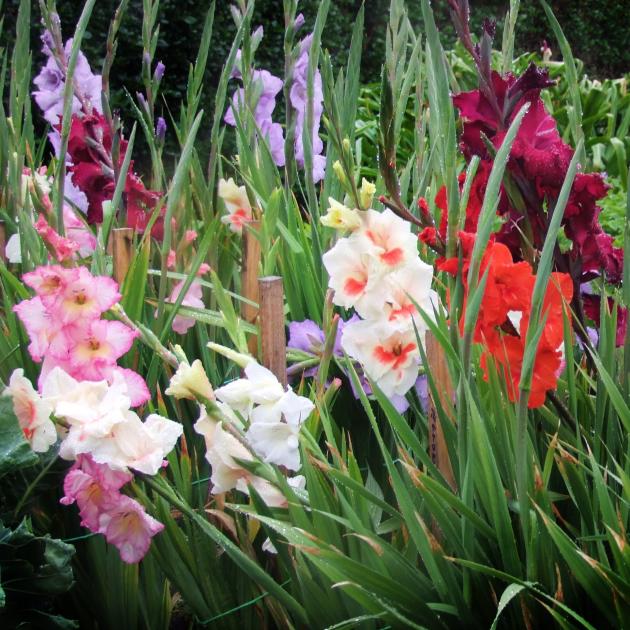 A patch of gladioli in a Dunedin garden. Photo: Gillian Vine
These tall hybrids have flower stems of 1m or more but if you want something smaller or earlier blooming, the painted ladies or nanus group (Gladiolus x colvillei) are spring-flowering lovelies that grow 45cm-70cm. Most sought after is The Bride, which is pure white, but most of this group - like pink Nymph - have contrasting teardrop markings.

Sometimes seen is a red one, referred to as The Bridegroom, which may be the original hybrid of G. tristis and G. cardinalis, which was the origin of the nanus group.

Of the 300 or so species, two are fairly common in New Zealand. Alas, the wavy-flowered gladiolus (G. undulatus), with its greenish white flowers, is now regarded as a pest in the Auckland region.

The second is the goldblotch gladiolus (G. papillo), which has hooded flowers in muddy cream and dull purple markings. It has underground runners, so can pop up where it isn’t supposed to be. Momona grower Margaret Muir has successfully crossed G. papilio with garden gladioli, resulting in an attractive red-flowered hybrid.

The word gladiolus comes from “gladius”, meaning a sword, and refers to the leaf shape.

As already noted, “glads” are easy to grow, although they love sunshine, a nod to their Mediterranean and South African ancestry. Light soil, enriched with compost, suits them best and taller types will need staking, as the roots are shallow and wind will knock them over.

Corm of the taller types can be planted from now until Christmas; staggered planting gives longer displays of flowers.

In autumn, when the leaves have died, lift the plants on a dry day. Cut off about two-thirds of the foliage but do not remove it completely and save the baby corms (“spawn”) from around the parent.

Put each plant into a paper bag - not plastic, which will rot the corm - on which the variety and/or colour is written. Hang it in a dry place and store until planting time. In spring, take off the dead foliage and the dried base and replant.

Spawn is planted without peeling and most should flower within a couple of seasons.

As well as looking lovely en masse in the garden or in pots, gladioli are good flowers for cutting. The only mystery is why they went out of favour until four or five years ago.