On a grand scale 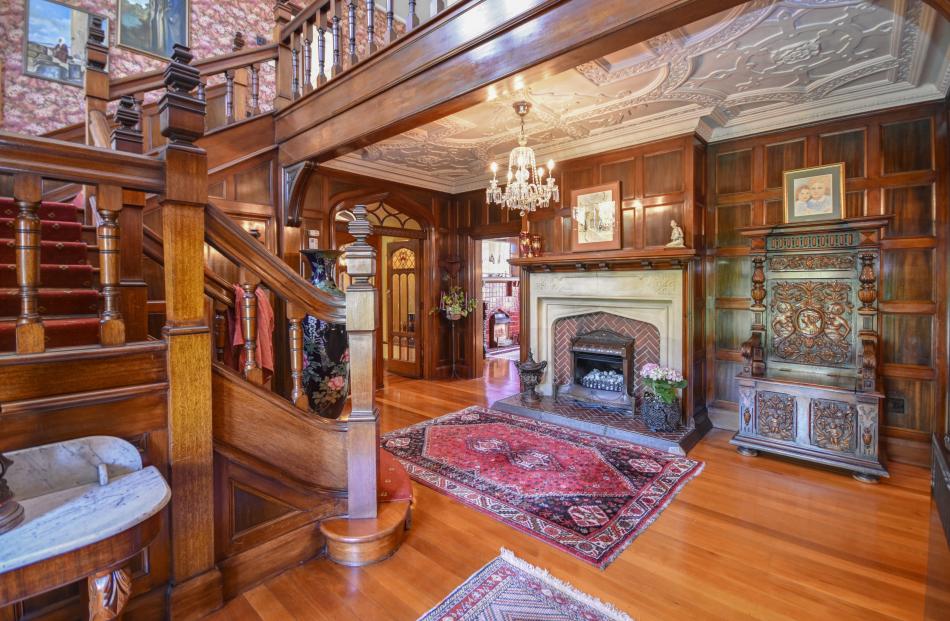 The fireplace in the entrance hall once ran on reticulated gas, but has since been converted to LPG. The tall carved chair that the Farry children dubbed "the throne" was bought with the house. 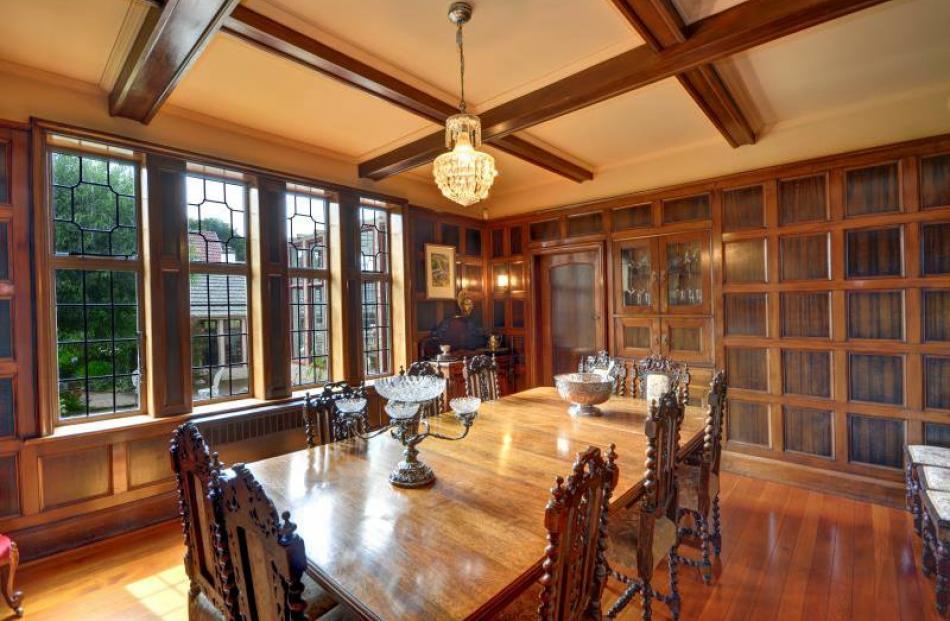 The dining table came from a board room in Oamaru. Small doors in the panelled wall allow dishes to tbe passed through from the adjacent servery. 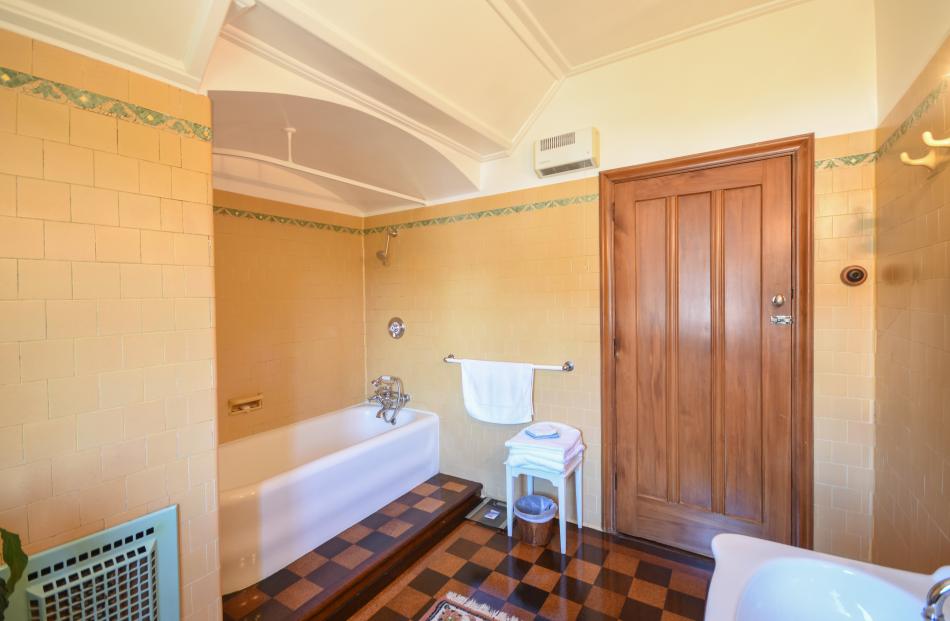 This bathroom, one of three in the house, still has its original bath and yellow tiles. 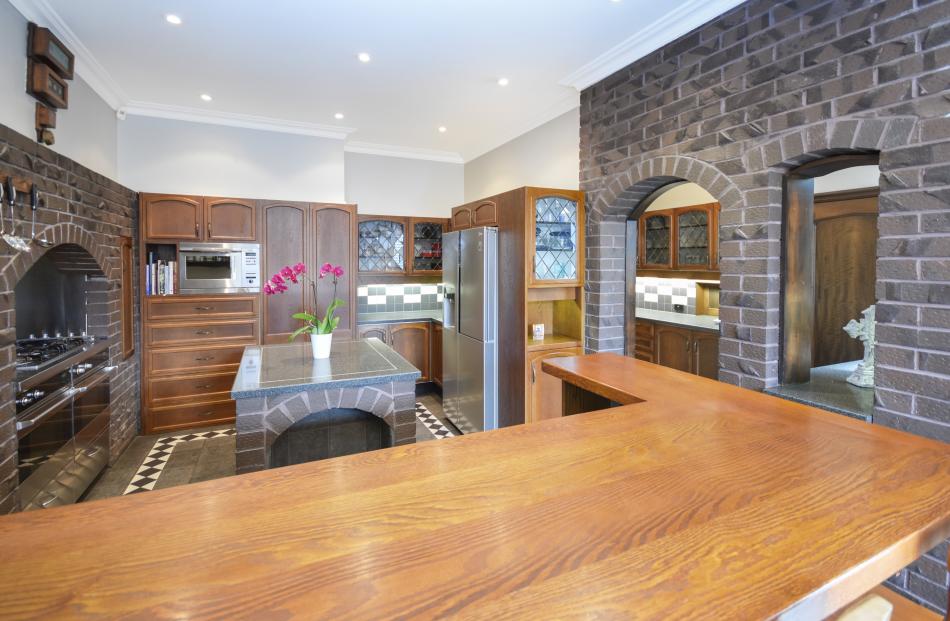 Call bells remain on one of the kitchen walls, but it has been many years since there were any staff to answer them. 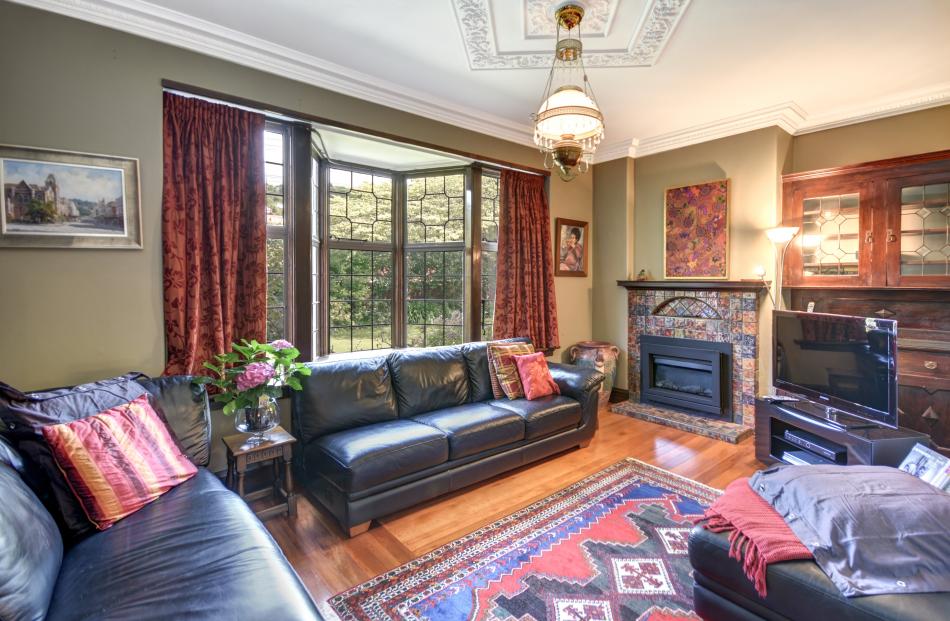 A smaller lounge serves as a television room. 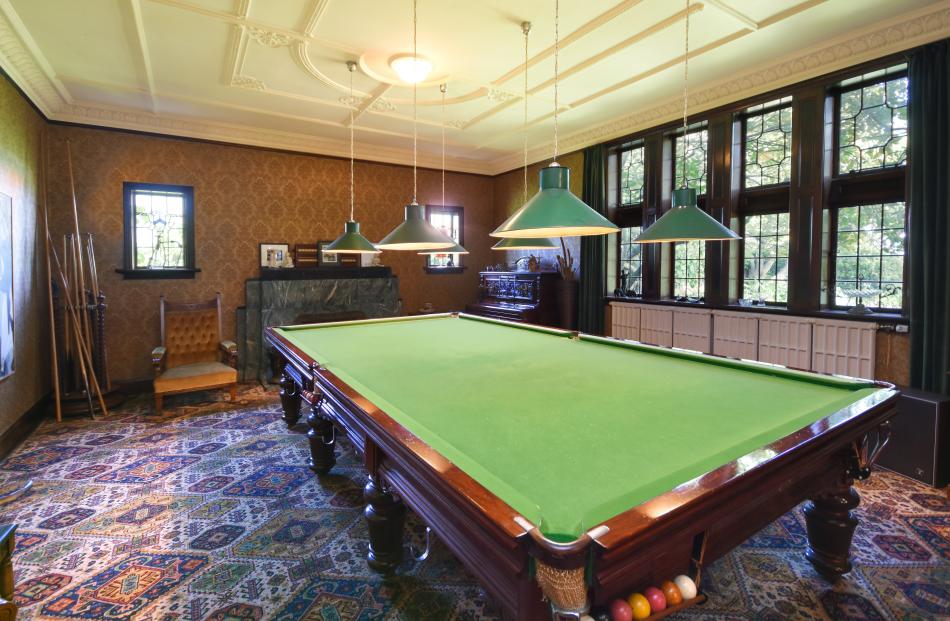 The full-size billiards table and carved cue stand were bought with the house.

One of Dunedin's most attractive stately homes has new owners. Kim Dungey reports. 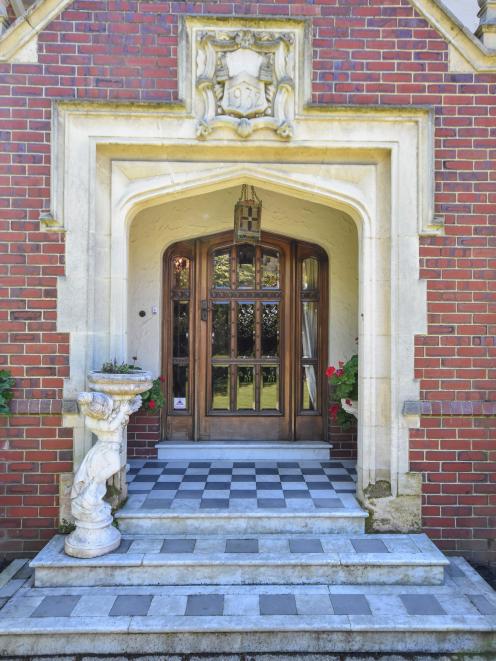 A hanging brass lantern in the porch has glass inset into perforated brass filigree sides. Photos: Wayne Magee/Virtual Homes
If Lyn and Malcolm Farry's grandchildren had their way, the well-known Dunedin couple wouldn't be leaving the St Clair home they have owned for the past 35 years.

"They call this the big house and have had lots of fun here," Mrs Farry explains. "They were planning how they could spoil the sale by having ghosts in the house and things like that."

Despite the grandchildrens' best efforts, the spirit-free home has been bought by new owners and the Farrys will move out in June.

The Tudor-style property that once boasted its own tennis court and that reportedly had the Melbourne Cup in its entrance hall has been the scene of numerous family gatherings: a menu headed "Big House dining" is a reminder of one occasion when their grandchildren, aged eight, nine and 10, served burgers in the lounge.

In 1983, when the Farrys and their eight children were starting to outgrow their Anderson's Bay home, a real estate agent told them the house at the corner of Forbury Rd and Ings Ave was for sale. 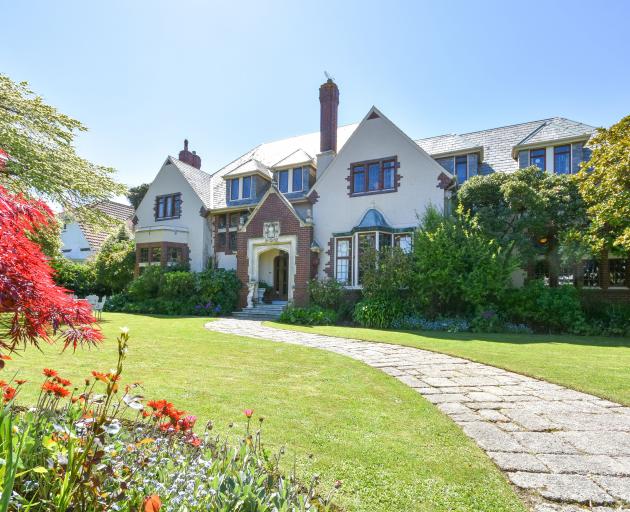 The picturesque Tudor-style mansion in the heart of St Clair would look right at home in the English countryside.
Mr Farry says the price was beyond a young family, then "just making their way in the world", but they instantly fell in love with the property and decided they would do what they could to buy it.

Their enthusiasm is understandable given the house was built for 5720 pounds, a fortune at the height of The Depression, and only the best materials and most skilled craftsmen were used in its construction. According to archivist David Murray, the cost of building an average home in the main centres at the time was about 925 pounds.

Set on 1939sq m of land, the scaled-down, 1930s version of a Tudor country house has a slate roof and stucco-covered double brick walls. Half-timbering and herringbone brickwork panels decorate the exterior.

The richly-panelled entrance hall has a wooden floor, massive fireplace and grand staircase. Lattice-work leadlight windows, ornate ceilings and stained glass feature throughout and there are Tudor rose embellishments in the ceilings and woodwork.

Mrs Farry says it is a "very usable" house that has never felt overwhelmingly large but she feels privileged to have lived in a property that was "so soundly and so beautifully built": "You don't get blase about it. You appreciate its beauty." 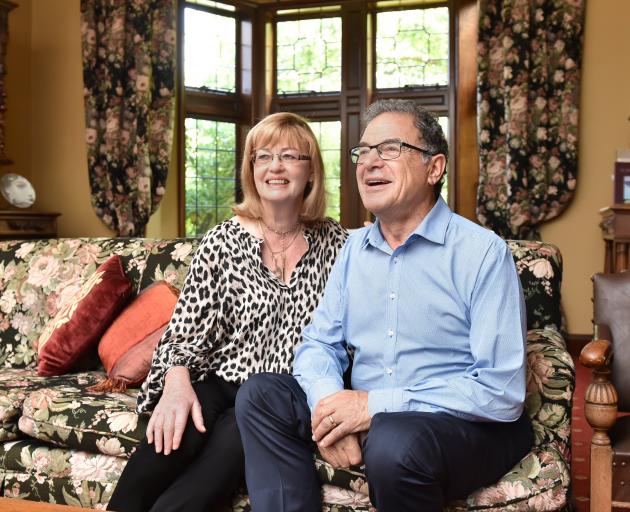 Lyn and Malcolm Farry are about to leave the Dunedin home they have lived in for the past 35 years. "Our eight children were brought up here so it's got a lot of very special memories," Mrs Farry says. Photo: Gregor Richardson
Designed by Miller and White, the 620sq m home was completed in 1932 for William Richard Brinsley and his wife, Vera.

Other owners included colourful, cigar-smoking businessman Stuart Falconer and his wife, Bertha Rawlinson. Ms Rawlinson was a well-known singer, composer and music teacher who conducted lessons at a piano in the lounge while Mr Falconer was the owner of Baghdad Note, the grey outsider that romped to victory in the 1970 Melbourne Cup. (The gold trophy was stolen from their Belmont Lane home in 1982 and never seen again).

The next owners were the Emslies, who disappointed neighbours by building a large garage over the tennis court to house their collection of vintage cars.

Although there have also been other changes, the layout remains largely original. The lounge at one end of the house and the billiards room at the other were both built at a slightly lower level to the rest of the ground floor. In between are the dining room and kitchen - separated by a servery - and a TV room that was reportedly created from a study and cloakroom. The six bedrooms and three bathrooms are all upstairs.

Call bells for the maids remain on the kitchen walls, although it is more than 70 years since there have been any staff to answer them. The bathrooms still have their original yellow tiles, terrazzo-lined shower and streamlined bath tub. A tall, carved chair in the entrance hall and a hefty billiards table were both bought from the home's previous owners. 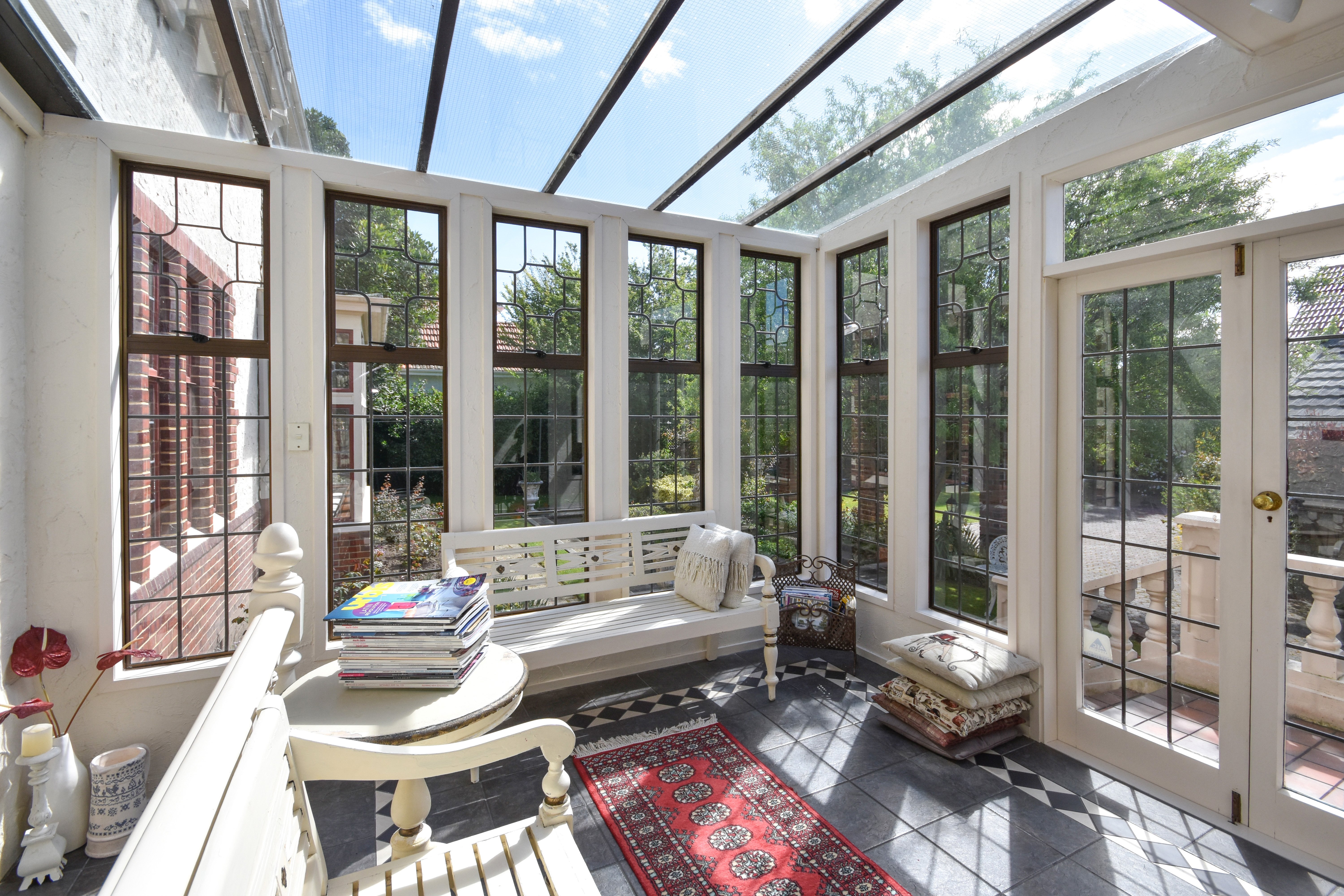 The Farrys completed the conservatory, adding windows and doors that were in keeping with the style of the house.
Two of the Farrys' first priorities after moving in were to tile an informal dining area that had already been added off the kitchen and to create a conservatory from a circulation space that led down stairs - the previous owners planned a wine cellar below but they made it into an office.

Outside, they added paving, pergolas and roses, and turned the garage, which had previously stored vintage cars, into a large games area for the children.

They reconfigured the kitchen, enlarged what were originally two small staff bedrooms, and converted another bedroom and adjoining sitting room into the master bedroom and ensuite. They also replaced the home's original silk carpet which after more than 50 years was finally showing signs of wear: "Like everything else in this house, it was amazing quality."

In the past, a gas-burning boiler circulated hot water to radiators throughout the house. Today, electricity heats the water and the radiators are supplemented by heat pumps.

Stained-glass windows above the stair landing depict a sailing ship, a stag and a figure who appears to be Sir Francis Drake. Mrs Farry was told these were possibly the work of Robert Fraser, the best of Dunedin's stained-glass window makers at the beginning of last century, but cannot be sure: "There's no-one around, still alive, to tell us much about this house and I think I was just too busy when we moved in to try to find out."

For years, the couple have juggled family commitments with their many business interests and their community work. At one stage they had five children under five.

Now a business consultant, Mr Farry is a retired dentist and former Dunedin city councillor who has chaired the Otago Youth Wellness Trust, the Kavanagh College board of trustees and the fundraising committee for Orokonui Ecosanctuary. He was also a director of Mercy Hospital and the driving force behind Forsyth Barr Stadium. 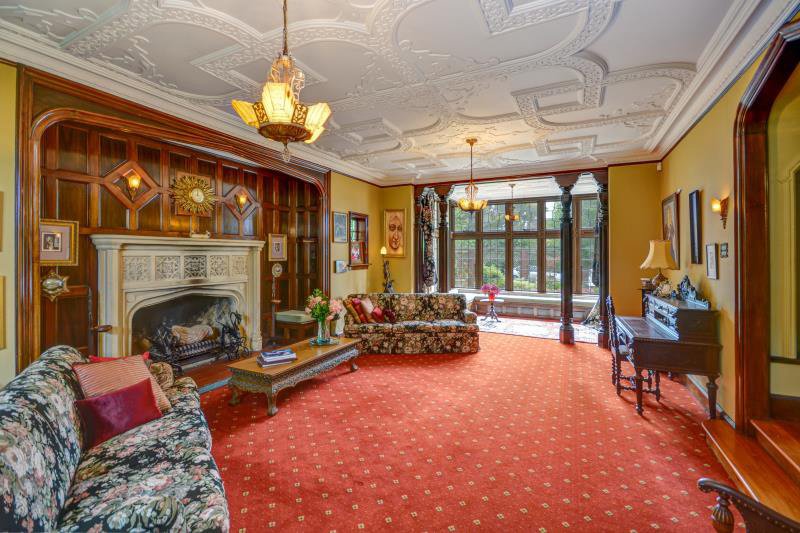 The formal lounge has a large fireplace in a panelled recess. "It throws out an amazing heat, but you just about need a tree to keep it going," owner Lyn Farry jokes.
Mrs Farry is a trained primary school teacher who chaired the St Bernadette's School board of trustees and coached Otago age-group netball. She has also been involved with the Sophie Elliott Foundation and ran the Zonta Club of Metropolitan Dunedin's charity fashion show for its first nine years, raising significant funds for local causes.

Despite full schedules, the entire family always gathered for dinner and conversation at the long dining table that previously did duty in a board room in Oamaru, she says.

"We had it set for 10 every night when the kids were here because we felt it was important that everyone should eat together."

Twenty-first birthday celebrations have also been held in the house and when their parents were away on holiday, the older Farry children were known to hold the odd party.

"We didn't hear about them until we came home and found one or two things were maybe broken," she says, laughing. "But they weren't unruly. They were just like any other university students. They used the house, as we suggested they do, brought lots of friends and enjoyed living here."

Each occasion has contributed to the home's rich history so when the sale was finalised, it wasn't only the grandchildren who were a little sad.

"Our five daughters were here with their children. The call came through about 6pm and everybody cried, thinking of the people who'd come through our doors over the years."

Having two people living in a large house seems "silly" though so they are planning to build a three-bedroom home further along Forbury Rd and spend more time with their nine grandchildren, some of whom live in Australia and Japan.

"We've absolutely loved every minute of it and we'll be sad to leave. But it's nice that local people have bought it and we're really pleased that it's another family."