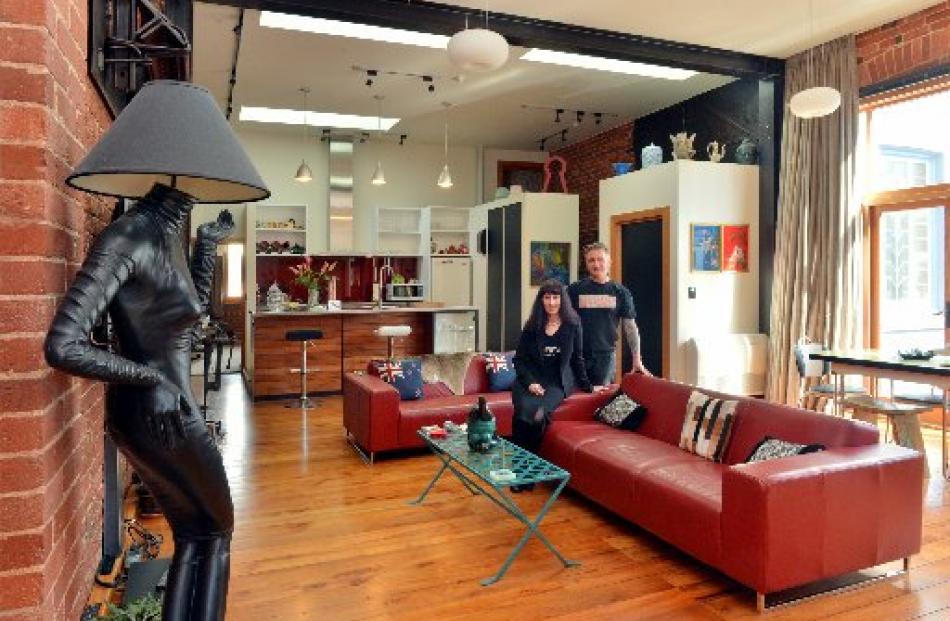 Lawrie and Sarndra Forbes in their warehouse apartment. ''Lucy the lamp'' (at left), was bought while on holiday in Nelson and laid down between the beds in their pop-top caravan for the journey home. Photos by Gerard O'Brien. 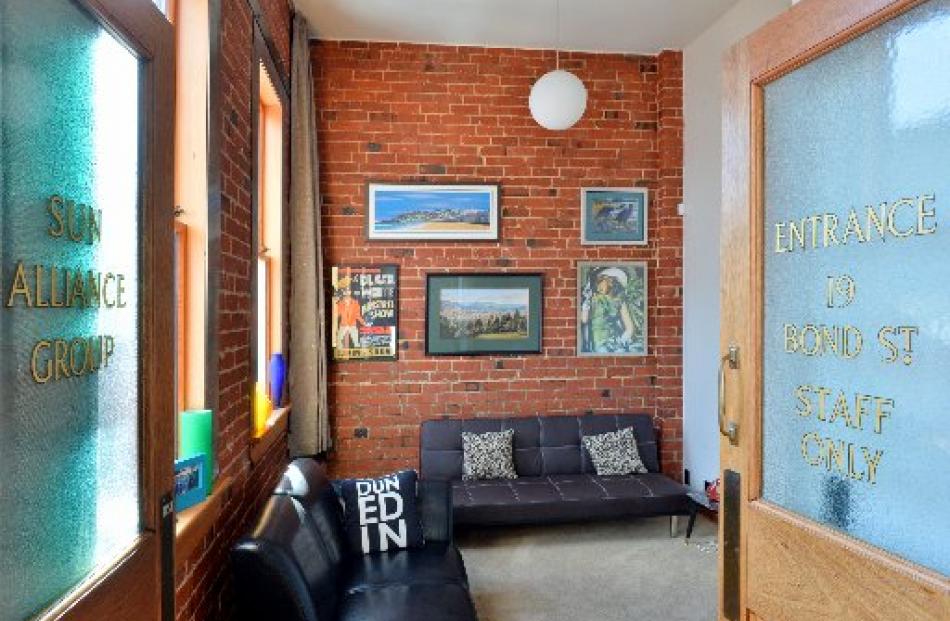 Doors from the former Alliance insurance premises open into a cosy lounge. 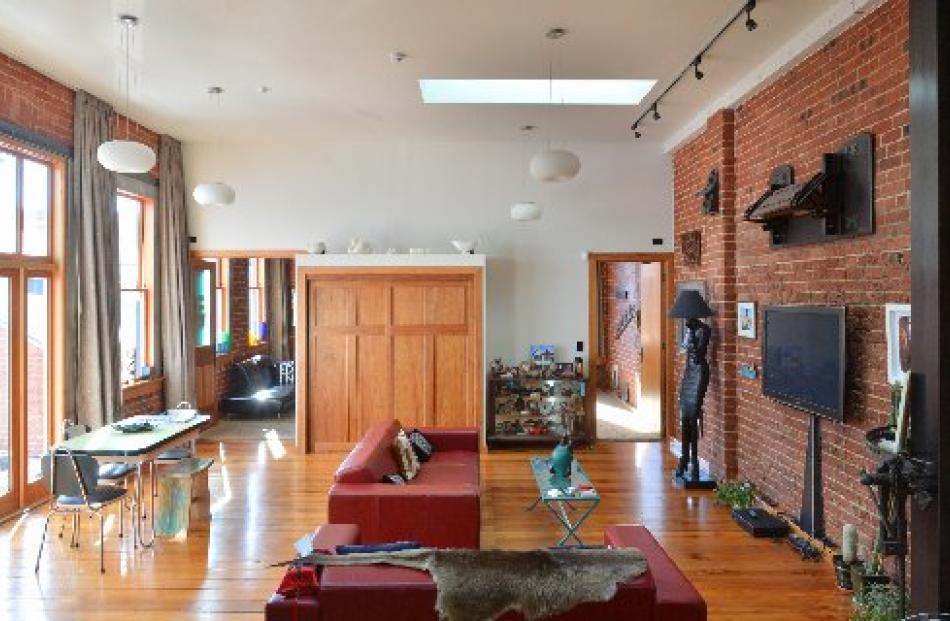 The open-plan living area, with doors at the end leading to a small lounge and a second bedroom. 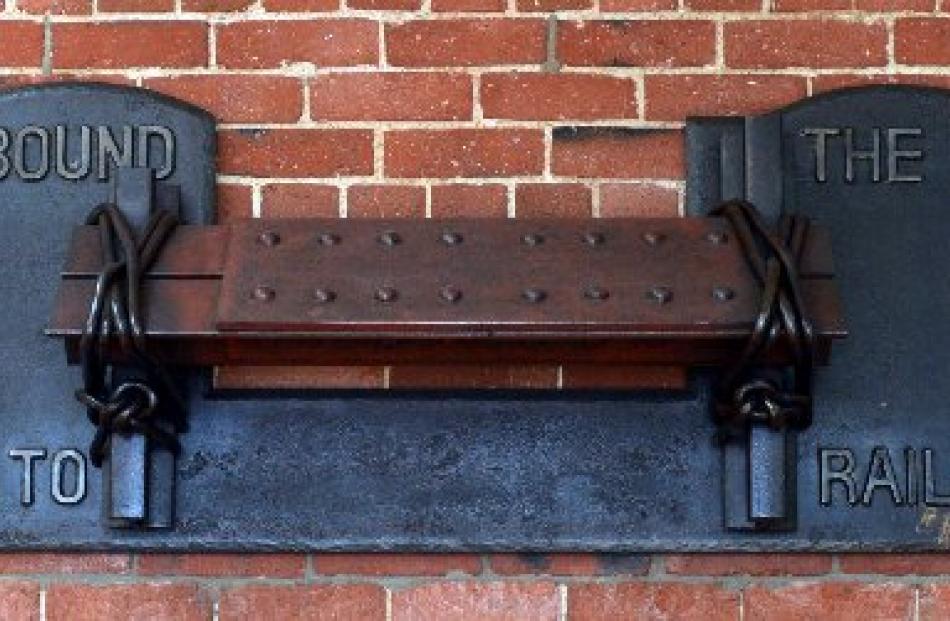 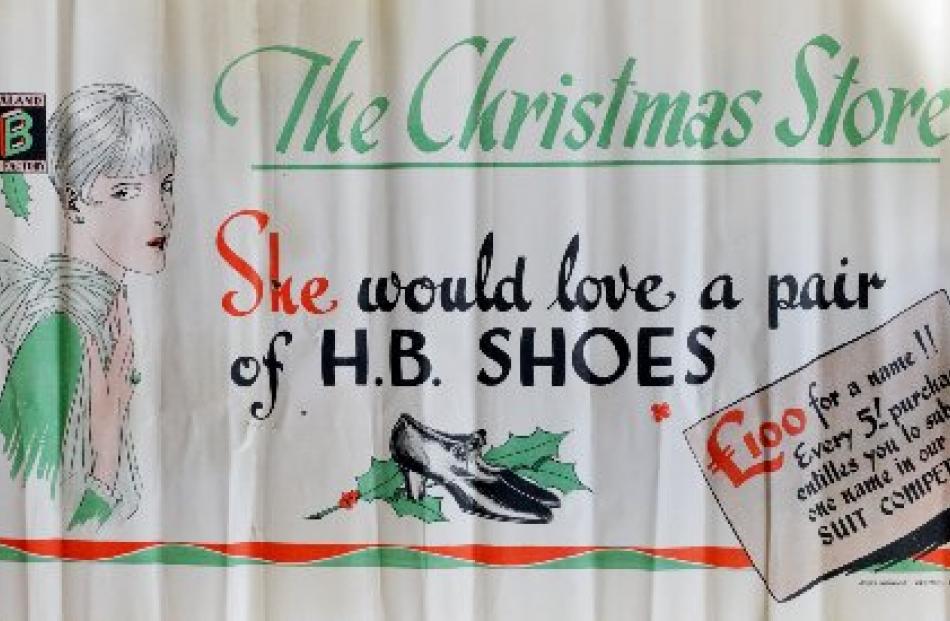 Cleaning out the former Rogan McIndoe site, the owners found all manner of material that had been printed there, including this advertisement for the HB clothing factory. 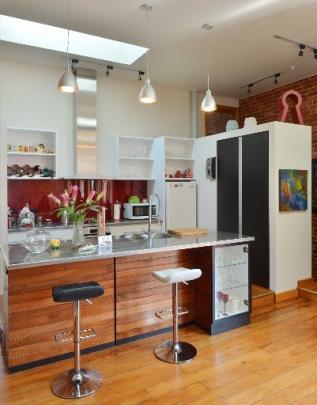 The kitchen island is faced with wall panelling from an office fit-out in the 1960s.

This apartment in Dunedin's warehouse precinct honours the past while using the latest in earthquake strengthening. Kim Dungey reports.

Desperate men do desperate things, says Lawrie Forbes, explaining how he came to own the beautiful doors gracing the apartment he shares with wife Sarndra in Dunedin's warehouse precinct.

Forbes was trying to complete the ground floor of the former Rogan McIndoe building in Crawford St so tenants could move in when the owner of another historic building told him it was being renovated and he might want to buy some of the original fittings.

The Dunedin man had no time and no money.

''It was the last thing I needed,'' he recalls. 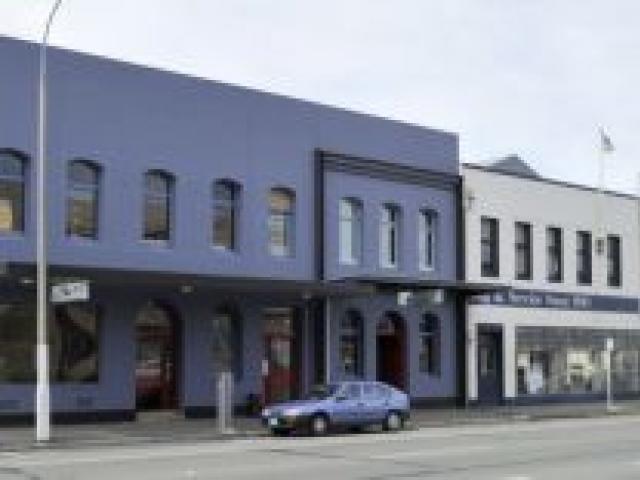 The former Rogan McIndoe building in Crawford St
But he also knew that when opportunity knocked, it paid to answer and soon after stepping inside the former Alliance Insurance building, he had struck a deal with the owner.

He would pull his men off his own job for three days so they could transform the rabbit warren of small offices into a usable space and would keep the discarded materials in lieu of payment.

It was this arrangement that provided the apartment's solid mahogany and rimu doors, the frosted glass doors bearing the Sun Alliance Group name, and the 1960s wall panelling used as facing on the kitchen island.

The Forbes, together with business partner Craig McNaughton, bought the Rogan McIndoe site in 2008 as an investment, never planning to live there, he says.

But less than three weeks later, the printing firm was liquidated, leaving them with no income from the three buildings nestled between Crawford, Jetty and Vogel streets.

In difficult financial times, finding a single tenant to take on the entire site proved impossible.

So the trio battled the city council to change the large-scale retail zoning and split the premises into separate tenancies, starting with Agility Logistics.

Then Sarndra suggested that she, Lawrie and their 12-year-old Jack Russell move in, too.

''It was all in offices and quite untidy,'' she recalls of the building facing Crawford St, ''but when we removed everything out of here, I could clearly see that this would make a fantastic apartment.

''I didn't have a clear picture in mind, but I loved what I saw in its pure state: the rimu floors and the brick walls and I knew [because Lawrie is a boilerman] that there would be quite a bit of steel in [the finished apartment].''

Like the Alliance Insurance premises, the Rogan McIndoe site was steeped in history. As buildings were cleared out and lean-to structures demolished for parking, workers discovered a wealth of material associated with the printers and publishers who had worked there.

Seven tonnes of paper was sent to recyclers but papers related to literary projects were donated to the Hocken Library and printing plates given to the Dunedin City Council archives.

Forbes found job sheets for the Union Steamship Company in a floor cavity and old advertising posters for Hallenstein Bros. A leadlight window with chevron motifs had also survived.

Today the building's first floor is a two-bedroom, two-bathroom apartment that, in spite of the busy one-way street below, is surprisingly tranquil.

The 120sq m space comprises a large living area with the master bedroom off one end and the second bedroom and a small lounge off the other. A deck cantilevered off the back of the building is in the planning.

New skylights ensure that the 3.8m-high space is light and airy while the long brick walls are an ideal backdrop for artwork.

Sarndra, a self-confessed ''sentimentalist'', has a collection of 1950s dresses which are displayed, in turn, on a child mannequin from the former DIC store.

There's crystal passed down by her mother and grandmother and an assortment of white Crown Lynn vases.

As she predicted, there is also plenty of steel to complement the building's industrial feel: printers' forms stamped Melbourne and Sydney, sculptures made by Lawrie, offcuts from railway wagons that he made into architraves and steel from the old Kensington gas accumulator covering what was an ugly join in the brickwork.

Structurally, the building was not as sound as first thought. Water had been running down the inside of the walls and rotten trusses made a new roof a priority.

A 13-tonne concrete strongroom, built during World War 2 when the building was occupied by the Marine Department, also had to be broken up and removed.

But perhaps the most crucial decision was the one made even before the February 2011 Canterbury earthquake to strengthen the property and take it to 100% of new building standards.

This involved tying the roof and floor into the walls by chemically injecting threaded rods from the timbers into the brickwork, using diaphragm ceilings, and adding steel frames on each of the column lines to limit deflection.

As expected, the building rolled about but did not shake violently in the 2011 quake; the aim was to hold the whole thing together but not too rigidly.

The couple say the apartment is testament to a ''brilliant'' team of people including architectural draughtsman Geoff Terpstra, project manager David Booth and engineer Peter Stevenson, whose work on site earned him the earthquake strengthening award in the city's 2011-12 heritage reuse awards.

The project was also the overall winner that year, the judges saying it showed what could be achieved in heritage buildings with vision, innovation and hard work, and played a central role in sparking regeneration in the warehouse precinct.

For Sarndra, moving from a 1950s home with a large terraced garden was a huge, but welcome, change.

Recently, the open-plan apartment was the scene of a pot-luck dinner, she adds.

Some of their friends were gathered around the kitchen island preparing food; others were at the Formica table, chatting. The place was filled with laughter.

''I remember looking up at one point and smiling to myself because I love that.''

''A home is not just for yourself. I've always felt that other people should share in it as well and this place lends itself to that.''

A brief history
Built in 1899 on land that had been reclaimed from the harbour, 53 Crawford St was originally a store for merchant David Baxter.

The two-storeyed brick building, designed by Mason and Wales in revived Italian renaissance style, was later home to a variety of tenants, including grain merchants, solicitors and a sugar specialist.

In 1940, the Iron and Steel Company of New Zealand had the building's plasterwork changed and it was probably then that the Victorian embellishments were removed.

The building and its neighbours also had a substantial connection with printing. John McIndoe Ltd, established in 1893, had long been in the immediate vicinity and eventually expanded on to the site. In 2002, the company merged with Rogan Print to become Rogan McIndoe Ltd.

In 2008, the site was bought by One Zeal Ltd, which is owned by the Forbes and Craig McNaughton.