Dunedin’s Catholic diocese wants to find new uses for the former St Dominic’s Priory, which included a convent built in 1877 and an 1890 girls’ school, partly clad in bluestone. With its poured concrete construction, double-glazed music rooms and... 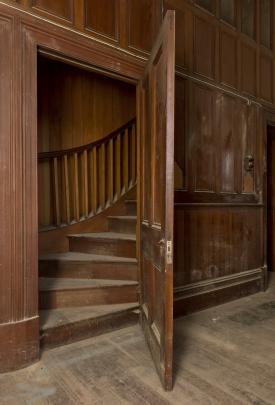 Narrow stairs led from the entrance lobby to the infirmary, allowing doctors to visit patients without passing through the rest of the convent. 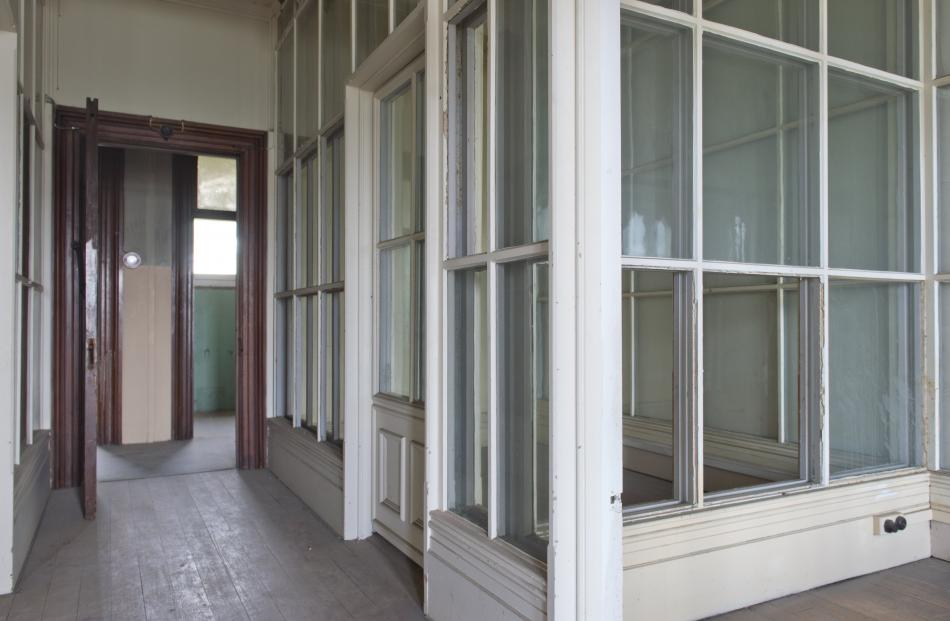 Music rooms were double-glazed so pupils could practice without disturbing each other but still be seen by teachers in the adjoining classroom. 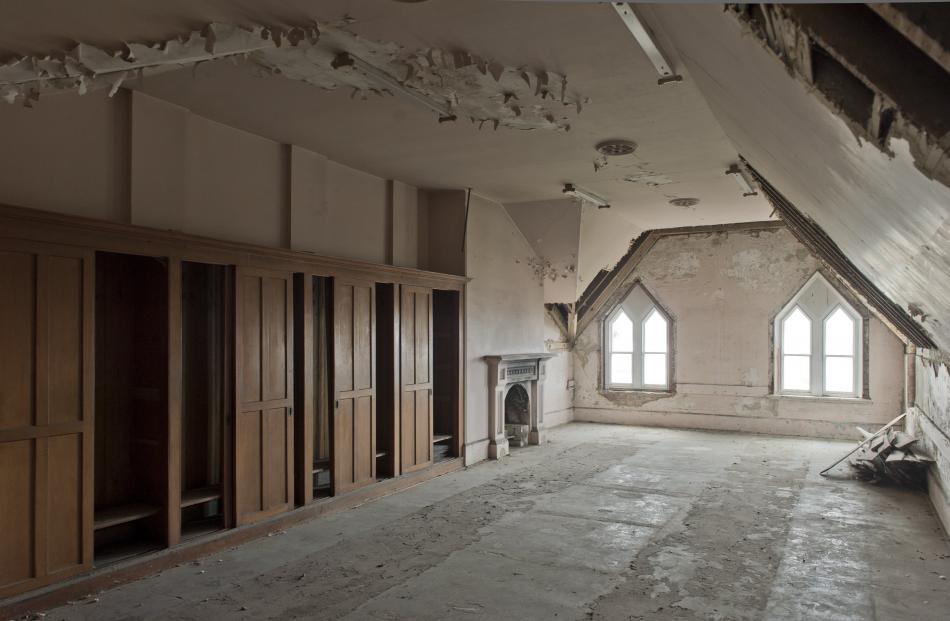 The boarders’ dressing room, with wardrobes along one side. 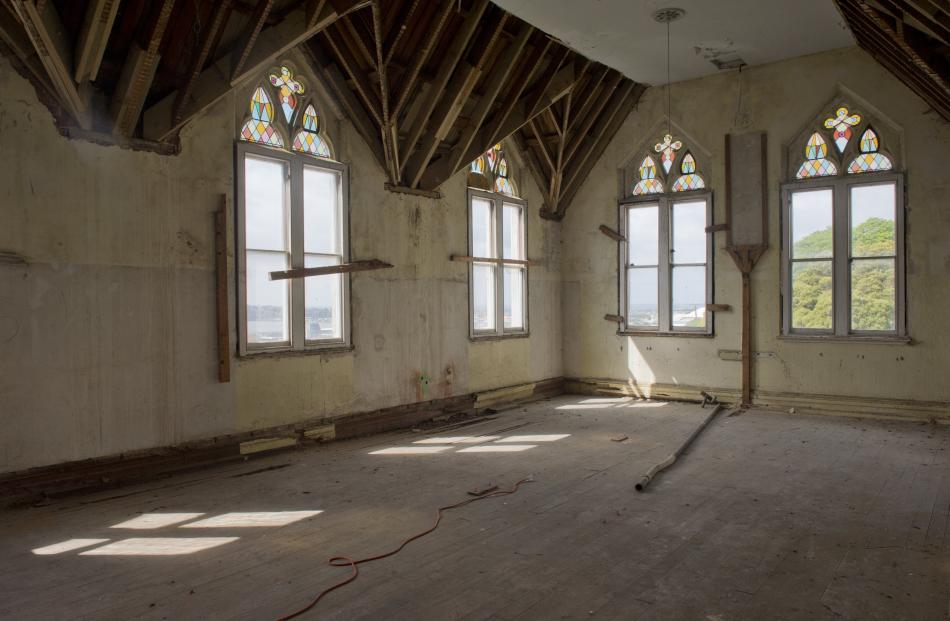 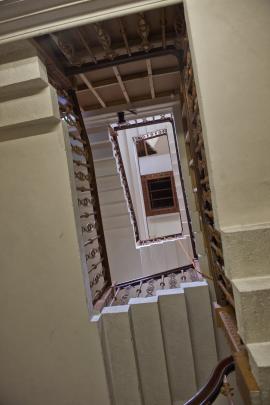 The hanging staircase in the college was a considerable technical feat for the time. 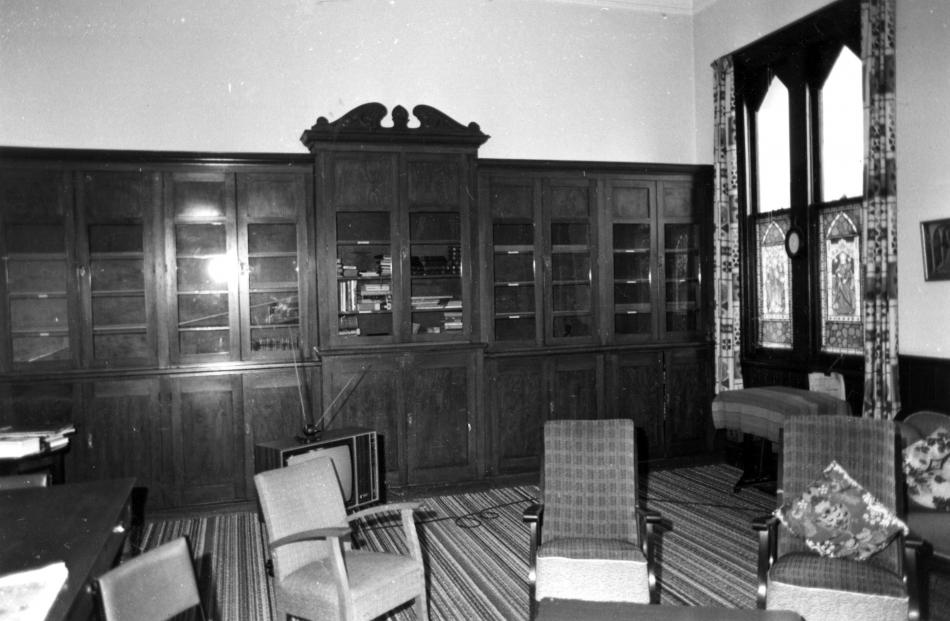 These next four photos, taken about the early 1980s, show (above) the nuns’ community room 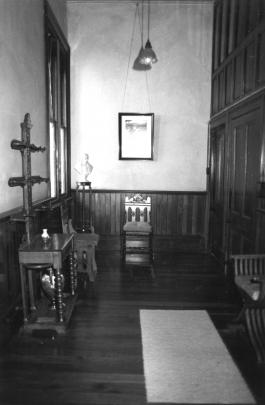 the entrance lobby in the priory, 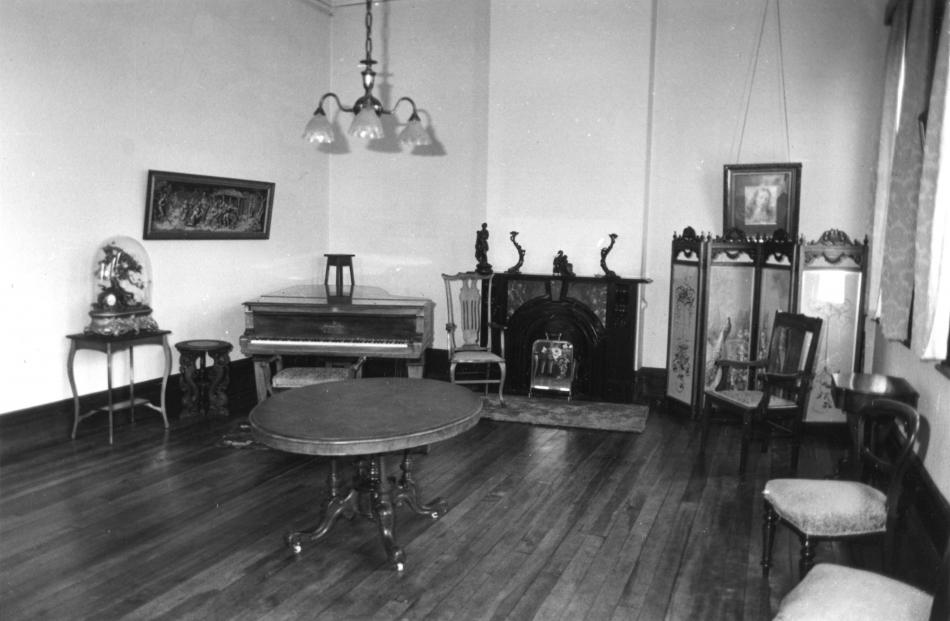 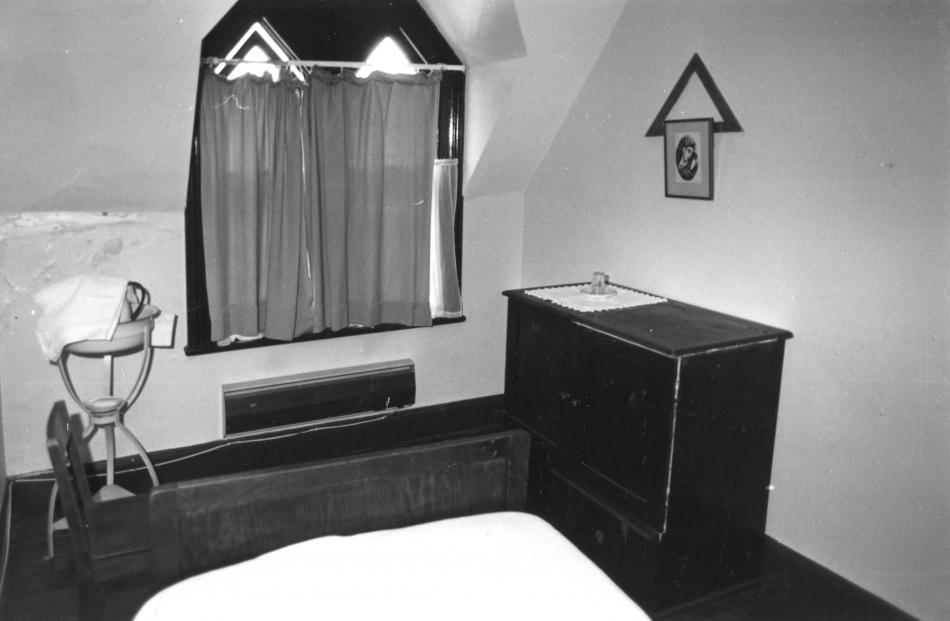 To future generations, St Dominic’s Priory will represent a way of life as remote to us as medieval castles, those on a recent tour of the building were told. Kim Dungey reports.

Peeling plaster and pigeon droppings dot the interior of the former St Dominic’s Priory but its owners hope the Dunedin building will be brought back to life.

Once the largest unreinforced poured concrete building in the southern hemisphere, it’s also described by Heritage New Zealand as one of the country’s most important Victorian properties.

Recently, during the Otago Heritage Festival, members of the public were given a rare glimpse inside and an indication of what the Catholic Diocese of Dunedin might do with it.

Priory project co-ordinator Sean Toomey says the diocese no longer uses the 144-year-old building and doesn’t have the resources to upgrade it. However, it hopes to retain ownership of at least part of the building and to partner with organisations that can provide both funding and new uses.

Activities that benefit the wider community, such as health or education services, are envisaged but to provide income, commercial space will also be needed.

In the past, a boutique hotel and apartments have been proposed. Upgrading the property is expected to cost $12 million to $18 million; providing accommodation would cost more than developing office space.

One idea is to move the main entrance from Smith St to Tennyson St, with a new building containing a lift and stairs linked to the rear of the property, Mr Toomey says.

The exterior and two internal staircases are protected by a heritage covenant but the back wall could be altered to allow for light, access and services.

The priory’s story begins in the 1860s when gold lured many Irish Catholics to New Zealand. In 1871, 10 Dominican nuns from Dublin arrived with the first Catholic Bishop of Dunedin to begin teaching local children.

The original plan was to build a church flanked by two identical wings but this never eventuated. Instead, a convent and classrooms were opened in 1877, with an 1890 extension known as St Dominic’s Ladies’ College accommodating older day pupils and boarders.

St Joseph’s Cathedral, further to the south, was completed in 1886. 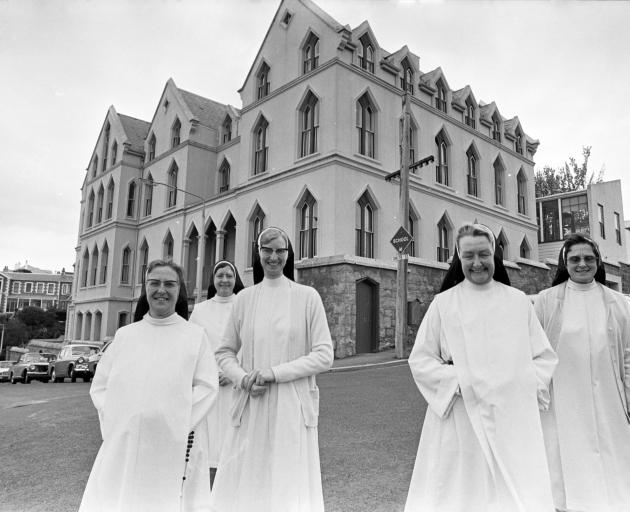 Five of the nuns who were living in St Dominic’s Priory in 1977, a century after the building opened. They were (from left) the mother prioress general Sister Constance, and Sisters Roberta, Margariti, Gertrude and Albert. PHOTOS: ODT ARCHIVE
A century after the nuns’ arrival, the college had a roll of 200 girls but a few years later, St Dominic’s amalgamated with St Philomena’s College in South Dunedin and for the past 40 years, the building has been largely unused.

The priory, which has a Heritage New Zealand category 1 listing, was part of a cluster of Catholic buildings in Smith, Tennyson and Rattray Sts dubbed Dunedin’s "Vatican". The story goes that the city’s staunch Presbyterians objected to Catholics setting up shop in the heart of the city, and that is why they were located above the Octagon. However, they may have had the last laugh as most rooms enjoy sweeping views over Dunedin.

With its large number of windows, the bright, airy building bucked the stereotype of the gloomy convent. Roof lights, glazed partitions, and glass panels set into the floor ensured that natural light reached almost every part of the interior.

Another innovation by architect Francis Petre was the use of poured concrete, then an experimental building material. Iron plates, held in place by a scaffolding system, provided the formwork for the concrete walls. Kauri moulds set into the walls prior to the concrete pour were used to form window and door openings. 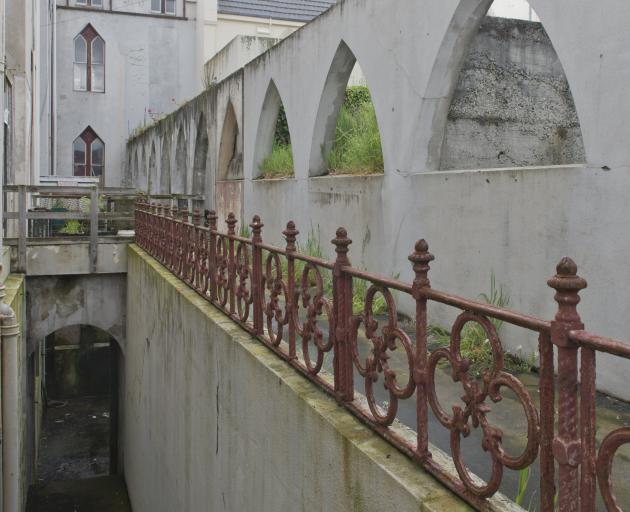 The remains of what was a two-storeyed, 30m-long covered walkway leading to the nun’s chapel and garden. PHOTO: GERARD O’BRIEN
The style of the priory is referred to as "stripped Gothic Revival" — Gothic architecture without the usual ornamentation. However, this was considered too plain to sit next to St Joseph’s so the part of the college nearest to the cathedral was made more decorative and faced with bluestone.

An 1877 article in the Catholic newspaper, the New Zealand Tablet, reported that a narrow staircase led from the front door up to the infirmary, allowing the doctor to visit patients without "trespassing on the strict inclosure (sic)" of the Order.

High stone walls surrounded the property and a rear cloister gave the nuns access to their garden, chapel and novitiate (a house where novices were trained).

While some of those have disappeared, signs of school life remain — the gymnasium still has hooks in the ceiling for climbing ropes, marks on the dormitory floors show where partitions stood and an honours board listing duxes still hangs in the study hall.

Life for the nuns and pupils in the early years was regimented, Mr Toomey says. Boarders reportedly had a certain number of minutes each morning to wash their faces, chores to do on Saturday mornings and permission to visit relatives in the community only once a month. 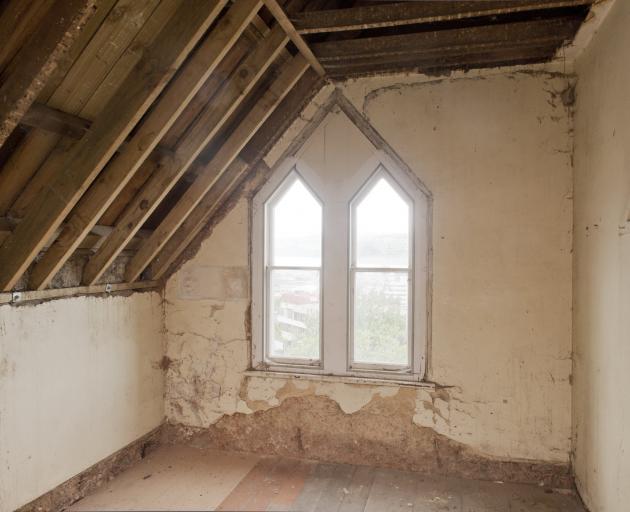 The nuns’ bedrooms were small but had windows overlooking the city. Originally they were to be heated by steam pipe but it is not clear if the central heating system was ever used. PHOTO: GERARD O’ BRIEN
Nuns rose at 5.30am, and attended prayers and Mass before beginning their teaching duties. Meals were eaten in silence; lights were out at 10pm.

However, practices changed after the Second Vatican Council in the 1960s.

While the priory’s peeling paint and plaster look "rough", Mr Toomey says it’s actually a healthy sign as it shows the building is drying out.

Before the leaking roof was replaced with new Welsh slate, at a cost of $850,000, the property was cold, damp and slowly deteriorating.

With the roof removed, rotten timber could be replaced, the upper floors strengthened and the rafters tied to the exterior walls. That, together with the sheer amount of concrete in the building and the large number of small rooms providing natural cross-bracing, mean the seismic strength is 100% of new building code.

Funds for the repairs so far have come from the diocese, Dunedin City Council Heritage Fund, Otago Community Trust, Lottery Grants Board and Southern Trust.

Further work will have to be done in stages but once complete, the building should be "pretty spectacular", he says.

"We’ve still got a long way to go but there’s plenty of hope for its future."

And yet nothing spoken of Cargill's Castle which is fast becoming demolition by neglect.