A little bit of China in Sydney 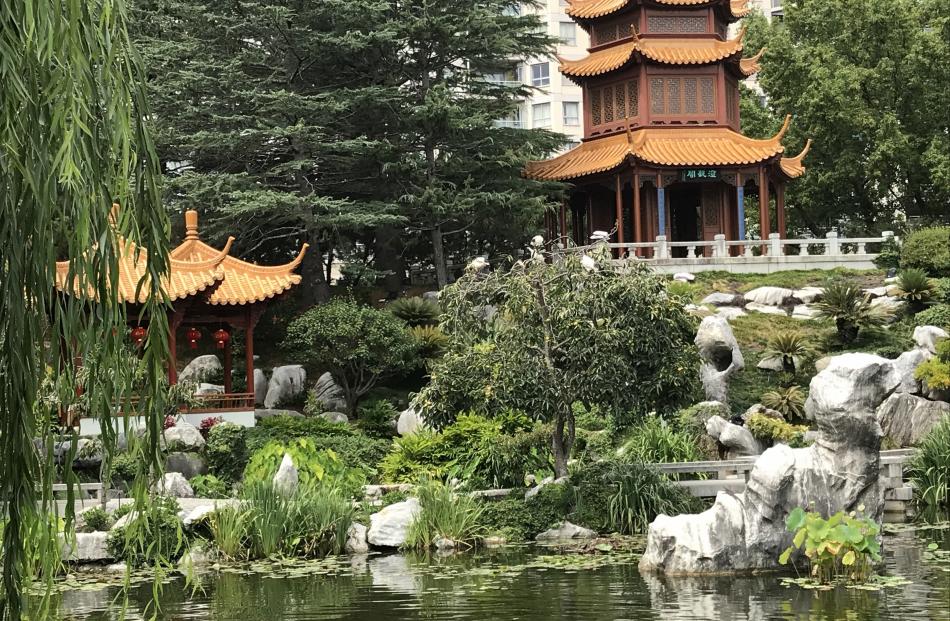 The Gurr (Clear View Pavilion) at the top of Sydney's Chinese Garden of Friednshiop and the Twin Pavilion (left). Photos: Gillian Vine 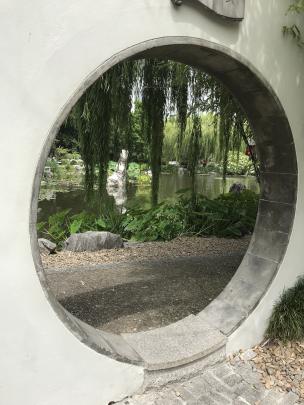 A moon gate forms a circular frame for a garden view. 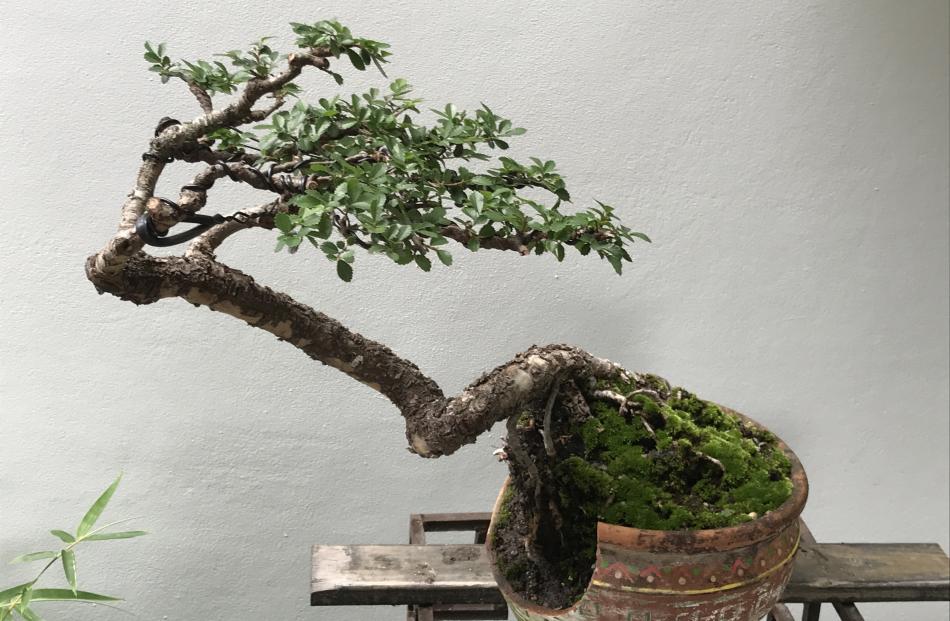 A miniature tree in the penjing (bonsai) display. Unlabelled, it is possibly Wrightia religiosa. 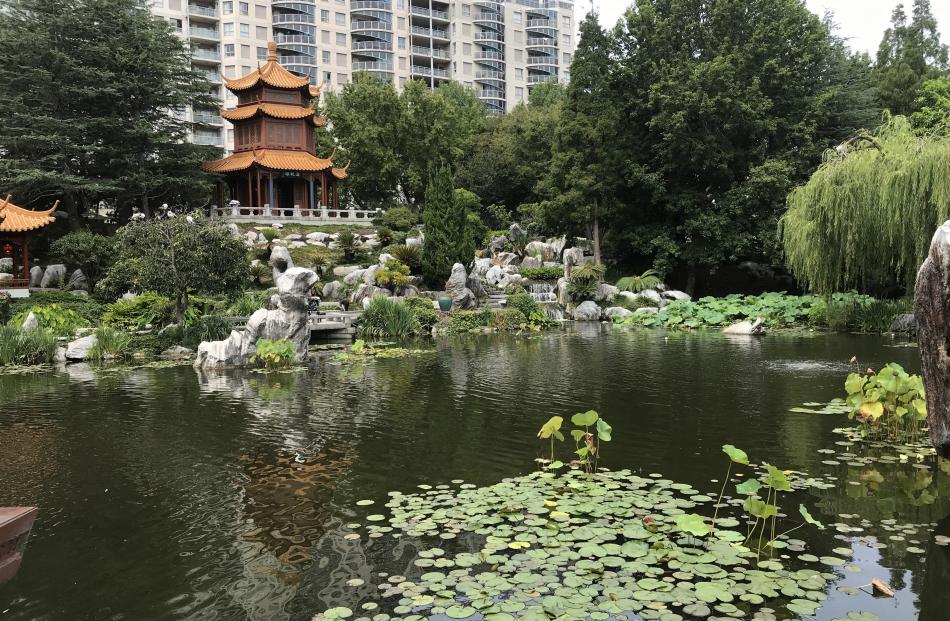 The lotus lake has a good display of the scented subtropical plant. 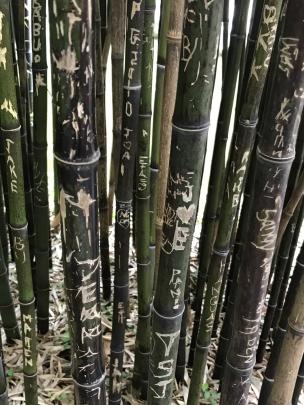 Graffiti on stems in the bamboo forest. 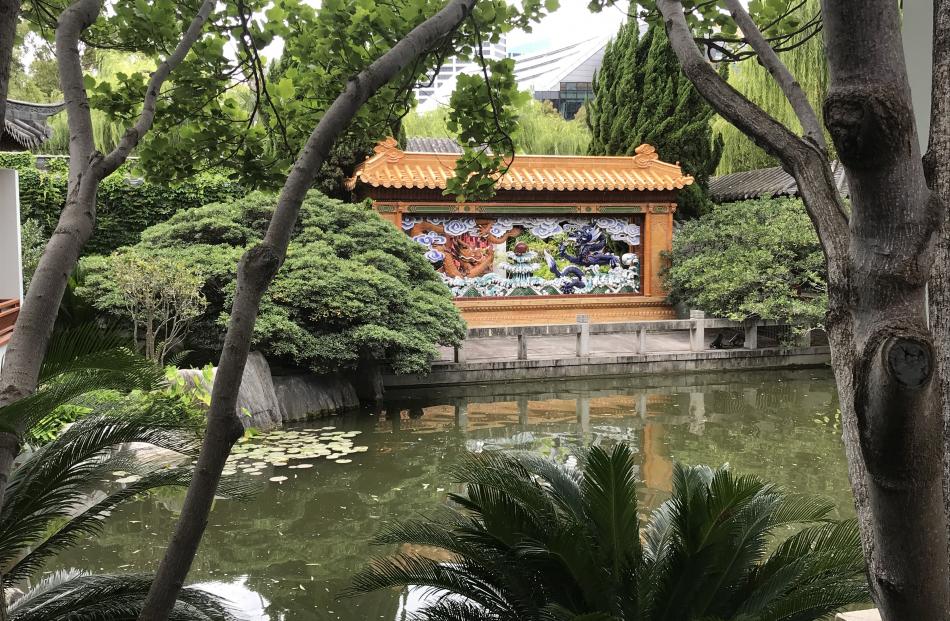 The Gragon Wall symbolises the links between New South Wales and Guangdong.

In some ways, Sydney's Chinese Garden of Friendship is like Dunedin's.

The first similarity is that it symbolises the links between two cities, in this case Sydney and Guangdong. Secondly, like the Dunedin version, it recreates the harmonious structure of a classical Chinese garden, where plants, pavilions and pathways are positioned in harmony and give the illusion of a greater area than the garden actually encompasses.

Opened in 1988 to mark the Australian Bicentennial, it was - like the Dunedin garden and Bendigo's Yi Yuan Gardens - built by Chinese artisans and follows the Taoist principles of Yin-Yang to achieve balance, while emphasising Qi, the central force of life and energy.

Although some gardens in China now have floral displays, often using potted plants buried in the ground, traditionally flower beds were not included, although ponds were bright with lotus flowers, while plum blossom, tree paeonies and other flowering shrubs were highly prized.

From the first gardens of 3000 years ago, though, the emphasis has been on recreating the natural world in miniature. Rocks and water are important elements in creating landscapes of mountains, rivers, lakes and forests, while pavilions are sited to allow peaceful contemplation of each aspect of the garden.

A row of eight life-sized mechanical cats produces music as visitors enter the garden. Leaving them untouched brings luck for the coming year, while patting the tiny cat on the end is believed to bring fortune. (I did but the promised riches are yet to come.)

In the Courtyard of Welcoming Fragrance, I can't smell anything, but anyway am more interested in the display which demonstrates the difference between the Chinese penjing and bonsai, the latter the less complex version the Japanese developed later.

Although they look ancient, none of the specimens on show is particularly old, dating only from 1932. However, it is frustrating that few species are named: one of the few was tagged Chinese pine, which could have been Pinus massoniana or P. armandii, as both are commonly known by that name and widely used in penjing.

Another looked like Wrightia religiosa, also a popular penjing subject, and again, a label would have helped. By that's a minor quibble, as elsewhere in the garden, signboards give useful information.

The central feature is a lake, full of water lilies and lotuses, and fringed with shrubs and trees, including weeping willows.

A path meanders around the garden, following the contours of a brook and past the Water Pavilion of Lotus Fragrance, apparently the best place to pause and smell the lotuses when they bloom in summer.

Nearby is a round pavilion and a moon gate, designed to draw the eye to the view across the lake, although younger visitors prefer using the gate as a frame for their selfies.

In a grove of black bamboo (Phyllostachys nigra) are seven large limestone boulders, each representing one of the seven sages who laid down the Taoist philosophy. The bamboo has proved irresistible to graffiti artists, whose names - in English and Chinese - are carved into the thick, dark stems.

The path heads uphill to the garden's highest point, the Gurr or Clear View Pavilion. Looking over the garden from the Gurr's viewing platform, the buildings of Darling Harbour a short distance away are a reminder that the garden - like Dunedin's - is a quiet retreat in a busy cityscape.

Carved panels in the pavilion show the Three Friends of Winter (plum, black pine and bamboo), so named because they remain attractive year-round, as well as other traditional Chinese garden flowers.

Behind the Gurr is a small stand of black pine (Pinus thunbergii), which not only links the pavilion to the garden but also blots the city as the visitor moves downhill to the rock forest. Here, large boulders recreate a centuries-old fable, Ashima and the Landlord, but I admit that even when I'm told the story, I can't quite make the connection.

Almost back at the entrance, I pause to admire the Dragon Wall. A gift from Guangdong, it features two imperial flying dragons, a blue one (New South Wales) and brown (Guangdong).

Like many other gardens worldwide, Sydney's Chinese Garden of Friendship has developed a number of activities to bring in non-gardeners. Adults and children can dress up as emperors, warriors or princesses; enjoy a traditional Chinese tea ceremony on Saturday mornings; feed the koi daily; and children aged five to 12 can hunt around the garden for the 12 symbols of the Chinese zodiac. Except for costume hire, all these extras are included in the ticket price.

Visiting the garden is a pleasant way to spend an hour or two and escape central Sydney's bustle, while comparing its Cantonese style to the Dunedin Chinese Garden's Suzhou-inspired design.

The Chinese Garden of Friendship, Pier St, Darling Harbour, is near the city's Chinatown and Paddy's Market. It is open every day except Good Firday and Christmas Day, from 9.30am until 5.30pm. Tickets cost $A6 (NZ$6.40) for an adult, $A3 for a child and $A15 for a family of two adults and two children.