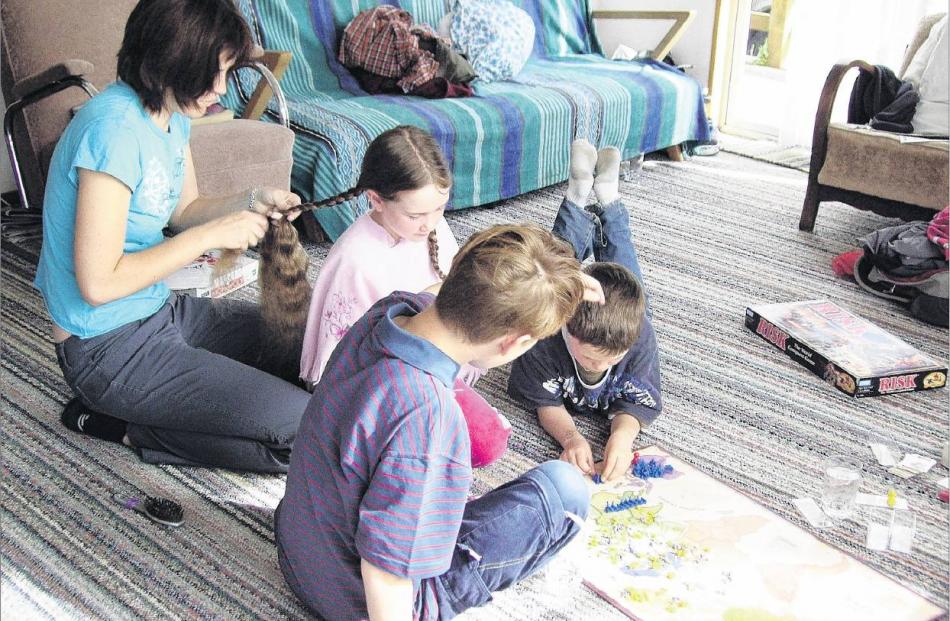 From the 1970s wallpaper to the children's scribbles on the walls, a Nugget Point crib has a special place in the heart of Kate Botting. Hamish MacLean discovers the reason for having a crib only 15km from home.

Sometimes the value of a crib is measured in memories.

"It was just a great big family thing. We used to go down to have Christmases and New Year at the beach," she says.

"We would have a tent out the back, the kids in the tent. We'd just bunk up."

There were two sets of bunks, five beds in one room, a double bed in another and the lounge would take double beds and single beds. She laughs about it now.

The family grew up going to her grandmother's crib on the foreshore, but when families expanded, Ms Botting's mother Carol left her sister Hilda with the crib at the beach and she (Carol) bought a crib on Marine Tce in 1975.

Ms Botting owns it now. She took the Otago Daily Times on a tour of her crib to see children's scrawling on the walls and an overstuffed shelf of ageing hardcover books with inscriptions to family members dating back to the 1950s inside.

She laughs at the 1970s wallpaper.

"It was very easy to get bucket-loads of people in here - and that was the point."

The crib is unpretentious and has heart. It stands out on Marine Tce, surrounded by tidy bed and breakfasts; modern homes and cribs have sprung up around it.

It has not seen as much use as it once did when it was her mother's crib.

She loved taking her grandchildren out to stay with her, two at a time to avoid fights, she says.

"My mum had fond memories of coming down here with her dad. They'd always been down here in the Catlins. They'd be fishing."

In the backyard, her mother's favourite tree, a totara, stands over a nursery, seedlings of native species to be replanted in the area by South Otago Forest and Bird.

Her family did not have a place at Kaka Point until World War 2, when the fear of a Japanese invasion drove down prices at beachfront properties, she says.

Her grandmother, Granny Benson, bought a crib on the foreshore.

"She bought a wee bach because the Japanese were coming," Ms Botting says. "Everyone thought they were going to be invaded . . . people were selling . . . and so, she bought."

The family's first crib on the beach "got demolished and changed", Ms Botting says.

But the crib at Marine Tce is still home to many memories, spending time there when she was young with her two sisters and her brother.

Some memories are bittersweet. Ms Botting's sister Marion Young was diagnosed with cancer in 1991. She died in 1996. She had four children, her oldest was 11 and her youngest was 2 years old at the time.

She was told she had a benign tumour in her head, but doctors soon realised they had made a mistake, Ms Botting says.

Her sister suffered from terrible headaches and lost her vision.

"It was pretty traumatic for five years, and then she died," she says. "I think that made a big difference with the family, with the crib too."

Near the time she died, her sister went to hospital. She could not eat, she could not drink, she says.

"On the weekend, they said, ‘we'll put you into a coma, because we can't really do any more for you'," she says.

"We got in the ambulance with her. We had the IV feed and everything.

"Some of the kids got in the ambulance with her, some drove down. One of the cousins had bagpipes, so he had the bagpipes down at the beach. The ambulance backed up so she could just smell the beach.

"It was really quite nice.

"She loved coming down for a break when she wasn't well."

Her sister's ashes were spread nearby at Nugget Point.

"I just can't think of ever not coming to Kaka Point," Ms Botting says. "For 55 years, I've always got memories of coming down here."

Ms Botting lived in Australia with her husband Arthur Chesterfield-Evans, for 23 years, but she returned often. And though the two relocated to Outram five years ago, Ms Botting says they spend less time at the crib than they ought to.

She says her husband never understood why her family would have a crib such a short distance from home.

She remembers her father leaving the crib to manage the stock at their Te Houka farm.

"My husband can't get his head around the fact," she says. "Why would you have a bach when you live 15km away?" he would ask.

"I was the one who had to leave. I could not stay in Balclutha," she says. "At the age of 3, I started running away."

But she says she has always loved Kaka Point.

"I love this. I love going down to the Nuggets."