Putting roots down for the future 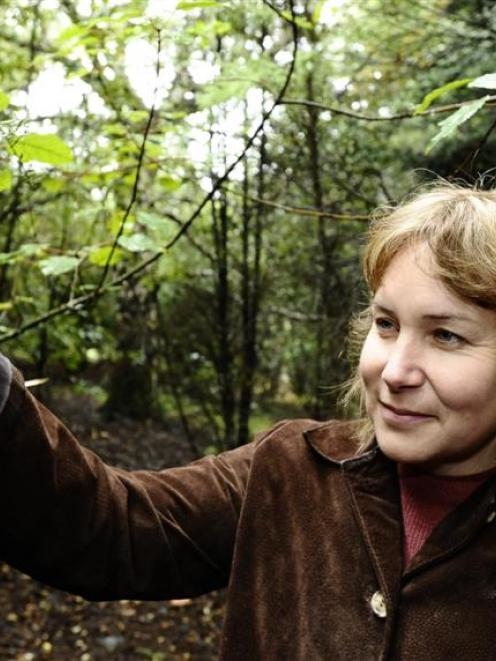 Lisa Burton, programme manager at the Otago Polytechnic School of Natural Resources, inspects a totara that is part of a revegetation project in the Craigieburn Reserve near Ross Creek. Photo by Gregor Richardson.
Planting days are the public face of revegetation projects. But that's when the hard work really begins. Kim Dungey reports.

Milling and farming, along with competition from weeds and animal pests, have all contributed to the loss of native forest in areas such as Otago Peninsula.

But Ms Burton says there are pockets of bush hanging on close to urban areas that could be "restored to better health" and there are several examples of people doing just that. They include not only large trusts and environmental groups but also private landowners and community groups.

Polytechnic students studying for the national certificate in horticulture regularly visit some of these areas, helping out and learning skills.

"It's one of the neatest things I do - getting the students involved and showing them what can be done; what people are doing. It's such a good news story."

The students began helping with revegetation 15 years ago but Ms Burton - programme manager for the School of Natural Resources - only realised the anniversary had rolled around when preparing for a recent Hort Talk at the Dunedin Botanic Garden (see below). 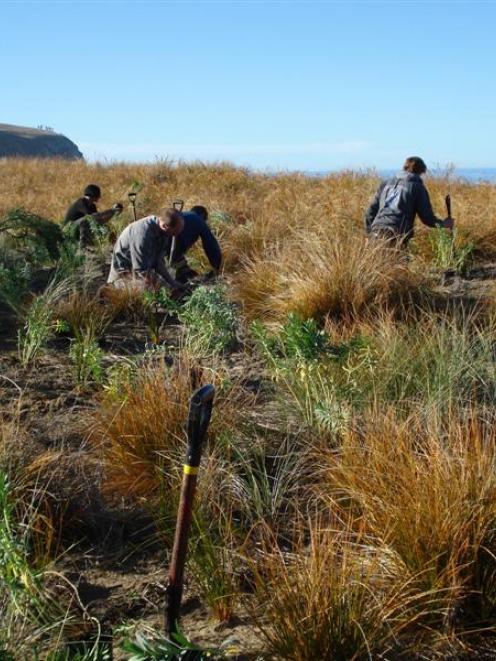 Otago Polytechnic horticulture students do planting at the Tavora Reserve in the Goodwood area for the Yellow-eyed Penguin Trust. Photo supplied.
The work is part of an increasingly popular sustainable horticulture module, which also covers the development of organic horticulture, permaculture principles and worm farming.

It includes working at Orokonui Ecosanctuary and with the Yellow-Eyed Penguin Trust to improve the habitat for the yellow-eyed penguin at the Okia, Tavora and Otapahi Reserves.

Another large-scale project students are involved in is at the Craigieburn Reserve, which Ms Burton describes as a "hidden gem" and one of the few areas close to Dunedin with mature rimu trees.

The reserve in Leith Valley is owned by the Dunedin City Council and the Dunedin Amenities Society. Open to the public, it contains 1.6ha of native forest bordering the Ross Creek reservoir and a larger area of farmland that has progressively been planted with native species.

Amenities Society member Paul Pope says the land was settled about 1860 by William and Elizabeth Rankin, who milked cows there.

After William died, Elizabeth married Edwin Tanner and together they decided not to remove any more trees from the bush.

Their love of trees was shared by Elizabeth's daughter (also named Elizabeth), who lived on the site for nearly 90 years and did not mill the trees despite being a widow with 10 children to support. As a result, the block contains 52 rimu with estimated ages ranging from 250 to 550 years old.

"Imagine the pressures of milking by hand," Ms Burton says of the pioneering family.

"They wouldn't have been well off. Even in those days, I'm sure milling timber would have earned them some money. But they resisted that pressure and the wider culture around them of 'cut it all down'.

"It was incredibly early conservation thinking that was way out of step with what was going on and that's why it's there today." Efforts to revegetate the area have sometimes had setbacks.

On one occasion, stock escaped through a fence and ate an entire year's worth of plantings, but that happens, she says.

"The plants have to survive on their own. It's not gardening ...

"There's always a risk of some plants dying but, in fact, the plants have grown really well."

Revegetation requires a plan and a long-term commitment, she says.

Eventually an area will look after itself, but that does not happen without fencing, animal control and weed control.

Finding volunteers to do the planting is often easy but there needs to be enough labour to do the weeding and site maintenance until the area becomes self-sustaining.

Seeds or cuttings from the local area will be more genetically adapted to the specific growing conditions, but retaining exotics for a while can be useful if they provide shelter or perching places for birds.

The benefits of putting back missing native plants and increasing the diversity of those that are there can include enhanced wildlife habitat, controlling erosion and creating an educational resource, she says.

Of the 2400 trees, shrubs and grasses that are known in this country, more than 80% are found only here.

"New Zealand has this extremely unique flora. If we don't look after it, who do we think is going to?"