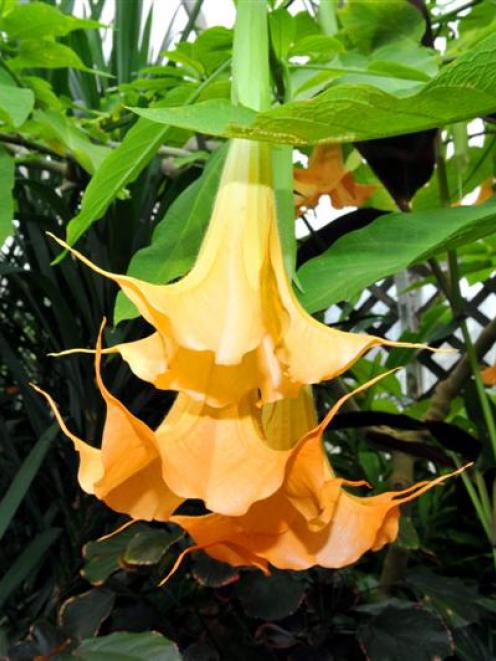 At times, the plant is laden with open flowers, making a stunning display and filling the east wing of the winter garden glasshouse with a lovely fragrance in the mornings.

The flowers are pollinated by moths.

Fragrance from the flowers increases as night falls, to increase chances of pollination.

Brugmansia are a little frost tender, but can be grown well enough outdoors in Dunedin to get a good flowering display, otherwise they are perfect for a conservatory.

A site that is sheltered from the frost and strong winds but receives good light levels is preferable.

Frost will knock them back but growth will shoot away from the base again in spring.

Alternatively, they can be grown in a pot, pruned hard back as temperatures cool and moved into a suitable environment.

Due to their tropical look they go well with brightly coloured flowering or foliage plants such as vireya rhododendrons.

Hibiscus and Impatiens would look just as good, or bright summer-flowering annuals, herbaceous plants or even roses.

Brugmansia are attacked under glass mainly by spider mites and caterpillars but not as much outdoors because of good air movement.

They like good, free-draining soil and to be fed regularly during the growing season.

• Stephen Bishop is curator of the winter garden glasshouse at Dunedin Botanic Garden.