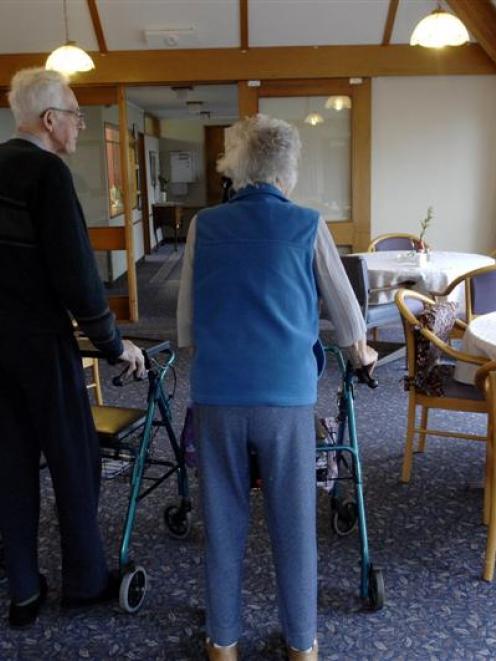 Two residents of Redroofs rest-home walk through the dining room. Photo by Linda Robertson.
The number of people in New Zealand aged 65 and older will surpass one million by the late 2020s, but what will become of the frail elderly? Kim Dungey reports.

"Get me out of here," Bea Johnstone sometimes tells her support worker when he visits her rest-home.

The 69-year-old interrupts her story to make her selection from the tea trolley - tomato sandwiches, fish sandwiches and coffee - then continues with a chuckle.

"But there's nowhere to go so I'm stuck here."

Six months after moving into Dunedin's Redroofs rest-home, Mrs Johnstone finally feels settled. She enjoys the entertainment and excursions. The meals are "lovely" and there is enough room for her craft supplies. Like fellow residents, she cannot fault the care she receives.

It's not that she doesn't want to be at Redroofs but that she wouldn't be in any rest-home if she could help it. 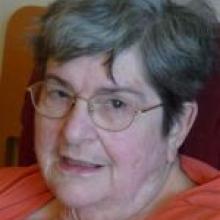 Bea Johnstone
It's a sentiment many can relate to. Few people look forward to going into care or even want to consider the options until faced with a crisis.

As a result, important decisions are often made in rushed and stressful circumstances.

While only 6% of the population ends up in residential care, numbers will rise as the population ages - the number of people aged 65 and older will surpass one million by the late 2020s, compared with 550,000 in 2009.

And with rest-home horror stories periodically making headlines, it's not difficult to understand people's concerns.

As one rest-home manager told us, the loss of familiar surroundings on top of previous losses - independence, a driver's licence, friends and financial support - can be difficult.

"It's a very fragile situation for new residents and often there's a little bit of misdirected anger towards family who `put them in there' or towards the facility staff." 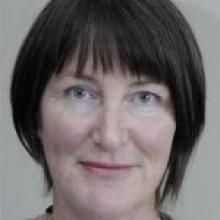 Nina Lunn
Redroofs manager Nina Lunn agrees, saying today's elderly grew up at a time when rest-homes "weren't that great" and were to be avoided at any cost.

However, once they have moved in, many realise it is not as bad as expected; there are many things that "add value to their lives" and, because they are being looked after, they don't feel as ill.

Most homes offer companionship and security. Residents get help with tasks that have become difficult, there are many activities to take part in if they choose to, and medical care is close at hand.

But the move is often the culmination of weeks of ill health.

"One spouse is the brains, the other is the legs, so, as a pair, they function well," Ms Lunn says. "Then one spouse dies and the other is left alone. It's too much for them and the gaps become obvious... Or people who have functioned quite well then become sick and find life tough being on their own. They fall over, are not able to remember to take their pills at the right time, are not eating ... and it becomes a real safety issue."

A frailer rest-home population is one of many changes Ms Lunn has seen in 25 years of working in aged care.

Elderly people used to be able to enter with little assessment of need so residents were more mobile, less sick.

Now they stay in their own homes longer, arriving at rest-homes when they are older and have more health problems.

"There's a lot more risk and you need to have more skill to look after them than you used to."

So how do you find a rest-home that won't make headlines for the wrong reasons?

"It's how it feels when you walk in," Ms Lunn says. "Whether or not the staff welcome you, how stressed everyone seems, the odour of the home."

Pay less attention to staff numbers, she says, and take more notice of their skills, how long they have stayed at the home and the number of hours a registered nurse is on the premises.

"Registered nurses play a huge role in the overseeing of care and if you don't have enough RN hours or a good registered nurse, that can up your risk."

Have a good look around, ask others how they have found various homes and involve the elderly person as much as possible, she adds.

"Although it can take time and the paperwork is overwhelming, it's worth doing it the right way because it does make it easier in the long run."

Helping the elderly to remain at home might be most people's preference but doing so can take a toll on family members.

Massey University health psychology student Barbara Horrell, of Oamaru, says many informal caregivers want to do everything possible to keep relatives at home but are burning themselves out in the process.

While much is heard about the elderly being supported to stay at home, Ms Horrell says government services are generally only a few hours a week and the bulk of care is provided by family, friends and neighbours.

Sometimes referred to as the sandwich generation because they are caring for their children and their parents at the same time, these people start off with the best intentions but find the task becomes more demanding and stressful.

Ms Horrell, whose PhD study into the health of caregivers is still in its early stages, says they need time for themselves without feeling guilty. She would like to see a "go-between" explain to each family what help is available and says giving the elderly a few days in a rest-home to see how it works could ease the transition.

There are options for those not ready for a rest-home. These include community-based models of care, such as Abbeyfield homes and retirement villages.

Abbeyfield, sometimes referred to as flatting for seniors, operates homes in Dunedin and Queenstown where it says people can maintain their independence with a balance of privacy, security and companionship.

Dunedin chairman J. B. Munro says the 1000 homes in 18 countries have been deliberately built on a small scale - the Dunedin one has eight bedrooms, each with its own ensuite. A live-in housekeeper provides meals and cleans the communal lounge, kitchen and dining area.

Friendship and security are also offered by retirement villages where people can be independent but not alone, says Malcolm Hendry, the Otago-Southland member on the New Zealand Aged Care Association board.

The decision to move to one is similar to that made by tertiary students who leave school, decide to be a student and move to North Dunedin to be among similar people, he adds.

"By no means is it the final stage in your life. It's just another phase you go through and it's a choice that you can make to be amongst people who are like-minded and who are doing possibly similar things to yourself. It gives you a sense of community."

Mr Hendry is the chief executive of Chatsford village, at Mosgiel, which by late next year will have 81 apartments and 185 townhouses, making it the second-largest retirement village in the country. He also heads the Birchleigh Residential Care Centre - Chatsford residents have priority access to its 80 rest-home, dementia and hospital beds.

One thing that has changed since Chatsford opened in 1991 is the increasing demand for larger homes, he says. The original townhouses had two bedrooms but the newest ones are almost all three-bedroom and about 140sq m. Residents want to be able to have family to stay, often use the third bedroom as an office and sometimes continue to work from home.

The amenities, which include a tennis court, mini-golf, indoor and outdoor bowls, croquet and petanque, encourage residents to keep active and it is not uncommon to see people in their mid-80s going to the heated indoor pool twice a week for aqua fitness classes.

"We encourage a sense of fun for the residents coming in," he says, adding people can choose whether or not to take part in the "huge" number of weekly activities.

Back at Redroofs, Bea Johnstone is describing how a typical day in the Oceania Group facility starts with breakfast in her room at 7.30am. She knits while waiting for help to wash and dress. Then there are devotionals, old-time music and sing-alongs, outings in the van. Recently she made 65 cards for a Valentine's Day celebration.

Four months shy of her 70th birthday, she is one of the home's younger residents. "The dear old lady in the room next to me calls me kid," she confides. "It amuses me greatly."

"I had to get used to being amongst so many people and that wasn't easy. Some days I'd be really happy and enjoy the activities but other days, I just stayed in my room.

"But, overall, the move has been a good one. I've had to make the most of it."

Fellow resident Natalie Locke (79) says it hurt her pride when her daughter said she would have to move to a rest-home. She had been having falls but knew that she was not particularly sociable.

A year on, Mrs Locke is tenaciously holding on to as much independence as she can but can see the home's good points - she likes the staff and the atmosphere. Husband Tom visits regularly.

"I am settled ... but if I struck Tatts or Lotto, I'd be off on a sea cruise," she says, eyes twinkling.

Like several others, Joy Newton had an adult child choose a home for her.

"It was so homely when I stepped inside the door, that I knew he'd made the right choice ... I settled in quite quickly. The staff are lovely and that made a big difference. I felt as though I was wanted."

Mrs Newton (88) says older people should make up their own minds about what they want before it's made for them and need to be in control of the process, but rest-homes can be lots of fun.

"It's really nothing to be afraid of. It's just another way of living." 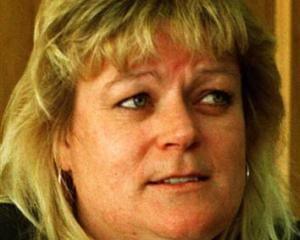 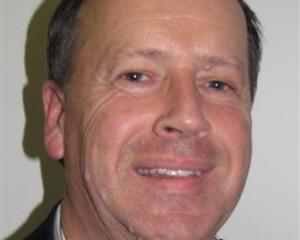 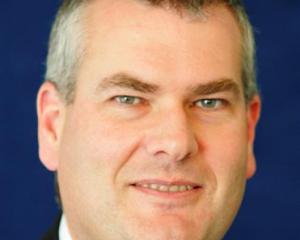 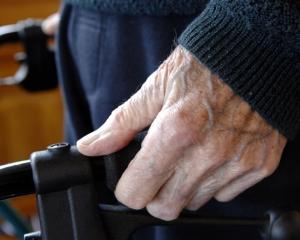 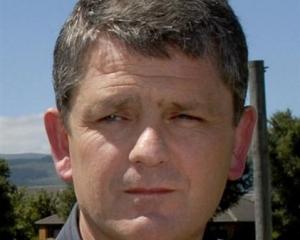 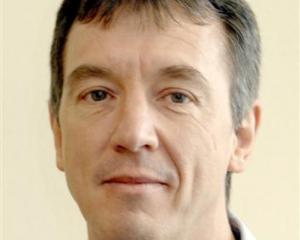