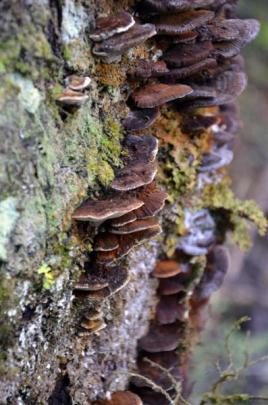 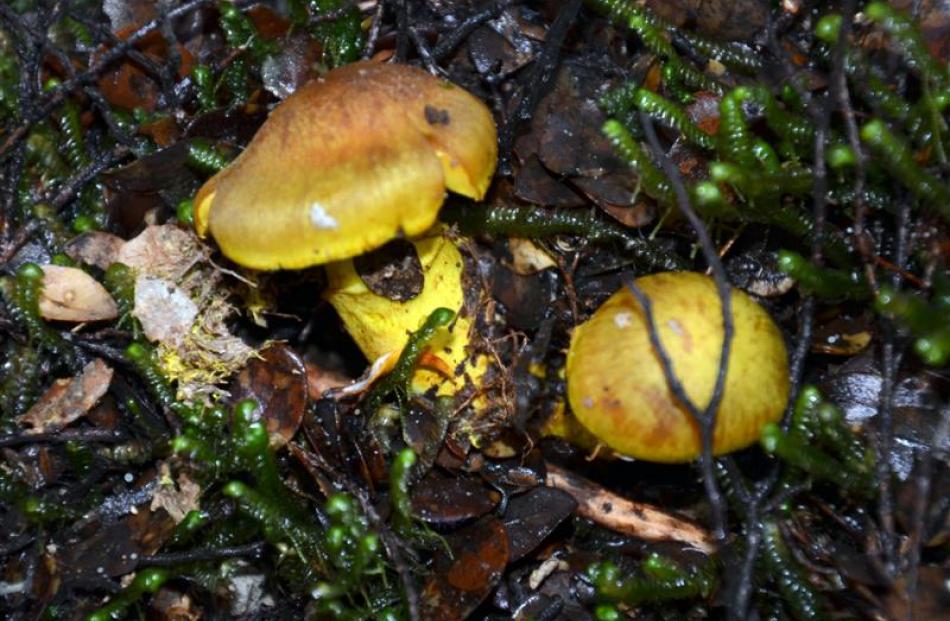 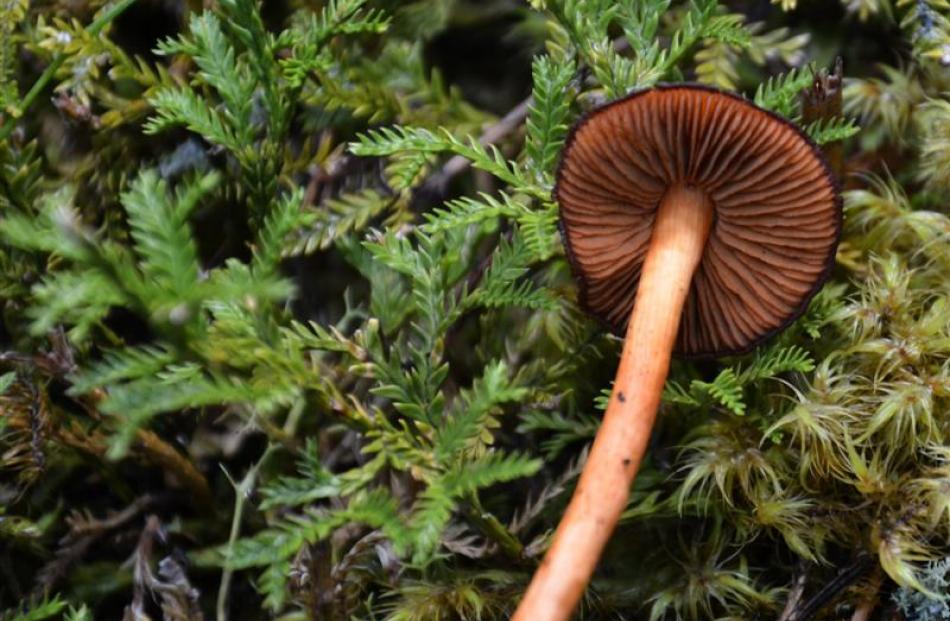 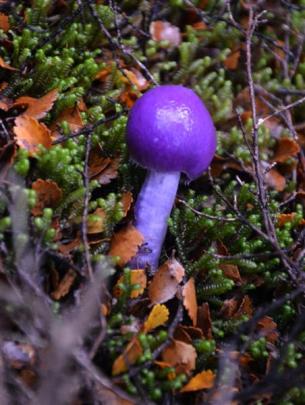 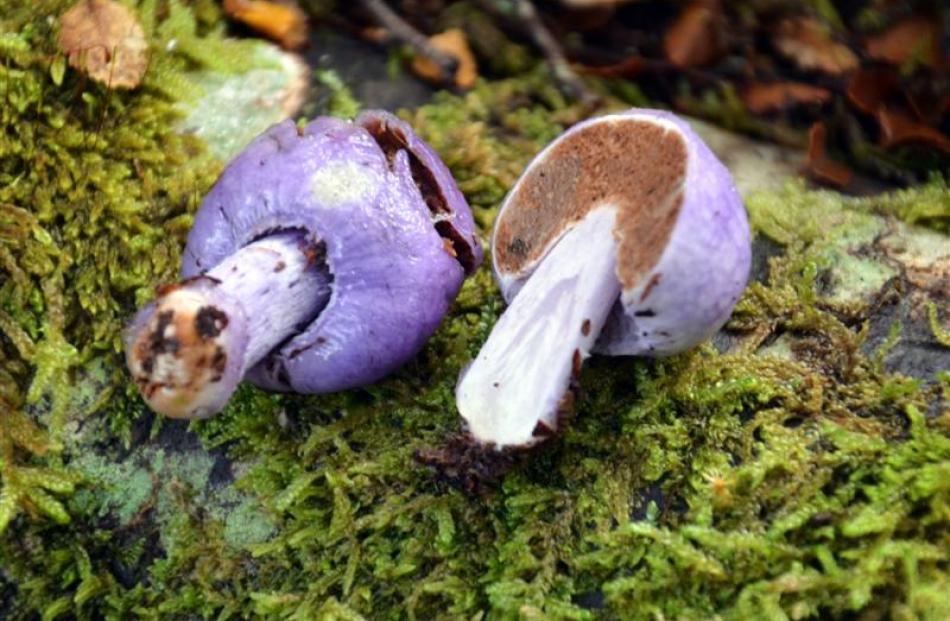 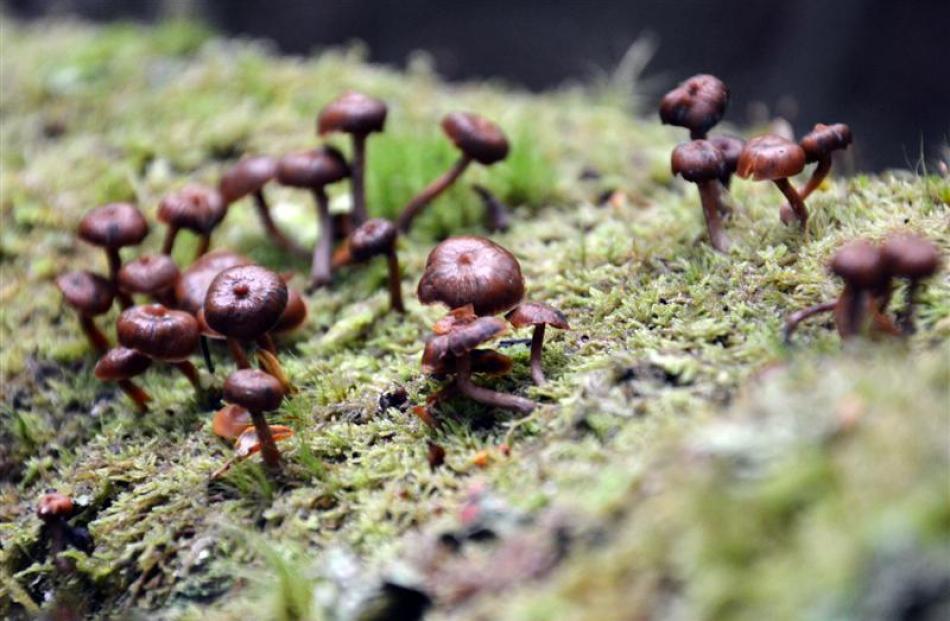 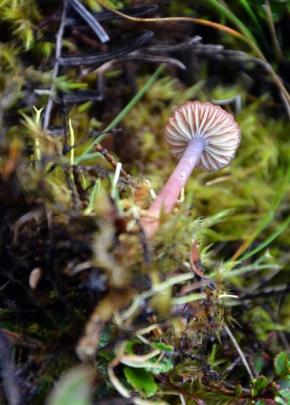 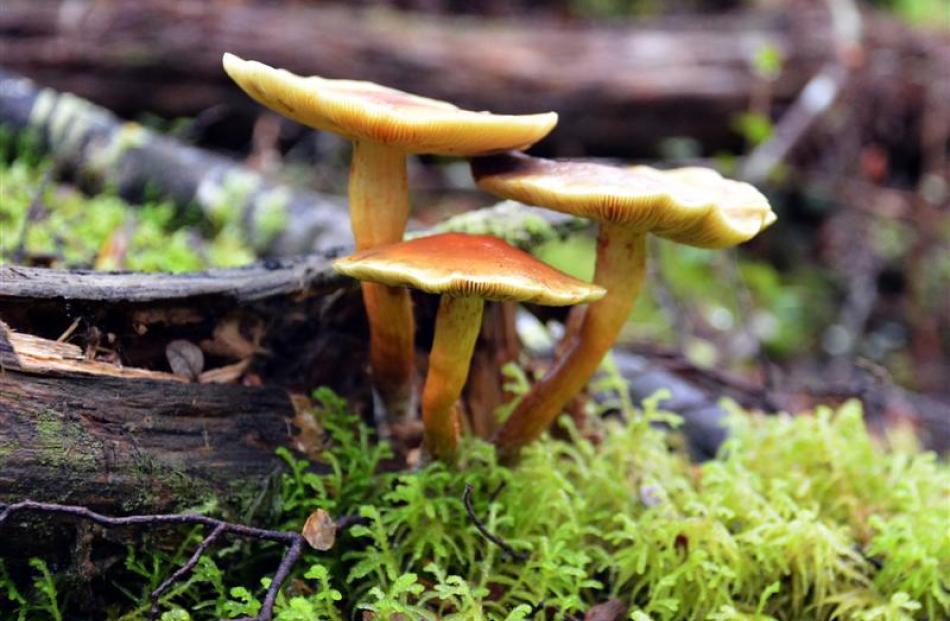 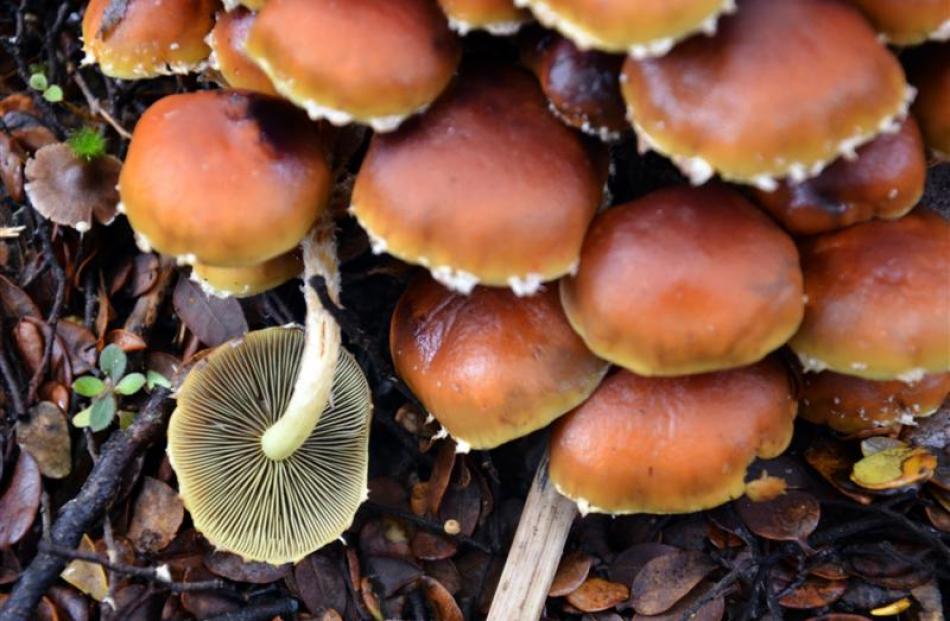 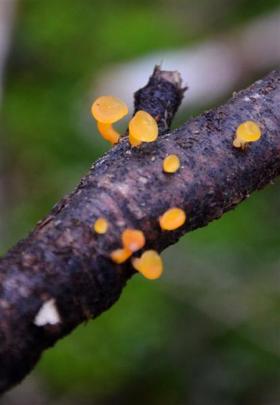 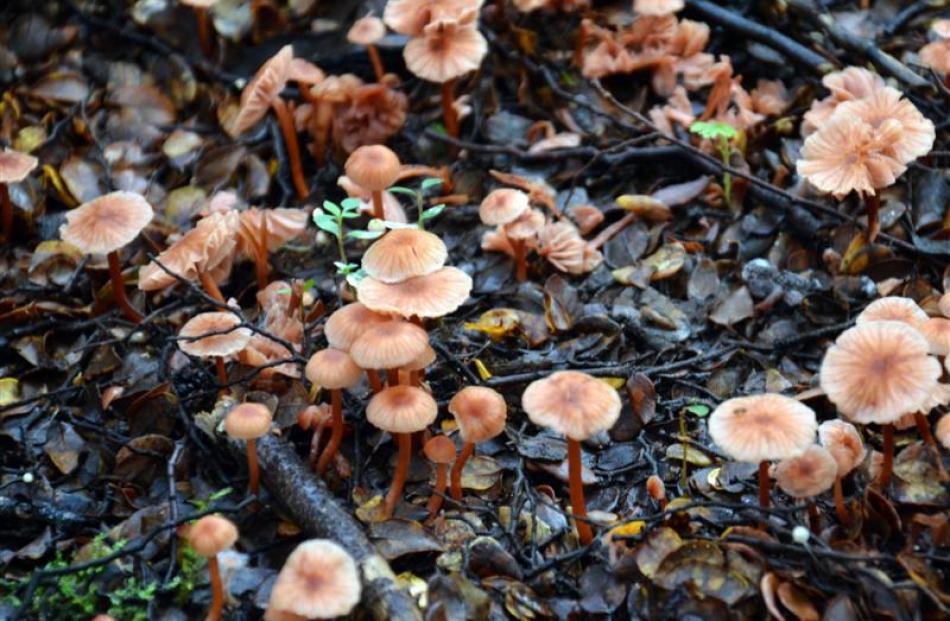 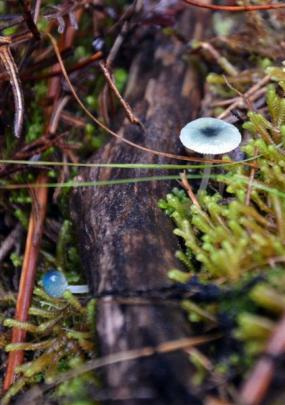 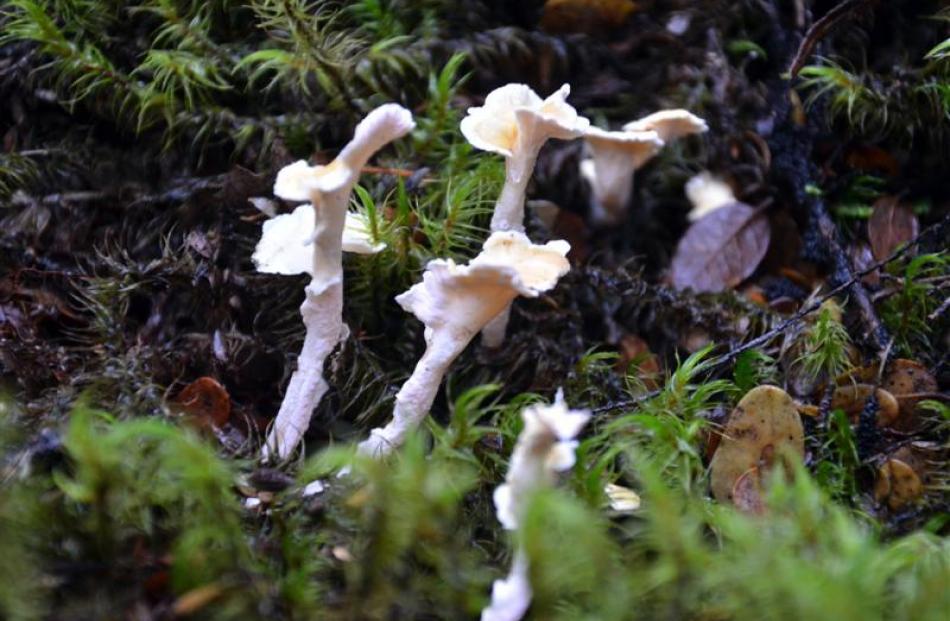 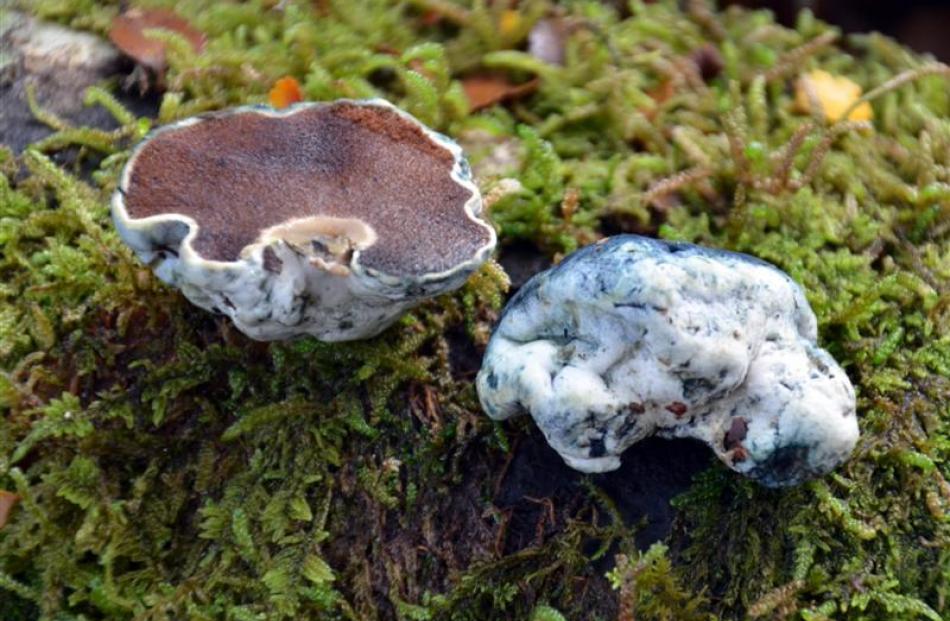 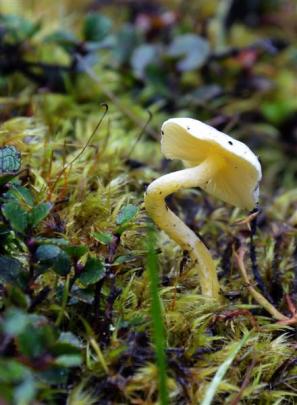 It was late when the Otago Daily Times journalists arrived at the Globe Backpackers in Riverton, Southland.

In the quiet corridor, a pair of hard-living boots sat outside every dorm: damp, smelly, no doubt teeming with microbes.

The footwear was a sign some serious mushroom-hunters had colonised the place; a good sign, for we were in town to cover their annual national fungal foray.

The foray is the main event for the Fungal Network of New Zealand (Funnz), a society of mycologists and mycology enthusiasts.

Up to 50 people gather for a week every autumn and rove the surrounding landscape in search of fungal forms to study.

This has been going on since 1986. Reports of earlier forays on the society's website tell of treasures past.

From Wainuiomata, 1997: "Most interesting find here was Phallobata alba, a white fungus of jelly-like consistency made up of erect lobed fingers."

In Rotorua in 1994, the haul included a fungus that infects and slowly mummifies caterpillars.

In Ohakune, 2005, "we were excited to find a wonderful display of stinkhorn".

And then came Riverton, May 2012. Into the woods and off to the beaches they went, the forayers.

In the beech forest above Lake Monowai, their hardy boots carried them off the designated track, into boggy terrain, snooping under logs for bright-orange slime moulds and even high into the branches of a tree for a frilly white blob called Tremella.

They had come from Kingston, Dunedin, Auckland, and further afield: the New York Botanical Garden.

"This is just like a different planet; it really is," said Dr Roy Halling, the New Yorker.

"I don't know what to stop and look at next." Most who attend the forays have an area of special interest. Dr Halling's was the group of mushrooms known as boletes, which have pores rather than gills.

He gave particular attention to a truffle-looking bluish-white mushroom which, when ripe, has a chocolate-brown centre.

It is Rossbeevera pachyderma, recently placed in a new genus named after New Zealand mycologist Dr Ross Beever, who died in 2010.

"Because it is restricted to New Zealand, it's exciting to see it," Dr Halling said.

"I like to see a country's iconic fungi, and that's one of them ... When I travel overseas it's exciting to see the iconic entities; you know, like seeing the kiwi in New Zealand and the kangaroo in Australia.

"What's interesting is, as far as the boletes are concerned, there are very few that are associated with beech in the world, but you've got a few here.

"So from my standpoint, it's of interest because you don't find very many with beech, and when you do they're unique."

When scientists talk about mushrooms being associated with trees, they are not referring to mere coincidence, or a sort of habitual friendly acquaintance.

If a Rossbeevera pachyderma fruit body is spotted near beech, it is because the fungus has colonised the roots of the tree, in a relationship known as mycorrhiza (meaning fungus-root).

Mycorrhizae are symbiotic relationships: the fungus extracts carbohydrates produced by the tree, and the tree can better absorb water and nutrients because the fungus effectively expands the surface area of the tree's roots.

This millennia-old evolutionary tango is starting to be understood as vital to forest life.

The University of Otago contingent on the foray, headed by senior botany lecturer Dr David Orlovich, was especially interested in Cortinarius, probably the largest fungal genus, all species of which form mycorrhizae.

Several hundred Cortinarius species have been described in New Zealand, meaning they play a very significant role in native ecosystems through their intimate bonds with indigenous plants.

Dr Orlovich, who is also the president of Funnz, is making a long-term inquiry into "how they contribute to helping the forest survive and grow".

"The trees rely on these fungi.

"They probably increase the nutrition of the plant, but I mean, no-one's even really begun to ask these sorts of questions."

Think of a toadstool and you probably think of Amanita muscaria, commonly called fly agaric: those large red ones with the white spots, white gills and white stalks.

This species has travelled the world with forestry pines and has become common in New Zealand. Its success here and elsewhere is partly because it is a free-love fungus, forming mycorrhizae with many species of tree, whereas other fungi are fussier and often exclusive.

Mycologists are watching its spread warily: they are concerned the fly agaric may be displacing native fungi, including Cortinarius species, and so disrupting their relationships with native forests.

What that would mean for the health of the forests is not known, but a reduction in native diversity is implied.

During the 2012 foray, Amanita muscaria was found growing on the roots of southern beeches at Lake Hauroko; the farthest south that association has been observed.

"So that was not such a good find," Orlovich said.

Finds from the Southland foray: 400 fungal specimens, of which 105 are to be added to the Otago botany department's herbarium.

The herbarium houses about 50,000 dried specimens of plants and fungi, and is second only to the New Zealand Fungal Herbarium at Landcare Research in Auckland.

Some specimens are modest and familiar mushrooms, others are newly noticed species, and yet others are veritable celebrities.

One mould collected near Riverton was Tolypocladium inflatum, which produces cyclosporin, the immunosuppressant drug that makes human organ transplants possible.

It was found on a hunk of old wood at Moore's Bush Reserve by Dunedin mycologist Dr Toni Atkinson.

"You would never guess, would you?" said Dr Atkinson, bringing the historic "white fuzzy spots" into focus under a microscope.

A fungus' journey to a herbarium starts in the field, where collected specimens are wrapped in paper and placed in a sack.

They are then taken back to a makeshift laboratory - sometimes meaning rows of microscopes in a disused restaurant or the local RSA hall - at the foray base camp.

Mushrooms don't keep for long, so the documenting process takes place immediately after the day's gathering. No rest for the forayers, then.

Sitting with a beer in front of a microscope in the Riverton RSA, about 10pm, Dr Halling explained: "After collecting, which is the fun part, you have to sit down and document the fresh material, because if you don't, it will rot and lose all of its characteristics.

"Basically you sit down and just document everything that you collected. If you haven't photographed it in the field, then you have to photograph it here.

"So you just kind of turn your mind off to the exciting things and do the drudgery work."

Some specimens are discarded, but most are identified, recorded, entered into a database, and then dried for their future in a herbarium.

If mycologists from herbariums in Auckland, Canterbury and Otago all covet a certain fungus but the sample is not large, they will share the mushroom specimens, sometimes even slicing a fungal fruit in half: fair play at the foray.

That's what comes from having a common goal Dr Orlovich defines as "describing all the diversity of these forests".

Fungal diversity in New Zealand constitutes tens of thousands of species, perhaps just a quarter of which have been thoroughly documented and described. The boots of the nation's forayers have a long march ahead.

"What's this thing?" you'll say, holding up a blue thing.

"Mycena interrupta," will come the reply. Or you'll say, "What's this thing?" holding up a yellow thing.

The mycologists seem able to call upon vast mental image-databases, but where instant recognition is not possible, they have numerous ways to identify a given mushroom.

Colour: This can help in narrowing a mushroom down. Boletes, for example, often stain blue as they mature, while members of the Hypholoma genus always have a green colour to the gills.

"And the first time I found that, I didn't really know what it looked like, but one of the things you do is pick up the mushrooms to smell them because it makes you look really professional.

"And I picked this thing up and it smelt really obviously of cucumber, and that was the first thing that made me think, 'Oh, maybe its cucumeris', and sure enough it was."

Texture: Waxgill mushrooms "have brittle flesh with a waxy feel when crushed between the fingers", according to Landcare Research's online fungi guide. A white waxgill found above Lake Monowai met this description, so brittle and delicate it crumbled in transit back to Riverton.

Spores: Placing a fragment of the spore-producing part of the mushroom, such as a piece of gill, under a microscope will provide a view of its spores, which can be determinative.

Cortinarius species always have brown spores. Entoloma always have pink, angular spores. Dr Orlovich described "rough brown spores, and the spore looks like a lemon, and there's a little clear bit up the top of the spore", as traits of the Galerina genus.

DNA: Even if a mushroom has been identified as one thing for decades, it is still subject to reclassification if DNA sequencing pegs it as closer to something else. One of New Zealand's "iconic" mushrooms, Cortinarius porphyroideus, which looks like a half-sucked purple lolly, is so famous it once appeared on our $1.50 postage stamp - but that was back in 2002, when it was described as Thaxterogaster porphyreus. 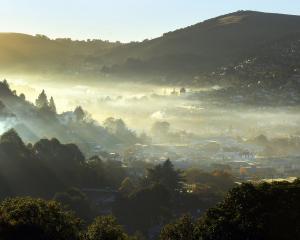