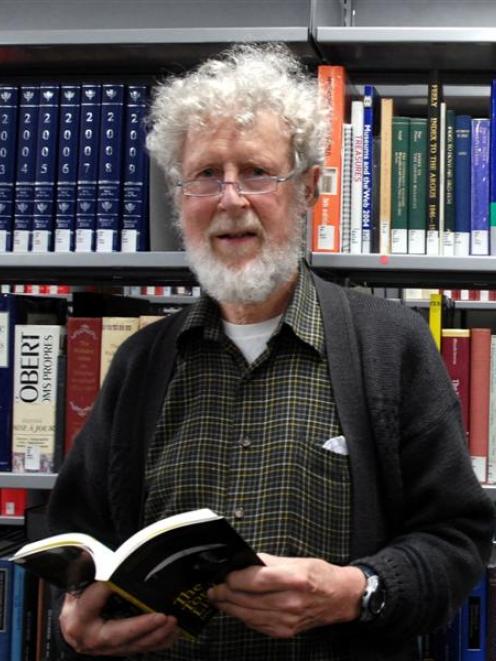 Prof Jim Flynn with a copy of his book in the University of Otago central library. Photo by Gerard Richardson.
Prof Jim Flynn has been lecturing students for more than half a century. Over that time, he has taken note of the fact even his best students haven't been reading great literature. So he's decided to do something about.

An emeritus professor of politics at the University of Otago, an expert on intelligence and IQ who has been described as one of the most interesting and independent thinkers of his generation, Prof Flynn has written a book - about books.

The Torchlight List, which will be published on December 2, is an attempt to persuade people, particularly (but not exclusively) young people, to read great works of literature.

Subtitled Around the world in 200 books, Prof Flynn's project provides a roadmap to navigating everything from classic works such as Leo Tolstoy's War And Peace and Anna Karenina to John Gribben's The Big Bang, which explores the intricacies of post-Newtonian cosmology, to Evolution In Action by Julian Huxley, brother of Aldous (whose After Many A Summer Dies The Swan is included in the book along with three of his other works).

Having started lecturing at the age of 23 at Eastern Kentucky State University (he is now 76 and has spent more than four decades teaching at Otago), Prof Flynn not so much suggests as expounds the view that reading such books will provide a far better education than any university.

It should be noted that Prof Flynn doesn't urge would-be exam-goers to ignore their studies; in an age of ever-increasing demand for higher-education credentials, one must tick whatever boxes are required to enhance the chance of employment. However, he does point out there's a marked difference between the concept of advancement (e.g. get capped, get a career) and the acquisition of knowledge.

Take the book's title: The Torchlight List refers to the nature of his Uncle Ed's self-education; likewise that of his father, Joseph.

"My father was born in 1885 and when he left school at 13 the sixth grade was sort of the average for Americans," Flynn explains earlier this week. "He became a self-taught journalist and managed to make his way. My Uncle Ed ... they needed officers in World War 1 so he educated himself by torchlight on a boat so he could qualify to be an officer.

"Today, of course, that sort of thing would be utterly impossible. While you can educate yourself without formal university training, it is much more difficult to advance," he says.

He may have written The Torchlight List over the past 12 months, but Flynn has been doing something similar for many years, providing departing students with lists of suggested books.

Approached by Awa Press to do a "how to" book on philosophy, he initially declined but suggested penning a selection of 100 books "that would allow people to come to terms with the modern world".

"When I came to attack it seriously, I found I had to expand it to 200. Of course, they are not all books: there are about 160 novels, maybe 15 or 20 histories, some films, some plays and a few poems."

There are also quite a few books that rate a mention despite not featuring in Flynn's top 200.

"Some of those are, historically, very informative, like Ignazio Silone's Bread And Wine. It was the first book that revealed what Mussolini's fascism meant, but it is not a great novel and not even a very good novel. Its literary merits are very mixed.

"I discuss a number of novels and suggest you might want to read them for their informative content, but I can't promise you'd enjoy reading them as much as the others. I'm sure everyone will pick and choose - as they should. Some people won't want to read about the history of science or astronomy; it just won't interest them.

"Almost anyone is going to find 50 books in there that they didn't know about that will appeal."

However, some words of caution: "You don't want to just breeze through them; these are books you want to think your way through".

Flynn intends his book to be the first in a salvo, a trilogy aimed at giving people a breadth of knowledge.

Following The Torchlight List, which would give readers "sufficient facts about the modern world not to feel bewildered by it"; he hopes to release another that offers 20 key concepts "so when you are bombarded by information you can analyse it; such as the concept of a market; three concepts to help you understand international relations; a bit on social science methodology ...

"The third book, which I've just finished - I don't know who will publish it, if anyone - essentially says, everyone has a philosophy; why not be reflective about what you believe? You either assume God exists or you don't - here are the arguments."

Collectively, the books are intended to liberate readers. At the start of The Torchlight List, Flynn features a quote from Italian author Ignazio Silone: "You can live in the most democratic country on Earth, and if you are lazy, obtuse or servile within yourself, you are not free".

Flynn suggests extending the quote to include, "and if you do not love reading".

Yet a person can learn to love reading, he stresses. The key is time. Read a book for 40 minutes before bed; not only might it clear your mind of the day's stresses, it could improve your vocabulary.

In 2008-2009, while at the Russell Sage Foundation, Flynn studied test trends of vocabulary used in everyday life (as opposed to specialised terminology) in the United States. Between 1848 and 2006, adults had made huge gains but schoolchildren, including teenagers, had made only marginal improvements.

Flynn concludes there is a growing gap in the active vocabulary of teenagers and that of their parents. "Active" refers to the use of words to initiate a conversation as opposed to "passive", which means words that are understood when used by someone else.

The good news is the damage is not permanent. "They make up some of the gap if they go to university, and a few years after they have entered the world of work they make up the rest," Flynn writes.

Still, he laments a teenager subculture which, he says, bombards its members with visual stimuli and puts little priority on reading works that require concentration and a wide general knowledge.

"When I was a kid and was bored, I'd pick up a book," Flynn says. "Now, they flick on to the internet, which is a great pity. I don't think the internet, randomly sampled by subject, gives you what great literature does.

"You can pick up facts. You might find that people in rural China were poor in 1970. Yes, it's one thing to see the statistics, but it's another thing to read a book [The Vagrants, by Yiyun Li] in which a young girl has found that if she follows someone putting up posters she can lick the glue off - that brings it home what rural poverty really meant. The paste had flour in it.

"Literature brings home a sense of empathy with people in a way that social science or anything you get on the internet doesn't. We are bombarded with a lot of information, most of which people can't assimilate or criticise."

Regarded as an international expert in the field of intelligence because of his work identifying a steady rise in overall IQ scores - a 1981 discovery dubbed the "Flynn effect - the bookworm, moral philosopher and political scientist (in no particular order) says if he had a choice between raising a child's IQ by 12 points or fostering a love for literature, the decision would be a no-brainer (no pun intended).

A contender for best quote in Flynn's book: "People often ask me how to raise the IQ of their children. I tell them to not aim for anything so trivial".

Yet developing a taste for the written word in one's offspring requires commitment.

And children aren't stupid, Flynn warns. Sigh or perform that pre-sleep routine perfunctorily, show them reading is a duty, and you risk ingraining in that child a disdain for books.

"I know many parents do their best. They just don't love reading and try to surround their kids with books. But the best thing is to love reading yourself.

"A parallel I give in one of my other books is that there is a difference between a parent whom the child sees talking to others about books and a parent who says, `oh, you got an A in English', but is really excited about whether you made the rugby team. You know where that parent's priorities really lie."

The Torchlight List's suggestions of books covering history, science, philosophy and psychology, among other subjects, require a certain benchmark in literacy skills. Which begs the question: in his attempt to create a helpful starting point for people to explore both society at large and their own inner world through literature, is he in danger of preaching to the converted?

"I would think anyone with a decent university education could read any of those," Flynn responds.

But what about the rest of us?

"You'd be surprised. There are people in my running club... Bill Kenny, who runs with me in the Leith club ... he's always been a plumber and he remarks to me about the things he's reading, including histories and novels about World War 2.

"I think anyone with a good high school education could read most of those. After all, what extra did a university education give them often, except a lot of knowledge of conveyancing?"

To start you on the path to literary enlightenment, Jim Flynn suggests reading the following five books:

• The Slave, by Isaac Bashevis Singer
• The Bridge of San Luis Rey, by Thornton Wilder
• The Great Gatsby, by F. Scott Fitzgerald
• Spark Of Life, by Erich Maria Remarque
• End As A Man, by Calder Willingham

Says Flynn: "You run into kids who say, `I just don't like reading - it bores me'. I always say to them, 'try these five'. If none of them appeals, they are probably so turned off reading that nothing is to be done. I haven't found anyone who hasn't enjoyed one or two of them."

The Torchlight List: around the world in 200 books (Awa Press,$33, pbk) will be published on December 2