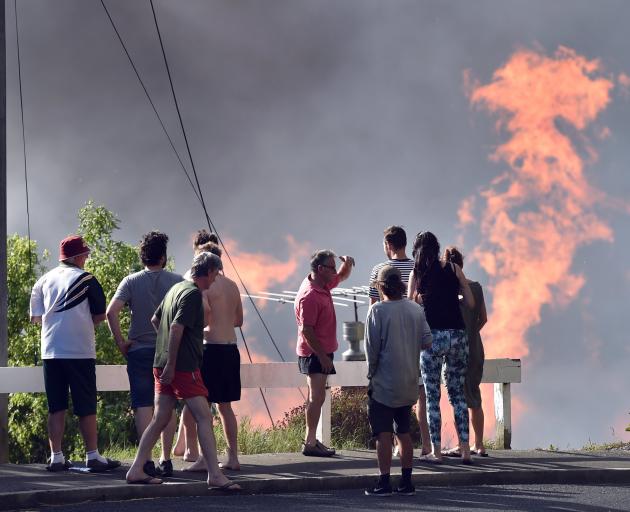 Record temperatures had turned Dunedin into a tinderbox by the end of January this year. Firefighters knew something was coming.

Then it arrived. Flames raced through Burnside, destroying property and livelihoods, raining fire on homes in Concord.

It had been yet another 30degC day, with low humidity. All that was needed was a match.

The following day, emergency services were sandbagging low-lying Dunedin properties as the remnants of tropical cyclone Fehi blew through, dropping up to 18mm of rain an hour and more than 100mm in total. Untreated sewage was flowing in the streets. A state of emergency was declared and a year on, authorities are still cleaning up the mess.

So the scientists were right, increasing greenhouse gases in the atmosphere is warming the planet and making for a more volatile environment; the COP 21 Paris Agreement came not a moment too soon and New Zealand must now act to address its greenhouse gas emissions, just as almost all countries are doing.

Here in Godzone, there's a flurry of activity round that goal, focused on the coalition Government's proposed Zero Carbon Bill.

As per the Government's publicity material, the Bill "sets the long-term commitment to transition us to a low emissions, climate-resilient economy. It puts in place the core building blocks that will give certainty to New Zealanders that, no matter what government is in power, there will be a long-term approach to climate change that endures political cycles".

New Zealand has work to do; the country's greenhouse gas emissions due to human activities have increased by 64% since 1990. The commitment New Zealand made in Paris in 2015 was to reduce emissions to 11% below 1990 levels by 2030. 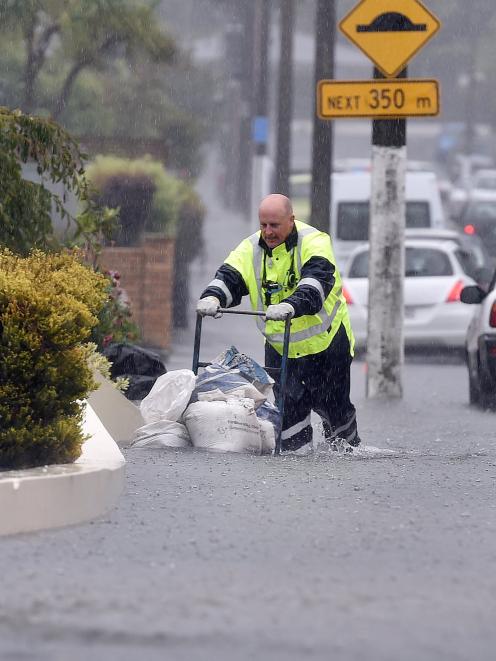 An emergency worker places sandbags at Radius Fulton rest-home during February flooding. Photo: Peter McIntosh
Among a deluge of recent work on the Bill, the new Parliamentary Commissioner for the Environment, Simon Upton, has issued a report, A Zero Carbon Act for New Zealand: Revisiting Stepping stones to Paris and beyond; the Productivity Commission has issued its draft report Low-emissions economy; the Climate change adaptation technical working group has completed a recommendations report, Adapting to climate change in New Zealand, that "emphasises the urgency for action"; and Prof Dave Frame, director of the Victoria University-based New Zealand Climate Change Research Institute, has co-authored a report on how to handle different greenhouse gases.

The views expressed in those reports will doubtless help shape the final form of the Bill, which the Government hopes to have in place by the middle of next year.

The reports agree on much. It is generally accepted the emissions trading scheme (ETS) will be retained, but reformed so it begins to have an effect. The discussion document that accompanies the Bill also anticipates a carbon-budget setting process that looks sufficiently out into the future to remove politics from the process as much as possible. That is pretty much unanimously applauded.

Under the Bill, a Climate Change Commission would be set up to advise on how the country shifts to a low-carbon footing, and set carbon budgets (how much greenhouse gas we can emit) into the future. It is proposed that it would maintain three five-year carbon budgets at all times, together looking 15 years out into the future.

As Upton said in a recent address, "when we know that within an increasingly limited timeframe we have to decarbonise our economy - and have signed up internationally to that - we can't have our long-run objectives hijacked by short-term politics".

Most contentious so far is what New Zealand should do about its particular mix of planet-warming gases.

Consultation is around three options, all variations on a target of significant cuts by 2050:

1. Net zero carbon dioxide: which would mean reducing emissions from energy and transport in particular.

2. Net zero long-lived gases and stabilised short-lived gases: CO2 and the likes of nitrous oxide would have to come down; and short-term gases such as methane would need to be reduced.

3. Net zero emissions: This is framed as most ambitious in the consultation document, and involves reducing all greenhouse gases to net zero.

The report co-authored by Prof Frame argues that short-term gases such as methane should be treated differently, because they behave differently, but not ignored. That places him somewhere between options two and three.

He told RNZ treating them differently clarified what was required to stop warming, and would reallocate effort towards reducing CO2. That, he says, is the right approach.

Its warming pulse over a 20-year period is 86 times that of a like quantity of carbon dioxide.

Growth in methane emissions will do more short-term damage than growth in any other gas, Fitzsimons wrote in an article for the Spinoff website.

We need to do as much as we can to reduce warming as soon as we can.

"Rapid reductions now, taking advantage of all the easy options right away, then slowing down the rate when things get harder, will warm the climate less by 2050 than waiting till the last minute, then taking extreme action. If our goal is zero by 2050 it is the total amount of carbon put into the atmosphere by then that matters," Fitzsimons wrote.

On that basis, the best course of action is to move fast, cut methane emissions to a much lower level, and hold them there. Delaying such action means having to cut more later.

In its submission on the Zero Carbon Bill, Wise Response says the way different gases are treated is a complex issue that is important to get right. For this reason, they say the Climate Change Commission, once established, should be given the task of recommending how short- and long-term gases are treated in order to best achieve New Zealand's 2050 target.

Studies elsewhere also support the approach of taking firm action earlier to head off the worst impacts of climate change. Among other benefits, it could reduce economic damages. A recent study in the journal Nature predicted $US30 trillion in cumulative benefits from limiting warming to 1.5degC, relative to 2degC; far outweighing the costs of mitigation action.

What all this means for the average consumer can be hard to pin down. Estimates for the price of a tonne of carbon in the Zero Carbon Bill consultation document vary between $76 and $845. Businesses could pass on all or part of the transition costs. For example, a litre of petrol produces 2.3kg of CO2, so the price of a litre of petrol could go up by about 23c for every rise of $100 per tonne of CO2.

The thinking is that the rising price of petrol will persuade people to look at alternatives; active and public transport and perhaps an electric vehicle.

Just how a price on carbon will affect everday lives will be influenced by, among other things, the regime put in place to regulate it (See separate story).

Beyond such immediate concerns is a bigger issue, highlighted in Wise Response's submission on the Productivity Commission's draft report Low-emissions economy.

The Productivity Commission assumes the way forward means shifting the economy to a more sustainable footing in order that it can continue to grow.

Its terms of reference talked about transitioning "towards a lower emissions future, while at the same time continuing to grow incomes".

The Zero Carbon Bill consultation document also looks at growth rates out to 2050 given various responses to cutting emissions, and estimates GDP increases could range between 2.2 and 1.5, depending on what is done.

Wise Response challenges this thinking, suggesting the Productivity Commission's work needs to include consideration of the limits to growth; how much more we can demand of the Earth's finite resources.

If the world were to move away from the booming material growth of the 20th century, that would help head off the threat of climate change that has emerged in lock step with that economic expansion, it suggests.

As energy resources become more scarce, it is a future we should prepare for in any case, Wise Response believes.

Climate Change: Why, when and how do we respond?

As part of the NZ International Science Festival, Wise Response is hosting a discussion on the impacts of climate change and what is to be done.