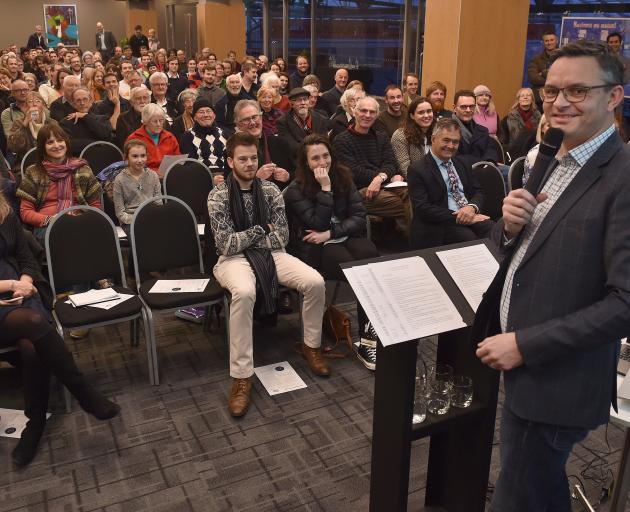 Minister for Climate Change James Shaw speaks at a consultation meeting on the Zero Carbon Bill, at Forsyth Barr Stadium, last month. Photo: Peter McIntosh
The Wise Response Society - a coalition of academics, engineers, lawyers, artists, sports people and others - believes the target in the Zero Carbon Bill must be to reduce net emissions across all greenhouse gases to zero by 2050.

It is the the third of three options in the Government's consultation document on the Bill.

Wise Response argues that the climate does not distinguish between different greenhouse gases: carbon dioxide (CO2) from cars, methane (CH4) from livestock, or nitrous oxide (N2O) from fertiliser and manure. They all warm the planet.

Net zero emissions means the warming effect on climate by the greenhouse gases emitted as a result of human activities in New Zealand, is zero. This could mean, for example, cutting CO2 emissions from transport and generation of electricity to zero, stabilising methane at much lower levels, cutting N2O to zero, then using carbon capture in forests, other vegetation plantings and soils to offset the balance.

Wise Response is particularly concerned we might fail to heed the obvious signs that it's time to get serious: that is, more extreme temperatures and increasing rates of sea ice and glacier melt, large volumes of methane emitted from thawing Arctic permafrost, heatwaves on land and in the sea, hurricanes and wildfires. These realities are often framed in terms of a growing risk of crossing irreversible climate tipping points.

In its strongest warning yet about the dangers of climate change, the UN's Intergovernmental Panel on Climate Change (IPCC) said in its Fifth Assessment Report that only "rapid and far-reaching" changes to the world's economy would prevent temperatures from rising 1.5degC above pre-industrial times. Beyond 1.5degC of warming, the risk of climate change impacts on ecosystems moves from moderate to high.

In this context, Wise Response believes it is hard to see the wisdom of adopting a "middle way" to reducing emissions.

Given the complexity of the issue, Wise Response says the Climate Change Commission proposed under the Bill should be given the task of plotting precisely how New Zealand hits its net zero emissions target.

The commission could then put the choices before Parliament.

The Wise Response submission on the Zero Carbon Bill is available at: https://bit.ly/2umfRhu.

Submissions on the Zero Carbon Bill can be made from the website: www.mfe.govt.nz/have-your-say-zero-carbon.