Calvert called upon to Act 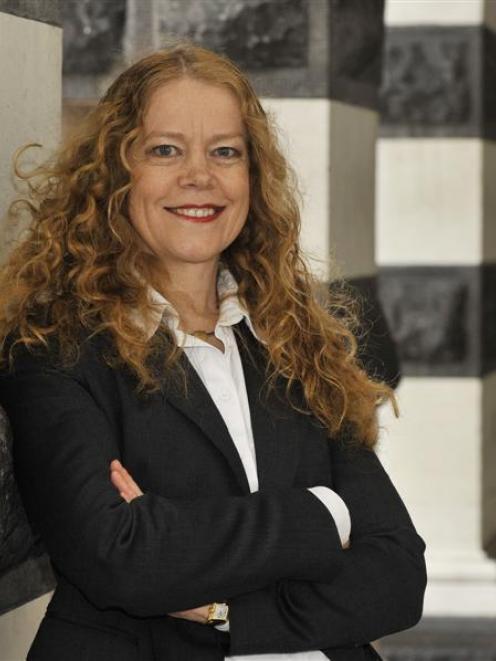 Hilary Calvert outside the Dunedin Railway Station this week, following the announcement she is to be an Act list MP. Photo by Gerard O'Brien.
The seat in Parliament left vacant this week by the resignation of Act New Zealand MP David Garrett will be filled by Dunedin Act list MP Hilary Calvert. Ms Calvert is a mother of three, a qualified but non-practising lawyer and the landlord of, among other things, one of Dunedin's massage parlours. She thinks, but is not certain, that she stood for Parliament for the first time in 2002, she believes she has no criminal convictions but will be checking with police just to be sure and she owns quite a chunk of Oturehua. Mark Price spoke to her during the week.

Q What was your first involvement in politics?

A I was on the executive at the [University of Otago] students' association way back at university. So I guess I have always had an interest.

Q Have you been a member of any political party other than Act?

A I'm not sure. I might well have been a member of both Labour and National in an earlier formative stage of my life. They have records. They could tell you.

Q When did you first stand for Parliament?

Q Where did your lean to the right come from?

A Well it's sort of probably from coming from a family with my father in particular running his own business. Lawyers are self-employed people. My mother was firmly on the other side of the camp. I suppose the strongest feeling I have politically is the more the Government comes and takes over your life, the more you just give up. Like the more your parents do for you the less you do for yourself. It's a version of that. If your mother keeps making your bed every morning you'll keep leaving it.

Q Someone described you as perhaps being the black sheep of your family by being a right-leaning politician but it only applies to your mother, does it?

A We used to laugh sometimes. In the last 10 years or so we would go up to the polling booth, five of us . . . and we'd all be members of the family and we would all be voting different ways... So, we're all shades of sheep in that sense.

Q How did you get on the Act list?

A Back in the day, [an Act party member] came to our door and said: 'What do you think about Act?' and that was the first I had heard of it. And I thought that makes a certain amount of sense. So that's how I got involved.

Q In dollar terms, how much do you think you have spent personally on getting into Parliament?

A I've got no idea. If you campaign in Dunedin North you are campaigning against Pete Hodgson. And I mean, quite frankly, it's not going to happen for you. So, any money the party spends in Dunedin North is money spent wanting the Act Party vote, not the seat... I'm not a person who naturally just puts my hand in my pocket and says I'll give you a whole lot of money, why don't you choose me? In fact, I'm essentially Scottish. It's sort of like people who are Maori who think of themselves as Maori, if they're that way inclined. Although I'm a variety of different things in my background the one that bubbles to the surface from time to time that I notice is the eighth or sixteenth part of me that's Scottish.

Q And how does that manifest itself?

A I don't think people should grab other people's money like the Government does and then not spend it properly. Every dollar you have stolen is from the people. I mean, it's our money. The Government doesn't have any. And it being our money and that they are looking after it, they better look after it properly and spend it wisely and get the best possible deal they can get for our dollars.

Q Any convictions you would like to declare now?

A Yes, that's what I think too. I'm just very wary with all this crap that's going on at the moment. Friends have been sending me things saying I remember when you didn't wear your gloves and your beret at school... You would expect me to remember and I'm not trying to be coy. I'm just not wanting to say there's nothing there in case I've just had sort of a mental block or something and then you come back and say: 'You told me there was nothing'.

Q Any misbehaviour, non-criminal, that might come back to bite you?

A I don't think so. I'm sort of a really, apart from the fact they wouldn't choose me I think, I could be chosen to be a judge. I can't think of anything. My general background rule of behaviour, apart from all sorts of other moral things, is: Would you be embarrassed if this turned up on the front page of the paper? Your paper in fact.

A I'm not related to Taito Phillip Field for example. Certainly there's nothing that I would think was at all relevant... I'm not saying there aren't dark-coloured sheep around next to me family-wise but nothing I would think was relevant in this sort of context.

Q You gained 1.8% of the Dunedin North vote at the last election and here you are in Parliament. Your comment?

A You are lucky to gain any of the Dunedin North vote against Labour but I don't know why. Dunedin is so Labour that if for instance somebody had offered you, as a Labour Party person, a Dunedin North or Dunedin South seat, you would be contacting parliamentary services and talking about allowances and things because quite clearly you would be in. You don't need to even electioneer really. There are a variety of reasons for that but I think 1.8% in Dunedin North is a jolly good result.

Q According to The New Zealand Herald you "unreservedly" support Rodney Hide. Why?

Q Has your support wavered at any point - the taxpayer-funded holiday for instance, the handling of the Garrett business?

A It's a small party and there are lots of things to be handling here and there. I think these things aren't sort of illegal or whatever. They are the sort of things that when you wake up in the morning you'd think that wasn't a very smart choice to make. But you are making choices all the time. And Rodney himself said that the choice he'd made about having the taxpayer fund his girlfriend-partner overseas was a bad one and the wrong one.

Q Is your support for the man or for the only Act member with an electorate seat?

A Probably both. I don't think I'd want to chose one or the other. Clearly the Epsom seat is crucial to us particularly at this stage and I would support Rodney in that and as leader. But I don't think it's an either/or.

Q Could you ever contemplate supporting Heather Roy?

A It's sort of one of those questions like y'know if your wife left you do you think you'd ask for half? Who's to say? She hasn't left.

Q How much of a commitment on your part is it to go to Wellington facing the prospect that Act might not be there after the next election?

A There's a possibility we could all be dead, isn't there? It's surprising that earthquake didn't get some people in Christchurch, wasn't it? Things happen. It's very important we do get a party like Act in Parliament.

Q What do you believe Act's core business is currently?

A The core business at the moment is the confidence and supply agreement and it's the values of equal opportunity, competitive enterprise, limited government, strong families, caring communities. We're for freedom and personal responsibility.

Q How far do you think the welfare state should be rolled back?

A It's partly a matter of perception... We've ended up recently with more and more feeling that people are beneficiaries - like everybody who's got children who can get Working for Families. We've created all of them as another class of beneficiary who go and get a little handout from the Government. So you can end up with most of the population sitting round waiting for the Government to give them some of their own money back. Which is bizarre. It would be much better if we all had less taken away from us and the money that was taken away from us was for two things: one, things that can only be done jointly ... and, two, you are helping people who cannot provide for themselves. So, the closer we get to that model the happier we are.

Q How can you be helpful to the Act party?

A As a lawyer, legal training is very useful when you are in Parliament because of the legislative things that are going on... So having lawyers look over documents, as much as we don't like lawyers on the whole, is quite a useful thing.

Q The only family gossip that's come my way is that the Calvert family has bought up most of Oturehua.

A I think what we have at Oturehua is the manse and the schoolhouse ... the church and farmland. So, we've just sort of ended up with them. It's not so much your Mayfair-Park Lane sort of thing. It's more your other end of the Monopoly board. We like to feel we are good community people at Oturehua.

Q You tried to stop the stadium?

A Yes. I'm very against the use of public money for such a project. I remain very concerned about it and the idea of just saying: 'Oh well you might as well get in behind it because it's working'. It's still in the position where stopping it now would be a lot cheaper than keeping on building it. And what we've now got is a position where the council has sucked dry all the council-owned companies and things that were providing money to the council to make the rates cheaper and work better. And so now we're sort of playing on loaded bases, which is a pity... We've just borrowed a whole lot of extra money and we're very, I wouldn't say bankrupt, but it's a real pity to have got ourselves in that position.

Q According to a radio report, you have a pecuniary interest in a licensed massage parlour.

A I've got a variety of interests in real estate round town and the tenants... include a finance company, bank and lawyers and a variety of places, but they also include a massage parlour. So I think some people might be more concerned that as a landlord I've got an interest in housing a finance company. That might be a worse thing to do, I don't know. But that's where that came from. I'm not financially interested in the massage parlour. I'm a landowner.