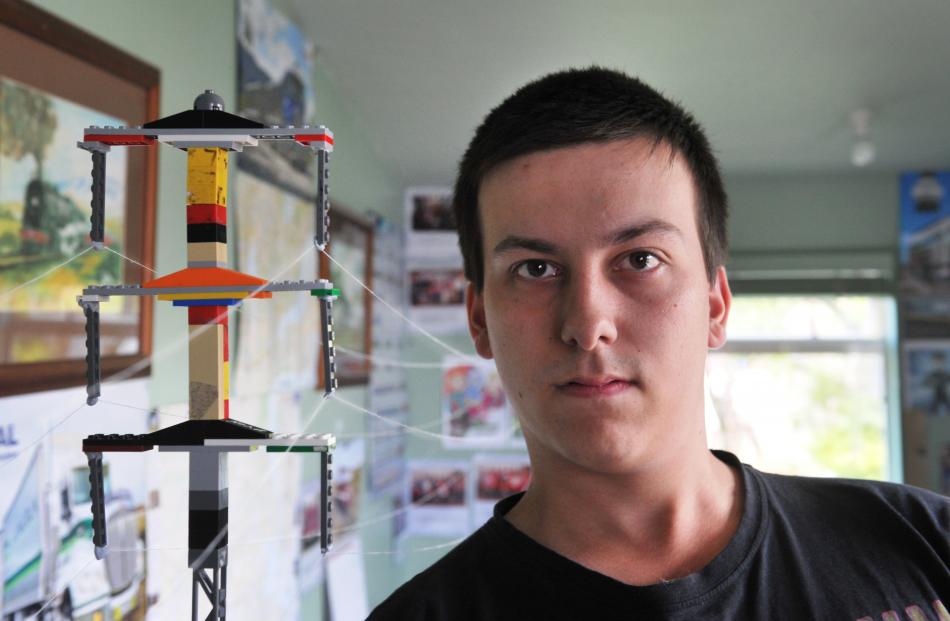 After a visit to Central Otago, Jordan drew on his photographic memory and attention to detail to recreate scale models of power pylons made of Lego. Photo: Christine O'Connor. 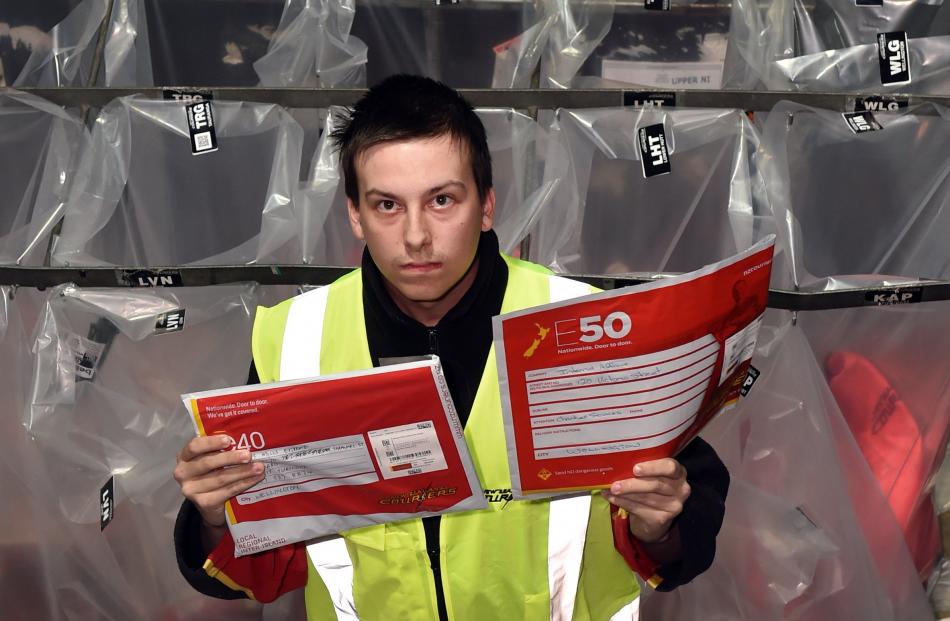 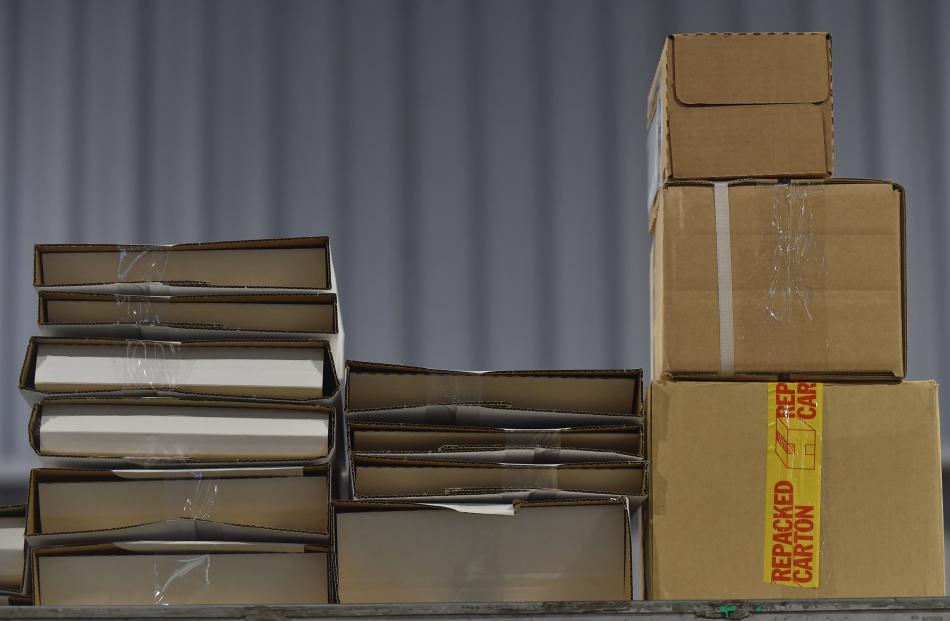 Orderliness and predictability can be strong drivers for people with autism.

Once shunned and undervalued, people with autism are gaining respect and independence as sought-after employees, writes Bruce Munro.

The young man is wearing jeans, a Led Zeppelin T-shirt and an intense gaze.

He sits on a couch in the lounge of his family’s South Dunedin home and tries to make sense of the questions.

Where did you go to high school? And where before that? The responses are fired back; quick, precise, complete.

You’ve been working at New Zealand Couriers. What were you doing there?

What does your work involve?

Change of tack. What did you do there, Jordan?

Another try. How did you do it?

"I put it in the right destinations."

Did you have to learn the names of different places in New Zealand to do that?

Jordan’s mum, Raewyn, jumps in with a response.

"There’s a good story about that," Mrs Elliott says.

"When Jordan started high school, in the very first social studies class they were given a map of New Zealand with about six blank place names and they had to look up an atlas and write the place names on the map.

"This one doesn’t need that. He’s got the map in his head," she says nodding towards her 20-year-old son.

"He put the six names in place without using an atlas, added another four or five for good measure and drew the main trunk lines on as well, all within 10 minutes flat.

"We’re pretty sure he’s got a photographic memory."

If geeks are inheriting the earth, autistics are emerging as their kings and queens.

The once-bullied geek is now the star of television and film — think Napoleon Dynamite and The Big Bang Theory. But from within their ranks, it is those with autism spectrum disorder (ASD) who are increasingly sought-after as prized employees.

People with autism have trouble making sense of the world, but they often have qualities and abilities that are highly attractive to employers. So, around the globe, organisations and businesses are falling over themselves to get a slice of the autism employment market.

Three years ago, Los Angeles company MindSpark began deliberately employing analysts on the autism spectrum to test software for companies in the United States. Last year, in August, the company began its global expansion. Not that the globe is MindSpark’s oyster alone to shuck. Not by a long shot. Across the Atlantic, Denmark-based Specialisterne matches autistics with jobs as software testers and programmers.

It is a trend that has reached this corner of the world. And it is not only the IT sector that is recognising the benefits. Dane Dougan, who is chief executive of Autism New Zealand, says that during the past 18 months in the Auckland region alone his organisation has placed 17 people with ASD in jobs ranging from fashion retailing and building to IT and gardening.

With an estimated 65,000 New Zealanders living with autism, and international studies suggesting only 15% of autistic adults are in full-time employment, it is no surprise this new-found popularity is being heartily embraced by those on the spectrum and their families.

For three hours, Jordan would sort dozens of courier packs, meticulously matching addresses to two dozen geographically-labelled bags so they could be whisked off to their intended destination.

"It’s that methodical, predictable thing. There are no surprises," Mrs Elliott says.

"One thing that autistics are really rigid about is that the right things have to be in the right place. So, that job is perfect for him, because that is what is required."

Autism is a sliding scale of life-long developmental disability. The spectrum ranges from high functioning autistics, mostly with above average academic intelligence, to those needing 24-hour care. All autistics, however, have a triad of impairments affecting social interaction, social communication and imagination. Employers are keen to avail themselves of the autistic person’s special skills or interests, their ability to do repetitive tasks without faltering and their loyalty.

"If that special interest has something to do with the place of work, that person will probably end up being the best at that particular area," Mr Dougan, of Wellington, says.

But the autism package can also include difficulties initiating and maintaining social relationships, fixating on objects or behaviours and being either hyper-sensitive to or unaware of sounds, smells and other sensations.

At present, on most mornings, with his digital camera in hand — "It’s a Canon SX410IS. I got it for Christmas, in 2015" —  he catches the bus along the western edge of Otago Harbour. Getting off at Sawyers Bay, Jordan watches and photographs any trains passing through. He then walks the remaining 2km to Port Chalmers and up to Scott’s Memorial on Blueskin Rd — a prime spot for taking snaps of visiting cruise ships.

Jordan is extremely sensitive to noise. He used to walk the high school halls with his hands over his ears. Then his Dad, Pete, gave him some industrial ear plugs to wear.

"He popped them in and, voila, no more hands over ears," Mrs Elliott says.

"That was a breakthrough, an absolute breakthrough. Immediately, he just looked like everyone else."

He still is no fan of sudden, loud sounds. Out the window, Jordan spies dark clouds and a few spots of rain. He begins to pace, concerned that it could signal an imminent storm. His mum assures him thunder is unlikely. He re-takes his seat.

"Yes, put that on nice and loud and you won’t hear thunder," Mrs Elliott says.

"Thunderstruck, from The Razor’s Edge," Jordan continues on his new tangent.

Jordan has several friendly acquaintances from school days, most of them young women, whom he still greets in the street. But no firm friends.

"That’s one down side. He doesn’t have a buddy," his mum says.

"It’s not surprising, because they are so happy in their own company they just don’t worry about it. It bothers us more, that when he goes out in the big wide world he doesn’t have someone to have some fun with who has the same interests. It would be quite nice if he could actually share it with someone else. It would be good for his well-being, the socialising.

"We would love it. Him, I don’t think he cares one way or the other."

What Jordan does care about is predictability. Every Thursday, after work, it was off to the same fast food outlet for the same meal.

"You can’t spring things on him, even good things," Mrs Elliot says.

"A few years ago, a steam train visited at the Railway Station. We didn’t tell Jordan, we just took him down there. One look at the steam train and, no, we had to take him home.

"About an hour later he decided, yes, he would like to do it."

With that in mind, in January, when after six months his work at the courier depot was coming to a end, Jordan’s parents broke the news to him a couple of weeks ahead of time.

He was upset. But by the end of the fortnight, he had grown accustomed to the idea.

That anxiety is not felt solely by the person with autism. Some employers are also fearful, of giving work to those on the spectrum.

Paul Arnott works for CCS Disability Action Otago. He is a vocational and transition co-ordinator, based in Dunedin. During Jordan’s last year at high school, Mr Arnott worked with him, his teachers, his family and the prospective employer, to prepare for and help Jordan take the next step.

It is important to work with the employer, Mr Arnott says.

Often, bosses and managers will be concerned about the health and safety implications of employing a person with a disability.

"There’s still very much a focus at times on what people can’t do rather than what they can do; or, rather, what people think they can’t do."

But a growing number of employers are getting their head around how to accommodate the needs of people with autism and tap in to their potential. Employers such as Craig Cochrane, who manages the Dunedin branch of New Zealand Couriers. He has no doubt he will be employing Jordan again as soon as a position comes up.

"From my perspective, it went very well," Mr Cochrane says.

"And to be perfectly honest, the controls we had to put in place for Jordan’s disability weren’t very onerous.

"We kept a bit of an eye on him, but apart from that he got dealt with like any other staff member."

Jordan’s autism is a strength in a couple of ways.

Sorting courier packs is "not rocket science", but it does require attention to detail, Mr Cochrane says.

"Because if we send it to the wrong city, I might end up having to fly it back the next day. So there is potential for a mistake to be quite costly to the branch."

Jordan’s capacity for relentless focus meant he was "was on-point the whole time".

And whenever there was a lull between courier van deliveries, Jordan would ask for another task.

"He would always be sweeping or cleaning ... I would have to tell him to take a break."

Mrs Elliot can see the difference employment has made to her son — the growing independence and the pride he takes in his work.

"It makes such a difference when you’ve got an employer who is open to the idea of employing someone with a disability ... That’s the biggest thing you could ask, for people just to give someone a go."

The tide seems to be turning on that one, in favour of people with autism.

For the past 18 months, Autism New Zealand has had a part-time facilitator, funded by the Ministry of Social Development, whose job it has been to match job-seekers with employers keen to take on someone with autism.

"We are seeing some really strong interest in employing people with autism," Mr Dougan says.

"We are starting to get more people coming through the door than we can handle."

He would like to see the scheme rolled out nationwide.

Employers, agencies and parents could not be happier with the new, positive direction.

One final check, to make sure it is also benefitting those with autism.

Do you enjoy doing your work, Jordan?

What do you enjoy about it?

"Getting things to the right destination."