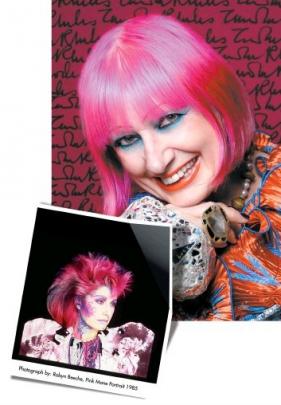 Zandra Rhodes today and in a 1985 portrait by Robyn Beeche. 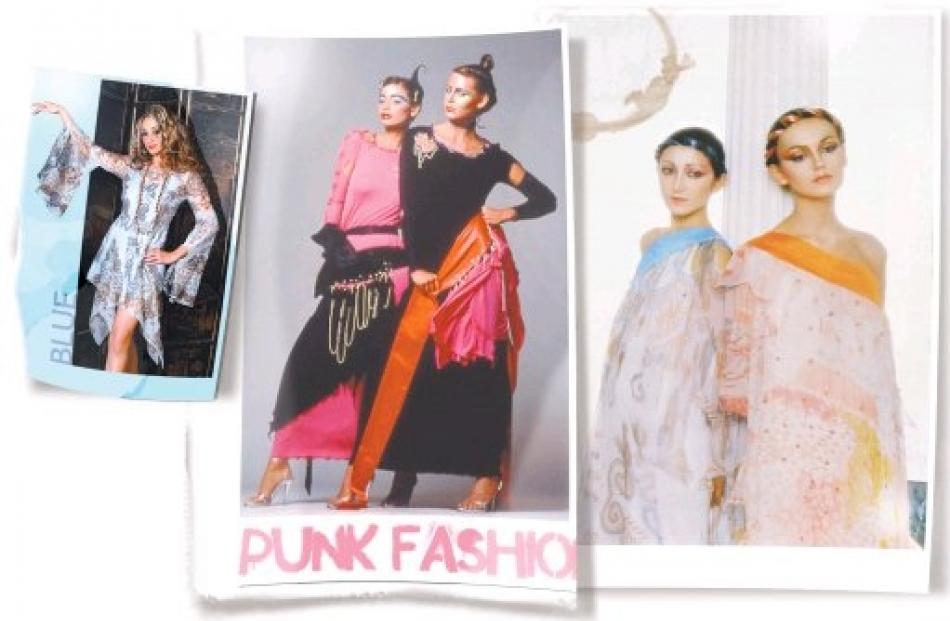 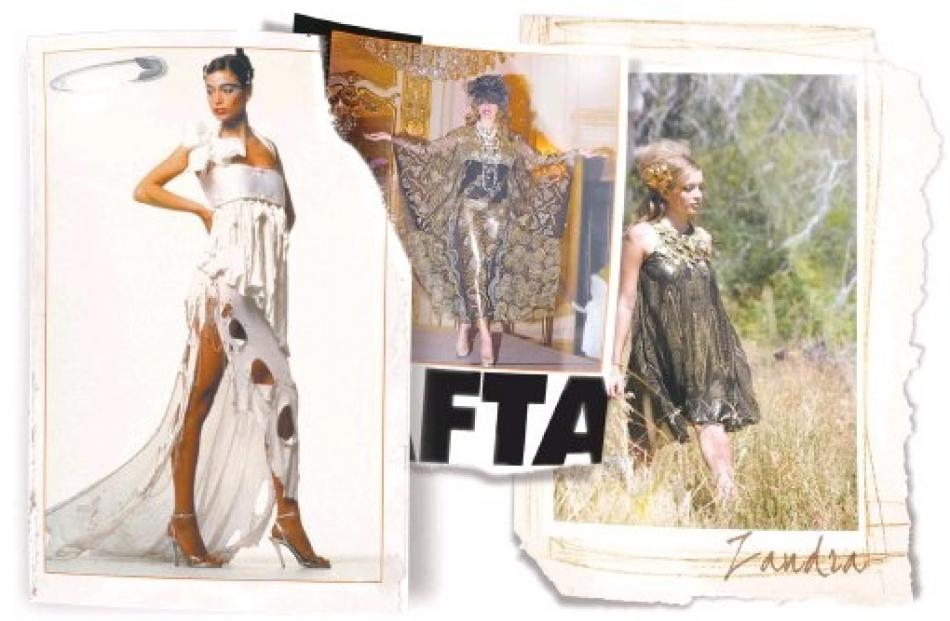 Zandra Rhodes collection dresses, including (left) a punk wedding dress from 1977 and (centre) a kaftan.

One of Britain's most significant fashion designers, Zandra Rhodes, arrives on Monday in Dunedin where she is a guest of iD Dunedin Fashion Week. Jude Hathaway caught up with her last week.

All the colour of Zandra Rhodes (CBE) comes down the phoneline from London, where the celebrated British fashion designer is attending London Fashion Week.

There is a genuine enthusiasm also, making it even harder to believe that this unconventional lady with the pink coiffure - who helped put London at the forefront of international fashion in the 1970s - is in her 70th year and has been an unmistakable fixture of the fashion industry for more than half a century.

This week, she brings her remarkable knowledge of textile and fashion design to the judging panel of the iD Dunedin International Emerging Designer Awards.

She is also bringing gorgeous garments from her collections to show the crowds at the Dunedin Railway Station platform at the 11th iD fashion shows on Friday and Saturday nights.

"I'm really looking forward to it, it's going to be something else," she says.

"I've never shown on a railway station platform before."

Patrons are in for a treat.

"I'll open with a couple of my historical designs.

"There will be the one-sided dress, like the one I designed for Jackie Kennedy.

"I'm also going to show some of my ultimate favourites such as the multi-chiffon kaftans.

"I hope that, all up, the collection will be a real Zandra Rhodes taster."

The collection will also be a reflection of the woman who has from early in her career designed for royalty, rock stars and the rich and famous.

As well as the late Diana, Princess of Wales and Jackie Onassis, her clientele has included Elizabeth Taylor and the late Freddie Mercury.

A Zandra Rhodes garment has been described as "the ultimate dress-up dress".

Helen Mirren, star of Calendar Girls, The Madness of King George, and The Queen wore a Zandra Rhodes when she received her Bafta award.

Jessica Parker has been adorned in Zandra Rhodes in Sex In The City.

Supermodel Naomi Campbell is among those who collect her clothes and last month young actress Nicole Richie was photographed for Hello magazine looking glam in a chiffon vintage Zandra Rhodes dress with handkerchief hemline.

These days Rhodes divides her time between her homes in London and San Diego, working with a clientele as diverse as ever.

"In the United States I go to Palm Beach for my work.

"I also have clients in San Diego and many in the UK," she says.

The garments they buy have been described as "clear, creative statements, dramatic but graceful, bold but feminine that have a timeless quality that make them, unmistakably, a Rhodes creation".

Among them there have been the extroverted standouts.

The collection earned her, at the time, the title "The Princess of Punk".

Shortly after came the beautiful painted chiffon dresses of 1979, which feature in the London Design Museum's book Fifty Dresses That Changed the World, published last year.

It says: "She and her clothes brought a flamboyant, painterly energy to London's fashion scene".

She is in good company.

However, the two designers she most admires are not in the line-up.

"I love the drapes of Lanvin's Alber Elbaz and he's so open and fab.

"And I like Jean Paul Gautier because he is continuously innovative."

In Dunedin she will use the bold and beautiful jewellery of notable English sculptor Andrew Logan to complement a number of her designs.

He is accompanying her to Dunedin.

Logan's sculpture of Zandra Rhodes was unveiled in the National Portrait Gallery by the Queen in 1994.

Born in Kent in 1940, Rhodes' introduction to the world of fashion was through her mother, who was a fitter in a Paris fashion house and a teacher at Medway College of Art.

Rhodes studied first at Medway and then at the Royal College of Art, in London.

Her major area of study was textile design.

With her early textile designs considered too outrageous by the traditional British manufacturers, she decided to make dresses from her own fabrics and pioneered the use of printed textiles as an intrinsic part of the garments she created.

In 1967, she opened her first shop, the Fulham Road Clothes Shop, in London, with Sylvia Ayton.

Two years later she set up on her own and took her collection to New York, where it was featured in American Vogue.

She subsequently started selling to women's clothing boutique Henri Bendel, in New York, and back in the UK was given her own area in upmarket department store Fortnum and Mason.

In 1972, Rhodes was named Britain's designer of the year and in 1974 was made royal designer for industry.

The next year she founded her own shop off Bond St in London, from which the rich, famous and fashionable bought and wore her clothes.

Her career began to soar and has continued to do so since, each year and each decade marked by new collections, new projects and highlights.

The regard in which she is held within the fashion and textile industries is illustrated in her nine honorary doctorates.

She was made a Commander of the British Empire (CBE) in 1997.

She continues to colour her hair bright pink, which has been part of her signature from the early days.

Looking back she finds it difficult to name a favourite time.

"I think every decade has been exciting for me because each has presented its different challenges.

"I don't think that I can favour one over another."

"If you look back and say 'this time was the best' it could almost put you in a time warp, which is probably not such a good thing."

She has lived through changes in the fashion business, some good - some not so good.

"These days it is often not so much about 'oh what an amazing design' as that a footballer's wife or minor starlet has been photographed wearing your garment."

She also pointed out that not so long ago, fashion garments were featured in magazines on their merit.

"It was not about having to purchase a page of advertising."

In recent years the Fashion and Textile Museum, in London, which she founded in 2003 and of which she is patron, has become a large part of her life.

The works of Foale and Tuffin, two influential designers at the heart of the cultural explosion in the 1960s, have recently featured in an exhibition.

Opening soon is another on fabric and furnishing company Sanderson ("Very Sanderson - 150 years of English decoration") focusing on some of the beautiful wallpapers and textiles the company has produced through the years.

It is a field dear to Rhodes' heart.

"This world was my life before I started making dresses," she says.

The intrepid Rhodes has also moved into the design of sets and costumes for operas, which highlight her spectacular use of colour.

The diversification started in 2001 with costumes for the San Diego Opera's The Magic Flute.

She was then asked to design both sets and costumes for Bizet's The Pearl Fishers in 2004.

More recently she worked with Houston Grand Opera on the Egyptian-inspired designs for Verdi's Aida, which opened at the English National Opera in 2007 and encored in 2008.

"It's another world for me, just as working on homeware ranges for Marks and Spencer and a line for the outdoor camping brand Millet - including folding chairs, turquoise printed wellies and anoraks - is yet another exciting side."

It's obvious she is as busy as she ever was.

"I come from a workaholic family - my mother was always busy sewing clothes - but it really comes down to the sheer enjoyment of what I do.

"I just wouldn't not want to do it.

" On the other hand," she adds with a laugh, "it would be nice to know that I didn't have to earn money."

Rhodes has been to New Zealand twice before.

She was in Nelson to judge the World of Wearable Arts awards in 2000, then visited Auckland with her partner Salah Hassanein, the former president of Warner Bros Cinemas and Variety Lifeline, to attend a charity event honouring Sir Edmund Hillary.

"While in Auckland I was able to visit a number of the museums, which I enjoyed, and I'm hoping to be able to get some time off while I'm in Dunedin to have a look around," she says.

A lover of fairy stories, she is a fan of the Lord Of The Rings film trilogy.

"I've also watched the documentary about the making of the films in the many locations around New Zealand, which has given me a good feel for your beautiful part of the world," she says.

It's Dunedin's gain that on this visit she is bringing with her in her luggage a tangible glimpse of her own world - that extraordinary world of Zandra Rhodes.

• Catch it all
Some seats are still available for the iD Dunedin Fashion Show on Friday and Saturday nights, March 12 and 13.

Tickets can be purchased from Ticket Direct.