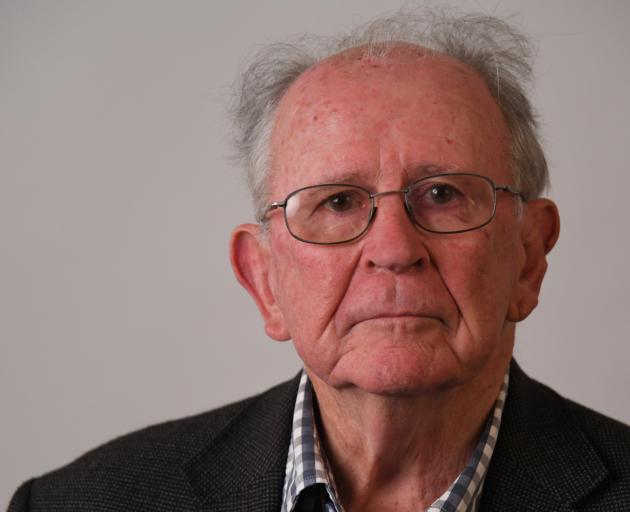 Vincent O'Sullivan: "Pakeha whakapapa goes as far back as any English or Welsh tradition of our ancestors". Photo: Craig Baxter

Vincent O'Sullivan's new novel puts New Zealand back on the map, if not at the centre of the action, writes Tom McKinlay.

In his award-winning novel Let The River Stand, Vincent O'Sullivan has a teacher, Mr Adams, make the case for a more inclusive accounting of the Pakeha experience.

"Heritage," the teacher exhorts his class, showing them a painting of Agincourt. "You're part of that, ... all that's part of you," he instructs the less than receptive collection of adolescents.

And not just the great victories against France: " ... when the class discussed Anzac Day earlier in the year, Mr Adams had needed to turn away and look out the window".

The lesson being that the thinly ameliorated parts of the past are us too; painfully so.

Dunedin-based O'Sullivan, one of the country's most celebrated writers - novelist, poet, short story writer, editor, playwright, scholar - takes up the case for a deeper understanding of what it means to be Pakeha in his latest novel, All This by Chance, this time reconnecting New Zealand with the 21st century's "defining event for atrocity", the Holocaust.

As O'Sullivan says on the back cover: "If we don't have the past in mind, it is merely history.

"If we do, it is still part of the present."

The character around whom the novel unfolds, Stephen, sails for post-war England to escape a damaged and claustrophobic New Zealand, where he meets Eva, a young Jewish woman who was transported out of Nazi Germany before the fighting began in earnest. While she grew up English and escaped the concentration camp tattooist, history nevertheless insists on leaving its mark. The couple return to New Zealand, to family life, so for them, and by extension New Zealand, the Holocaust becomes part of the Pakeha story too. For them, inescapably so.

This is O'Sullivan's point.

"Sometimes I get irritated with the notion that some New Zealanders have, and some New Zealand writers and teachers even have, that somehow the Pakeha story in New Zealand just begins when your parents or grandparents, or something like that, arrived here," O'Sullivan explains.

"Whereas in fact, Pakeha whakapapa goes as far back as any English or Welsh tradition of our ancestors, you know."

It is absurd to think of us as some sort of newly inexperienced people. Families, he says, are shaped by events in the past.

"Say, someone had a great-grandfather killed in the First World War. That absolutely shaped their experience of family for another couple of generations. So I just think it is a much more interesting and intricate world in our Pakeha past than we would sometimes give credit to."

O'Sullivan cites the example of the late Rolf Panny, who wrote the memoir Between Hitler & A Hard Place, about his years growing up in Hamburg as the Nazis came to power. Panny, who was later head of the German department at Massey University, fought through the war on his birth country's side in Siberia and on the Russian front. So that too became part of the New Zealand story when he emigrated.

O'Sullivan is back in the 1940s with All This by Chance, as he was for Let the River Stand, a period that interests him, but also drawn to the subject of the Holocaust as what he calls the defining event for atrocity in his lifetime.

As a small child growing up in the Auckland suburb of Westmere during the war years, O'Sullivan can remember being aware of a Jewish family further down the street. While his family was only on nodding terms, the young O'Sullivan had the sense they were different, "implicated in a story that was different from the rest of ours".

As the horror of what had happened in Europe became clear, he was fascinated, "in the way that children are by being close to something that's utterly different, and yet they can't get a real grasp of it".

The writer is quick, though, to insist All This by Chance is not a "Holocaust novel". He does not believe it would have been legitimate for him to attempt that.

"I would never in 100 years describe this as a Holocaust bit of fiction. I don't have any right to do that. It is an area that, I don't believe in censorship of any area, but at the same time, I think that if you are a writer you have to be very aware that there are certain areas of experience you can't claim to know anything about personally and you have to be very careful about how you are approaching this."

He was reassured by a friend who works at the Holocaust Centre of New Zealand, in Wellington, that his approach in All This by Chance was legitimate.

And, in the novel, O'Sullivan gives a Gentile the job of telling the concentration camp story, not that he spends a lot of time behind the barbed wire. The war years and their immediate aftermath are just a part of the picture, the novel going on to tell the stories of Stephen and Eva's children and grandchildren, as they spread out around the globe in typical Kiwi fashion. Though they carry their family's history with them, the stories are by no means all grim. There is young love and adventure.

And the Jewish people in the novel are certainly not all victims. Stephen's first encounters, on disembarking in London, are with a couple of older Jewish men who extend the hand of friendship and help him on his way. They are warm and welcoming characters, and O'Sullivan chuckles as he remembers meeting their equivalents around Finchley Rd when he himself was in London.

So far so male; Vincent, Stephen, and the Jews of Finchley Rd.

But as the action cranks up, it's the women of the story who take the leading roles.

"It has been my experience, as a New Zealander anyway, that often in families, public life, elsewhere, it is women who get on with things, and men are good at commentary," O'Sullivan says with conviction and a chuckle.

It also makes sense to follow the female line, he explains, as the story really begins with Eva.

In the years before we meet her, she's been whisked off across borders to safety, another important theme in the book. 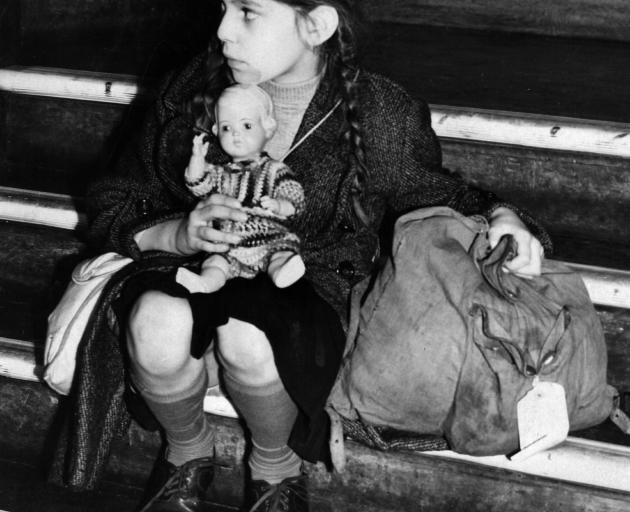 Tired and alone, an 8-year-old "kindertransport" refugee from Germany, arrives in England in 1938. Photo: Getty Images
The action in Germany is set in Breslau, which became Wroclaw after the war and part of Poland as borders shifted following the peace.

"Everyone is crossing borders or wanting to cross borders of some kind," O'Sullivan says of his characters. "This can be something that fulfills but can also be something that diminishes, and this is just on a small personal scale what happens to history all the time."

Again, O'Sullivan does not see this is an issue primarily for people elsewhere, in countries defined by cartographers' rulers.

"I think this defines us as a people very much that we are a country without borders," he says of New Zealand.

"So this accounts to some extent I think for both our strengths but also I think for some of our failings. I think it can perhaps be a little harder for us at times to quite appreciate the dreadfulness of losing a homeland or being obliged to cross a border or not to be allowed to return.

"All these things, it is not vicarious living, because we take it seriously, but a lot of the important things in our own lives nevertheless we only experience mainly through television, through news. That's not at all an anti-New Zealand thing to say, it just happens to be a fact and it can also make us think that we are rather more important at times than we are.

"There was a book years ago by historians called Distance Looks Our Way, well I don't know if distance does bother to look our way very much. But we are always looking their way."

While O'Sullivan's characters play the cards they've been dealt, just off screen there are recurring glimpses of a kinder world, as embodied by the promises of left politics.

O'Sullivan's Finchley Rd Jews are living through the post-War Labour Government of Atlee and Bevan, a time when optimism could be entertained, despite recent history.

But in the novel, as so often in life, world shaping philosophy remains peripheral as the characters become chiefly concerned with what is immediately in front of them.

"Ideas are always operating according to a different timetable, not always but often, to what we expect and what we strive for," O'Sullivan says. "And in fact, if that wasn't the case we wouldn't have those ideals. Because a political ideal even, is a desire in a way to cross another border, to get to another state.

"I hope it is not a pessimistic book. I was just looking at it the other day, I hadn't looked at it properly for months. Anything like integrity or decency or goodness in people, and so on, has to come from what individuals are doing or not doing and larger claims, historical claims is a bit like talking about the tide: ... you can't force it to ebb or flow as you want to. That is probably the general condition of life, it always goes on at the individual level, making of what they can of a deeply imperfect world.

"That sounds a bit like a preacher, Billy Graham," O'Sullivan says, chuckling at himself again.

O'Sullivan's last book was a collection of poetry, as is his next.

He says the long gaps between his novels is because they take "quite a bit of time".

His previous, Believers to the Bright Coast, was published in 2001.

"It just seemed to me that I hadn't done any prose for a while, since my last book of stories, and I greatly enjoyed doing that.

"And it is such a totally different world also, socially, to that of writing poetry," he adds mischievously. "And that was a welcome relief.

"The fictional form is one that gives you the chance more than any other perhaps to try to talk about how an individual person copes or survives or doesn't survive when they are in a particular situation or faced with historical forces larger than them. But the point is, even when you are faced with something implacable, the machinery of a dictatorship or something, there are still decisions the individual makes, which is entirely their responsibility."

• All This by Chance is out now.