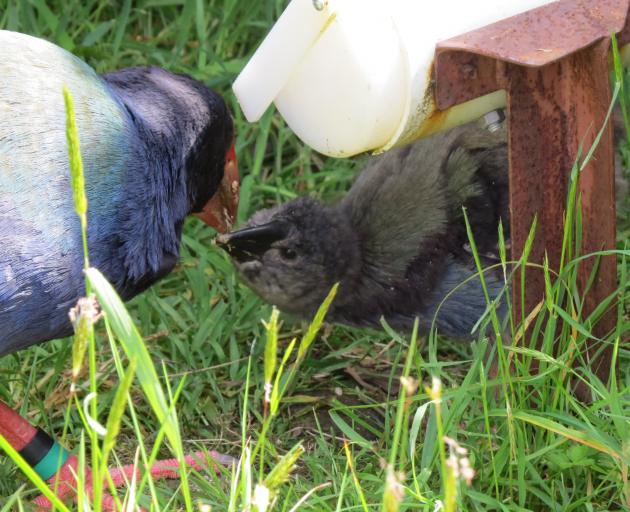 This spring saw staff and volunteers at Orokonui Ecosanctuary awaiting — in hopeful anticipation, but with some fearful apprehension as well — the arrival of two healthy offspring for Orokonui’s young takahe pair, Waimarie and Bennett.

Our much-loved older pair, Paku and Quammen, who had nurtured both their own and several foster chicks, were deemed too old for further parental duties and deserving of a quiet retirement away from the hurly burly of the most visited areas of the ecosanctuary.

While their function at Orokonui had been primarily an advocacy one for Doc’s takahe recovery programme, as they were believed to be infertile, they had surprised everyone by producing a fertile egg and successfully raising that chick.

In so doing they had also shown that Orokonui was a suitable place for takahe breeding. In recent years the takahe recovery programme has been so successful, with numbers increasing by about 10% per year, that suitable safe sites have become a rare resource. 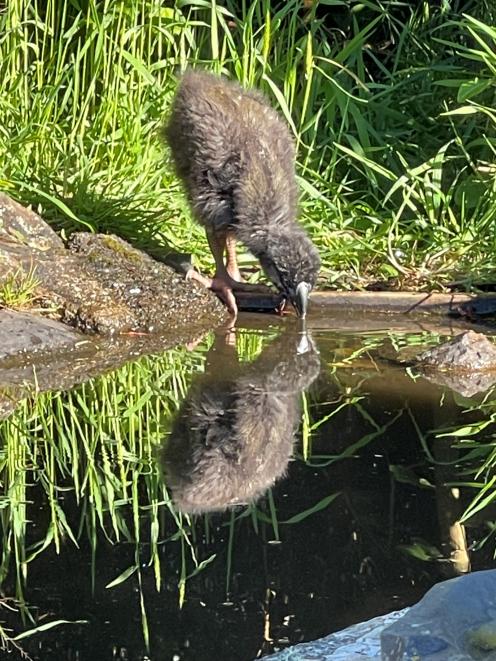 There are now about 450 birds.

The Fiordland homeland in the Murchison mountains reached its capacity carrying numbers of about 200 in 2019, and a second wild population has since been established in the Kahurangi National Park.

And so Waimarie and Bennett, a young fertile pair, were brought to Orokonui in 2020 as a breeding pair, in the hope that they would contribute to the ongoing success of the recovery programme.

But last year the hope of seeing juvenile takahe running around the ecosanctuary by Christmas was dashed. Waimarie and Bennett were unsuccessful in their first nesting attempt.

Although one chick was hatched it had a defect at birth and did not survive. The worry was that perhaps there was a genetic problem, as frequently happens when a population is inbred, despite the care that is taken to match up birds as well as possible genetically. Nothing could be done but wait for the next season, and hope.

September 2021 arrived, and the Orokonui rangers, having observed nesting behaviour, were keeping a close eye on Waimarie and Bennett, but they kept mum about what they saw. Privacy is imperative for a nesting pair. On September 22 they announced that the birds were sitting on two eggs, that both were fertile and near hatching.

As two is the maximum number of chicks takahe can raise, the delight was great. It was still greater when two apparently healthy, fluffy black bundles were seen in the following days.

Takahe sensibly keep their newly hatched offspring well out of sight for some time, but by October 16 they had left the nest. Pictures show the characteristic white tip on the black beak that directs the parents to the appropriate place to deposit food, beak-to-beak feeding being necessary at the start. While grasses are the staple food of adult birds the chicks also need some protein to build their bones, just as in humans. The adults can be seen grubbing in the ground for invertebrates to supply it.

With two chicks to feed the parents are kept very busy. Waimarie and Bennett were clearly assiduous in their duties in those early weeks, as the chicks grew apace. By mid November a cute video on Facebook showed healthy chicks on the run.

These days they can be encountered following their parents about the sanctuary, learning to feed on the succulent base of the tussock tillers, and, of course, learning how to use the feeding station in the visitor area. The pattern of 11am supplementary feeding continues, now for four beaks, not just two. It is fun to watch.

A couple of days ago I was among a group of tiny tots waiting for the family to turn up. They were late. No parents of young offspring would be surprised at that! But at last, Waimarie appeared, followed by a chick, heading straight for the hopper, where she picked out pellets and passed them to the little one. But where were Bennett and the other chick? 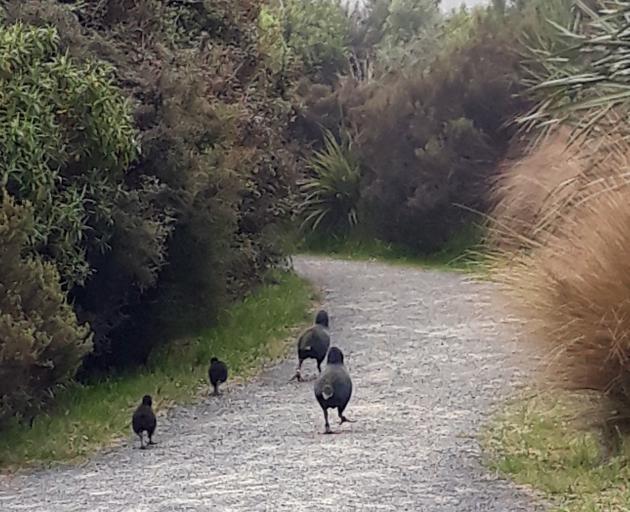 The family exploring the sanctuary. PHOTO: NOELENE GLASS
At last they came out from the tussock patch across the way and started crossing the grass toward us. But seeing children moving around the chick took fright and ran back into the tussocks, while his Dad continued on to the feeding station. A minute later a panicky, distressed cry came from the tussock area. Immediately Bennett dashed out and across to the cry. Now came a loud adult call from Waimarie, sounding like: “Is everything OK over there? What’s the matter with baby?”

Bennett replied: “ It’s OK. He just got a bit lost and frightened alone in the tall grass.” After a couple more concerned exchanges Bennett reappeared with the chick following, and all was well. Such good parents!

The future for the new chicks will depend in part on their gender. A female chick may be allowed to stay at Orokonui for another year to help its parents raise the next brood. A male will probably go to the Burwood Takahe Centre to be matched with an appropriate mate and prepared for release, perhaps to the second wild population in the Kahurangi National Park, where future trampers on the Heaphy track may encounter them.

But with much less effort lucky Dunedin residents and their visitors can meet three generations of this stunning taonga species after a mere 30-minute drive to Orokonui!