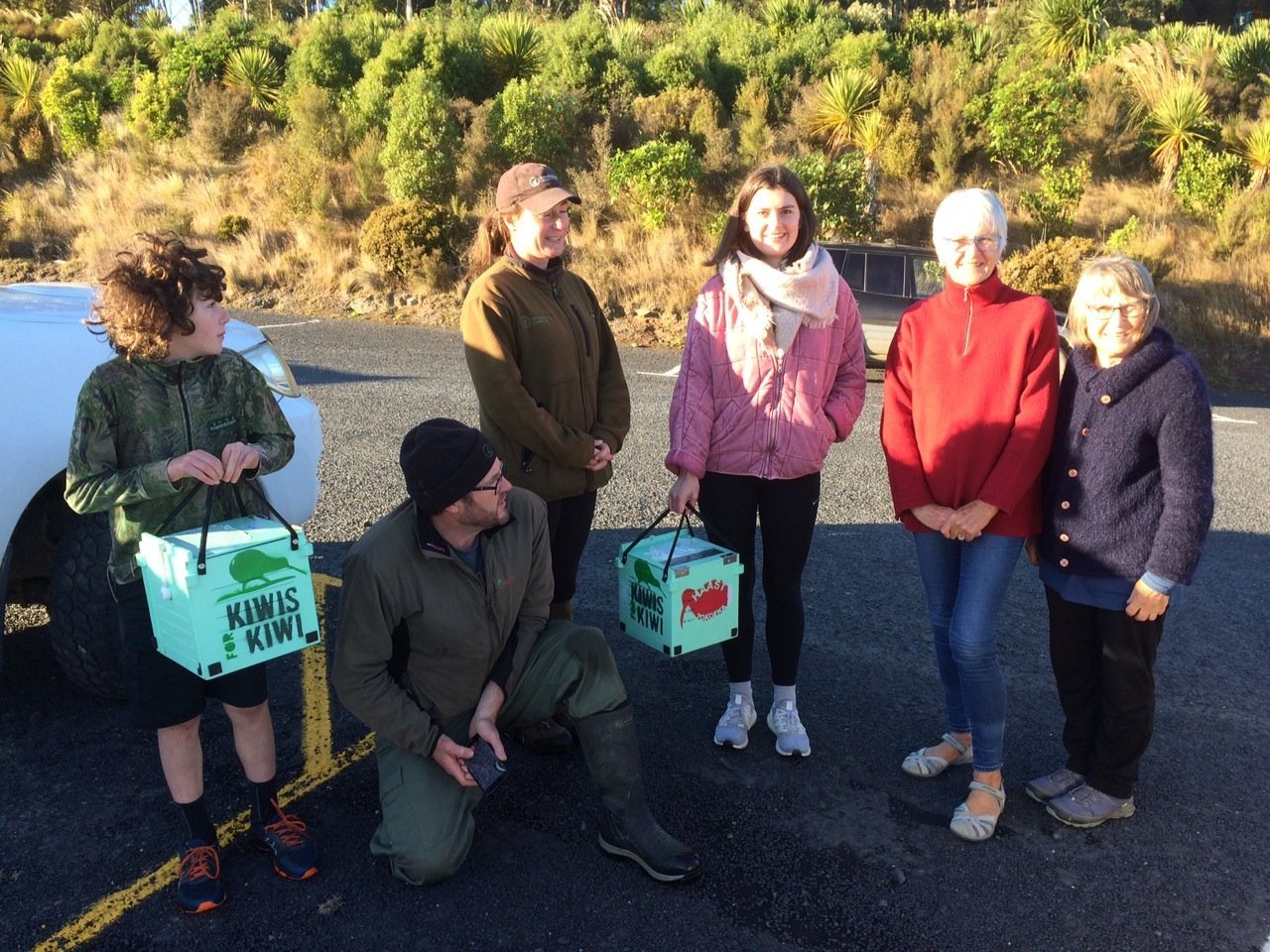 The Orokonui team farewells the chicks leaving its care. PHOTO: SUPPLIED
They say it takes a village to raise a child; raising young kiwi takes a team of dedicated people. Barbara Johnston and Joy Pringle shared the reward of their part in the complicated process, moving a pair safely on from Orokonui’s care.

A most exciting email arrived from Kelly, ranger and kiwi expert at the Orokonui Ecosanctuary in April. She was asking if my fellow volunteer Joy and I would be able to transport two Haast Tokoeka juvenile kiwi to Te Anau and help with their translocation to Centre Island/Tihaka in Lake Te Anau. We had been hoping our turn would come, so we didn’t hesitate to quickly rearrange our lives and say “yes”.

We had both been helping take care of Lochy and Grail in the kiwi creche over the summer and it was now time for them to move on to a predator free island for the winter.

Kelly and her team had been up early to catch the two chicks, so by the time we arrived at the ecosanctuary at 8.30am they were safely tucked into their boxes ready for the trip south. 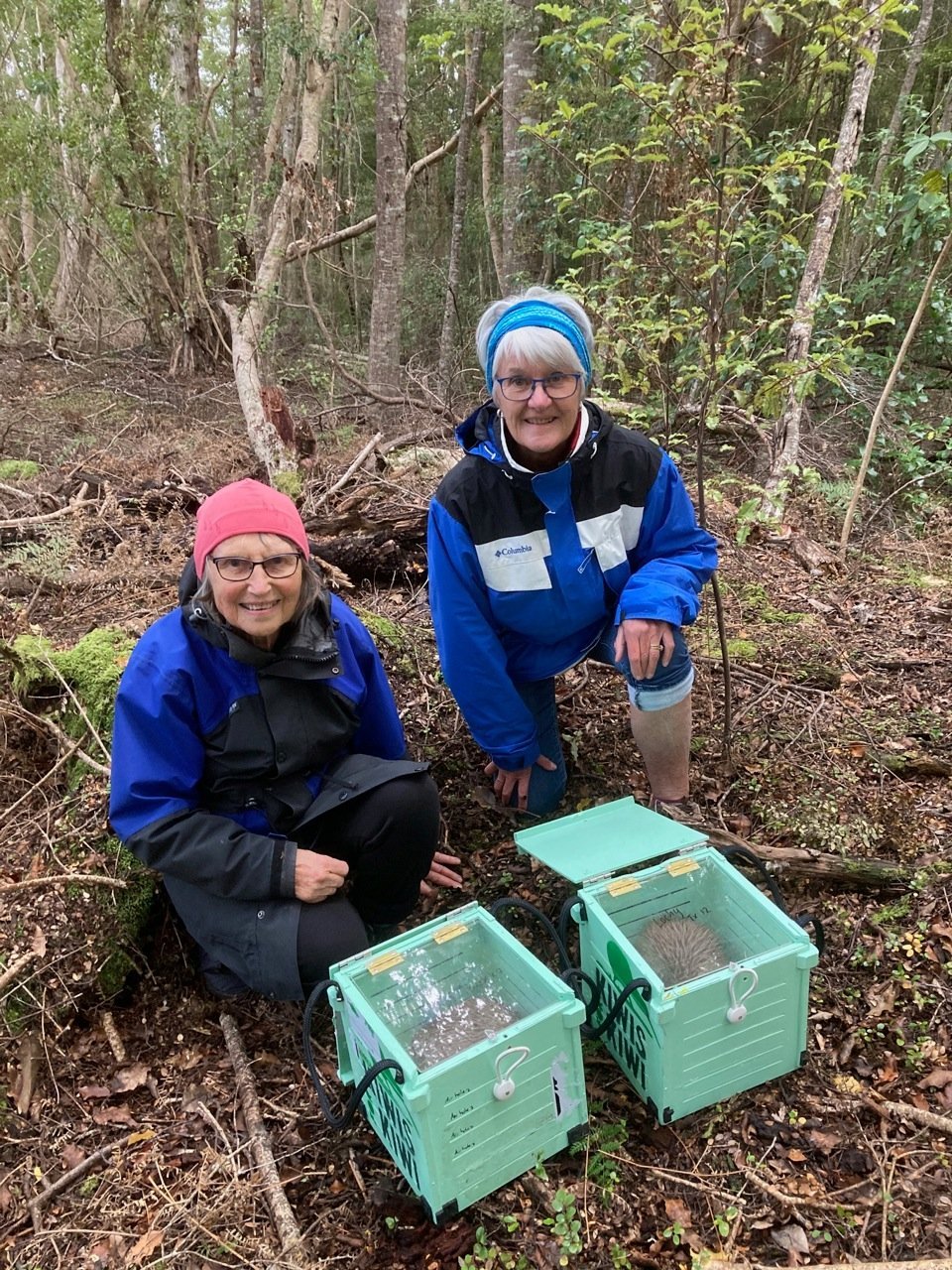 With each box strapped into the seatbelts in the back seat of Joy’s car, we were waved off with our precious sleeping passengers. Feeling nervous and excited we headed away.

The plan was to meet Jane Tansell, the local kiwi expert at the Doc Centre in Te Anau about 2pm, so we were keen to get there on time. A short stop in Gore for a drink from our thermos allowed us to open the car window to freshen the air as one of the kiwi had created a bit of smell, but both were surprisingly quiet most of the way.

It was a relief to find Jane and hand over the responsibility to her. We then carried the boxes to her double-cab ute with the large Doc boat on the trailer behind. Taking a box each and making sure not to bump them as we drove along, we set off with Jane and her kiwi dog Ink on the half-hour road trip to the Te Anau Downs boat ramp.

We had lots of kiwi questions for Jane who is extremely knowledgeable. Our job was to look after the two kiwi chicks in their boxes as she backed the large boat trailer down to the water’s edge.

Carefully handing each box up on to the boat before climbing on ourselves was a tricky operation. Once on board our next job was to hold the rather heavy boxes up off the deck of the boat so the chicks didn’t feel the bumps from the choppy waves as we headed across to the island 25 minutes away. Jane is very familiar with the conditions on the lake and expertly piloted us into a shallow bay. Lake levels being very low we had to anchor out from the shore and gingerly hand down each kiwi box before jumping into the water ourselves and wading ashore. 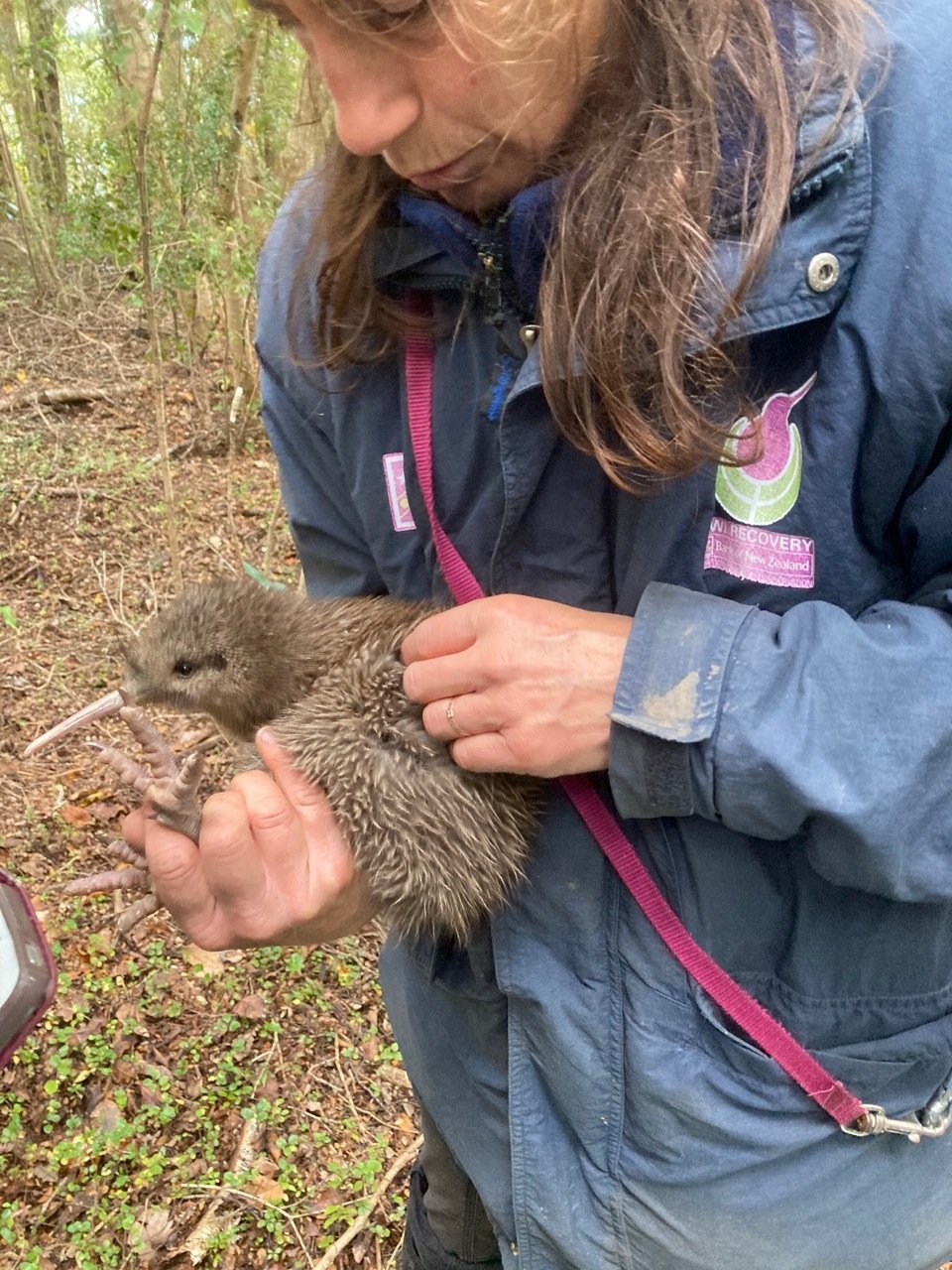 The chicks sat on the sand, guarded by Ink, while we joined Jane as she checked and re-baited a stoat trap to make sure there were no signs of predators that might have taken advantage of the low lake level and swum across from the mainland.

Our next job was to find good places for the kiwis to live. After checking out the undergrowth and not finding any ready-made burrows, Jane showed us how to make one with the right amount of depth and cover. Using fallen beech branches and moss we soon had two burrows ready for the final stage of the journey for the chicks.

Following a short mihi to thank the chicks for spending time with us at the ecosanctuary and to wish them a safe and happy time on the island, it was time to open the boxes.

They were quite vocal as Jane woke them up, lifted them out and held each one to check they were OK. We got to see their large feet, tiny ears, nostrils on the ends of their beaks and the fleshy vestigial wings under their feathers. The time had come for settling each one into its burrow. That was the easy part. Without a sound each one was gently placed into its new home. How wonderful to know they were now able to sleep safely after such an interrupted night. 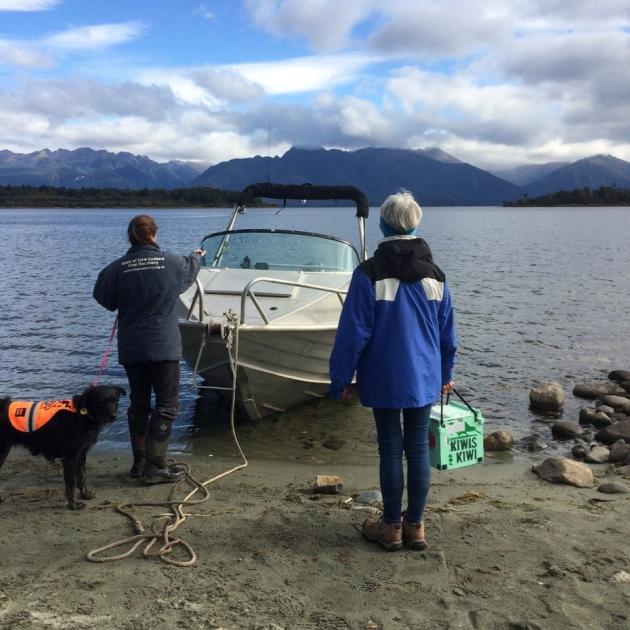 Readying the boat for the trip across Te Anau to Centre Island. PHOTO: BARBARA JOHNSTON
We quietly left them to it and returned to the boat to help Jane manoeuvre off the shore, avoiding the rocks and logs. Our final task was to check on the only other juvenile kiwi on the island, which had been relocated some weeks earlier. Yes, we could hear the beeps from its transmitter, so all was well.

Heading back across the lake we felt very fortunate to have taken part in such a special task. We had left the chicks in a safe place to continue growing and learning to live in a wild environment till the time came for them to be returned to Haast, their natural home, later in the year.

Barbara Johnston and Joy Pringle are volunteers at Orokonui Ecosanctuary, helping with the daily care of young Haast tokoeka in the kiwi creche.