Author and Observer writer Robert McCrum loves a good list. Thus he has crafted a definitive selection of essential works of non-fiction, classic titles he believes have had a decisive influence on the shaping of  our imagination — economically, socially, culturally and politically. The countdown starts here.

His No 10 choice is The Selfish Gene, Richard Dawkins’ intoxicating renewal of evolutionary theory that coined the idea of the meme and paved the way for his later, more polemical, works.

What is man, and what are we for? Remarkably, it was not until Charles Darwin published On the Origin of Species in 1859 that anyone, in our history, had thought methodically to address the reason for our existence.

Darwin's answer to this simple question was to show that every earthly species - chimps or humans, lizards or fungus - had evolved over about three billion years by the process known as natural selection.

But then, after the furious controversy surrounding that publication, Darwin's celebrated theory fell into neglect and misuse. A hundred years later, in the heady, innovative atmosphere of the 1960s, a new generation of young and ambitious evolutionary biologists found themselves confronted with a rare opportunity: the rediscovery and renewal of evolutionary theory.

Enter Richard Dawkins, a young Oxford zoologist who had been born, and partly raised, in Africa. Following some notable pioneers such as W. D. Hamilton and G. C. Williams, Dawkins pulled together many disparate strands of thought about the nature of natural selection, and organised them into a conceptual framework with far-reaching implications for our understanding of Darwin's ideas.

He called it The Selfish Gene, a title he later considered to contain an unconscious echo of Oscar Wilde's The Selfish Giant. Dawkins was convinced that an amplified and developed version of neo-Darwinism ''could make everything about life fall into place, in the heart as well as in the brain''. His book would extol, he wrote, a ''gene's-eye view of evolution''.

It was Dawkins' simple, but profound, proposition that ''the fundamental unit of selection, and therefore of self-interest, is not the species, nor the group, nor even, strictly, the individual. It is the gene, the unit of heredity''. He acknowledged that this might sound ''at first like an extreme view'' but proceeded to explore all the major themes of social theory in the light of this idea, conducting his survey in a highly readable and entertaining way.

With chapters such as ''Genesmanship'', ''Battle of the Sexes'', and ''Nice Guys Finish First'', he tackled concepts of altruism and selfishness, the evolution of aggressive behaviour, kinship theory, sex ratio theory, reciprocal altruism, deceit, and the natural selection of sex differences. In hindsight, it seems appropriate that The Selfish Gene should have been published soon after The Joy of Sex and The Female Eunuch. 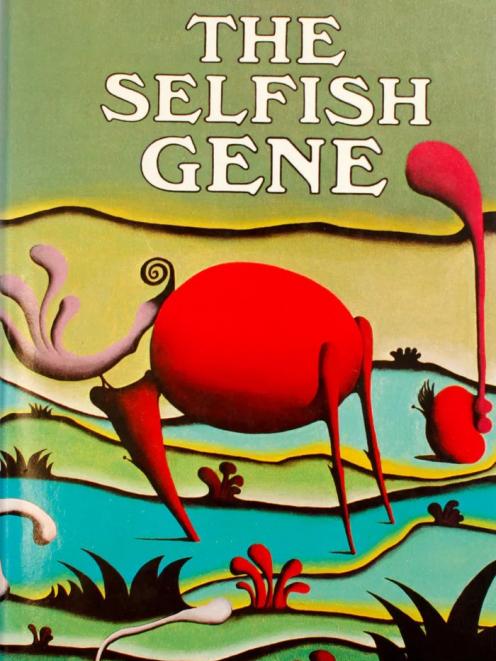 From his first page, Dawkins unfolds an exhilarating and combative narrative of the gene's-eye view of life with infectious brio. The Selfish Gene, he declares, should be read ''almost as though it were science fiction. It is designed to appeal to the imagination''.

Part of the book's compulsion derives from Dawkins' appealing certainty that he is exploring a scientific world in which ''we are survival machines - robot vehicles blindly programmed to preserve the selfish molecules known as genes''. This insight, he reports, is ''a truth which still fills me with astonishment''.

Much of this book's appeal lies in its author's barely suppressed excitement, prose that bubbles over with the intoxication of a brilliant new approach. He buttonholes his readers; he dazzles with paradox and provocation. In an introduction to a later edition of The Selfish Gene, Dawkins describes its gestation: it was a book written in extremis (the power cuts and industrial strife of the early 1970s) and, as he says, ''in a fever of excitement''. For the young author, it was, in hindsight, ''one of those mysterious periods in which new ideas are hovering in the air''.

So zeitgeisty was it that, from first publication, the reception of The Selfish Gene was highly favourable. Initially, it was not seen as a controversial book, Dawkins wrote later. ''Its reputation for contentiousness took years to grow.'' Eventually, it would become regarded as a work of extreme radicalism. But, he goes on, ''over the very same years as the book's reputation for extremism has escalated, its actual content has seemed less and less extreme''.

This is undeniable: while The Selfish Gene grew out of orthodox neo-Darwinian ideas, it actually expressed Darwinism in a way that Darwin himself might have welcomed. Rather than focus on the individual organism, it looked at nature from the perspective of the gene. It was, claimed Dawkins, ''a different way of seeing, not a different theory''.

It also addressed itself to ''three imaginary readers'': the generalist, the expert and the student. This was a high-low cohort that swiftly propelled it on to bestseller lists worldwide. Moreover, in keeping with the temper of the times, The Selfish Gene announced itself, from the first, as ''a book about animal behaviour'', arguing that ''we, like all other animals, are [survival] machines created by our genes''. For Dawkins, ''we'' did not mean just people. He wanted his description to embrace all animals, plants, bacteria and viruses. ''The total number of survival machines on Earth,'' he wrote, ''is very difficult to count.'' Even the total number of species is unknown, he conceded. ''Taking just insects alone, the number of individual insects may be a million million million.''

Dawkins - in a style that would recur in later polemical books such as The God Delusion - was never less than comprehensive in his ambitions. Here, he used ''survival machine'' rather than ''animal'' because he wanted to encompass all plants and humans, too. His argument should apply, he said, to any and all ''evolved beings''.

Orthodox neo-Darwinian he might be, but in chapter 11, he coined an idea about cultural transmission that quickly went viral within the global intellectual community: the meme, or replicator, a unit of imitation. Examples of memes include tunes, idea, catchphrases, clothes fashions, ways of making pots or of building arches: ''Just as genes propagate themselves in the gene pool by leaping from body to body via sperms or eggs, so memes propagate themselves in the meme pool by leaping from brain to brain via a process which, in the broad sense, can be called imitation.'' Shortly after this analysis, Dawkins characterised ''God'' as a meme. Thus, pages 192-193 of The Selfish Gene might be said to encapsulate most of Richard Dawkins' brilliant career, in which the theory of evolution came to offer such a satisfying and complete explanation for the complexity of life on Earth that there could no longer be a place for the possibility of God's design.

The Oliver Sacks' story contradicts biological determinism. There is neurology, genes seemingly with wills of their own, then there is the human mind.