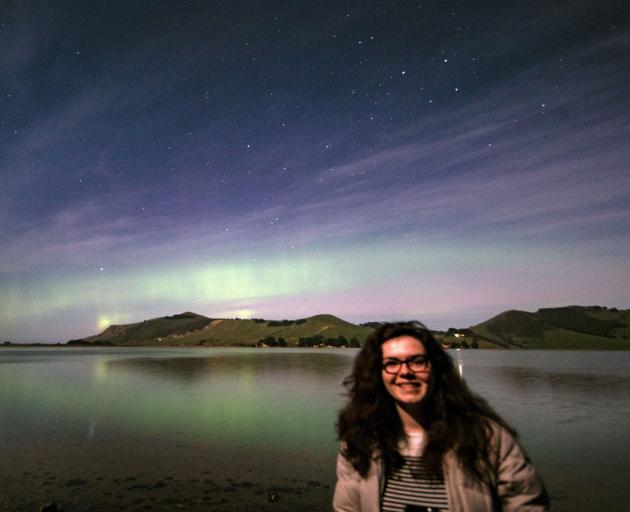 Photo: Supplied
''Oh my goodness, it's so spooky, and it's moving. It's all over the sky and the colours, just wow, WOW!''

My daughter Merope (pictured) was obviously pretty excited, early in the evening of Sunday, August 26. Despite light from a nearly full moon making the sky very bright, both she and I were enjoying an extraordinary display of the aurora. But we weren't in one of the ''classic'' aurora-viewing spots in the northern hemisphere. Instead, we were huddled together on the shore of Hoopers Inlet on Otago Peninsula, near Dunedin in southern New Zealand.

Given the ethereal nature of a bright auroral display, it's no wonder that Ngai Tahu, the original Maori residents of Te Waipounamu, believed supernatural forces were responsible for creating the dancing lights. For them, the aurora was Nga Kahukura o Hine Nui Te Po or ''The Rainbows of the Goddess of Death''.

Notwithstanding its magnificent Maori moniker, auroras are not anything to do with rainbows or underworld gods.

They are actually gas, glowing high in the earth's atmosphere. The gas glows and moves because it is electrically charged, and is interacting with a wind of material from the sun which has been trapped by the earth's magnetic field and forced to spiral around lines of magnetic force.

Different auroral colours are created by different gases glowing high above us. High in the atmosphere (above 300km), oxygen is the most common atom, and collisions there can create a rare red aurora.

The strong yellow/green light that is most common in auroras is produced by collisions with oxygen at altitudes between 100km and 300km.

At around 100km, nitrogen molecules produce a red light that often seems to form the lower fringes on auroral curtains.

Sometimes, especially in the summer, extraordinary purple auroras can grace the sky above New Zealand. While they can be hard to see with the naked eye, they are easy to photograph. They are created by glowing nitrogen gas and are powered by a potent combination of sunlight and energy from the solar wind. Purple auroras are a particular favourite of mine!