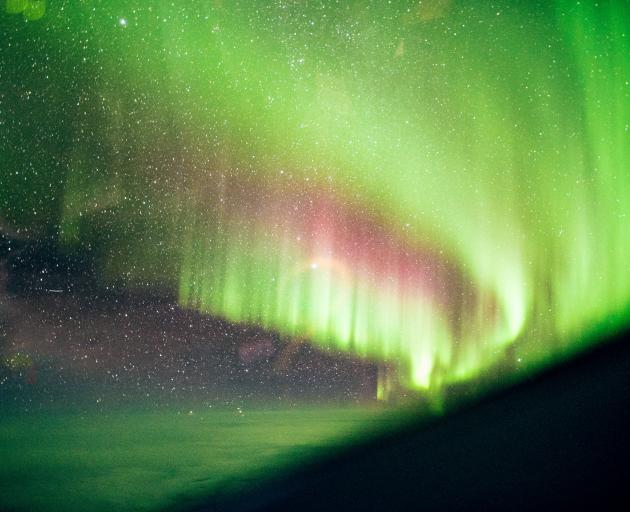 For more than four hours, all on board the were mesmerised by "the most amazing display of the aurora I have ever witnessed", says Ian Griffin. Photo: Ian Griffin
It is a truth universally acknowledged that a stargazer in possession of a long-range airliner must be in want of an aurora, writes Ian Griffin.

That's why, last Thursday night, just after 6pm, more than 100 excited passengers from around the globe boarded a Boeing 787-9 Dreamliner chartered from Air New Zealand. Our mission? To hunt down the aurora australis on the second ''Flight to the Lights''.

The southern hemisphere's first aurora charter departed from Dunedin on a Boeing 767 back in March 2017. On a flight lasting just under eight hours, participants enjoyed memorable views of the southern lights, with photographs taken on the flight being seen all over the world.

Unfortunately, Air New Zealand retired the 767s shortly after last year's flight, and at this time no aircraft in its fleet is capable of reaching the auroral zone from Dunedin Airport (the runway at which is too short and not strong enough to safely support the weight of the heavier aircraft required to reach the auroral zone).

As there was strong demand for a second flight, the organising team had to make the reluctant decision to use Christchurch as the departure point rather than our home town of Dunedin.

I am always nervous before an aurora flight; as one of the organisers I have nightmares about how my fellow passengers might treat me if we don't see anything.

Meticulous planning minimises the chance of this happening. Also, lessons learned from operating last year's flight gave me confidence that on-board cameras would not only allow us to hit the auroral zone, but also enable us to tell the pilots where to point the aircraft once we found our luminous prey.

I am delighted to report that this year's second flight was an amazing success. Not only did we find the auroral zone, we made repeated passages beneath some absolutely mind-blowingly beautiful auroral activity.

For more than four hours, all on board were mesmerised by what I would describe as the most amazing display of the aurora I have ever witnessed.

The third flight to the lights is planned for March 2019. See you on board.