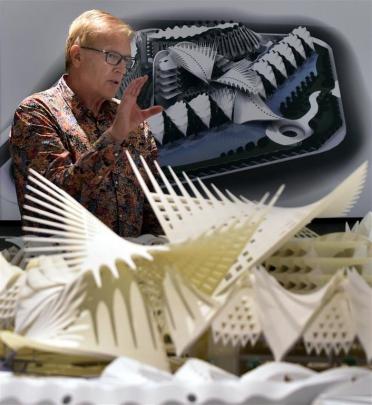 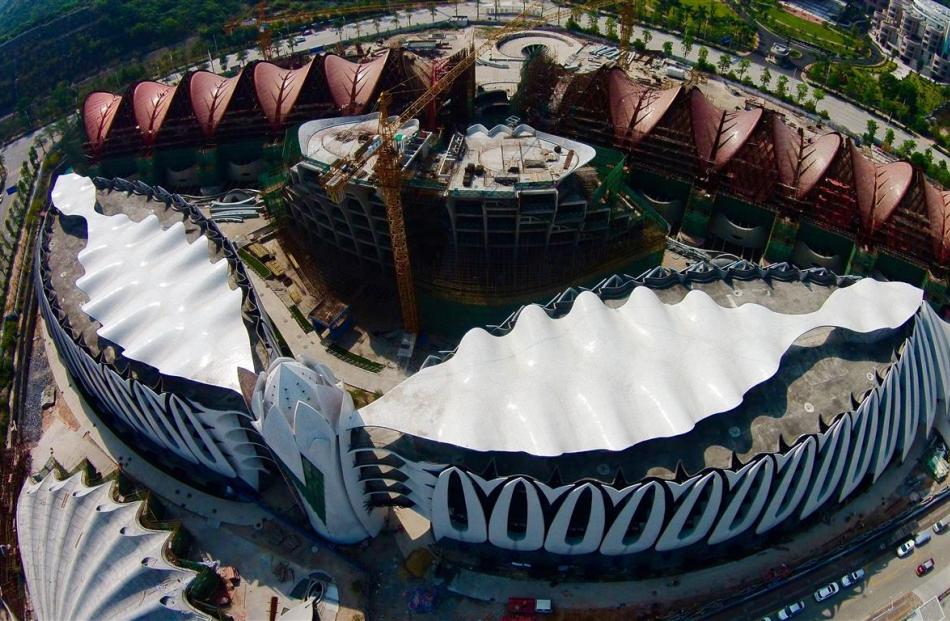 The Marisfrolg headquarters under construction, showing the fashion design studios and catwalk under the leaf-like roof forms, a hotel and restaurants (centre) and the administration and production buildings seperated by a circulation tower. The clam... 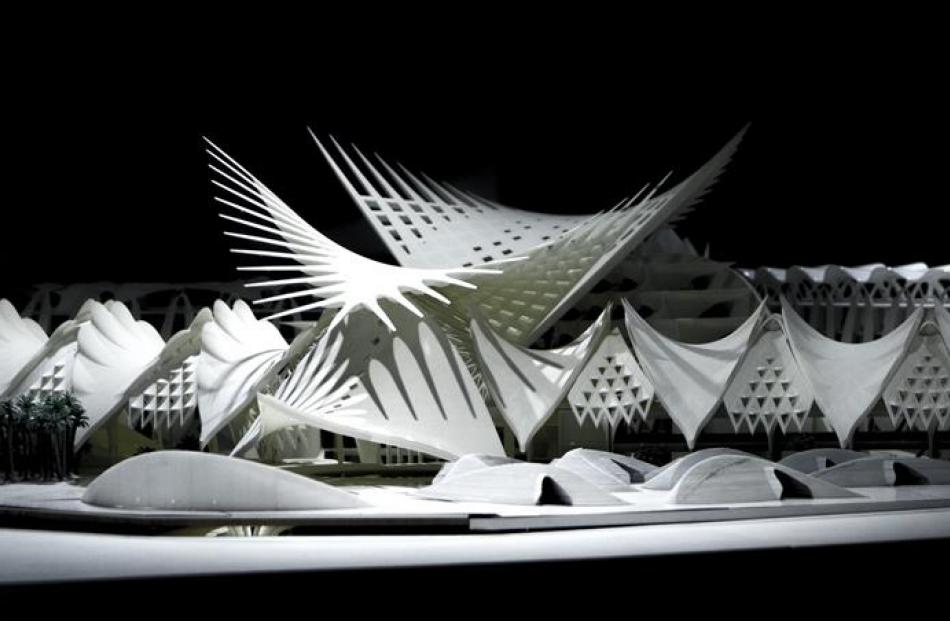 A 1:100 scale model of the Marisfrolg complex. 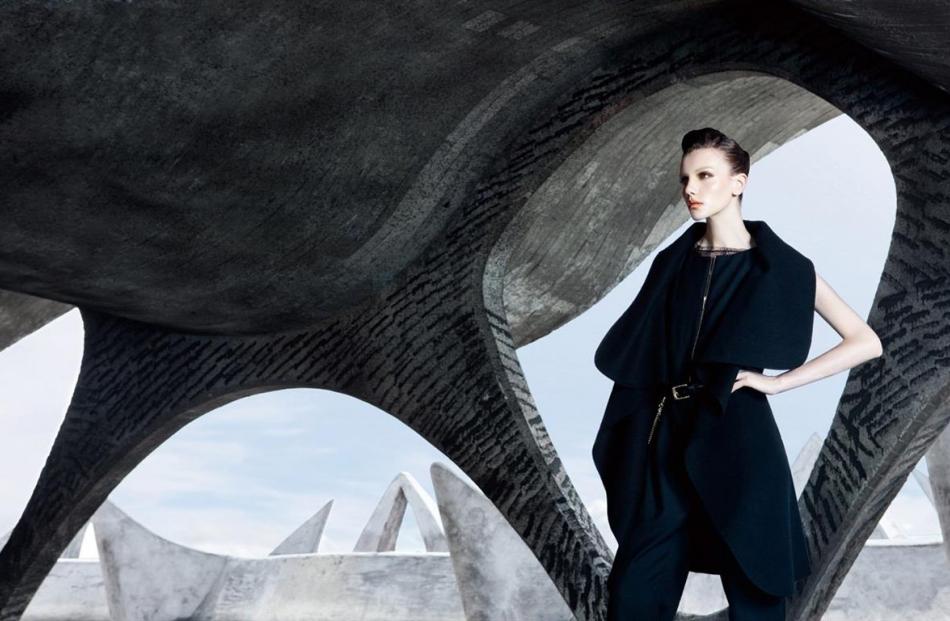 Marisfrolg shows clothing from its 2013 collection at its partially completed headquarters.

It sounds improbable: a wealthy entrepreneur approaches a Queenstown architect and asks him to design a huge fashion complex in China. But, as Kim Dungey reports, that is exactly what's happening and he's using Dunedin expertise to get the job done.

Fred van Brandenburg is designing a sculpture that people can work in.

A mix of art, architecture and geometry, the weird and wonderful 3-D models in his Dunedin workspace could be straight out of some futuristic movie.

In fact, they are prototypes for the new headquarters of Marisfrolg, one of China's leading high-end fashion labels.

Costing billions of dollars, the 120,000sq m complex in Shenzhen, southern China, is perhaps the largest single project undertaken by an architect in New Zealand. Work began in 2008 and won't be completed for three more years.

The six buildings, draped in what look like giant leaves, demonstrate van Brandenburg's belief that all forms in architecture should be derived from those found in nature. But it's not a theory he has always subscribed to.

Best known for luxury resorts like Millbrook, Huka Lodge and Wharekauhau, the South African immigrant developed a brand of architecture that took its cues from New Zealand's early settler buildings and that blended into its surroundings.

Then in 2004, he suddenly abandoned the approach in favour of a more organic and sculptural style.

The mid-career U-turn - what he calls his eureka moment - happened during a trip to Barcelona when he was struck by the innovative designs of Antoni Gaudi, famous for his flamboyant, unfinished Basilica of the Holy Family, Sagrada Familia.

Wife Dianne recalls him returning home and ripping up his drawings: "It was pretty scary at the time. He'd spent a lifetime building up clients. Then he started chasing them all away and playing around with polystyrene, plaster of paris, balloons and bits of string. I didn't know where it was going to lead to.''

Within two weeks, van Brandenburg was back in Spain, the first of nine trips he would make in a bid to learn how the design philosophies pioneered by Gaudi more than 100 years ago could be adapted to contemporary architecture.

Gaudi, the face of Catalan modernism, had not preserved his ideas through writing but van Brandenburg was in luck.

One day he made his way into one of his early buildings by waiting for someone to pass through a locked gate and slipping through unnoticed.

Inside, he sheepishly explained he was an architect from New Zealand and was welcomed by Prof Juan Bassegoda, a leading authority on Gaudi who encouraged him to look to nature for inspiration.

The Dutch-born architect says it is not just that the shapes in nature are beautiful, they are also based on a structural system that many architects and engineers fail to grasp.

Cantilevering out to capture light, a leaf is able to withstand massive forces and to defy the "enemy'' of building: gravity.

Fascinated by Gaudi's apparent free forms, van Brandenburg soon learned they were not random but that he used specific geometry to make them buildable.

"He had such a brilliant mind that he figured all this out without computers. If he could do it, there's no excuse for me.''

"Prof Bassegoda put me on to books which were in Spanish but which were sufficiently pictorial that I could figure out what Gaudi was doing. Then I started making models ... ''

About the same time van Brandenburg was bending cardboard over his steaming kettle, a delegation of Marisfrolg executives arrived unannounced at his Lake Hayes home.

Owner Zhu Chongyun (a former engineer turned fashion designer who has about 500 Marisfrolg stores and an estimated net worth of $US1.3 billion) had been holidaying in New Zealand and wanted to meet the man behind the lodges they had stayed in.

The architect explained he no longer did that kind of work and thought no more of it.

More than a year later a fax arrived, saying the company had secured a site and asking him to take a look.

"I'd forgotten about it entirely. I thought it was a scam and didn't answer her,'' he says, recalling how he almost passed up the opportunity of a lifetime.

"A second one arrived and I still didn't answer. Then a third one came on a letterhead from her corporate lawyer.''

Through their interpreter, Ms Zhu and her business partner and husband, Mr Yanhua Yao, asked for the building to be permanent, soaring but unostentatious, and for the architect to focus on "design first, budget second''.

The couple are "wealthy enough to buy New Zealand'' but there is a responsibility to do everything in the most cost-efficient manner.

"The geometries look complicated but they're easy to create and because of that, we know we're doing things in a cost-effective way ... People think that exciting architecture costs more. We're proving it doesn't.''

Given free rein, van Brandenburg took only weeks to design a series of interconnecting curvilinear concrete structures that represent a bird in flight and the client's desire to move gracefully into its future.

The atrium entrance links to a 50-room hotel, restaurants, clubs, a spa centre and flagship stores, all under a shade-giving solarium.

Design studios and a fashion catwalk are housed under leaf-like roof forms.

A man-made pond captures rain run-off from the roof, draws in the prevailing wind and uses this as a passive cooling device for the complex, 60% of which will be built underground because of planning restrictions.

Skylights and other openings allow natural light into the lower levels.

The project also includes a factory and warehousing, with a roof garden for the factory workers.

Like Gaudi, Architecture van Brandenburg is taking a comprehensive approach, designing everything from door handles to light fittings and soap dispensers, creating mosaics from reject materials like broken tiles and garden pots, and planning the landscaping that will screen out neighbouring factories and include openings in the buildings for plants to grow through: "The site is about 12 acres [4.8 ha] and there isn't a square millimetre that we're not looking at.''

The team is operating in a culture where corruption is common - "there's nothing I can do about it but they know I'm not part of it'' - and where one does not challenge the word of a superior, he says.

"New Zealand's the opposite and [Mr Yao] loves that. He knows I will not kowtow to him.''

He also has to remind the Chinese workers that using reject materials is not a sign of poverty but part of his philosophy and that while quality is important, a certain level of randomness and creativity are allowed because he wants the building to look as if it has been hand-made.

"We allow for innovation, which China has a culture of not having.''

While the project employs about 350 people in China, all design work is completed in Dunedin, in a historic brick building equipped with two laser cutters, six 3-D printers and 12 staff, most of whom are product designers in their 20s.

Finding computer software capable of replicating the "bird in flight'' design was the project's single biggest challenge until van Brandenburg discovered the SolidWorks software at Otago Polytechnic's product design faculty and graduate Griff Humphreys, a "super-genius'' who has been with him for eight years.

But access to the polytechnic's expertise and equipment was not the only advantage of opening an office in Dunedin, says the 66-year-old, who flies to China every six weeks to review progress but who still communicates through translators: "Everything is easily available here. Nothing is a problem.''

Plastic prototypes are built to an ever-increasing scale, until the team is satisfied with all aspects of the building: "Whatever we send to China, we know it can be built because we've built it and it's accurate to a millimetre or less. All the architects and engineers in China have to do is convert that to working drawings and instructions.''

Computer skills also helped van Brandenburg establish himself after he and his wife, a graphic artist, escaped apartheid by emigrating to New Zealand.

Knowing he first needed a job offer, he took his portfolio from pub to pub during the Cavaliers tour of South Africa, trying to identify an architect among the rugby team's "drunken'' supporters.

"Of course, I didn't find anyone ...'' he says, "but on the very last day there was a guy standing on his own ... and he said his best friend's cousin was an architect. It was a slender lead but the only one I had.''

For months, he called the man every Sunday night to keep contact alive.

Eventually, he and Dianne visited Queenstown, fell in love with it and went home to tell their family and pack up their belongings.

Their timing could not have been worse. The family arrived just after the 1987 stockmarket crash and exchange controls meant they could bring only $17,500 with them.

The self-employed architect also had virtually no knowledge of timber-framed construction, most buildings in South Africa being built from brick.

"It was good for us because we didn't come over as 'fat cats'. We came hungry to succeed,'' he recalls.

"And I knew I had something that an employer would want. At that stage I was one of the few architects in New Zealand who were computer-literate.''

Although he is also interested in contemporary music and art, it is architecture that occupies all his thoughts and he often gets up around 4am to sketch out something on the computer: "It's almost a disease you can't get rid of. But it's not work. It's relaxing. There'd be nothing worse to me than going to a beach and being told to relax. I'd find that purgatory.''

Nor has he tired of focusing on one project for so long: "It's fantastic because there's probably [the equivalent of] 100 buildings in this one complex and everything we do is turned into a design opportunity.''

Closer to home, he and his wife are creating a landscaped, eight-lot subdivision and the proposed Crest Hotel, with cascading balconies emulating the wave action on Lake Wakatipu.

Van Brandenburg is unsure if there will be an appetite for his style of architecture here but was pleased by the reaction of those who saw the Marisfrolg models at the Venice Architecture Biennale, a chance to shine a light on what could be achieved by New Zealanders on the world stage.

Part of the appeal, he thinks, is that people used to being "confronted'' by sharp, angular buildings find curvilinear shapes "kinder'' and more comfortable to be in.

"The most significant part of Venice was hearing the silent majority. They weren't architects or architectural critics. They were just ordinary Joe Blows and they could relate to this. I could sense there was huge joy and almost a relief in what we were doing.''