Following a new path behind the wire

I've got a year to go and I've already been here three years. But I've been coming to prison for 28 years.

I'm from up north. My life was gangs.

Of 30 of us young fullas who grew up together, there's only four left. Three of us are inside and one is a community constable.

I've been doing this course for about a year now. I was one of the first inductees.

I never would have guessed that I would have to go so far from home to find myself.

Maoritanga was always in the background, but I didn't have a big connection with it. It was something that was missing for me for a long time.

The change has come through being able to acknowledge that I come from a bigger world than just me. This makes me accountable for my actions.

If it wasn't for the people who came before me, I wouldn't be here. So I need to honour them by continuing on a better path and making sure that the people who come after me have a world that's worth living in.

I like to help people now. I'm studying social work and want to go to polytech or uni.

I know there will be some daunting challenges but I have positive peer support.

We're told here, you can't stand on your own, but if we all stand together we'll all be all right. 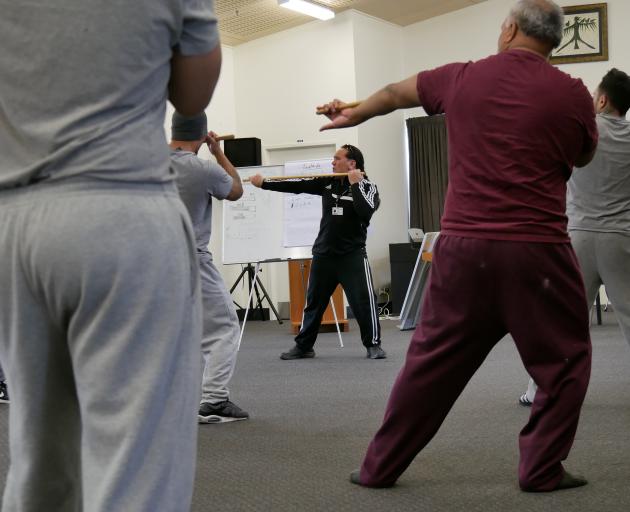 This is my first time in prison. I was sentenced for three years. I'll be in here until 2020.

I just started this programme in February.

I had sort of lost my way since coming to New Zealand. When I was out there I did a lot of pointing fingers at other people, blaming.

In here, they taught me to turn FEAR into a positive: Face Everything And Rise. Instead of blaming, own your shit. They didn't put you in here; you put yourself here.

Today's topic about emotions and thoughts; I think that's what got me in here. I reacted to something personal that my cousin told me. It was pure anger. But being in here, they've taught me, there's a table and there's heaps of different shit on this table. Just grab your own shit. If it's not your own shit then leave it.

It relates to when my cousin told me this thing; I picked up his shit. It wasn't my shit to pick up. So, I've learnt that.

I've also learnt to forgive. To be honest, when I got released, I was going to give my cousin a hiding. But being in this programme has taught me, if you do that, you'll be back in here, but if you forgive and move on then it's gone and you don't need to worry about it.

I don't feel like I'm just in a Maori programme. It's helped me reconnect with my culture.