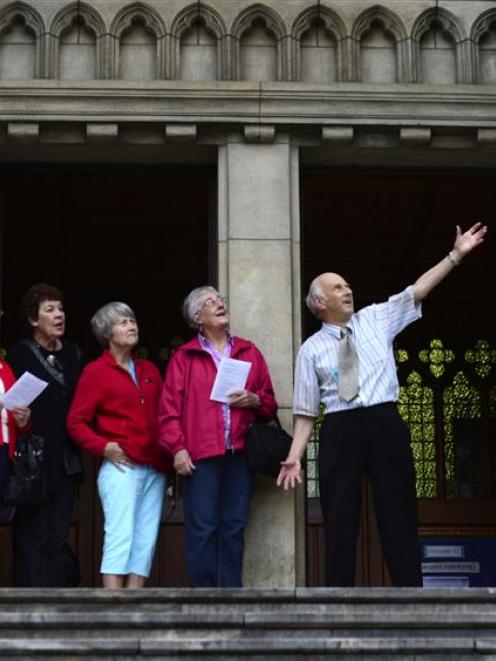 Guide David Horne describes the facade of St Paul's Cathedral to Eva Eaton, Margaret Tagg, Helen Harrex and Noelene Cook, all of Dunedin. Mr Horne belongs to 39 organisations and is secretary of 15 of them. Photo by Peter McIntosh.
As a school principal, David Horne hated paperwork. Now retired, he is the secretary of no fewer than 15 organisations.

Also a member of 24 other groups, Horne could be described as the ultimate volunteer.

Aged in his 70s, the Dunedin man spends about 40 hours a week on secretarial duties and meetings. That includes the 45 minutes it takes him to walk and run from his St Kilda home to meetings in central Dunedin - no big deal for a man who climbed Mt Kilimanjaro four years ago and likes to stay physically active.

After giving up teaching, Horne spent his first Monday as a retiree finding out all the activities he could be involved in.

''Of course, I didn't get the secretary's jobs immediately,'' he explains.

''But as time went by, people were looking for secretaries and I just said yes.''

Twenty years on, he handles the minutes, agendas and correspondence for a wide range of organisations, from the Carers' Society, the Dunedin Council of Social Services and the Field Club committee to a Lions club, the Otago Rock and Mineral Club and the St Kilda Community Club.

He plays bowls, is an ESOL tutor, a reader at Bathgate Park School, a French-speaking guide at St Paul's Cathedral and a lay minister in the Anglican Church.

''Eight or 10 years ago I appeared on TV because I had the most number of volunteer jobs in New Zealand. It would have been higher then. It could have been about 50,'' he says, adding it would be impossible to do so much if he were not single.

He has also been to 258 countries - more nations than any other New Zealander - and sometimes goes to Los Angeles for the weekend to attend meetings of the Travellers' Century Club.

Horne says it helps that he is an organised person. Invariably, he is in bed at midnight, up at 6.15am and in his office by seven. He finds time to read National Geographic but hasn't turned on a television in 14 months.

''I could not just play bowls all day and paint the house. That would drive me up the wall.''

However, longer working hours and more time spent at home in front of computer and television screens has had an effect on voluntary organisations, he says. 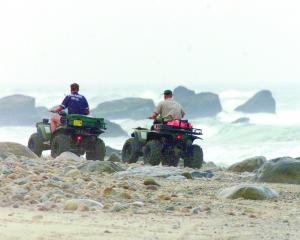