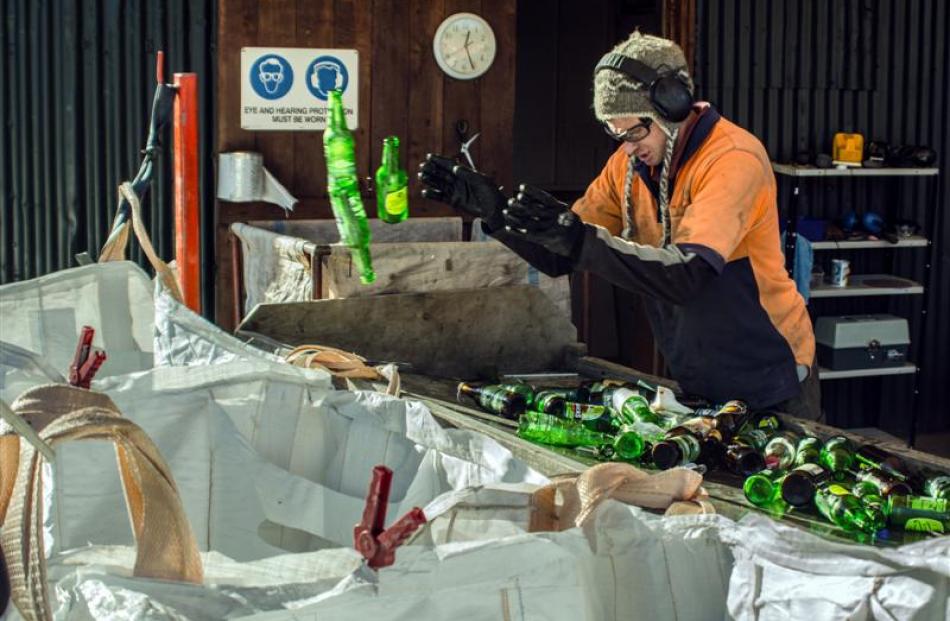 It's clear what makes for good glass recycling.

When it comes to recycling, glass is one of the first materials that people think of.

Maybe it's because glass is such a tactile material, it's heavy, cool and smooth.

And it's the classic packaging material for liquids; think the original Coke bottle, beer and wine.

The great thing about glass is that a bottle can be recycled back into a bottle (something that doesn't happen with most plastics).

And we even have a factory in Auckland that can recycle glass onshore, a rare thing in a recycling system that mostly relies on sending our materials overseas.

But glass has its own recycling challenges.

It's heavy, making it costly to transport, and it's breakable.

And used glass can only be recycled into new glass containers if it's first separated into three different colours: brown, clear and green.

Last week my attention was caught by an article about problems with Southland's glass recycling.

Southland disAbility Enterprises sorts Southland's recycling after it is collected from households in the region.

Their workers stand beside a conveyor belt, picking the glass out from the cardboard, cans and plastic picked up with it.

It's not a cheap system.

The recycling company revealed last week that it is costing $120,000 a year to remove contaminants and clean the glass, and $100,000 to repair machinery damaged by the glass shards.

The broken glass also contaminates the other recyclables (especially cardboard and paper) and decreases their value.

At the end of the sorting process, Southland disAbility Enterprises pays a company, Southern Aggregate, $54,000 a year to stockpile the glass.

It may or may not eventually be used in roads.

As a result of the mounting costs, the manager of Southland disAbility Enterprises, Ian Beker, said publicly last week that he thought Southland should stop collecting glass for recycling.

While I don't agree with his conclusion, it's refreshing to see someone speaking out about the problems of recycling glass from commingled collections.

Those problems are well known in the recycling industry, but are not so often spoken about in public.

Imagine taking a bin of glass, smashing it up with a hammer, mixing in bits of plastic, paper, cardboard and bottle caps, and then jumping up and down on top of it.

That's what recycling looks like after it's all been picked up from the same bin.

Now imagine spreading that mess out and trying to separate the broken glass from all the other (often sticky and smelly) materials.

The conveyor belt never stops and the hero is left trying to put the pieces back together again.

If only there was a fairy godmother to help.

Southland disAbility Enterprises says their 10 sorters do a good job of picking out the glass pieces from the mixed-up recycling, but they can't sort it by colour.

Because it's not colour sorted, their glass can't be sent up to be recycled by the O-I glass factory in Auckland, which makes jars and bottles.

Their only option is to pay for it to be stockpiled and hope that it ends up in the roads.

Whether that is real recycling is a very debatable question.

• It's not the first glass mountain to be built from a commingled collection. In 2012, I saw a huge pile of contaminated glass from Queenstown's commingled recycling.

I've also seen photos of a giant glass pile that built up in Auckland a few years ago.

I didn't expect glass piles to be pretty, but the reality was shocking.

There seemed to be almost as much contamination as there was glass; everything from CDs and old sneakers to pumpkin plants that had grown from seeds in people's organic waste.

So why on earth would you collect recycling that way?

Commingled recycling collections started coming into fashion about 10 years ago because they were cheaper and had been adopted overseas.

Unfortunately, when costs are squeezed out at the collection end, they balloon out further downstream as the processing costs go up and the quality of the recycling goes down.

Luckily, many councils around the country are switching on to better ways of collecting recycling.

In both Dunedin and Wanaka, household glass is collected separately from other materials and colour-sorted into the truck at the kerbside.

At Wanaka Wastebusters we colour sort all the glass from our business recycling collections too.

Once it's colour-sorted, all that glass is sent to Auckland to be turned into new bottles and jars.

Although glass is a heavy material to transport, the carbon emissions are offset by the savings of using cullet (recycled glass).

Making glass is a very energy-intensive process, and cullet needs less energy than virgin materials to be melted and transformed into new glass containers.

It's true that separating glass does require a little bit more effort from householders.

You have to put your glass in a separate bin, and in Dunedin keep track of the recycling pick-up days.

But the reward is being part of a system that really works. When Wanaka and Dunedin people put glass out for recycling, they can feel confident it will be made into new glass bottles and jars. And isn't that what real recycling is all about?

• Gina Dempster is communications officer at Wanaka Wastebusters. Each week in this column, one of a panel of writers addresses issues of sustainability.

• Colour-separated glass from Wanaka and Dunedin is made into new bottles in Auckland.

• An A05 stamp on the bottom of a bottle means it was made in New Zealand.

• There is only one glass manufacturing plant in New Zealand, the O-I factory in Auckland. Bottles and jars made at the Auckland O-I factory contain 63% recycled content, on average.

• Every 10% of recycled glass used in production reduces carbon emissions by about 5% and energy use by about 3%.

• Keep pyrex, china or drinking glasses out of your glass recycling bin. They are designed to resist heat and cause bubbles and breakages in new glass bottles.