Going the distance to get to school 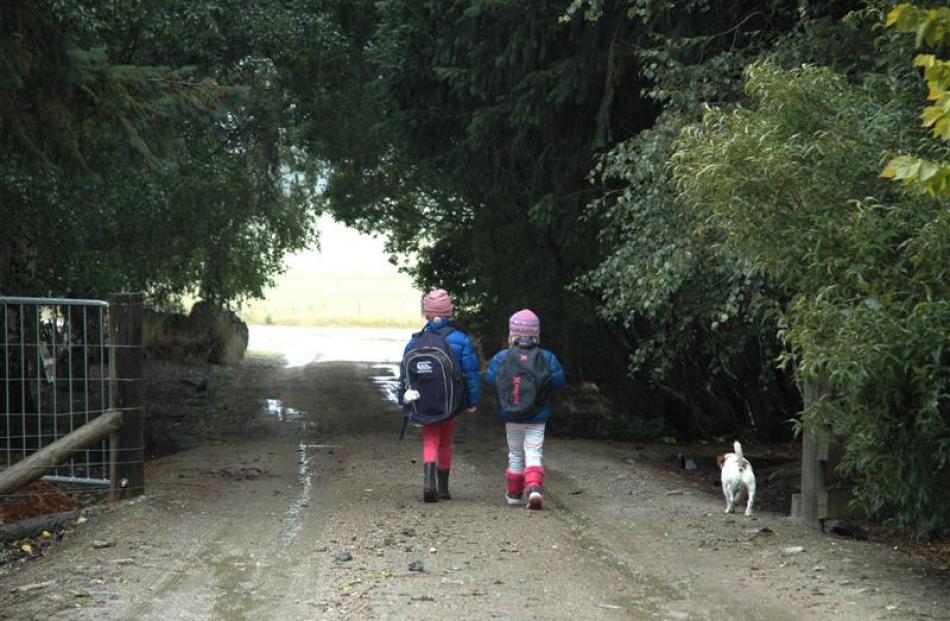 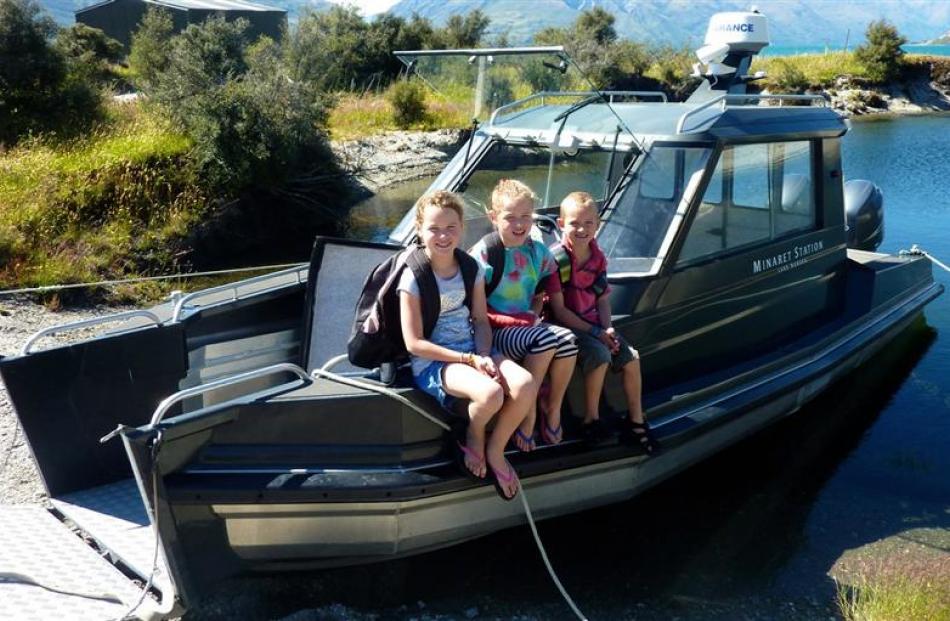 For the Wallis family, (from left) Alice (8), Phoebe (8), Angus (6), travelling 45 minutes to and from school each day via farm truck, boat and van is nothing out of the ordinary.

As another school year looms so, too, does the weekday routine of actually getting children to class. For some, that means going the distance, as Shane Gilchrist discovers.

''If it is a smooth lake we play and you can move or guess what we are going to do for the day. But on a rough lake we have to sit in our seats for the whole way. When we get there I race to the bus. I get on and one of my friends said, `You are early - it was only 8.20 when you should be there at 8.30'. But it doesn't really matter ...''

Eight-year-old Alice Wallis' story might be relatively short, but her weekday journey is a wee bit longer than that typically taken by the many thousands of New Zealand children who return to school next week.

Even though Makarora School can be seen from Minaret Station, on the western shore of Lake Wanaka, it still takes 45 minutes to make the one-way trip by (as Alice has explained) farm truck, boat then bus.

Annabel Wallis, mother of Alice, her twin Phoebe and six-year-old Angus, says her children love the adventure, despite the varying conditions.

''On nice days, the kids might jump off the boat on this side and swim to shore. It can be fun. It doesn't worry them at all. It makes the day exciting.''

The time it takes to cross Lake Wanaka depends on the weather. On a still day, it takes 10 minutes to get to Camp Creek, on the eastern edge of the lake. However, if it's rough - which, according to Mrs Wallis, is 90% of the time - it can take up to 20 minutes. At Camp Creek, the children wait to be collected by a school van and it's a 15-minute drive along SH6 to Makarora School.

''It takes 45 minutes in total one-way,'' Mrs Wallis says without a word of complaint. She and husband Jonathan had considered home-schooling but, once they worked out the logistics of getting their children to school, they decided on the latter option.

''I do all the boating and I am proud to say that they have not missed a day of school yet due to a rough lake. Some days it's a case of holding on tight; other days it's beautiful and calm. They don't know any different. They've been doing the trip since they were babies.''

''They travel the furthest. But there are parents throughout New Zealand who put themselves out in order to get their kids to school.

''And they are to be commended, because it is a big deal. They could have taken the option of home-schooling their children, but they have chosen to bring them to school.''

Makarora School will open on February 3 with a roll of 12 pupils, most of whom are eligible for a Ministry of Education conveyance allowance, paid to caregivers to assist with the costs of transporting children to and from school when no other suitable form of transport is available. Where eligible pupils live a considerable distance from a Ministry of Education bus route, they may also be paid a conveyance allowance to get to the bus route.

This year marks the first time the school has a Ministry of Education-funded bus, at ''a very reasonable contract'', Mrs Ward explains.

''We take direct resourcing funding from the ministry; that means it goes straight to the school and we pay the contractor to run the bus.

''Previously, the Wallis family had very generously bought a van, which they shared with other families. It was a private arrangement.''

Mrs Ward, too, faces a sizeable commute to school.

She lives at Hawea Flat, some 60km from Makarora.

''It's me who is often the problem. If there is a slip, I can't get through to school.''

Deep in the Maniototo, among the scattering of homesteads in the valleys of Paerau, Styx, Serpentine and elsewhere, residents are still coming to terms with the closure of the local school 18 months ago.

Shut down by the Ministry of Education in August 2012 because of a lack of pupils, Paerau School's demise means some children face a 60km one-way journey by car and bus to the nearest primary school, in Ranfurly.

And for their parents, that requires an increased investment, both in time and money.

Erin Elworthy and husband Simon bought sheep and beef property Lynbrook Station about six years ago. Pregnant with her first child when she arrived in the district, Mrs Elworthy says a key reason for the move was the presence of a school in the area.

She and neighbour Nic Zuppicich, a mother of two (including 5-year-old Lucy) who runs an architectural design practice and whose husband manages a large dry-stock farm, rue a school-day routine that involves an almost 50km round trip to the closest school bus stop and back. Add the fact their children also need to be collected in the afternoon and the distance doubles to 100km. That's about 20,000km per school year.

Though each family qualifies for the Ministry of Education's conveyance allowance, which provides them $944 per year, both mothers note that makes a small dent in travel costs.

''There are so many families in our situation and all we are asking for is for it to be worked out so that it is fair and equitable for all. This allowance was last gazetted in 1986. Has the cost of running a vehicle and fuel not gone up?''

On a good day, either woman (with smaller children in tow) could be back home in an hour. However, the winter months often mean slick, icy, unsealed roads and a doubling of time, equating to up to four hours per day spent ferrying children to and fro.

Although the Correspondence School was contacted in the hope children could be dual-enrolled - i.e. combine that form of home-based schooling with attendance at their current school in Ranfurly - that didn't prove possible.

And while the friends have been sharing travel duties the commute still has an impact.

''Time is a huge factor in our situation ... 10 hours a week of travel time, equated into dollars - even on the minimum wage - is a huge chunk of someone's [potential] income,'' Mrs Elworthy says, adding that extracurricular activities are also affected, ''as you have the rest of your family to think about''.

Their daughters, too, can get worn down by all the travel.

''There are days when they are simply too tired to go to school.''