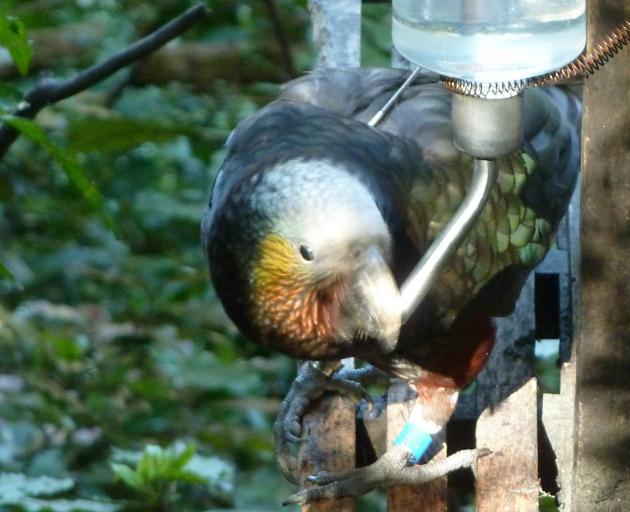 I hope you took the opportunity to meet Sirocco, the star attraction at Orokonui, in September. Few other birds can match the magic of that ambassador for his species. The personality of parrots seems to connect with the human sense of humour particularly well.

While Sirocco cannot be a constant guest, Orokonui's kaka, also rare in the wild, share his entertainment value for visitors. They are usually to be found around the platform feeding station, clambering in the trees above the feeder, doing a little gymnastics, or gnawing away at a branch to access the sap. Perhaps because some of our birds started life in an aviary, the feeding stations play a central role in their lives, whether or not they are hungry. The presence of one bird will often result in others flying in, more to socialise than to feed, though they are not averse to squabbling over whose turn it is to drink or access the hopper. The greater the number gathering the more varied are the calls, from a contented cooing to raucous squawks in the branches of the big trees above. 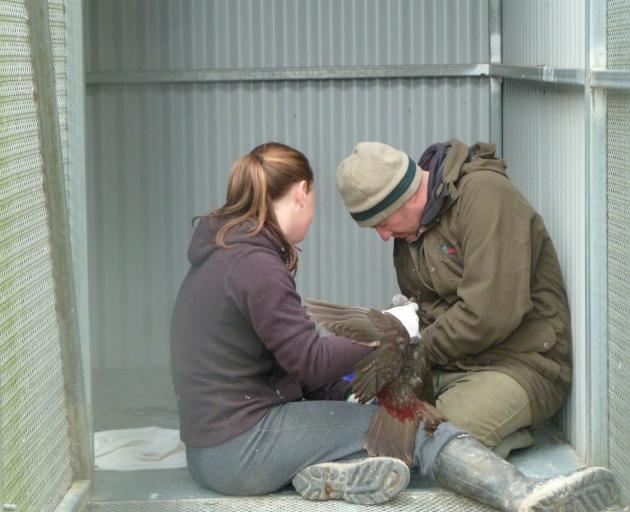 Orokonui Ecosanctuary conservation manager Elton Smith and ranger Kelly Gough at work in the aviary banding kaka. Photo: Alyth Grant
The numbers of kaka in the sanctuary have noticeably increased. There are now about 40. We receive a few aviary-bred birds from the Dunedin Botanic Garden and from Bush Haven, a private aviary near Invercargill. But Orokonui also produces its own progeny. Until a few months ago our own young birds were easy to tell, as they were not banded. But now that has been done.

If you are visiting Orokonui, or are lucky enough to live in one of the settlements near the ecosanctuary, you may spot a bird with a broad band in mediterranean blue - on his right leg if it is a male, and on the left in the case of a female. That tells you it is a juvenile, and one of Orokonui's own. There will be a different colour on the other leg, each combination of colours unique, to ensure that identification of each bird is possible.

Banding is a tricky process, usually done at the end of the day or before the working day begins. The birds need to be enticed into the aviary to be fitted with bands. How to do it? 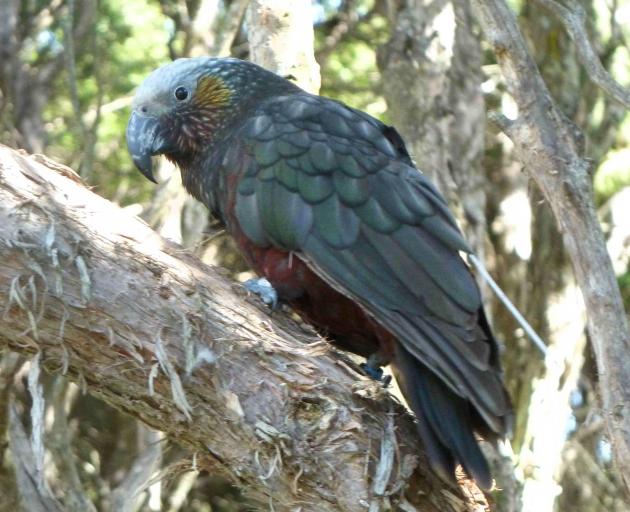 An elderly friend, Mrs Roto, possibly Orokonui's oldest kaka. Photo: Alyth Grant
The regular supplementary food provided for kaka is in the form of specially formulated pellets, designed to keep them in good breeding condition. But that was not always the case. We used to give them a delicious mixture of cashew nuts, almonds and sunflower seed, which they loved. That is, until we learned that feeding kaka on nuts was like feeding children on chocolate. And indeed, making the transition to healthy food was just as fraught as trying to wean children from sugary drinks. A kaka would approach the freshly filled hopper and swish through the hopper with its beak, sending expensive pellets flying in all directions in its search for nuts, until they accepted the new normal. At present, even the sugar-water is almost surplus to requirements, as the bush is in flower, providing the natural food that is best of all for them. 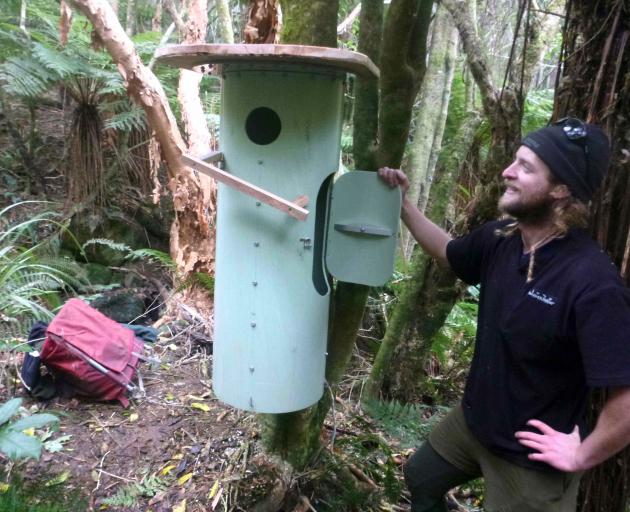 A luxury home: Geoff Clark displays one of the new nesting boxes he has built and installed for Orokonui kaka. Photo: Elton Smith
So it didn't take a lot of lateral thinking to come upon a way to catch the unbanded juvenile kaka: fill the hopper in the aviary with the old mixture of nuts and seeds. It doesn't take long for curious kaka to make a discovery, and so, one by one, they were caught and banded. Thirteen of them.

Of course it was not just the juveniles who were thus lured into the aviary. It provided a chance to check the wellbeing of other birds as well. In one case an old - no longer functional - transmitter could be removed at last. Its wearer was doubtless grateful for losing that unnecessary small burden. But given that it was eight years since all other transmitters were removed, clearly that bird had been avoiding all enticements to capture for a long time!

But the reward conservation manager Elton Smith received for arriving at 5am to do some banding one morning was to find none other than Mrs Roto, one of our original birds, in the aviary. She was "elderly" when she came to Orokonui, and must by now be all of 34 years old. We knew she had found another mate since the sad demise of her former hubby Mr Roto, as she had been seen with chicks since then, but it is unknown whether she is still breeding. 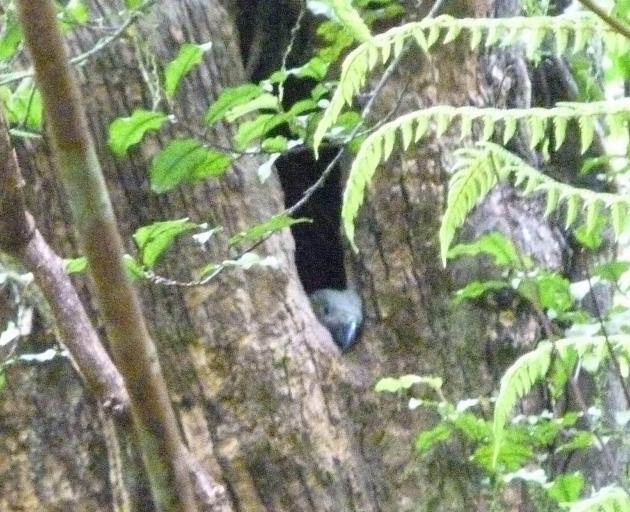 Am I ready to fly? A kaka chick of a previous season peeks out at the world from its nest in a hollow tree. Photo: Elton Smith
With the numbers of birds increasing, nesting sites soon will be at a premium. Kaka like to seek out larger trees with a convenient hole in the trunk. The Orokonui forest, being largely regenerating forest, has only a limited number of big old trees, so a project is underway to build and install capacious nesting facilities for them. There will be no housing shortage for Orokonui birds in the coming season!

Watch now for male birds feeding. They have the job of feeding their mate as well as their chicks. That means, of course, that nearly half the sanctuary's kaka, the females, will be out of sight for a while, incubating eggs and raising chicks, as they stay on the eggs and with the chicks fulltime until the family fledges. That is about two months in all. So if you miss seeing kaka during your visit, never fear, they will be back in increased numbers soon.

Alyth Grant is a regular volunteer and guide at Orokonui Ecosanctuary