By Mike Houlahan
1 Comment
Thousands of New Zealanders were shot and killed in World War 1 but a very lucky few, including three Southerners, had the incredibly good fortune that something in their top pocket stopped the bullet that otherwise had their name on it. Mike Houlahan considers the stories of a favoured trio, and that of a fellow soldier who was not as blessed.

The left breast pocket of a soldier’s uniform, for reasons of sentimentality and superstition, is the most important.

It rests right above the heart, so is often used to stow precious personal items such as a bible, diary or family photo, or added protection such as a pay book or hip flask.

There are plenty of stories in folklore of lives being saved by an item in the left breast pocket, but far fewer which have been documented.

For three southerners who served in World War 1, the contents of that pocket meant that they came home to tell their tales.

The splendidly named Sergeant Major Georgia Francisco Almond Sargeant was a rarity in the New Zealand army hastily assembled in 1914: he was a professional soldier.

An Englishman with Spanish antecedents — hence the name — Sgt Maj Sargeant abandoned a career in shoemaking to serve with the British army for more than 20 years, in both India and South Africa, before moving his family to the far less exotic township of Owaka.

His references from the Norfolk regiment, where he reached the rank of colour sergeant, were solid: "steady and reliable, understands horses, a very good accountant".

The heavily tattooed Englishman was hired as an instructor by the army, and at the start of the war in 1914 he was in charge of organising the 14th South Otago company territorials for dispatch to the war as part of the Otago Mounted Rifles.

Sgt Maj Sargeant and his South Otago recruits landed on Gallipoli on April 25, 1915, and a fortnight later, on May 9, he joined the long list of casualties after suffering shrapnel wounds to his left side, right shoulder and left leg.

A bible in his left breast pocket was later found to have a piece of shrapnel lodged in it, that would have struck just above Sgt Maj Sargeant’s heart. 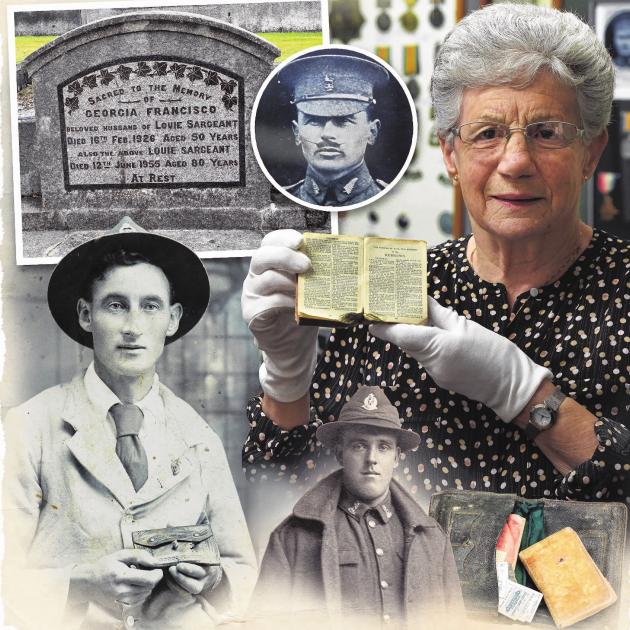 Glenys Gregory holds the bible which saved her grandfather Georgia Sargeant’s life. It is one of the many family treasures kept in Owaka Museum. Bank interest ... Robert Jones shows the wallet which saved his life after slowing a bullet that went through his chest. Not so lucky ... John Shankland, whose wallet was not robust enough to repel a sniper's bullet. PHOTO: STEPHEN JAQUIERY

The good book, hailed as a life-saving testament, was — ironically but fortuitously — not even his: it had been left behind by an Australian soldier Sgt Maj Sargeant had talked to earlier and he was intending to give it back.

It is now on display in Owaka Museum.

Discharged as unfit for service, Sgt Maj Sargeant was rehired as an instructor by the army after his return to New Zealand, but soon after was sent back to Otago with the ominous note on his file that he was "hardly up to the standard required" to be an instructor.

"Sergeant Major Sargeant is keen and attentive to his duties but is suffering from a disability caused by wounds and cannot stand the strain of continuous instruction."

This was the first of many run-ins Sgt Maj Sargeant was to have with army bureaucracy in the next few years.

His lengthy file reveals issues with his pension, his pay, a promotion and his medals, rows over whether the army should cover transport costs for his wife and children, and a convoluted wrangle over whether he should be recompensed for moving expenses after the army transferred him from a drill instructor role in Owaka to a post in Milton.

There was also an audit of his expenses, in which the purchase of an automatic pencil sharpener was questioned.

Sgt Maj Sargeant appears to have changed when he returned to Otago, and various disappointments heaped upon him by the army cannot have helped.

On February 6, 1926, shortly after his eldest son’s wedding, Sgt Maj Sargeant shot himself.

He lingered painfully for a further 10 days before he died in Owaka Hospital.

At the inquest, his daughter Ruby, who had been home at the time, said her father had been in bad health, could not eat or work, had been very depressed and expressed suicidal thoughts.

The Otago Daily Times reported a witness who knew Sgt Maj Sargeant well: "His nature had changed on his return from the war and he was very much quieter, latterly becoming somewhat morbid and taking a pessimistic view of life."

With mental health not having the same profile in 1926 as it does today, Sgt Maj Sargeant was one of hundreds of men whose post-war trauma went unaddressed, in his case with tragic consequences.

A paybook and a photograph of his girlfriend preserved Charles Lyons Carter and ensured he was able to fulfil his brilliant scientific career.

An award-winning physics scholar, the Invercargill student paused his studies in late 1915 to join the army as one of the many who enlisted for the reinforcement battalions formed to replenish the ranks after the slaughter at Gallipoli.

Appointed a sergeant in New Zealand, he was reverted to private after arriving in England in 1916 — usual practice, as non-commissioned officers were expected to earn their rank in combat.

Pte Carter’s war was a short but shocking one.

Knocked unconscious by an exploding shell on September 16, Pte Carter was soon shipped back to the Somme.

Just 11 days later he was wounded by a machinegun bullet which entered below his left nipple and exited above left hip.

On its way through Pte Carter’s body the bullet struck the treasures in his left breast pocket: his paybook and a photograph of Mary.

"The family advise they still have his pay book which was in his top pocket when wounded," his records say.

"It has a slice right through diagonally but not all the way and they understand this saved his life."

The physical wounds Pte Carter suffered were bad enough, but the mental ones were as severe: his military medical record reveals he was suffering from shell-shock, insomnia and headaches.

Whether his trauma contributed to a six-day detention Pte Carter served for being absent and drunk while still in hospital is unclear, but a merciful doctor obviously decided Pte Carter had seen enough of war and graded him unfit for service.

Charles Carter went on to become an associate professor at the University of Otago.

He was a co-author, alongside Medical School dean Charles Hercus, of a highly influential study on iodine levels in New Zealand soils, a paper which contributed to the country’s salt having the vital mineral added to it.

Robert "Bob" Thomas Jones swapped a life of labouring for the Southland County Council for that of a soldier.

An early volunteer, like Sgt Maj Sargeant, he also landed at Gallipoli on April 25, but he was not unscathed as long.

Part of the May 3 failed attack on a hill known as "Baby 700" — a day one objective which had not been captured — Private Jones fell with a severe knee wound and was invalided to safety.

After another stint in hospital with jaundice, Pte Jones was sent to France in April 1916 and pitched into the Somme offensive.

On September 28, he was wounded again, in the buttocks and also the chest by a bullet which crossed across his body from right to left and left a gaping wound.

However, it could have been much worse: Pte Jones’ wallet was in his left breast pocket, absorbing some of the bullet’s momentum and saving his life.

Unfit for service, Pte Jones returned home in early 1918, but not before posing for a photograph holding the billfold that saved him.

Few soldiers struck in the left breast pocket were as lucky as Georgia Sargeant, Charles Carter and Bob Jones: Jack Shankland was just one of the many who did not come home to tell his story.

A farm labourer from Tokonui, John "Jack" Shankland was a prominent local sportsman and long-standing member of the Mounted Rifles before he left Tokonui to go to war.

Wounded at Passchendaele in 1917, he was back on the line in 1918, just in time to play his part in trying to repel the German spring offensive.

Having survived some of the heaviest fighting of the war, Rifleman Shankland’s death came, cruelly, on a quiet March day in the sector where he was posted.

While the main fighting that day was elsewhere, German snipers were out and about and one found and killed the 26-year-old.

The fatal bullet went through his left breast pocket, piercing the wallet and bible he kept there.

After his burial in Colincamps, France, Jack Shankland’s personal effects were sent home to his grieving parents: the war-torn bible and wallet are now in the collection of Waikawa Museum.

- Research by Iain Davidson was invaluable in writing this article.

Nothing could save kiwis executed by British firing squad.