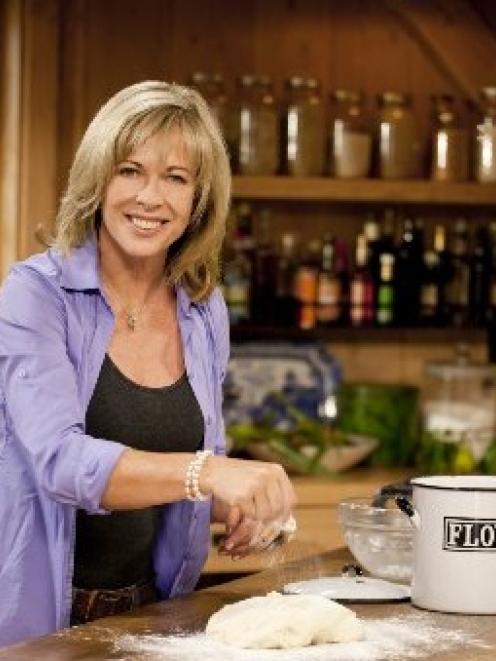 Photo supplied.
How did a possum-trapping, deer-netting, Whanganui River-dwelling wild child evolve into an author with three books recently in the top 10 on the Booksellers NZ non-fiction best-sellers list and a television series sold to 79 territories worldwide?

Catherine Pattison talks to some-time Wanaka resident Annabel Langbein about how her unconventional teenage years and early 20s shaped her attitude to food and help her stay grounded as her star continues to rise.

At the Wanaka cabin that is her refuge from city life and the international whirl of cook-book launches and fronting fresh-food campaigns, Annabel Langbein is taking a breather from her busy schedule.

"Here I'm actually at my happiest. It's this simple, quiet, connected life, where I can take some time to think about where I'm going and what I'm going to do next."

She will once again get the chance to spend film-shoot-snippets at her homely bach, as it will provide the backdrop to a second series of the popular Annabel Langbein The Free Range Cook, when filming starts next month..

Based on sourcing local ingredients and putting together tasty, stress-free meals for family and friends, it is not a new idea for Langbein.

She has been adhering to these principles since she was a teenager.

The end of her sec-ondary school years coincided with the end of the "hippy run" and Langbein and her friends were fully-fledged feminists.

Aged 16, her "very idealistic" boyfriend of two years suggested they go and live in a run-down meeting house by the Whanganui River, with no electricity or running water.

"It never entered my head to do anything else. I felt completely at home and connected to all that."

They rambled up and down the river, painting the kowhaiwhai panels of maraes, clearing cemeteries, working on farms and cutting scrub.

A half-hectare, all-organic, vegetable garden provided their sustenance and it was during this unconventional time that Langbein embraced the idea of using the resources around her.

She preserved fruit on the open fire, baked a potato-based bread daily and even attempted a pavlova in the camp oven, which she described as an "unmitigated disaster".

She recalls her long blonde hair was in plaits to her waist, that she won a potato-picking contest at 17 and how she refused to wear a dress for two years.

This tomboy era might be at odds with the well-groomed appearance of her now very-public persona but it was a formative foundation for her cooking philosophies.

"Having had that experience meant that I could approach food quite differently. There was such an honesty about it. I feel really privileged to have had that opportunity."

Despite gracing the covers of countless magazines and fronting high-profile cooking events, there is a charming unaffectedness about Langbein, which perhaps carries through from her teens.

She had forgotten about our interview and instead of being rattled at appearing sans make-up, cheerfully rustled up coffee and a slice of something delicious as we chatted.

Five minutes in front of a mirror and she was at her photogenic best for the required photos. How did she do it?

"I've learned to be the queen of the quick fix," she says, laughing.

Langbein doesn't cultivate airs and graces, preferring to think of herself as a "home cook" rather than a chef and she takes genuine pleasure in resourcefulness, describing it as "empowering".

Rather than just touting living off the land, or eating what you grow, as catch phrases cooked up to sell books say, she really has done both.

After her river days, she ran off with a "wild possum trapper" and lived with him for two years, near Gisborne.

She soon ran her own trap lines and added live deer recovery from helicopters, cold-smoking eels, crayfish pot-making, hunting and fishing to her life skills repertoire.

"What I caught I cooked, experimenting endlessly in a learning process that drew where it could from what I had seen in my mother's kitchen.

"For the most part, my learning was unfettered by tradition or the rules of any particular school. Some things worked, others failed."

Langbein said she realised much about what was to fulfill her in the years to come, during her early 20s.

"I learned the spirit of resourcefulness and that what matters, is the relationships with people.

"Ask yourself what makes a good life?

"It's not stuff. It's caring about the people around you and taking pleasure in really simple, little things."

She credits her husband Ted with teaching her to take a moment to enjoy a cup of coffee or a walk around their garden - along with infusing her life with "a hell of a lot of fun".

He has supported her "big vision" to promote eating homegrown, home-cooked seasonal food by providing people with easy-to-follow,"bullet-proof" recipes.

"I feel incredibly lucky to have married the man I married."

A diploma in horticulture from Lincoln University in 1981 helped shape the planning for her extensive Wanaka and Auckland gardens and taught her which ingredients go well together according to their plant families.

Strolling among her vegetable beds, deciding what to have for dinner, is one of Langbein's simple pleasures in life.

While she might not decide until evening what the meal will be, she advises shopping with a rough plan in your head of what the following night's menus could include, to avoid doubling up on ingredients or unused food wastage.

Having a well-organised "global pantry at your fingertips" is her key to taking basic ingredients like chicken, mince or potatoes and turning them into something delectable with minimal effort.

Langbein revels in the tweeting age and loves receiving messages from her readers, watchers or recipe devotees - many of whom are following her lead in creating simple, satisfying meals.

"The nicest thing is it's not about me. It's about what they've done in the kitchen.

"It's not about money or time but what they can achieve around the table."