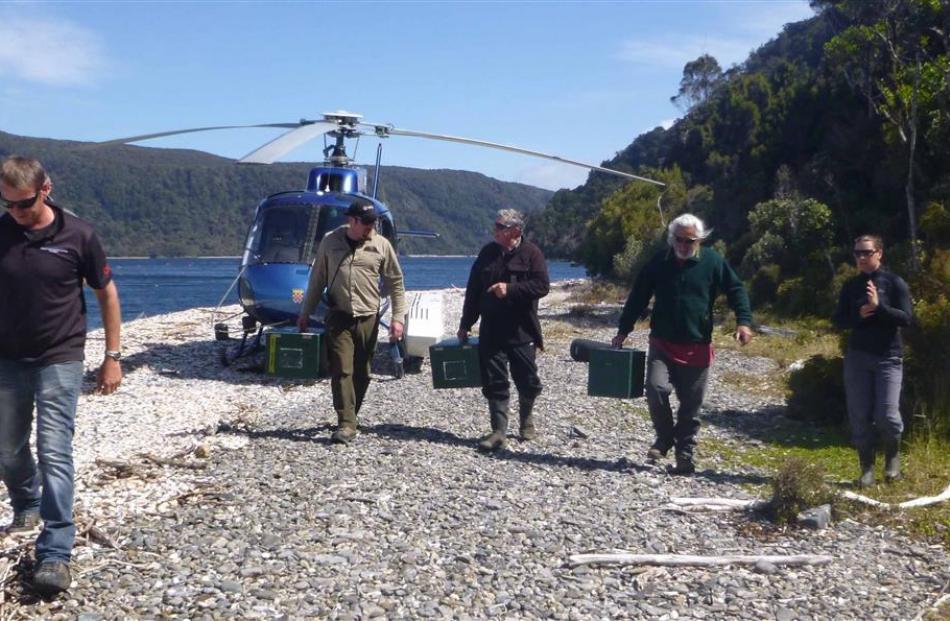 The team unloads the juvenile kiwi, still in their transport boxes. Photos by Kelly Gough. 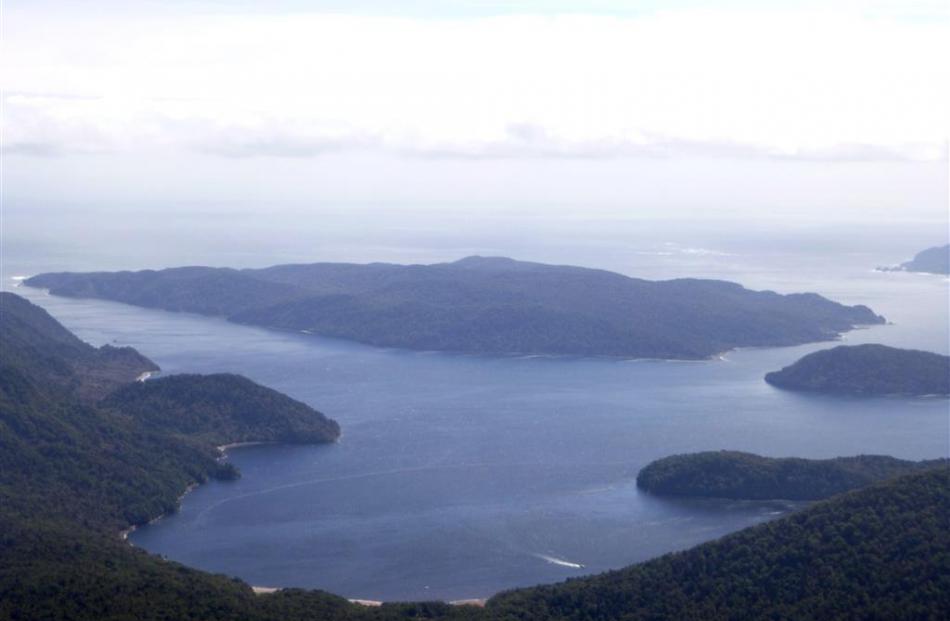 Coal Island, a predator free sanctuary for kiwi at the mouth of Preservation Inlet, from the air. 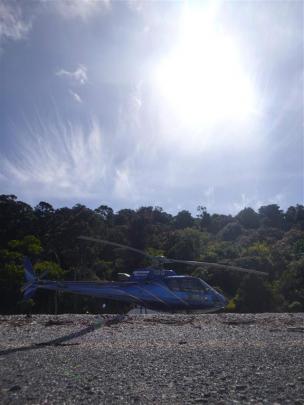 The helicopter touches down on the narrow strip of beach. 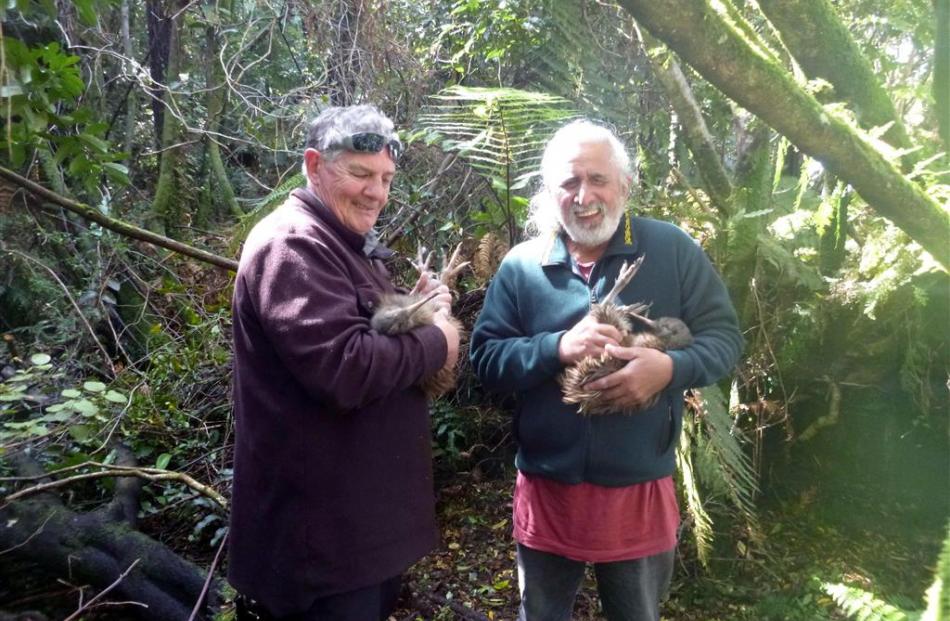 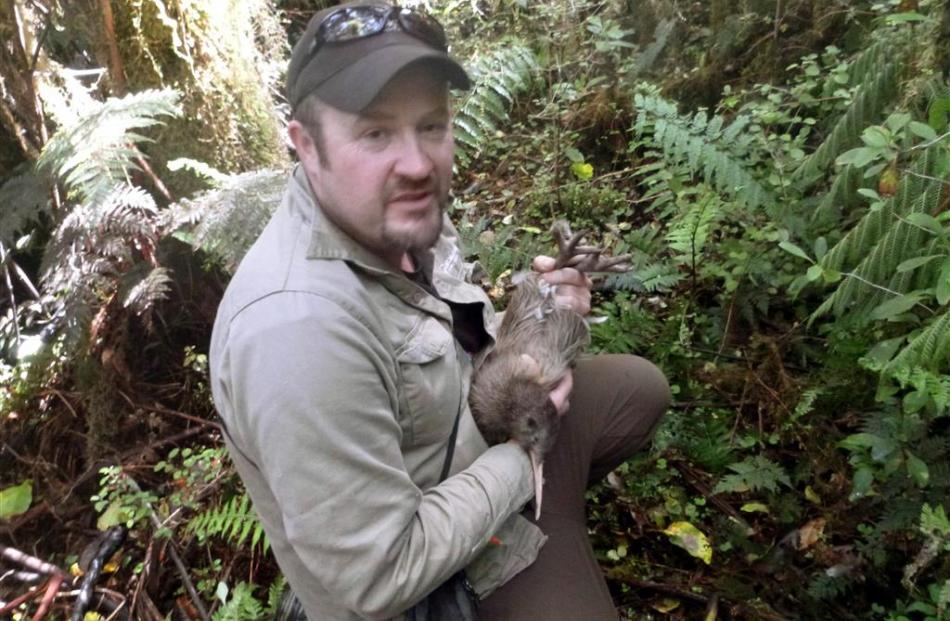 Orokonui Conservation Manager Elton Smith about to release a kiwi into a prepared roost on Coal Island.

Kelly Gough describes the excitement of transferring the first group of juvenile Haast tokoeka from their temporary protected home in Orokonui Ecosanctuary's Kiwi Creche to a life in the wild.

On Wednesday, December 9, 2015, at the bright and early time of 6am, Orokonui staff and members of the Haast Department of Conservation team met in the car park of Orokonui Ecosanctuary to begin catching juvenile kiwi.

It was to be the first official scheduled departure of kiwi from the year-old Orokonui kiwi creche.

Quite an exciting moment, as despite trials and tribulations the work done within the creche had paid off and produced some lovely healthy Haast tokoeka to help boost the numbers of this endangered species.

There were five kiwi to be caught and processed. They all had to be weighed, dosed and have their old transmitters removed before being boxed up for their upcoming journey.

There was tension in the air to begin with, as the birds needed to be caught and ready to get on the road by 11.30am.

In theory that was plenty of time, but kiwi are very good at evasive manoeuvres and a lot faster than a person when running through dense bush.

There was some concern about best-laid plans ... In the end the hunt was very successful and all the birds had been caught with a few hours to spare.

Stage one completed, we were on to stage two, the drive to Orawia High Country Helicopter base to board the helicopter that would fly these young kiwi to their new home, Coal Island.

Located at the extreme southwest of New Zealand, Coal Island lies at the entrance to Preservation Inlet in Fiordland National Park.

At larger than 1100ha, Coal Island still has plenty of room left for kiwi needing a safe residence. While primarily a podocarp/broadleaf forest - like Orokonui Ecosanctuary - Coal Island also has mountain beech and silver beech trees.

It was an incredible ride to Coal Island, traversing by helicopter some of Fiordland's most impressive country. Luck was on our side and the weather was amazing, with clear sunny skies all the way.

Our cameras were kept busy recording the impressive scenery.

The helicopter set down on the northeastern end of Coal Island on a narrow strip between sea and bush. Along its eastern edge Coal Island is not that far from the mainland.

In the past the odd deer and stoat have been known to swim to the island, but there is now a trust managing the island (and other islands close to the mainland) to monitor and protect against these incursions.

The bush edge was very dense, so it was fortunate the Coal Island Trust has built a few tracks. Once you entered the bush though, it did open up a bit and what a beautiful place!

We scouted around for some appropriately dark roost spots to release our birds, since it was still a bit early for them to be getting out and about, and one by one the Haast tokoeka were removed from their boxes and placed on their new island home.

A few didn't appreciate our efforts and quickly scampered away to find a roost spot of their own. Their well-camouflaged little bodies could hardly be seen, but could definitely be heard as they headed inland.

Our mission complete, we loaded our empty transport boxes into the helicopter and then were given a treat in the form of a ‘‘flyby'' around the island by our pilot, one of the island's trustees, as a reward for our efforts. That helicopter ride helped me appreciate the size of the island.

With the job done and it being time to head back inland, or more specifically to head to dinner, as we were pretty hungry by this time, I was grateful to have had the chance to experience Coal Island and to see the creche process through to a wonderful conclusion.

Already these birds' successors are at Orokonui, and hopefully the creche will continue to have more such success in the future.

Kelly Gough is a ranger at Orokonui Ecosanctuary, with particular responsibility for the juvenile kiwi held in the creche.