Playing hide and seek in the undergrowth 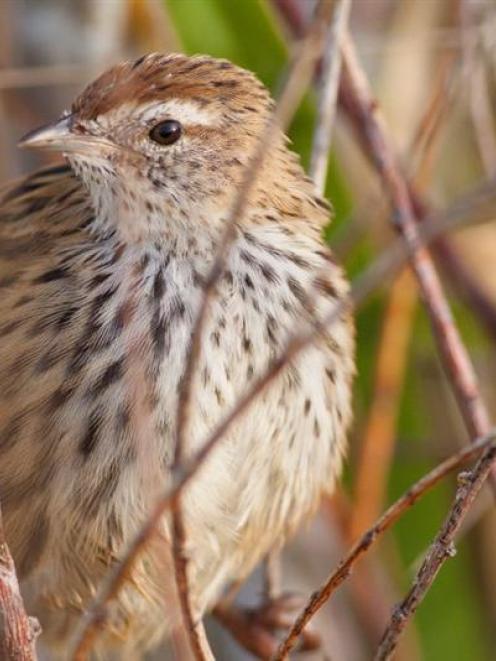 The fernbird (matata). Photo by Paul Sorrell.
On an October afternoon I set off for Orokonui Ecosanctuary in search of one of my favourite birds, the elusive matata (fernbird).

With their flitting movements and skulking habits, these birds present a challenge to the wildlife photographer, and a clear shot of them is something to be proud of. Just another small brown bird when seen from a distance, its speckled chest and chestnut crown are striking features in close-up.

The day is cold and blustery, with scudding cloud and rising winds, and I am not confident of even seeing my quarry, let alone getting any photographs.

Taking the Kaka Track from the visitor centre, and turning right past the big nectar feeder, with its swooping bellbirds and silvereyes, I head along the aptly named Fernbird Track, which loops back to the main trail.

Fernbirds were sighted in this part of the ecosanctuary soon after it was opened. They had not been recorded before the predator fence went in; now they are seen and heard on both sides of the fence. It's what we birdy types call a "hot spot".

I settle myself in a part of the track edged with stakes commemorating donors to the ecosanctuary. The dense gorse and twiggy coprosma shrubs look to be good habitat for fernbirds.

A bellbird calls powerfully from close by, and is answered by a distant call. A yellowhammer stutters from a neighbouring thicket. A harrier hawk, its wings held stiffly in a wide V, patrols the fenceline.

Then I hear something - a plaintive "tchoc" - not the duetting fernbird call often represented as "uu-tick", but enough to put me on the alert.

Scrutinising the scrub just a few feet from where I'm sitting, I can just make out a dark brown shape flicking towards me through the low branches of a dead gorse bush, never fully revealing itself. Then it's gone.

One place where I have had better views of these birds, and even taken a few half-decent photographs, are the Sinclair Wetlands near Berwick on the Taieri Plain. Here, 2000ha of swamplands, with plenty of thick low cover, make an ideal habitat for fernbirds. Bushes and clumps of flax rising above the bog provide perches and look-outs for the birds, as well as opportunities for photographers.

Last April, I spent a happy afternoon there in search of this elusive species. After an hour spent staking out a likely spot, I located one bird, and soon another began calling nearby.

They spent the next hour calling to each other and scrambling through the undergrowth trying (as it seemed) to make contact, without ever actually meeting up. Perhaps it was enough just to be within cooee of each other.

My nature diary takes up the story:

"When on the move, the birds made no attempt at concealment but would bash through the undergrowth with great vigour. This noise and the quivering of grass stems constantly gave away their position. The thought occurred to me that this would be a gift to predators like rats and mustelids. Sometimes there was a series of small explosions in the grass, as if the bird was feeling intense frustration at losing contact with its mate. On one occasion, one bird spent about 10 minutes running noisily through thick grass right in front of me, as if through a maze, at times just centimetres from my feet. Its behaviour reminded me very much of a mouse.

"It was only when they surfaced briefly, to hop up on a twig or flax stem to spy out their position, that I was able even to attempt a shot. Their points of emergence were usually quite unpredictable, and they would often stay in view for only a few seconds before diving back into cover. On several occasions I had the bird lined up in the middle of the frame only to find that it was too close for the shutter to click, even with an extension tube attached!"

I got only one decent shot that day, but it was enough to whet my appetite for these fascinating and beautiful birds.

Now they are inhabiting Orokonui Ecosanctuary, which is becoming a haven for rare and special birds of many kinds.

- Paul Sorrell is a Dunedin wildlife photographer, writer and editor. Wild Ways runs on the first Saturday of the month.