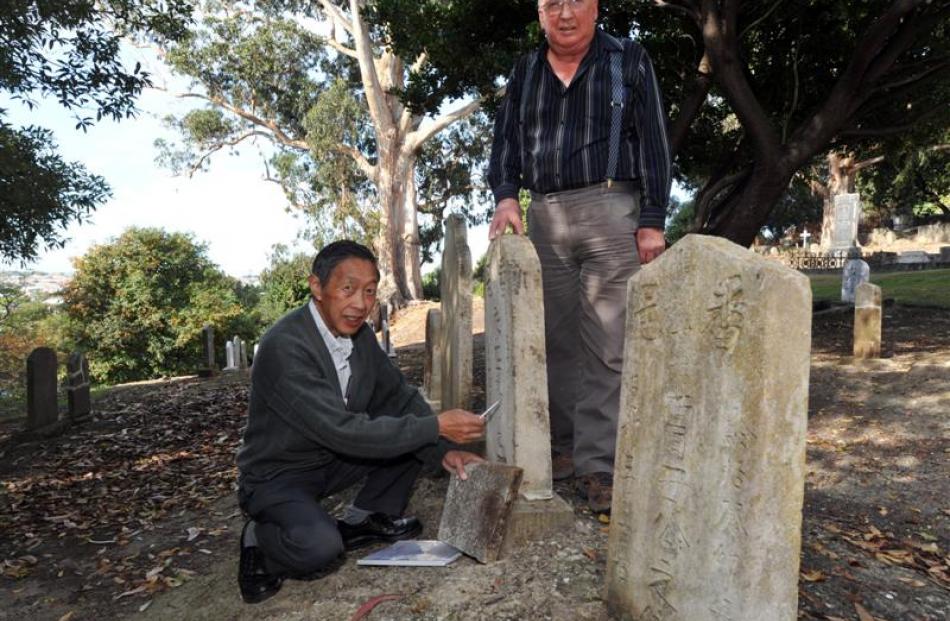 Leslie Wong (left) and Stewart Harvey inspect a restored headstone at the Southern Cemetery. Records show it is the burial site of Yuet Sher Loong, who died in 1903, aged 56. Photo by Gregor Richardson. 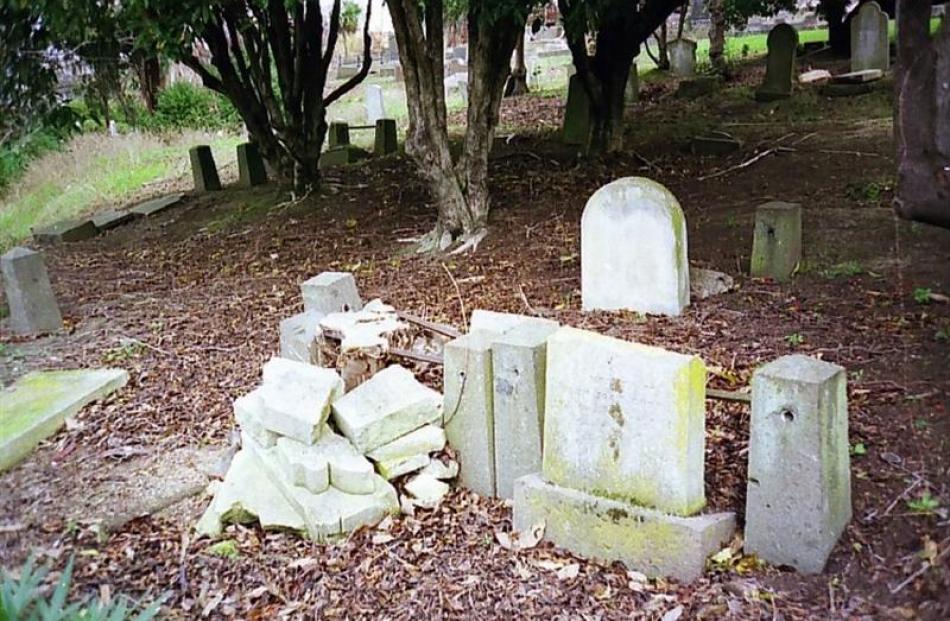 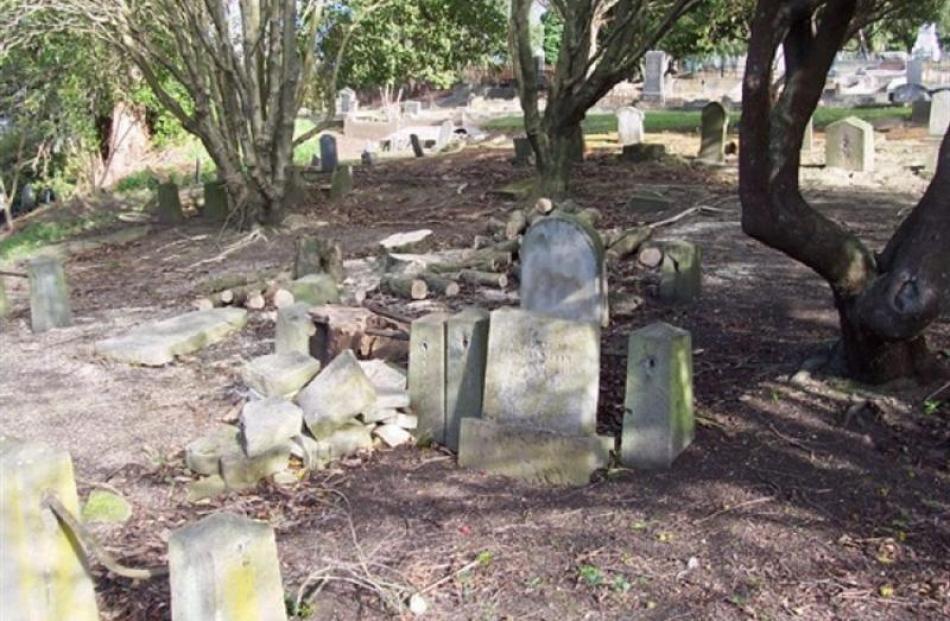 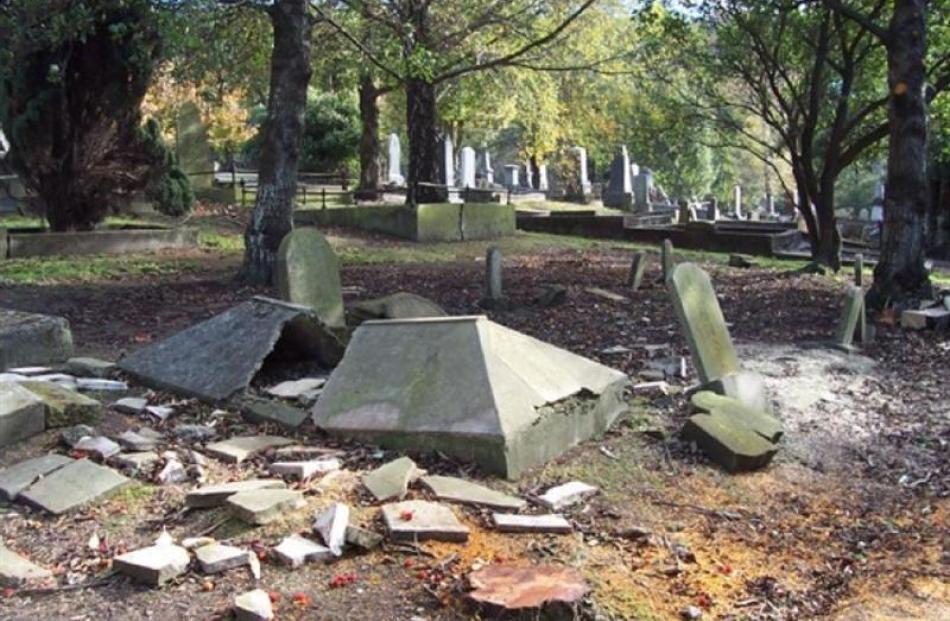 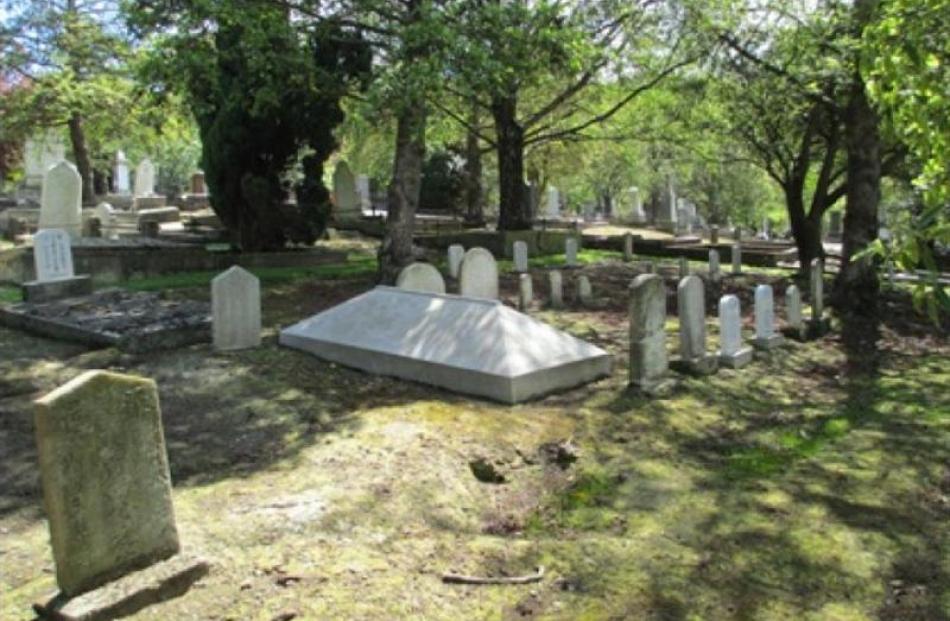 Leslie Wong kneels at a 110-year-old gravestone, clearing away twigs and looking at the faded classical Chinese lettering.

A dedication ceremony for Chinese graves in Dunedin's Southern Cemetery will be held tomorrow and he wants the area to look its best.

The headstones, most of which mark the graves of early Otago gold-seekers, have taken six years to restore. It's the largest historic Chinese grave site in the country.

When he and Historic Cemeteries Conservation Trust chairman Stewart Harvey first visited the cemetery, the task ahead seemed impossible. Vandals had kicked over the headstones and smashed the sarcophaguses.

''It was an absolute bomb site,'' says Mr Wong, a Chinese historian and adviser to the project.

''There were broken pieces of stone scattered everywhere and you couldn't find two pieces to join together to figure out if they were from the same grave.''

While much of the cemetery had been vandalised, the Chinese section suffered the most because the headstones were relatively thin and the distinctive inscriptions made them easy targets.

Some of the Chinese immigrants arriving in New Zealand in the mid-1860s had journeyed from the gold fields of California and Australia, he says. But about 2000 travelled directly from the Pearl River delta on the southern coast of China, an area of civil unrest and poverty.

Few had mining experience and many could not read or write their own language. Already in debt to Chinese moneylenders, they had to pay a poll tax to enter the country - the 100 levy of 1896 equivalent to more than $18,000 in today's money.

Many years later, Prime Minister Helen Clark would formally apologise to descendants and establish the Chinese Poll Tax Heritage Trust with $5 million of government money. Grants of $55,000 from the trust have funded the graves' restoration.

Not all those buried in the Southern Cemetery were gold-seekers, however. Some saw business opportunities and established themselves as merchants. Others were market gardeners, labourers and hawkers. Some ran cook shops and one was listed as a bottle collector. Though not recorded, there are also likely to be some European women who lived with or married Chinese.

The cemetery opened in 1858 and closed in 1980 after 23,000 burials, including at least 200 in the Chinese section. However, when a group led by genealogist Ngaire Ockwell transcribed the Chinese gravestones in the 1980s, they found only 114 identifiable grave sites.

Vandalism was not the only problem, says Mr Harvey, whose trust co-ordinated the restoration. Poor construction, natural decay and land subsidence also took their toll and the trees that the Dunedin City Council planted in the centre of every grave were a ''huge'' problem.

The main challenge after the council had removed some of the overgrown trees was picking through the stone fragments, trying to work out where to start: ''We had to make order out of chaos and that was very difficult.''

While the written transcript proved valuable, the Chinese characters could not simply be copied to new stones. Chinese often use their family name first and their given name last so cemetery records sometimes had their names transposed or incorrectly recorded. And some plots indicated more than one burial.

Some of the missing information was reconstructed by the late Bill Wong, an elder with a wide knowledge of old-style Chinese characters, family names and villages. Mr Wong - whose younger brother George (91), has also helped with the project - did the handwriting for more than 30 of the new stones.

When he died in 2011, the volunteers turned to computer software to complete the rest - using Cantonese, rather than Mandarin, because its tonal sounds are related to English transliterations in early shipping, migration and poll tax records.

To retain the area's historical ambience, broken stones were pinned and glued and only those which were too badly damaged were replaced with new stones made of granite. Now the work is finished, the Chinese site is the most complete section of the cemetery.

Divided according to religious affiliation, the cemetery has separate areas for Presbyterians, Anglicans, Roman Catholics and the Jewish. Most of the burials in the Chinese section took place from the 1880s to the 1920s.

Many of the miners eventually returned to China but those who did not strike it lucky could not afford to go back and some ended their days at the Dunedin Benevolent Society's institution in Caversham.

Two mass exhumations were carried out by the Poon Fah Association, which decided to ship remains to villages in China, Mr Wong says. The first was in 1883. The last shipment, in 1902, was lost when the steamer SS Ventnor sank off the Hokianga coast.

Sending the dead back to ancestral soil was considered important for spiritual salvation but in his view those left behind were more fortunate: ''Here they are remembered 140 years after they died as a permanent part of New Zealand's history. If their bones had gone back to China and been buried, industrialisation would have bulldozed the whole lot over.''

Cemeteries are steeped in history and in some cases, are the only record of who lived in a district, Mr Harvey says. But damage is a widespread problem and the $300,000 the trust has spent restoring graves in Dunedin has ''hardly scratched the surface''.

''There's a huge amount to do yet but it all takes money.''

One who knows the magnitude of the task is Mr Wong, who together with wife Maisie, restored 48 Chinese gravestones at the Andersons Bay Cemetery. The couple took broken stones home, where they cemented, pinned and glued them together and re-lettered them using a dental drill. The work began in 1996 and took six years.

''The significant thing about this restoration,'' he says, looking around the Southern Cemetery, ''is that two generations away in China, when scholars become more English-fluent, they'll come here using English as their search tool to find the early history of those who left China.''

The Dunedin man says vandalism is ''just a part of life'' and he is relieved the restored headstones will survive at least another generation.

''The Chinese were a part of the early fabric of Dunedin and Otago. This is the only Chinese cemetery of this magnitude in New Zealand so ... it's something well worth preserving.''

Be there
Dunedin Mayor Dave Cull will perform a dedication at 2pm today, which in Chinese tradition is Ching Ming Day or ''tomb-sweeping day'', the day to visit ancestors' graves and leave flowers or nuts. Because roads in the cemetery are narrow, members of the public should drive through the main (South Rd) entrance, drop off passengers, then exit through the Eglinton Rd entrance and park in Eglinton Rd.