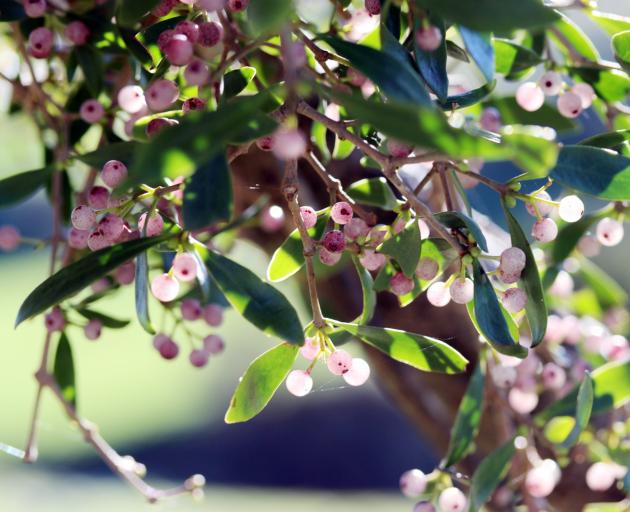 Tupeia fruits are white with purple markings. Germination requires birds to remove their fruit flesh and disperse the seed on to an eligible host. Photos: Zoe Lunniss
Orokonui Ecosanctuary is home to many nationally threatened species, and now Zoe Lunniss is undertaking the task of establishing a highly endangered and rare mistletoe to help save it from the brink of extinction, writes Jeanne Hutchison.

Traditionally, mistletoe is associated with Christmas. During the UK's bleak winters, parasitic mistletoes offered decorative foliage on the branches of their bare deciduous hosts, bringing a bit of flair to an otherwise dreary season and maybe inspiring some spontaneous kissing. 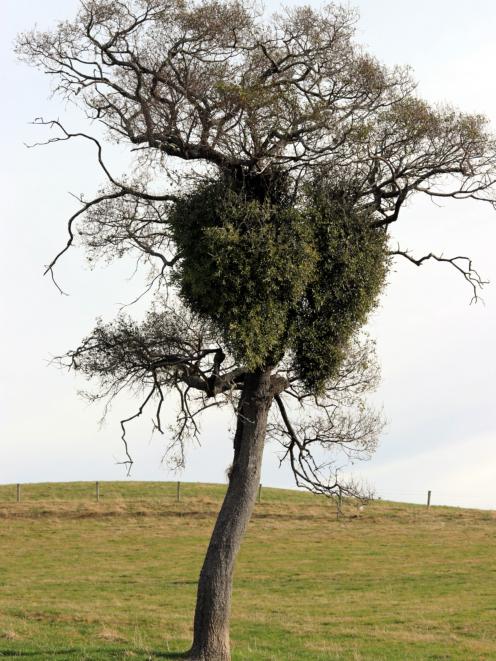 The distinctive horsetail growth form of Tupeia on a ribbonwood host on farmland at Goodwood.
University of Otago botany student Zoe Lunniss has been researching Tupeia antarctica for her master's thesis and has found very little information about the most favourable habitat to assist her with its re-establishment.

Being a monotypic genus it has no close relatives with which it might be compared. As native bush has declined, populations of Tupeia antarctica have become fragmented. Remnants are mostly found on forest margins where they are at risk of being eaten by rats and possums, and on farmland with the additional threat of stock rubbing against the host tree. Another concern is that there are not many juvenile plants, suggesting that recruitment is infrequent in the surviving populations.

There are small pockets of Tupeia in Southland, Otago, Christchurch, Kaikoura, Marlborough, Nelson, Taupo and Rotorua, where they exhibit regional specificity, varying between locations in preferred hosts and leaf shape. The Tupeia found at Pukawa Bay, on the southern shores of Lake Taupo only grow on pittosporums, whereas in the Catlins they are found on ribbonwood (Plagianthus regius). At their only known refuge near Dunedin, Tavora Reserve, there are suitable pittosporum hosts but here they are only found on hoheria and ribbonwood.

The seeds for Zoe's experiment came from mature Tupeia at Tavora Reserve, near Goodwood. Orokonui is a suitable option to attempt to establish a population, as it is predator free and has plenty of resident bellbirds, one of Tupeia's key dispersal species. Orokonui has limited hoheria and ribbonwood, so Zoe decided to place them on marbleleaf (Carpodetus serratus) as there is an abundance of marbleleaf in the sanctuary and it is a known host of Tupeia in the town belt. There Tupeia is found on about 20 marbleleaf trees, but is struggling to grow more than a couple of leaves. Zoe has put possum barriers around the trees to see if their dormant state is due to low light conditions or because the grazing pressure is so strong in the town belt. 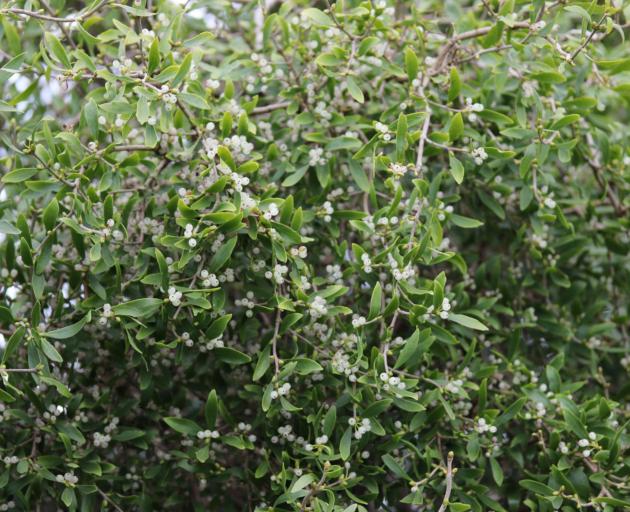 Tupeia antarctica is a hemisparasite as it photosynthesizes to create it's own food but requires nutrients and water from its host.
Zoe has used seven host trees at Orokonui to bear 54 seeds. She squeezed the seeds out of their skin to mimic the seeds passing through a bellbird or silver eye's gut and smeared the sticky seed on to a 10mm diameter, or thinner, branch and secured them with string. She has repeated this process at Dunedin Botanic Garden, using marbleleaf, pittosporum and ribbonwood hosts, and at Tavora Reserve, placing 170 seeds in all.

Zoe monitors the progression of the seed germination every two weeks. After five months most of the seeds have germinated. The host responds by swelling at the site where the mistletoe root has penetrated the branch's epidermal layer. Mistletoes are regarded as hemiparasites, because they photosythesize, but acquire key nutrients and water from their host, with their specialised root structure called an haustoria, common to most parasitic plants.

Tupeia is dioecious, having separate female and male plants, requiring at least two plants (one of each sex) to reproduce. The flowers of Tupeia are inconspicuous. Green buds develop into simple generalist flowers with a little nectar pad. Male and female flowers look very much alike except for the minute anthers and stigma. 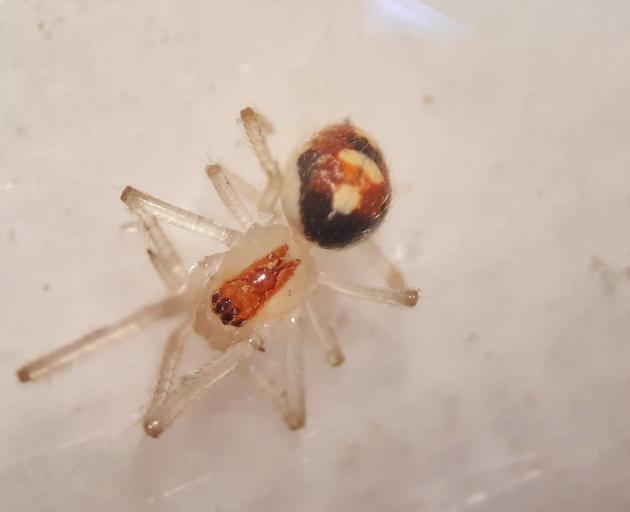 Nicknamed King Crimson: an undescribed tangle web spider discovered by Zoe and James during invertebrate observations of Tupeia.
Tupeia at the Tavora Reserve started flowering at the beginning of September and will continue to flower for about a month. Zoe has spent many hours at night observing the invertebrate diversity associated with Tupeia, and with the help of fellow botany master's student, James Crofts-Bennett, is trying to unravel the mystery of what pollinates it.

They have observed an endangered mistletoe moth that lays its eggs in a crevice on the leaves of Tupeia and then spins the leaves together. (Their caterpillars are hatching at the moment). To be confident that they've caught the pollinator in the act, they need to catch an insect on a female flower that has male pollen on it.

To date Zoe has observed and collected many invertebrate specimens associated with the plant, including a new spider species and a rare moth, and James has done the amazing job of identifying them. Tupeia is known as an ecological keystone resource as it supports a huge diversity of invertebrates.

"They are an awesome environment for all kinds of insects you usually don't get," Zoe says.

Zoe would like to change the perception of mistletoes being a pest that kill their host trees, in the hope that people will stop removing them.

Her seed experiment at Orokonui aspires to learn more about this mistletoe, so it doesn't share the fate of another New Zealand mistletoe, Trilepidea adamsii, which was last recorded in 1954 and is now considered extinct.

Zoe Lunniss is a master's student at the University of Otago Department of Botany.

Jeanne Hutchison is a volunteer and guide at Orokonui Ecosanctuary.