A spectacular eclipse of the moon

The eclipse of the moon should be a stunning sight even to the naked eye, writes Ian Griffin.

As dawn breaks on Saturday, along with colleagues from Otago Museum and the University of Canterbury, I will be standing atop Mt John in the Mackenzie Basin.

We will be equipped with an array of telescopes, and all of them will be pointing at the moon as it descends towards the Southern Alps. Weather permitting, we will be enjoying awe-inspiring views of what promises to be an absolutely spectacular total lunar eclipse.

During a lunar eclipse, Earth passes between the full moon and the sun, and, over the course of several hours, our planet's shadow falls upon and darkens the moon's surface.

During the darkest part of the eclipse (called totality by astronomers), all direct sunlight is cut off, and the moon's normally bright white disc turns a deep-red colour. Once totality is over, Earth's shadow slowly leaves the moon's surface, and after a few hours the moon returns to its normal lustre. 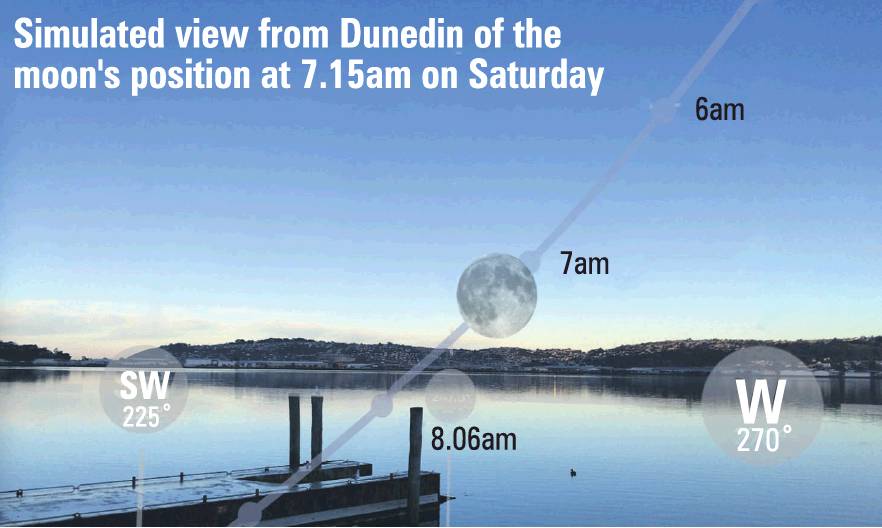 The eclipse starts at 5.14am, when the lighter part of Earth's shadow (the penumbra) touches the moon. The penumbra is usually pretty difficult to see, so it probably won't be until 6.24am when the darkest part of Earth's shadow (the umbra) first falls upon the moon, then moon-watchers will notice a dark ''bite'' out of the top right part of the moon.

Over the next hour, more and more of the moon's surface will grow dim, until 7.30am, when the entire moon will be dark, and the total phase of the eclipse will begin.

Unfortunately for stargazers in Aotearoa, when totality begins, the moon will be very low in the western sky (it sets just after 8am), and with sunrise at 8.02am, the sky will also be getting fairly bright.

The combination of low moon and brightening sky will make observing the eclipse quite a challenge, but, if you have a camera you should be able to get some amazing pictures as the moon approaches the horizon.

Do try to observe the eclipse; it should be a stunning sight even to the naked eye. Do let me know if you see it!