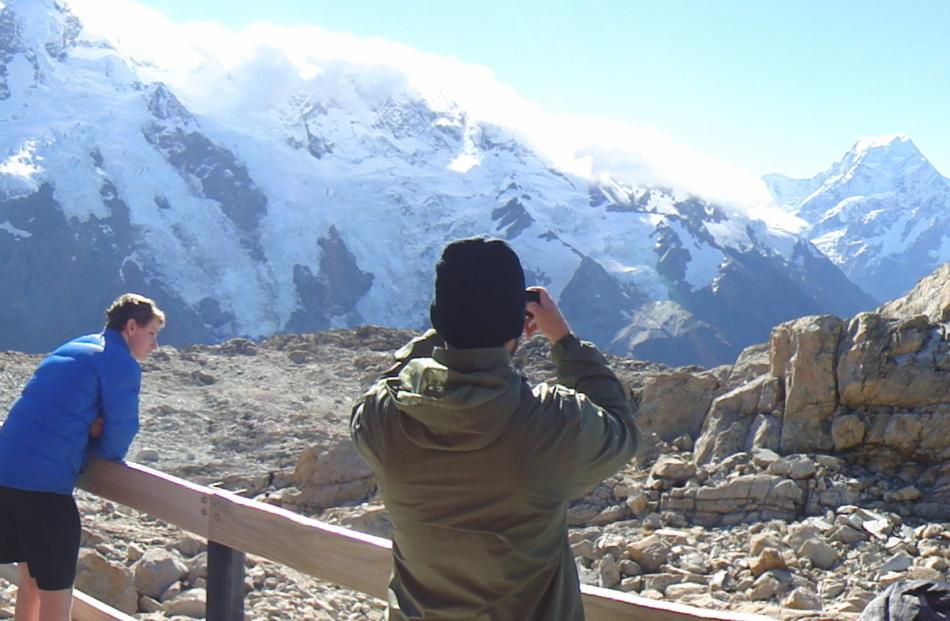 The view from the balcony of the Mueller Hut takes in a wide sweep of mountain peaks, including Aoraki Mt Cook. Photos: Tom McKinlay 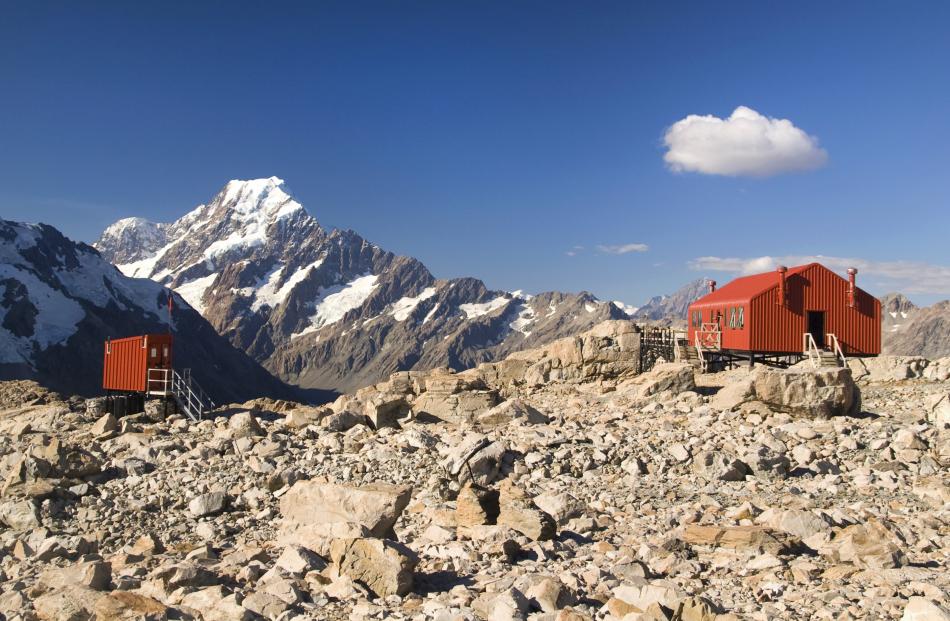 Mueller Hut is a Meccano fantasy with matching detatched toilet. 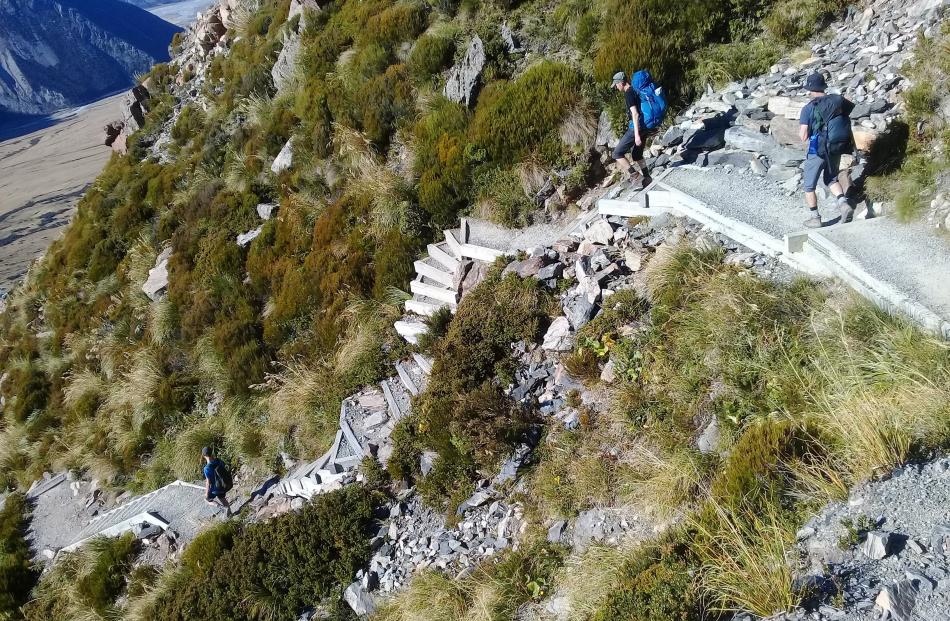 The rise, tread and going of the Mueller Hut Route steps is spot on.

The Mueller Hut Route is a step up, writes Tom McKinlay.

It was a cracker of a day as we stood in the Hooker Valley at the foot of the Mueller Hut Route, light packs behind us, the hill in front of us, and blue overhead. We four were my brother and my two sons; the best company imaginable.

It was early, so we were feeling virtuous already and set off up the stairs.

Yes, stairs. For you are ushered up to the alpine Mueller Hut via a staircase of engineering excellence, the rise, tread and going of each step a sliderule masterpiece, calculated to provide an optimum stride. The steps do so while following each twist and contour better than a Dr Seuss illustration. That is rare enough indoors, let alone in the great outdoors. Witness the jumbled hopelessness of the steps just below the summit of Mt Cargill, designed perfectly for a three-legged man.

The Mueller steps need to be good, because there are plenty of them. The precise number has never been divulged (this might not be true), lest it discourage, but someone had written a number on a riser about halfway up. It said something like 5000, but I suspect that was a guess. Graffiti rarely quotes a source.

We’d had several breaks by this stage. Not because we needed them, you understand, but because the view was changing so dramatically as we climbed, the Hooker below, Aoraki above. We also had a lot of scroggin to get through.

About halfway to the hut the stairs run out, having delivered walkers, thighs burning, to the Sealy Tarns. There’s a long picnic table next to a tarn, which turned out to be a particularly unprepossessing pond of water. Its eutrophic appearance didn’t deter a group of young internationals from dipping, which might just go to show that if you tell people it’s all pure for long enough, they’ll overlook the evidence of their own senses.

We lightened our load by another several kilograms of scroggin and resumed our ascent. Beyond the stairs, the way becomes a scramble up dirt track, through tussock and scrub, over rocks and, eventually, up the marble cascade of a scree slope. This is the bit where you put the hammer down and show the boys that greying temples and receding hairlines mean not a thing in the mountains. There was no indication they were in any way impressed.

Maximum serenity.
Once on the skyline ridge at the top, you’re pretty much home and hosed. The Department of Conservation website says you can now "relax and enjoy the magnificent view of the Mueller Glacier sweeping down the valley past smaller hanging glaciers and the stunning ice shelf on Mount Sefton". I agree.

Mueller Hut itself sits at 1800m like a Meccano fantasy among moonscape rock and snow a little way further on. There’s a balcony running around its two most vistalicious sides, which is all the entertainment you need. Gathered there at all times between mid November and late April is a full set of United Nations representatives, proof that when words fail, some experiences still translate perfectly; the crack of the avalanches tumbling down Sefton, sun and cloud conspiring to hide and highlight crag and face.

Just behind the hut is a peak said to be the first a certain young Edmund Hillary climbed. So we scrambled up there, quick smart; stopping only for a game of limited overs cricket on a small patch of snow. The ball was only lost down a crevice once, and not for long. The view down over the Hermitage from Ed’s peak was cool, no question. You could see why someone might have caught the bug.

That night in the hut’s common room we did find folks who spoke our language, including a father and daughter from Newfoundland, whose ancestors had followed the Rev Norman McLeod there from Scotland during the 19th century diaspora. Mine followed the same reverend all the way to Waipu. It’s a small world. It was also a literate crowd: I wasn’t the only one reading Sapiens, but the only one doing so in English.

At the next long table in the common room, a large group of people speaking (I’m guessing) an Asian language ate a banquet of a thousand courses. There’s always someone in a Doc hut with a better dinner than you, but it was a fine demonstration of what can be achieved on a gas hob.

A night next to a fidgety walrus with sinus issues in a communal bunkroom is all the encouragement anyone needs to get an early start. There are alternative sleeping arrangements available: several rock windbreaks have been carefully constructed around cleared ground for tents both under the hut and nearby. But wherever you’re dossing, an early start is rewarded more richly up in the hills than anywhere. The sun turned Aoraki slowly red and pink, then gold. The perfect visual accompaniment to a bowl of porridge.

Mueller Hut doesn’t really afford the opportunity to get away from it all. At times the track resembles George St on Christmas Eve, but there’s a very good reason for the crowds. It’s lovely and big enough to make even quite a large gathering of gawkers feel it was entirely worth the effort. We stayed just the one night. You could very happily stay longer.

• Bookings are required for Mueller Hut from mid November to April 30. It can fill up quickly.

• The track is 5.2km long and rises about 1000m. It’s doable as a day tramp, but an overnighter can reward with a spectacular sunrise.