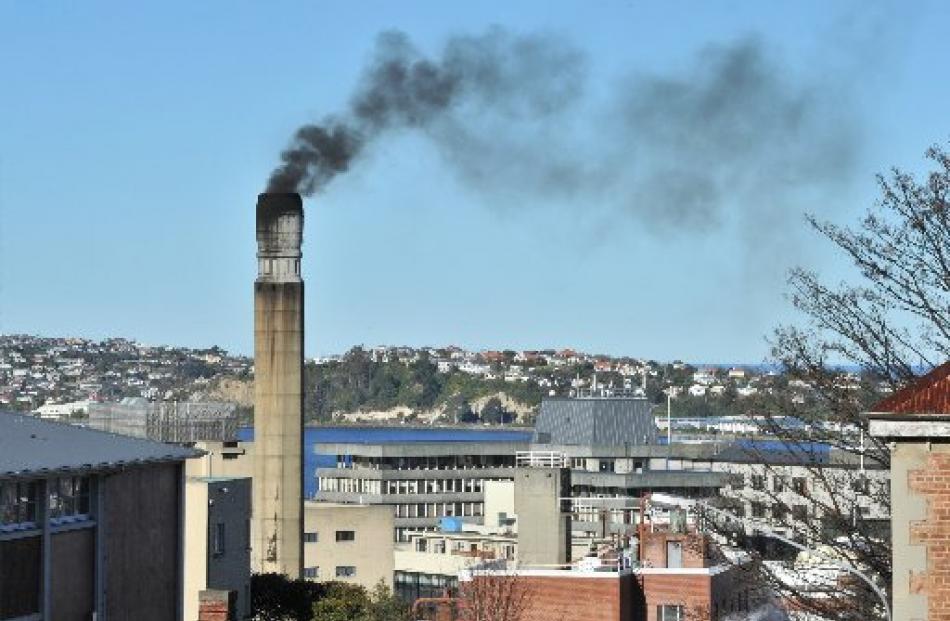 Smoke belches from the Speight's chimney before the recent installation of a new gas boiler.

Physicists tell us that potential energy is motion waiting to happen, while kinetic energy is the energy of motion.

A proposed new plan hopes to capture both of these.

The Dunedin Energy Plan is an arrow being drawn back against the archer's bow string.

It will not be released until later this year. But how far it will fly, in which direction, and to what effect will be determined by forces already being exerted on it.

An energy plan is vital for every city, the chairwoman of the Dunedin City Council (DCC) community resilience forum believes.

''Energy is the basis of everything we do,'' Cr MacTavish says.

''Our energy supply represents our ability to 'do work' as a city. It underpins our economy, it supports our social fabric.''

But until now the city has not taken a strategic approach to its energy use, she says.

Only 23% of the city's electricity needs were generated locally and $325 million from petrol and diesel sales flowed out of the city each year, he said.

Also driving the strategy is a government call to halve 1990 greenhouse gas emissions and increase renewable electricity production to 90%, both by 2025.

Dunedin is already taking steps in these directions.

Landfill gas is generating electricity, forestry by-product biomass boilers are being installed, insulation and clean heating programmes are improving residential energy efficiency, cycling is being promoted, and a transport strategy with a focus on low-carbon transport is being developed.

But a more strategic and wholesale approach is needed, Mr Cull says.

Dunedin's economy is ''not buoyant'' and a low-carbon future is approaching, he says.

''We need to take advantage of opportunities to save money and create jobs.

''We need to ride the wave of change or be drowned by it.''

He points to a global low-carbon goods and services market that is expected to be worth NZ$3.8 trillion by 2050, the 55% increase in green services and products Copenhagen exported in the five years to 2009, and the estimated 14,000 new jobs added to London's economy through carbon-reduction initiatives.

To get enough Dunedin organisations, businesses and individuals on the wave will be a key challenge in realising that potential.

Community buy-in has been instrumental in the 30-year transformation of Freiburg, Germany, to a thriving city of green zones, bikes, solar energy research and decreasing CO2 emissions (see sidebar story).

By contrast, the lack of community-wide engagement with Waikato Regional Council's 2009 energy strategy has been identified as an important reason why its implementation has faltered.

No doubt adding to the complexity of successfully launching Dunedin's energy plan was the fact it was predicated on acknowledging two sometimes controversial topics - anthropogenic climate change and the foreseeable end of fossil fuels.

It is hard to get buy-in from people who do not believe that what you are selling exists.

And the people who need most convincing are average citizens, Assoc Prof Bob Lloyd says. Climate change now has wide acceptance at government level, and peak oil was accepted in 2006 by the International Energy Agency, Prof Lloyd, who is director of energy studies at the University of Otago, says.

''The problem is that both of those issues go against large numbers of vested interests, namely the fossil fuel lobby, who have been lobbying against those issues and putting a reasonable amount of money in to it.''

As a result, despite 97% of all published scientific papers since 1991 agreeing humans are warming the planet, ''the public is still confused'', Prof Lloyd says.

In fact one study conducted in the United States last year showed only 45% of those polled believed there was scientific consensus on human-induced climate change.

Then along came Barack.

Early last Wednesday, New Zealand time, just hours before the official launch of the Dunedin Energy Plan discussion paper, US President Obama stood in front of a student audience and made the most forthright comments on climate change of any US president.

Described as ''an historic step'' and the ''best speech on climate by any president'', Mr Obama outlined a comprehensive US strategy for dealing with climate change.

''I refuse to condemn your generation and future generations to a planet that's beyond fixing,'' he said.

What a politician had to say should not have made so much difference. The scientists had already spoken.

And initiatives were already under way in corners of the US, such as Portland, Oregon. Portland has had a clean energy policy since 1979, and introduced that country's first carbon reduction strategy in 1993.

But when you are one of the most powerful leaders in the world, it does make a difference.

It was serendipitous timing for proponents of Dunedin's energy plan - another force being exerted on that archer's bow.

''Climate change is accepted by pretty much all the major countries including, now, the US,'' Prof Lloyd says.

If Mr Obama's speech marks the ''mainstreaming'' of climate change and clean energy issues - if scientists, politicians and the public will now increasingly all be singing from roughly the same song sheet - what implications does that have for how Dunedin should formulate its energy strategy?

Otago Chamber of Commerce president Peter McIntyre supports discussing an energy plan but is concerned to know how radical the strategy will be.

''How far will they [city council] take this?'' Mr McIntyre says.

Did greater energy security mean building new energy generation capacity or did it simply mean ensuring businesses were prepared for a natural disaster that could interrupt energy supply? he asks.

"But where are these jobs going to come from and how?"

There is concern among chamber members that the plan could include a local carbon charge, he says.

''The last thing many businesses need right now is unnecessary new rules that make it harder for them to contribute to the Dunedin economy.''

Business as usual ''is not an option'', Dr Janet Stephenson says.

The director of the University of Otago's Centre for Sustainability believes there are ''huge economic and social benefits to be had from transitioning to low-carbon energy systems; and the earlier this is undertaken the better''.

Dunedin, as a comparatively small city with a compact urban area, is well placed to develop an energy strategy that would enable it to make that transition, Dr Stephenson says.

''Energy efficiency is the number one area - with all of the co-benefits that this produces such as warmer, drier homes, healthier people, better workplaces, and cost savings for businesses,'' she says.

''The second area is transport, which is almost entirely dependent on fossil fuels currently, and a crucial area for New Zealand to address if we are to meet our emissions reduction targets.

''Because of its relatively compact urban form, Dunedin has great opportunities to improve active transport, such as walking and cycling, as well as public transport.''

Prof Lloyd says it is impossible to know what future Dunedin should be preparing itself for through its energy strategy.

Peak oil means peak economy, a concept which economists are slow to grasp, he says.

Because the physical evidence points to a long-term global decline in economic growth it will be increasingly difficult to implement solutions.

Dunedin has the added burden of large city council debt.

Prof Lloyd believes Dunedin needs to become as self-contained as possible in energy and food production and water supply.

But exactly how and when is hard to pick, he says.

''I think a scenario approach is best. Look at the best option and the worst option, and then keep your options open to follow whichever one eventuates.

''If you put all your money on a collapse scenario and it doesn't happen you both look foolish and could have changed things irreversibly.

"If you bet on business as usual and it goes wrong, once again you've done your dough.

''You have to look at the spectrum of things that might happen, try to assign probabilities or risks, and then try to chart a way forward.''

Consensus, it seems, is still a wee way off.

But, as Mr McIntyre says, this is the time to raise the issues and ask all the questions.

''I don't think anyone needs to be upset by these questions being raised, because it is going through a submission phase.''

- The plan discussion paper is available on the Dunedin City Council website at www.dunedin.govt.nz/whats-on/energy-plan.
- It is being circulated for feedback until July 26.
- Public consultation on the draft energy plan will be for one month from August 9.
- The city council is scheduled to endorse the finalised energy plan on October 7.