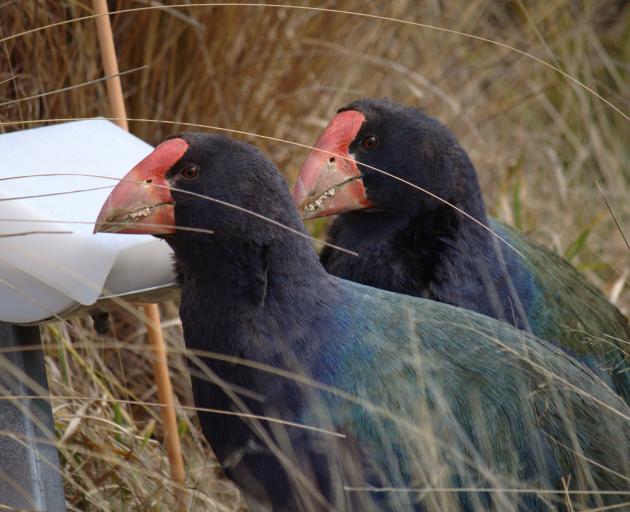 Tumanako and partner Bendigo on the supplementary feeder at Burwood. Photo: Eeva-Katri Kumpula
Orokonui volunteer Eeva-Katri Kumpula has recently been volunteering at the Burwood Takahe Centre, and has this update on the Orokonui takahe offspring who have previously left the sanctuary and gone on to help in the recovery programme.

Spring is in the air, and with it takahe from the coldest reaches of Fiordland to not-so-freezing Waitati to tropical Hauraki Gulf are preparing to get busy. Breeding season has started. Takahe couples are looking their best in their most iridescent blues and greens, territories are determined and fiercely defended, and much secrecy surrounds their nest locations.

The resident takahe pair at Orokonui, Paku and Quammen, have already had their first nesting attempt for this season. Unfortunately, the first eggs were not fertile, but they are now sitting on a fertile foster egg from Fiordland. We hope to have good news about that in a couple of weeks. Paku obviously loves mothering chicks, and between them the pair have successfully raised four already.

Like many endangered species, takahe suffer from relative lack of genetic variation, and sometimes this causes problems with fertility. The Doc Takahe Recovery Team spends a lot of time trying to predict good breeding pairings, and the results of nesting attempts are followed closely. Unfortunately, sometimes pairs need to be split up and reorganised, if they are not successfully producing chicks. Another pairing may lead to better results. Every chick counts, as each one is needed to add to the slowly growing population. This is the year when the takahe population officially passed 400 - for the first time in a couple of hundred years, give or take.

This is why it has been so fantastic that Orokonui has been able to contribute to the recovery efforts. The ecosanctuary has been a safe place for chicks to be raised, and other birds have stayed there temporarily. "Learning to takahe" inside the safety of the predator-proof fence has helped Orokonui-raised birds to go on to teach others. Mihiwaka, the male chick from the 2017-18 season, first learned bush skills at Orokonui with Paku and Quammen, then went to Burwood to join two other juvenile males in learning to survive in Fiordland conditions from two experienced adult takahe there. The birds there know how to burrow into snow and stay all snuggly and warm underneath in winter, and how to find food and water in those conditions. So after this learning period he is now proudly representing the Orokonui takahe whanau among the wild takahe population in the rugged Murchison Mountains.

The first takahe to hatch at Orokonui, Kotahi, is still living at Burwood Takahe Centre in Fiordland. He and partner Weydon have successfully hatched three chicks already in previous breeding seasons. They now have two juvenile helpers (yearling birds), Emerald and Te Raukawa, helping them this season. Takahe collaborate in "child care" within these family units that may consist of birds that are not actual blood relations. The juvenile helpers can take their turns to sit on eggs to keep them toasty warm, freeing parents to go to get a feed, and they also help feed the new chicks. This is very beneficial for the species and chick survival, as the juveniles learn life skills and parenting for the future from the adult pair, and the new chicks have more beaks to feed them. Sometimes the helpers are actually feeding the chicks more diligently than the parents.

Luckily takahe are not too particuar about whose eggs they sit on, so there are opportunities for swapping eggs from nest to nest as needed. Paku and Quammen have already raised three foster chicks at Orokonui, where fertile eggs were brought from Fiordland nests for them to incubate and care for. The Fiordland pairs then lay another clutch, and the numbers of chicks produced can be increased.

The male Orokonui foster chick from 2016-17, Wheko, is happily living with his long-time partner Jenkins up in Burwood in Fiordland. They have already produced one chick together, this past season. And now they are preparing for the breeding season with juvenile helpers Rough and Wera. Wheko's sister Tumanako and her partner Bendigo don't currently have juveniles with them, but fingers crossed for chicks there too. In the meantime, back in their childhood home Orokonui, their foster parents, Paku and Quammen, are busy trying to produce new offspring of their own. If all goes well, perhaps one day those chicks will be juvenile helpers for one of the now adult ex-Orokonui birds!

If you would like to support the conservation work done at Orokonui, you can find the donation details on the Orokonui website orokonui.nz/Support/Donations.

To contribute to their conservation, you can sponsor a takahe on the Doc Takahe Recovery website https://www.doc.govt.nz/our-work/takahe-recovery-programme/get-involved/...

Eeva-Katri Kumpula is a keen volunteer at many of New Zealand's ecosanctuaries, and is particularly attached to takahe.