Takahe together at last 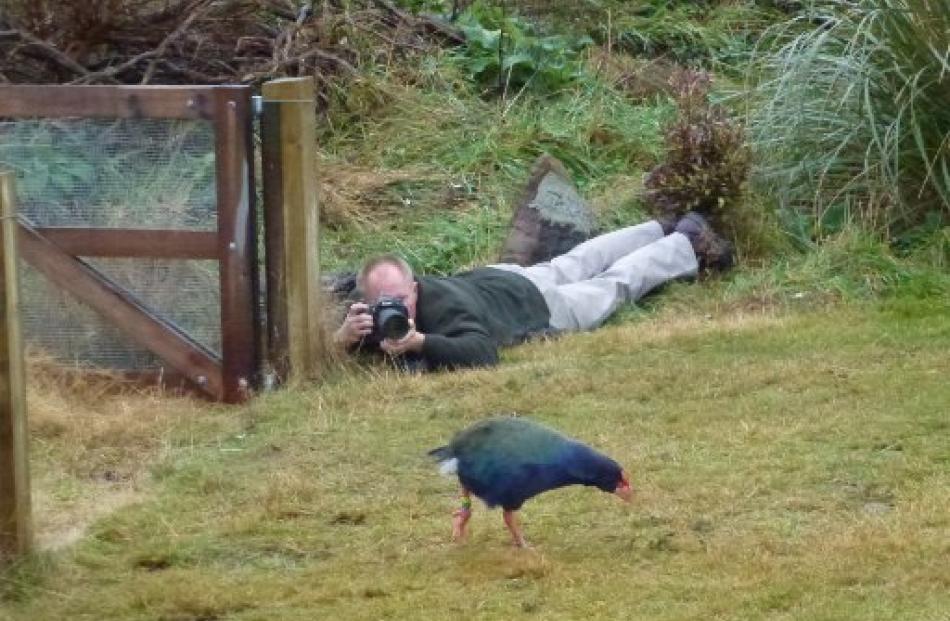 'Otago Daily Times' illustrations editor Stephen Jaquiery gets a close-up of Paku as she gets her first taste of freedom at Orokonui Ecosanctuary. 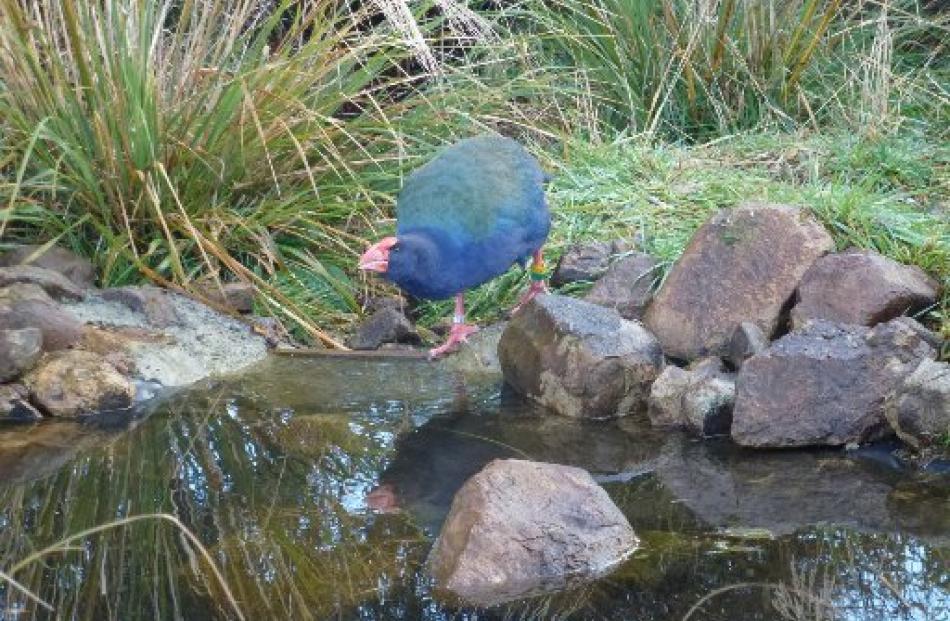 Quammen takes a drink from the bush-backed pond near the takahe feeding spot. 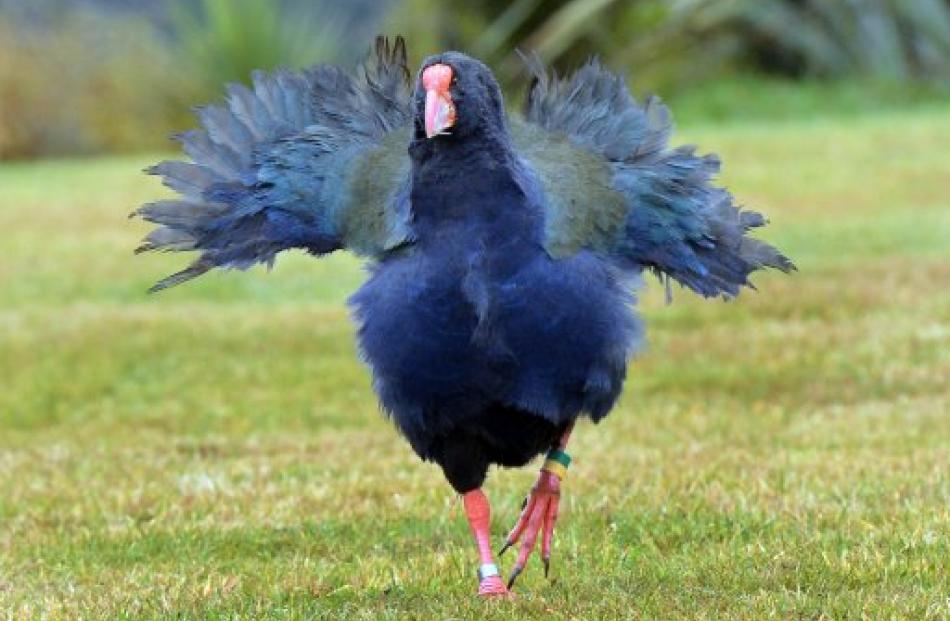 They strolled out of their enclosure at 11am one cold grey day last month as if they owned the place - Quammen, the formerly lonesome and largely unseen takahe, and his new lady friend, Paku, fresh from Kapiti Island.

They'd had three weeks to get to know each other before the release. Now they had more than 300ha of predator-free valley to explore.

Not even the prone figure of Otago Daily Times illustrations editor Stephen Jaquiery lying next to the open gate with camera poised could deter them from their red-carpet moment - hungry takahe with the food hopper strategically placed 10m beyond the gate.

In turn, with Quammen going first, they walked steadily towards the food container, which was perched on a low post.

Using their huge scarlet bills, they separately nosed open the lid to get to the yummy pellets, a special concoction made by Massey University veterinarians for captive takahe.

Quammen is named for American nature writer David Quammen (The Song of the Dodo and other books) and Paku is Maori, meaning something small.

Actually, she is heavier than Quammen at 3kg - heavier at this early stage of her Orokonui experience, and more wary. Quammen has had the measure of Orokonui Ecosanctuary for some time, having chosen to base himself near the gate at the bottom of the valley, 2.5km from the visitor centre.

Last year, an aggressive rival, another male called Hoiere, made life a misery for Quammen, who chose a kind of exile as the best way to manage the bullying.

Hoiere was also hidden away most of the time, a poor ambassador, so that when he died unexpectedly of septicaemia last year, the Department of Conservation decided to try to find a mate for Quammen.

Paku was the result, and she and Quammen seem to have taken a shine to each other - the first night after their release they were back among the tussocks of the enclosure!

Orokonui's rangers often see the two birds engaged in mutual preening, and if they've been browsing separately for a time, they will rush up to each other and bump breasts.

At 11 o'clock every morning, they are fed at the hopper by staff or volunteers. Orokonui is not a zoo and the birds do have the run of the sanctuary, but as a rule they are waiting for their tucker at 11am beside the pond close to the Tane Mahuta carving.

Typically, they will drink from the pond after eating and sometimes take a dip in it to freshen up for the day.

They are turning into model advocates for their species, whose plight is causing some concern.

When rediscovered in Fiordland's remote Murchison Mountains in 1948, there were only about 250 left. Today, the population is no greater despite decades of effort to protect them and increase reproduction.

Population health is now measured by the number of breeding pairs, and recovery efforts continue through both wild (Murchison Mountains, 20 to 25 pairs) and secure populations.

The latter include predator-fenced sanctuaries such as Orokonui and predator-free islands.

Survival in the wild is the focus, nonetheless, provided suitable safe habitat can be found.

In the past 12 months, the population at secure sites has gone from 37 breeding pairs to a predicted 61 by the end of this month - good news for the species.

Juveniles and non-breeding adults make up the rest of the national population.

The recovery programme, managed by the Department of Conservation, faces many challenges, not the least the prospect that the smaller populations around the country are at risk of inbreeding and loss of genetic strength.

To offset this risk, birds reaching breeding age are moved around.

Infertility is another issue.

Quammen and Paku have a poor breeding record. They may try to breed at Orokonui, but the eggs are unlikely to be fertile.

Still, takahe live to a good age (about 20 years) and they can raise two or three chicks in a season.

Orokonui Ecosanctuary is hoping its two takahe love birds, becoming much admired by visitors, will strut their stuff for a long time to come and that others will join them in a few years.

Neville Peat is a writer and trustee of Orokonui Ecosanctuary. Wild Ways appears in the Magazine section on the first Saturday of the month.