Time to bid farewell to Mars and Matariki 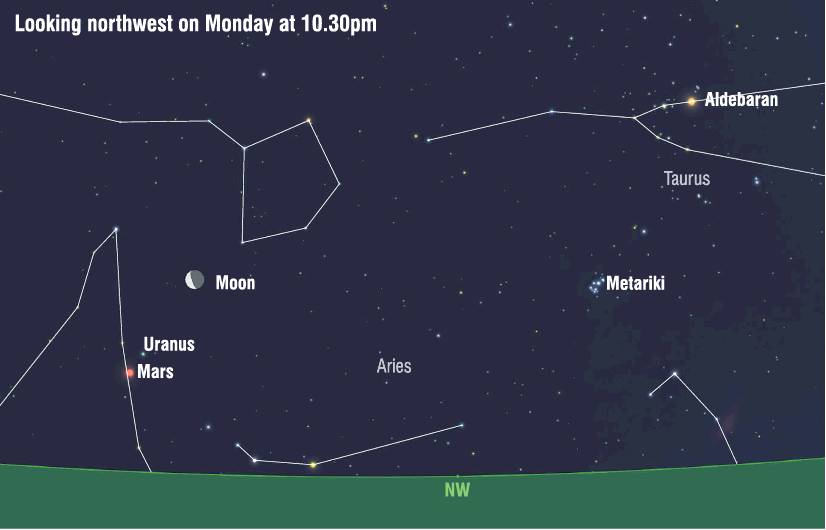 Time's running out for stargazers to see Mars and Matariki, writes Ian Griffin.

I hope you enjoyed last week's fine display of three planets and the moon before dawn; I certainly got some memorable views from the Mount John Observatory in the early hours of Sunday morning.

This week, instead of getting up early, I hope I can entice you to head out at the other end of the day and bid a fond farewell to two familiar objects before they wander too close to the sun in the sky and become hard to observe.

For more than a year, Mars has put on a stunning show. Indeed, from early July until September, the red planet was visible all night and appeared brighter than Jupiter (normally the second-brightest planet and fourth-brightest object in the sky after the sun, moon and Venus). At its brightest, Mars was nearly twice as bright as Jupiter, with many casual stargazers being impressed by its fiery hue.

Over the past six months, as the distance between Earth and Mars has grown, Mars has faded. However, it is still visible in the evening sky, and, as the only bright planet on show, it is certainly worth making the effort to see it before it disappears into sunset's bright glow later this year.

Another object soon to be absorbed into the glow of sunset is Matariki, known as the Pleiades to Western astronomers. This distinctive cluster of stars is visible low in the northern sky from late June until March.

The waxing crescent moon will be close to Mars after sunset on Monday. As our chart (drawn for 10.30pm) shows, at that time the moon will be roughly 10 degrees above the northwestern horizon. Mars will be lower in the sky and to the left of the moon. You will need an unobstructed horizon to see the planet, but it is still bright enough to be easily visible as the sky darkens.

Matariki should also be easy to see; it's roughly the same altitude as the moon above the horizon, so the best way to find it is to scan your eyes to the right. Happy hunting!