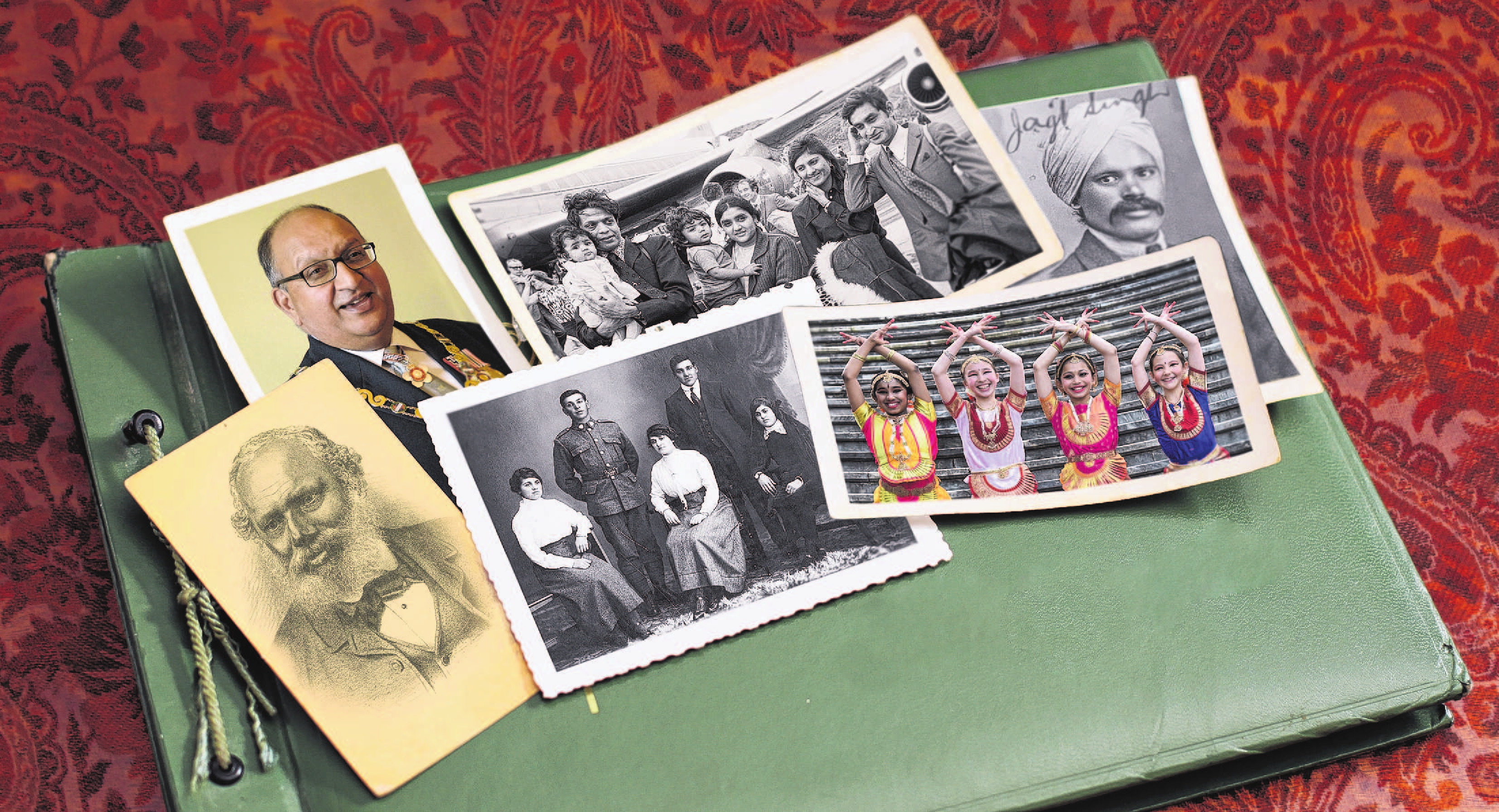 It is difficult to believe that this was, that this is, New Zealand.

In December, 1925, the White New Zealand League held its first meeting in the South Auckland market gardening town of Pukekohe.

Within a couple of years, the league, whose stated aim was to "Keep New Zealand White", had spread to Auckland and Wellington and had support in other centres, including Christchurch.

"We cannot have them [as] members of our social institutions, nor can they have a place in our homes as friends or guests," the league told the government when lobbying for Asian immigration to be curtailed and for Asians living in New Zealand to be prevented from buying land and shops. 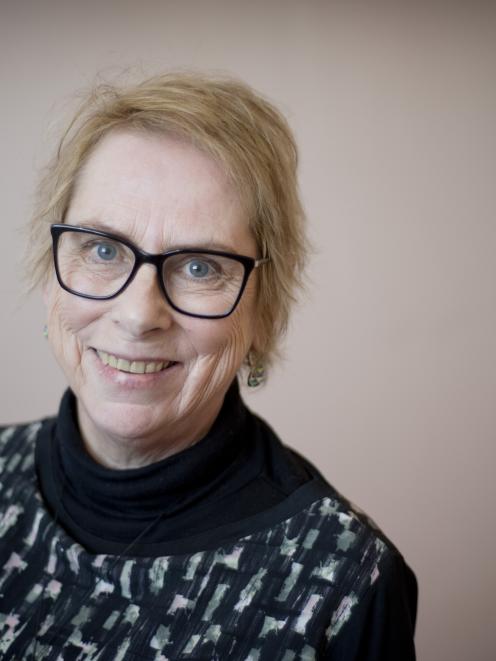 But that same year, the town’s newspaper The Franklin Times, fearing the league’s warnings of an "Asiatic invasion", claimed "the serious danger with which civilisation is threatened ... is from those dark-skinned races which have long ago put on a thin veneer of semi-civilisation but ... are really constitutionally incapable of rising any higher. No better example of this class of people can be found than the Hindus".

"The only workable remedy," the newspaper shockingly opined, was to authorise each local government area to "fix a quota of Asiatics that might be permitted to reside within its boundaries".

"There can be no possible excuse for permitting these people to ruin some of the most attractive neighbourhoods we have, and it is a villainous injustice to the residents that they should be allowed to invade the vicinity of their homes."

The league, its supporters and their attitudes are documented in historian Jacqueline Leckie’s new book, Invisible: New Zealand’s history of excluding Kiwi-Indians, which uncovers the often unhappy story of Indians in Aotearoa. Their experience is also a lens providing a disturbing revelation of racist sentiment in New Zealand, past and present.

Invisible grew out of a sense of angry indignation, Assoc Prof Leckie says.

"It is a response to the outrage I have long held about our history of discrimination towards Asians, specifically Indians," Prof Leckie says.

During the 1970s, studying at the University of Otago, Prof Leckie was an undergraduate student of eminent Sikh history specialist, the late Prof Hew McLeod.

"I admit, I was also fascinated by the music, culture and food of India," Prof Leckie says of her attraction to what became her life’s work.

Her PhD thesis was on the history of India’s Gujarati immigrants in New Zealand. She lectured at the University of the South Pacific, in Fiji, which has a large Indian population, and then in Kenya, which has its own branch of the Indian diaspora. During 27 years at the University of Otago anthropology department — five years as its head — she made several trips to India and, in 2005, wrote a history of Indian settlement in New Zealand. 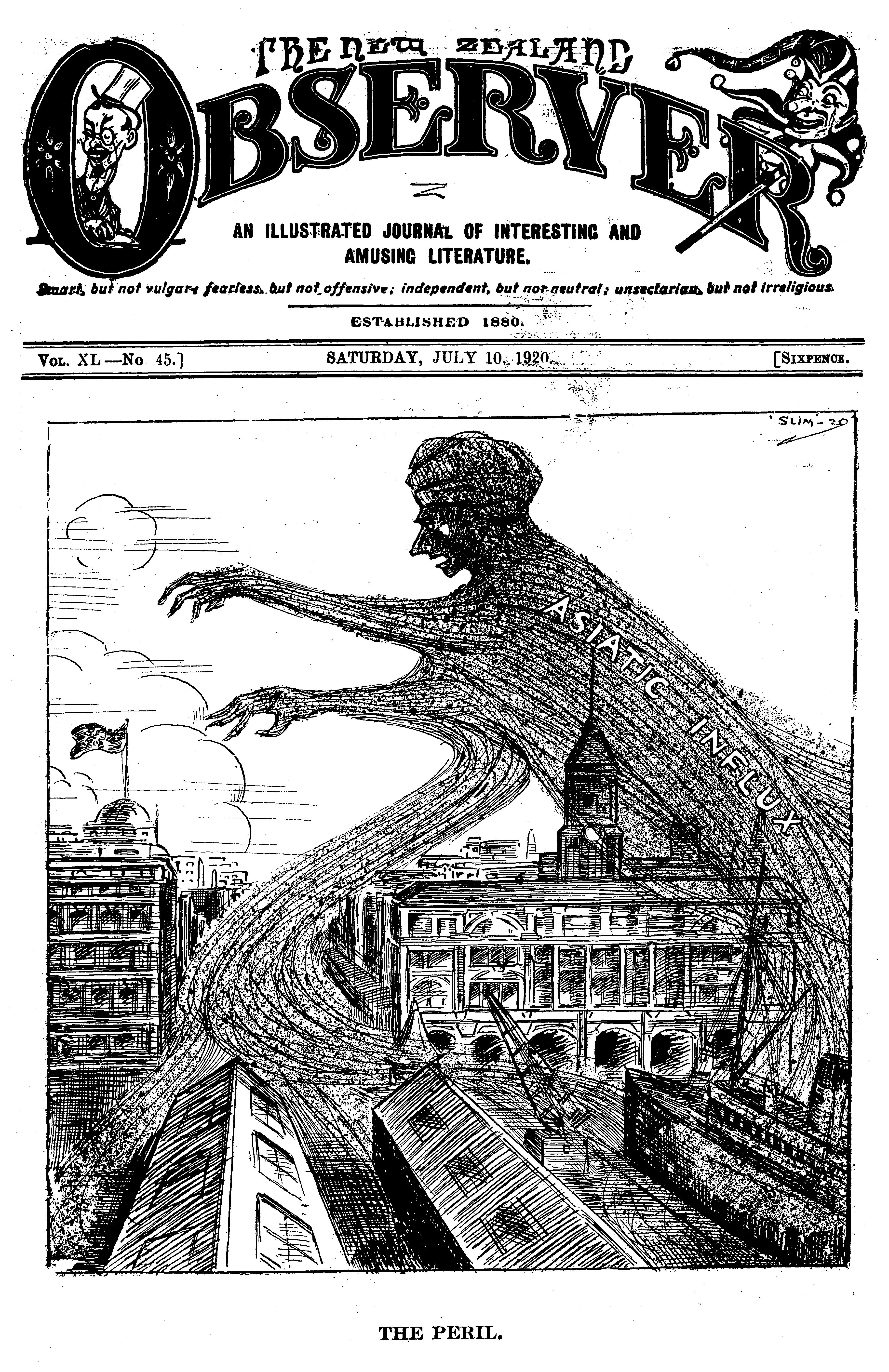 This July, 1920 edition of the New Zealand Observer raised fears about the influx of Asians that did not reflect the numbers — in 1921 there were only 671 Indians living in New Zealand. IMAGE: NEW ZEALAND OBSERVER
Prof Leckie is now connected to the Stout Centre for New Zealand Studies, at the University of Victoria Wellington, and to the University of Newcastle, Australia.

It added to what she knew, building a picture of exclusion that has rendered Kiwi-Indians invisible in the dominant narratives of New Zealand.

"Unlike existing publications on Indians in New Zealand, this is not a history of celebration or integration," she says.

"Aotearoa New Zealand’s record of the exclusion of Kiwi-Indians is a legacy that challenges the nation’s view of itself as inclusive and open."

The history of Indians in New Zealand starts much earlier than most Kiwis realise.

Quoting fellow Indian studies academic Dr Todd Nachowitz, Prof Leckie says Indians are "equally entitled to claim their place in the history of first encounter and the exploration and settlement of New Zealand".

The earliest known Indian visitors to New Zealand were 14-year-old Mamouth Cassem (probably Mahmud Qasim), of Puducherry, in southeast India, and a 16-year-old Bengali named Nasrin. They were lascars, Indian seamen, aboard Saint Jean-Baptiste when Jean-Francois-Marie de Surville berthed in the Hokianga. It was 1769. Captain James Cook was sailing around New Zealand at the same time, on his first trip here.

In 1814, six Indian sailors jumped ship in the South Island. The three who survived are believed to have settled near Whareakeake, between Long Beach and Aramoana, Dunedin. One, who went by the name Te Anu, was reported, in 1844, to be living with his Maori wife and son on Rakiura/Stewart Island.

Another significant connection Indians have with the early history of New Zealand is the discovery of gold in Otago. But this fact — still not widely known — was not formally marked until a plaque to Edward Peters was erected at Glenore, northwest of Milton, in 2009.

Although Gabriel Read is the name most often associated with the 1861 Otago gold rush, Edward Peters, known as Black Peter, discovered gold in the Tuapeka area in 1857. 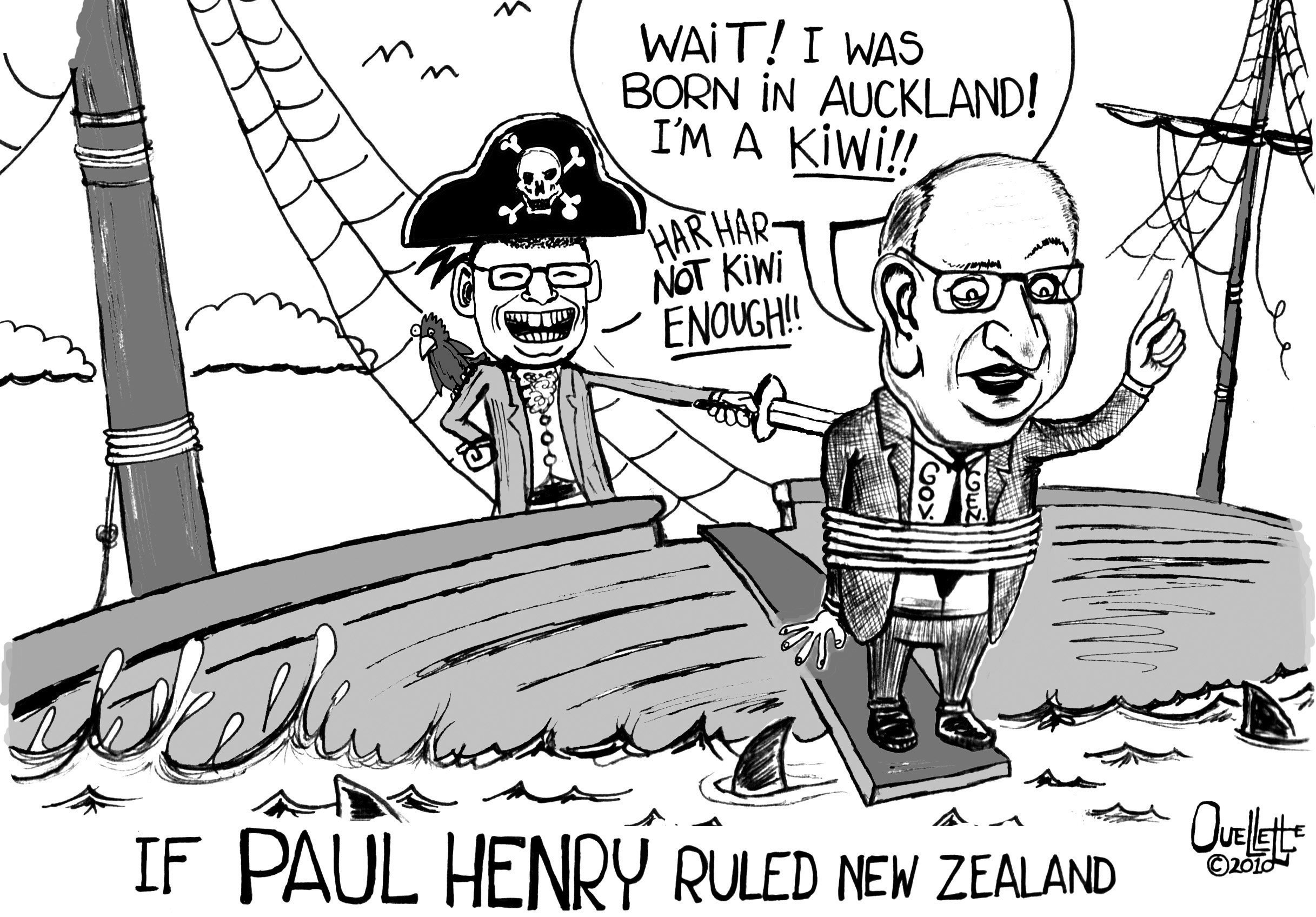 This 2010 cartoon highlights racist comments by television personality Paul Henry about then Governor-General Anand Satyanand. IMAGE: EDWIN OUELLETTE
Peters was a Eurasian from near Goa, in southwest India. He twice claimed the provincial government bonus for discovering a workable gold field, but the £1000 was given to Read. Peters died a pauper, in Dunedin. Fittingly, the memorial to Peters acknowledging his role, 116 years after his death, was unveiled by Governor-General Anand Satyanand, whose forbears had come to New Zealand from India via Fiji.

Prof Leckie’s book reveals a New Zealand more explicitly racist than many of its citizens know or care to acknowledge.

The White New Zealand League, when it set up shop in 1925, merely reignited what was a long-standing, racist streak running through New Zealand history.

Many New Zealanders, Prof Leckie says, have smugly held up the nation’s immigration policy as less racist than that of Australia, which overtly introduced a White Australia policy in 1901.

"But if we delve into New Zealand’s immigration history we find ... immigration restrictions have been the most persistent form of institutional discrimination towards Indians in Aotearoa."

"By 1920 ... the curtain fell, excluding almost all Indian immigration to Aotearoa, except where family relationships with Kiwi-Indians already existed," Prof Leckie explains.

The implicit aim was a white New Zealand. That policy continued for generations.

On the surface, there was no such policy. When, for example, Prime Minister Peter Fraser was asked during his 1948 visit to Ceylon, now Sri Lanka, whether the immigration system discriminated against Indians, he replied that no white policy on Australian lines operated in New Zealand.

But unofficially, it was explicitly so. Prof Leckie quotes a confidential 1953 government memo: "Our immigration is based firmly on the principle that we are and intend to remain a country of European development. It is inevitably discriminatory against Asians — indeed against all people who are not wholly of European race and colour. Whereas we have done much to encourage immigration from Europe, we do everything to discourage it from Asia."

The 1920 Act remained the basis of Indian immigration to New Zealand until 1987.

Prof Leckie agrees her book is a readable, fascinating but disturbing expose.

"A history of inequality and racism that ranges from overt actions and hurtful discourse against Kiwi-Indians to systemic and institutionalised racism, along with the microaggressions that are so often normalised in everyday life."

She also admits it would be a "gloomy and dark book" if it only recorded xenophobia.

There are, scattered throughout Invisible, stories that speak to the resilience and agency of Kiwi-Indians and to the colour-blindness and humanity of other citizens.

There is the account of Jagt Singh, a trooper with the New Zealand Mounted Rifles, who was decorated with three medals for bravery during the Dardanelles Campaign. He and a handful of other Indians fought for New Zealand during World War 1 despite the army generally barring Indians from military service unless they could prove a British bloodline.

Then there was Motiram Vallabh who, when trying to go to the movies in Pukekohe in 1933, was once refused a dress-circle ticket and twice shifted to the front row despite being seated in non-reserved seating. On the fourth occasion, when he was forcibly removed for not shifting, he took the matter to court and won back his entrance fee plus damages and costs.

There was also Mr Falconer, from the Dunedin Seamen’s Rest, who at Christmas in 1912 hosted a tour of the city for 21 lascars working on a cargo tanker berthed at Port Chalmers. He did that despite later being reviled by the New Zealand Truth for "crawling to n******". Dunedin should also "hide its head in shame over this disgraceful episode", the tabloid claimed.

And there was the retired Pakeha church worker who in 1949, wanting to protest housing discrimination against non-whites, advertised her Dominion Rd, Auckland, house for sale with the added condition, "No European need apply".

Despite the bright moments, Prof Leckie says the tenor of Invisible could not help being predominantly a mix of sombre and shocking. Because we need to know our past. Because exclusion and racism is still part of Kiwi-Indians’ lived experience. 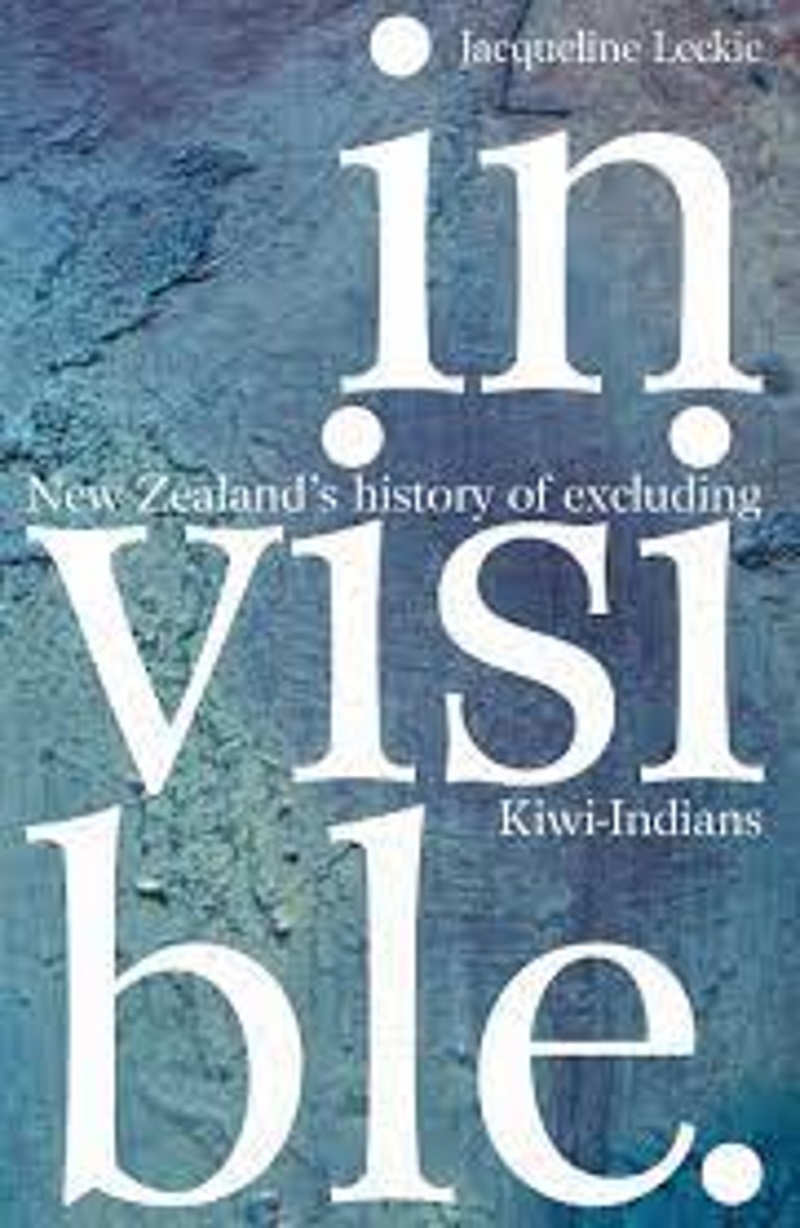 A clanging new millennium example, from 2010, was television personality Paul Henry’s question to Prime Minister John Key, about Sir Satyanand’s replacement as Governor-General, demanding, "Are you going to choose a New Zealander who looks and sounds like a New Zealander this time?"

Henry was defended by TVNZ, then suspended, before he resigned. He did apologise.

Prof Leckie says there are now more legal protections and more avenues for complaint but that casual and covert racism remains a problem.

"I have been surprised by the persistence of really nasty attacks and remarks — even after the March 15 Christchurch mosque attacks and Prime Minister Jacinda Ardern’s words about empathy."

In January last year, the Otago Daily Times reported how boys in a Dunedin park had taunted a Muslim girl, calling her a "stinky Indian", poking her with sticks, threatening her with a fake gun and rubbing her face with dog faeces.

"I would like readers to be more aware of ... our complicated racist past — but also how Indian people challenged or endured this — and to face how racism against Indians in Aotearoa is still very much an issue today."