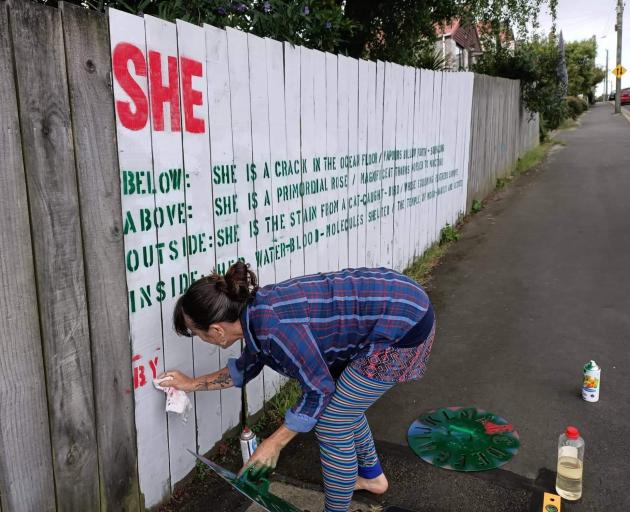 Iona Winter puts the finishing touches on her poem ‘‘Her’’ on a Port Chalmers fence. PHOTO: SUPPLIED
The new poetry editor of the Weekend Poem plans to champion the diverse, she tells Tom McKinlay.

You may know Iona Winter’s poetry without knowing you do.

A poem of hers is spray painted on a fence in Port Chalmers — at the invitation of the fence owner.

"Lots of people get to read a poem when they are walking past out there at port, which is really cool," Winter says.

As the incoming poetry editor for the Otago Daily Times, Winter’s job will be to shepherd others’ words out into the public eye, on page two of The Weekend Mix. She takes over from Diane Brown who has filled the role these past several years.

Winter hopes to champion the diverse, the memorable, the nuanced and meaningful.

As far as her own work goes, Winter rates the fence poem She, outside The Anteroom gallery, as a highlight among a long list of writing achievements.

It is full of imagery from the natural world and indeed Winter says nature is a unifying principle in her work.

"I think for me a connection with nature is intrinsic with being a human on this planet.

"We can’t live without nature," she says.

"I see how disconnected we have become over time with our natural environment and feel quite deeply the impact of what we have done to Papatuanuku."

This is not unconnected with her sense of whakapapa and whanaungatanga; Winter is Waitaha, with connections to both Moeraki, her hau kainga, and Karitane. But it is not just that.

"You could equally say it is whakapapa Celtic, you know," she says with more than a little mischief.

"Most Celtic ancestors from Ireland and Scotland were very connected to the whenua."

Winter employs both English and Maori in her writing, her toikupu, so is very much open to that.

"There are times, definitely, when a kupu Maori would say so much more than a kupu Pakeha," she says.

She’s not fluent in te reo, she says, noting her grandfather was, but since moving south to Otepoti she has made a conscious effort to think about the Kai Tahu dialect.

"It’s like a reclaiming of something that has been lost, which was certainly the case in my ancestry.

"That’s important to me to be as authentic as I can, particularly around what I don’t know. Also this is the whenua where I live so I want whatever kupu I use to reflect me."

But, Winter is also keen not to be pigeonholed.

"I see myself as a ..." She pauses for thought and releases a great whakaha. "A hybrid," she concludes, with laughter. It’s a description she extends to cover her output, that stretches across poetry, short fiction and essays.

Winter, who has a master’s in creative writing, has published three collections of writing and was an International Cities of Literature guest reader at the Edinburgh International Book Festival in 2016.

Among other highlights are one that hasn’t happened yet, the Verb Writer’s Residency with Katherine Mansfield House, in Wellington, scheduled for next month.

"Which is fantastic," she says, because no doubt it is.

She has a project and some project materials already lined up.

In choosing poems for The Weekend Mix, Winter says she’ll be looking for writing that stays with her after reading.

"Something I want to return to and read again. Something that is multi-layered, is rich with meaning and nuance and creative use of language. I am really interested in experimental poetry because, you know, we can all follow a formula, can’t we. But I don’t know if that necessarily makes for good creative work, in that I think work should keep evolving. I think how we write should keep evolving.

And she hopes to encourage a few younger voices.

"We can stay stuck in our adult land, but I think young people have a voice that needs to be heard particularly with what is happening in the world now. The world they have inherited. I think it would be quite powerful to have some young people sending in their work."

Don’t be shy about tackling the big issues, the hard issues, she says.

Winter herself has never been afraid to.

"We can all write a nice poem about a kitten, that’s true," she says, laughing.

So, has she written one herself? "No," she says, accompanying the admission with gales of laughter.

Winter has a couple of pointers for writers, drawn from her own experience.

She reads everything she writes aloud, she says, and sometimes will record it and listen back too. At other times, getting someone else to look at the work can be helpful, she recommends.

"Getting other eyes on my work certainly is helpful, yeah."

There’s plenty of space for solitary endeavour too though, she says, while unpacking a first draft.

Winter is looking forward to reading the poetry submissions of ODT readers, of the poets of the South.

"I like that we have something like this going on, in our City of Literature too. You know? With our local paper. It is think it is awesome."