A world of experience

I was left with several main impressions from my experience at the United Nations. 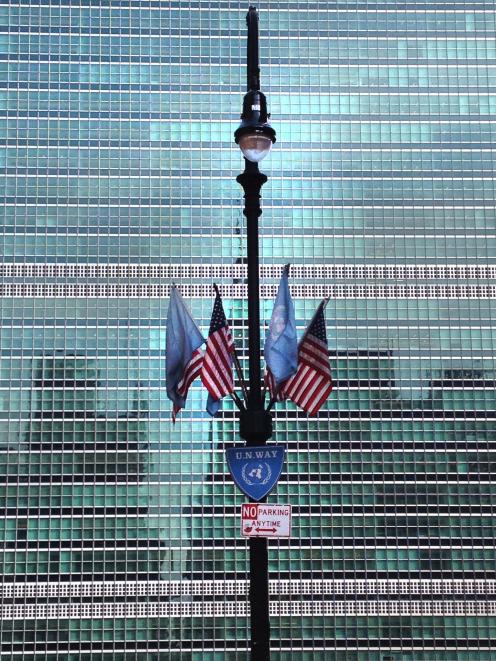 UN flags on a street lamp in front of the Secretariat Building at the United Nations in New York. PHOTO: HELEN SPEIRS

The first was how vast and complex the UN and commission structure is. I was also struck by how it has its own diplomatic language (words like transformative, aspirational, empowerment, inclusive and interventions were omnipresent). Learning the acronyms and abbreviations used was a lesson in itself.

Given the complexity and the numbers of people involved, I was amazed how efficiently everything worked; the behind-the-scenes activity to enable each strand to function was evident.

The work of the interpreters was incredible to watch; speakers' words appeared in type on big screens in the main commission venue almost simultaneously (albeit sometimes with unintentionally funny auto-correct errors).

I came to understand there was difficulty aligning the ideal of democracy with reality. I realised how, even at the pinnacle of global democracy and inclusion, and although there weren't the usual power dynamics at play, knowledge was power and therefore those who didn't understand the workings of the commission were at a distinct disadvantage.

Despite - and indeed perhaps because of - the wealth of written, online and practical information provided before and during the commission, most first-timers like myself with whom I talked felt like fish out of water. There was not the time nor brain space to fully comprehend the UN set-up, processes and terminology.

While women effectively had an equal voice there, some speaking spots needed to have been booked months in advance. It was also clear lots of negotiating went on behind closed doors and within established networks.

For perhaps the first time I properly realised how shut out people can be, even in a democracy. It helped explain the likes of low voter turnouts and made me even more aware of the vital importance of education (and of course why withholding information is a powerful tool).

Were all women's voices heard, and were all women represented then? No. Was that possible in two weeks? No. Will the Agreed Conclusions make a difference? Not in some countries and not in all areas and they are not legally binding.

Women I spoke to who had attended commissions for years say progress is still painfully slow and women are still fighting the same issues. Some governments will lead, some will push back and some will be shamed into following. That, however, is an important aspect of the power of the UN and the group dynamic.

The UN may seem largely symbolic, idealistic and aspirational. Even UN Secretary-General Antonio Guterres told delegates ``we can only act with the instruments we have; we cannot do miracles''.

Yet even symbolic moves hold significant power, and where there is global will, there is a way. For some countries even small changes may be

life-changing. While economic empowerment for many Western women may mean equal pay or representation on boards, in third-world countries it might mean providing a village well so women do not have to walk eight hours a day to bring back water for their families, and can stay at home and protect and educate their children.

Despite some of the horrific problems endured by the world's women that were discussed at the commission (sex trafficking, child marriage, female genital mutilation, even stoning in the 21st century, to name but a few) I was impressed by the positivity of the delegates.

It was refreshing to be in a female-dominated and driven decision-making environment. I found it overwhelmingly friendly, supportive, inclusive and non-competitive.

While I had largely expected that, I was surprised to find the same outside the UN. Every person I met (whether striking up conversation in a diner, confirming locations on the street or subway, or interacting with hotel staff, cabbies or street vendors) was friendly and helpful. I had expected they might have been sick of tourists, affected by the atmosphere of fear or prejudice, or simply too busy to notice others.

I left having had my own prejudices and preconceptions challenged on various fronts therefore, largely impressed by and wanting to learn much more about the UN, and determined to pay it forward and do whatever I can to champion the advancement of women.

I think it was a case of "mission accomplished''.