Worming his way to a new lifestyle 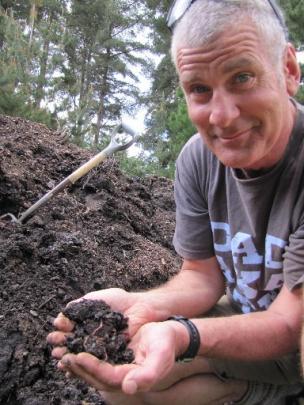 Wanaka worm farmer Lloyd Thayer gets down to earth. Photos by Marjorie Cook. 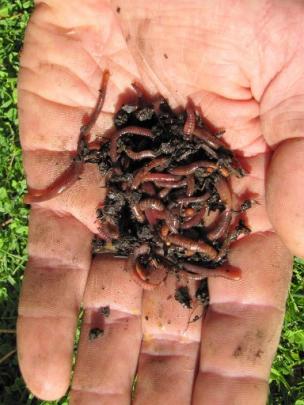 A handful of worms. 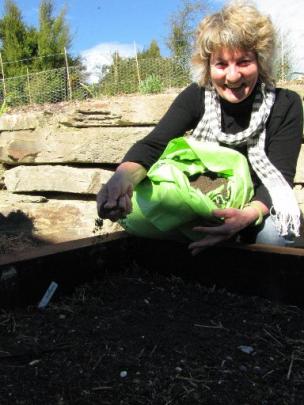 A change of lifestyle has seen a former West Otago farmer swap deer for worms. Marjorie Cook finds out how going back to the good life has worked for Lloyd Thayer.

When a group of tiddly Wanaka campers started talking about worms one Christmas about 15 years ago, Lloyd Thayer could not help earwigging in on the conversation.

One thing led to another and now the former West Otago deer farmer corrals millions of light-shy, tubular livestock in large compost heaps on leased rural land on the outskirts of Wanaka.

Mr Thayer (52) and his wife Anita have never regretted their 2009 decision to sell their farm at Merino Downs, near Gore, and move to a new life in Central Otago.

"It's quite a cool project. I found it just got easier as I went on," Mr Thayer said.

"I got into worms because I was staying at the Wanaka camping ground and having a few beers, sitting in a circle with some blokes.

"I overheard a woman, Shona Carruthers, of Mosgiel, talking about selling earthworms for $15 per kg in ice-cream containers. I wanted to find out how to get more worms on my farm," he recalled.

Mr Thayer was farming in an environmentally friendly way, without drenches and inorganic fertilisers, and wanted more worms to improve soil quality.

The camp ground conversation led him to Invercargill worm farmer John Withall, who got Mr Thayer going with large heaps of deer manure and sawdust left over from feedlots.

"He came up and looked at the farm and was salivating over the concept of using the sawdust.

"He explained, "You don't want one tonne of worms. You want 60kg and something to feed them and they will grow into way more than one tonne"," Mr Thayer recalled.

He paid about $4000 for his first worms and Mr Withall came back every week to monitor them and take their pH levels.

Within five weeks Mr Thayer had what he estimated as about 300kg of worm mass.

Worried his investment might crawl away, he initially wrapped the sawdust heap up in polythene but later moved the worms into a compost heap, which became a writhing 300-tonnes within three years.

"If they crawl away, where are they going to go to?

"John told me: "They've got 1km to go before they leave the farm but think of the good they will do on the way".

"I realised then it wasn't about putting worms on the farm. It was about not putting on super phosphate. And that's when I got really passionate," Mr Thayer said.

He ignored people who laughed.

"I have a theory. The weight of livestock you've got under the ground will equal the weight of the stock you carry on top. And we had some pretty huge stocking rates for our district.

"We should have been able to carry 14-15 stock units per hectare but there were times we could carry 23 or 24. It never dropped below 19," Mr Thayer said.

He brought just 100 cubic metres of seed material with him in 2009 - leaving heaps more vermicast behind - and started again.

"I am not doing those volumes here. I don't think I could find a farmer who would want it. Here, I am selling to gardeners."

But he could not begin selling straight away because his worms needed a couple of years to digest their new environment.

Now he has one large mound of screened vermicast ready for bagging, while new generations of fast-breeding worms are happily munching their way through a second massive pile of organic waste.

A third pile is in the making.

"We started selling on September 1. I don't think it could ever be a full-time job. But at this stage, sales are on the good side of what we expected," he said.

There have been no regrets swapping the deer farm for a more down-to-earth lifestyle in Wanaka because Mr Thayer now has the freedom to unleash some of his other interests.

He works winters at Treble Cone Ski Area, where he does maintenance, and summers at Criffel Peak Station, where he cuts deer velvet.

He has time to ski and ride his bicycle and is presently training for the Challenge Wanaka long distance triathlon team event in January.

"It has been quite a change. I lived there [on the deer farm] for 49 years. I was fourth generation on that farm. The wrench was not the decision to sign the contract, not the leaving.

"The first step, calling the real estate agent, that was the hardest thing to do," he said.

What is worm farming?

Composting is our effort to replicate nature's recycling system. As with all composting it is simply gathering together waste organic materials and mixing them so that worms and other micro-organisms can do their work. A wormery is a self-contained composting system that does not generate heat, and retains most nutrients for reuse.

In addition, the worm's digestive system imparts a stable crumb structure to the worm compost, which is a nutrient-humus rich material, consisting of partially decomposed organic waste, bedding material and worm castings (manure). Properly maintained it is an odourless system.

Why Compost With Worms?

It is an easy and fun way for people of all ages to recycle kitchen waste as rich compost. Try it!

• Problem-free worm composting can be undertaken all year around, both inside and out. The great advantage of worm composting is that it provides people who have limited space with an effective means of recycling their kitchen wastes. It requires only minimal space, effort and a little knowledge.

• Worms are fun! and make good pets for children.They are an excellent way to help children become environmentally aware, and are fascinating addition to any school's-science-environment curriculum.

• If you are a keen gardener you will already know about the many benefits of compost. Essentially, the addition of compost to your soil replenishes organic matter (humus) which, in turn, improves soil texture, nutrient content, moisture retention and encourages micro-organism activity and plant growth.

• Environmentally it makes good sense. It saves you money by reducing the amount of organic waste going to the landfill. It helps minimise the odorous rubbish bag and the associated hassle when this attracts dogs. It is a simple, cost-effective, natural way of recycling your organic kitchen waste, and conserves a valuable resource.

• Being a natural plant food and soil conditioner, worm compost provides the householder with an excellent high quality material particularly suitable for container growing, but equally as good for enriching the garden.

Addition of compost to our gardens is probably the best means of enhancement and maintenance of soil fertility in all aspects.