Back on easy street 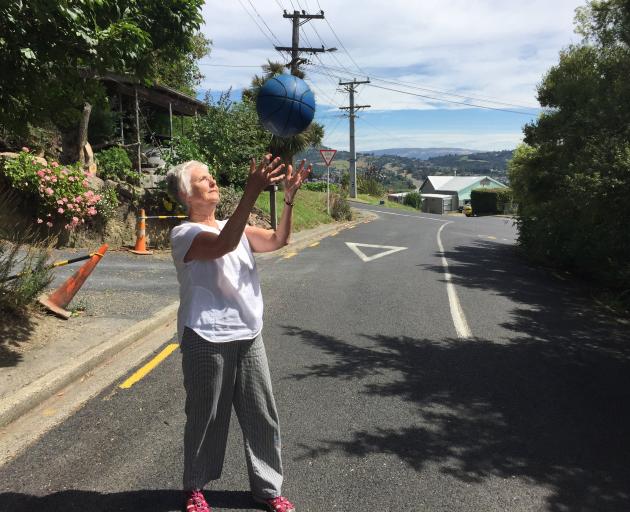 Green Island resident Donna Peacock plays in the street. Photo: Supplied
Retrofitting our streets to create human-centric towns and cities is the new "old" goal of urban planners. And it's about more than making room for cyclists and pedestrians, Maureen Howard discovers.

Back in the day "our street was our playground really", remembers Donna Peacock of her childhood growing up in District Rd, in Green Island, Dunedin. Peacock was born the year after World War 2 ended and in the 1950s she and her friends used to ride their bikes on the gravelled streets; children walked to school and ran errands.

"The odd car came along, and they were careful. And we had to look out for cars too. But there weren't very many," she says.

"In those days children did messages for their parents. There wasn't a fear of doing that."

That all began to change soon after, in Dunedin as elsewhere, as a "double whammy" resulted in streets becoming places for cars rather than people.

Industrialisation dirtied cities and the combustion engines it produced were used by the middle classes to flee to new suburbs. Work and home separated, especially for cities that had room to sprawl. Auckland and Hamilton ballooned; constrained hilly Wellington and Dunedin less so. 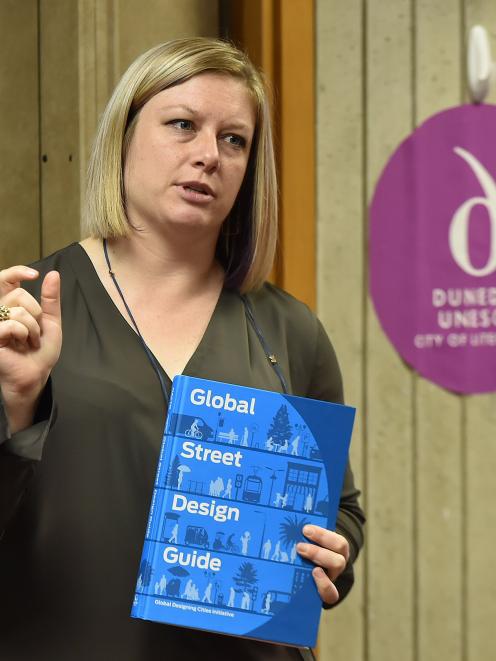 Crystal Filep
"Up until 1945 or so, Auckland had the highest public transport patronage per capita in the world!"

In New Zealand as elsewhere, traffic engineers built motorways and re-prioritised existing roads for cars. Efficiency was the mantra, and that meant moving cars fast and far. Malls and supermarkets sprang up on the outskirts of town. By 1991, the downtown area of Auckland was home to just 1400 residents, Campbell-Reid says.

If the downtown is the heart of a city, then the streets are its veins, he says.

And reprioritising our streets for people helps solve a plethora of social and environmental ills.

It is the vision Campbell-Reid is championing in the country's biggest city.

He is far from alone in seeing the importance of the work.

"We have these massive issues [such as obesity, road traffic injuries, climate change] that we have to address, and it turns out that they are all really closely interlinked," says Dr Alex Macmillan, a senior lecturer in public health at the University of Otago.

"The right of kids to get to school independently and safely. The right of people with disabilities who can't drive to access goods and services and employment. The right for people who can't afford to maintain a car to access all of those aspects of living in a city," Macmillan says.

Secondly, streets that facilitate active transport are good for us. In general, multi-modal travel involves increased exercise, which is associated with lower rates of obesity, heart disease, stress and other chronic conditions.

"Especially cycling, just because it gives you a bit more exercise and it enables you to go a bit further. In terms of high energy efficiency of travel, it's one of those amazing sweet spot interventions that bring multiple benefits."

"Cars can stop people being sociable," says Prof Claire Freeman, of the University of Otago's geography department, whose research focuses on urban planning and environmental geography.

Fourthly, by severing communities, car-dominated streets cost us all more. In the United Kingdom, Prof Jennifer Mindell, of University College London, is crunching data that shows the cost of "community severance".

It "probably costs Great Britain billions of pounds a day through effects on wellbeing, social capital, social exclusion and losses to local businesses", she says.

The final contribution a re-evaluation of our streets can make is around sustainability.

"The way we design, as well as plan, construct and govern our cities, will determine the future viability of the planet," Campbell-Reid says. 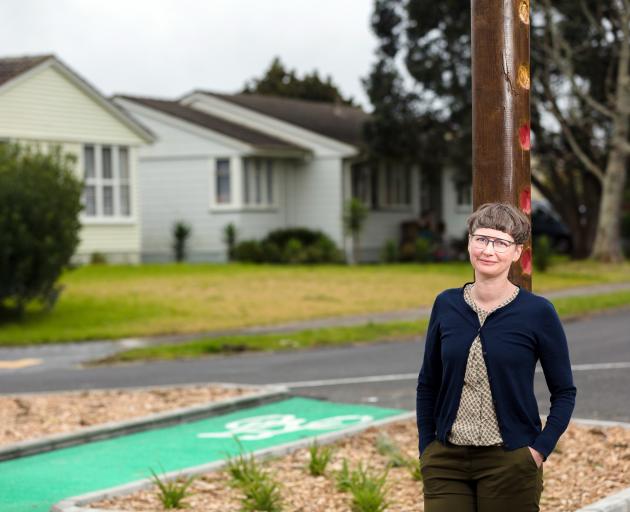 According to the World Bank, cities consume almost 70% of the world's energy and produce about the same proportion of anthropogenic greenhouse gases. How we design our streets contributes to the quality of the air we breathe; the quantity and quality of stormwater that runs off into waterways and oceans; an urban area's ability to support biodiversity; the appropriate balance of land use for homes, industry and food production; and the climate-changing effects that result from the mode of travel we use to navigate our streets. In New Zealand, road transport is responsible for 17.3% of greenhouse gas emissions.

To reap the benefits of making cities for people again, we don't need to take cars off all the roads. Prof Freeman believes some roads will continue to be car-prioritised but many could be returned to people.

"I think it's about deciding what percentage of the road you actually devote to whom," she says.

To reprioritise streets for people, she is clear that we need to widen the pedestrian part of the road "by narrowing the bit available for cars".

On the whole, our roads are wide and easy to retrofit, says Dr Macmillan.

"Transport planners from Europe in particular come here ... and they look at our streets and they go `There's so much space here!'."

"It's all about the speed and volume of traffic."

Fear of injury, noise and the "unpleasantness of high-volume, high-speed traffic cuts to the No.1 reason why people do not walk, cycle or scooter".

Lowering vehicle speeds and volumes, and providing wider and separated areas for walking, cycling, wheelchairs, mobility scooters, skateboarding and scootering, will bring greater perceived safety. Macmillan has one more sweet spot to add: if people are to be inspired to embrace the transition, we need to invest in beautiful walking and cycling.

Art, heritage features and trees are part of the beautification toolbox identified by the Ministry for the Environment in the New Zealand Urban Design Protocol (2005).

"You want your birds, you want your plants, you want all of that to be accessible throughout the journey - not just in one isolated spot or the other."

Ecological planting has yet to blossom, but people-centric design is on the rise. Examples in New Zealand include Oamaru's Victorian precinct; the Merchant Quarter in New Lynn, Auckland; the town centre revitalisation project in Kilbirnie, Wellington; and, in Dunedin, the warehouse precinct revitalisation project.

In Auckland, Campbell-Reid and his team of 60-plus staff have helped to transform the inner city of New Zealand's biggest city. About 60,000 people now "live, work and play" in the downtown area, which makes up only 0.08% of Auckland's surface area "yet generates something like 22%" of the city's economic output, Campbell-Reid says.

Internationally, New Zealand is playing catch-up. As far back as the 1970s, urban planners in the Netherlands began to retrofit roads to make them more accessible for multi-modal use.

"Some of the shifts that I see being talked about here in Dunedin in the last five years, are conversations that I saw happening 15-20 years ago in the States," says Dr Crystal Filep, who hails from Colorado and is now a lecturer in the University of Otago School of Surveying. A benefit of coming late to the transition, says Filep, is that New Zealand can learn from the mistakes that other countries have made.

While previously streets were developed for capacity around emerging technologies, such as trains, trams and cars, the new aim of the Dunedin City Council is "of finding the balance for all".

Streets should be for everyone, says Kathryn Ward, principal urban designer at the Dunedin City Council, who has been in the job since September last year. "There is just this hugely ambitious, exciting time for Dunedin," she enthuses of the city's CBD regeneration initiatives.

Ward has arrived at a good time to be part of "these once-in-a-lifetime improvements to the city", the first since development upgrades in the late 1980s.

The first of Dunedin's inner-city retrofits has involved the warehouse precinct, once a vital commercial centre of Dunedin that fell on hard times, but since its revitalisation has received international attention. It has included Jetty St pedestrianisation, for which council and building owners worked collaboratively to restore and reuse neglected heritage buildings. Now finished, Jetty St boasts spaces where people can stop and meet and contribute to the cafes and specialist shops that have moved in. 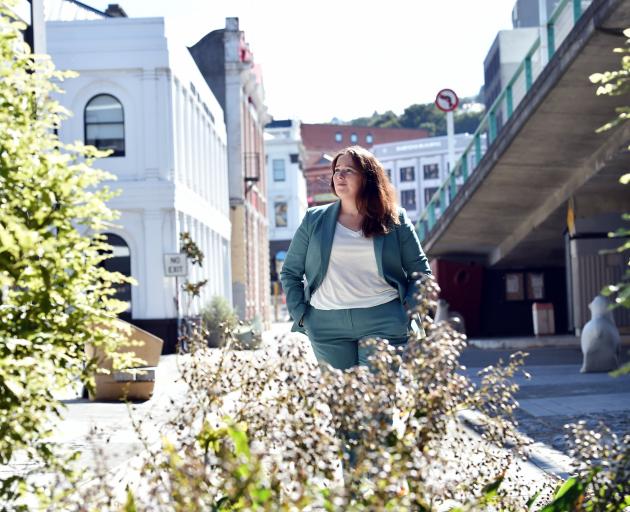 Dunedin City Council principal urban designer Kathryn Ward in Vogel St. Photo: Peter McIntosh
According to the DCC's central city plan, the warehouse precinct revitalisation is the first "quarter" of several inner-city projects that will revitalise the CBD. Once completed, the retail quarter, creative quarter, cultural and entertainment quarter, along with the warehouse precinct, will connect with the tertiary precinct, the waterfront, suburban centres and the Dunedin Hospital project.

"For me, the most important thing is to make those connections enjoyable experiences," says Ward.

An enjoyable walking experience could include looking at shops, glimpses of sky, views of landmarks, passing greenery, having opportunities to meet, and should be comfortable and easy with opportunities to rest.

"That whole footpath experience should be a careful consideration in the design of any city."

Dunedin is fortunate that many of its neighbourhoods did not lose their commercial and community centres with the rise of private car ownership. Neighbourhoods such as Roslyn and Mornington still provide a variety of shopping experiences as well as local utilities.

"You keep those neighbourhood centres where streets actually lead to something - then foot traffic is really good. But what you don't want is where it only generates it to a supermarket or big-box type store. It needs a multiplicity of uses and facilities at the destination," Prof Freeman says.

Dunedin's main street also ticks the box for the professor.

"One of the things that Dunedin has done brilliantly is that it's kept George St and resisted moving towards out-of-town shopping malls - that is the biggest thing that makes Dunedin work really well.

"It's been a deliberate policy [of the council] and they need to be praised for this."

Given the scale of the city, Ward appreciates the value of keeping everyone together to maintain the city's vibrant core.

The "retail quarter", that comprises George St, from Albany St to Moray Pl, is at present the focus of the second "quarter" of the Central City Plan.

Freeman is excited about the possibilities for George St and suggests that with the introduction of the new bus hub in Great King St, that this could be an excellent opportunity to make it car free - and plant trees along its length.

"Any other city in Europe would have done it."

Donna Peacock has made a submission on the retail quarter proposals with the Senior Climate Action Network (Scan), a climate change-focused community group she belongs to. Since its inception in 2014, Scan has been a significant part of her life. Like Peacock, many in the group are grandparents, and all want a safe future for young people. Lately, Peacock has also been attending meetings of Dunedin Pedestrian Action Network, a group that advocates for the needs of all types of pedestrians. Motivated by different but overlapping concerns, both groups are united by their desire to see streets returned to people again.

"It's about fewer cars, and more people spaces for closer communities, connected by public transport."